In an act of classic one-upmanship, BA has stolen back some of my heart. Not only did it welcome me with open arms and warm weather, but a few walking excursions reminded me what a unique and beautiful place this is and how much I will miss it.

In an effort to see everything I haven’t yet, I made an impressive to-do list and began my day by trekking out to Palermo again to check out the Japanese Gardens (Jardin Japones). After wandering a bit, I asked someone on the street and he told me where to go. It was the first place of the day that I underestimated. For only $8AR (about $2 US), I got to explore a peaceful park replete with cherry blossoms and exotic flora and a lovely Koi pond. The peaceful atmosphere was in direct contrast with the construction workers who were jackhammering a section of the wooded path, but grating noise aside, it was quite the aesthetic paradise.

Much of the grass was spangled with cherry blossoms or discarded flower petals, and every turn boasted some new and bright flower. What follows is both an ode to the park and an ode to my camera, which is unyielding in its brilliance. 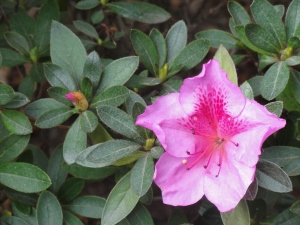 Like many of Palermo’s parks, the cityscape is visible in the background, which can either provide for some stunning landscape or serve as a reminder that alas, you are not in Japan.

Outside of the bridges over the koi pond and just beside the restaurant lies this lovely spectacle. I’m beginning to feel as if I’ve fallen through the rabbit hole: 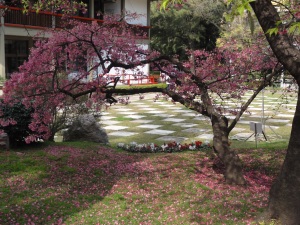 And if you’re somehow tired of all the flowers and the Lewis Carroll references, you can wander across the koi pond on a bridge that’s low enough to make you feel like the koi might leap up and pull you down into the pond with them: 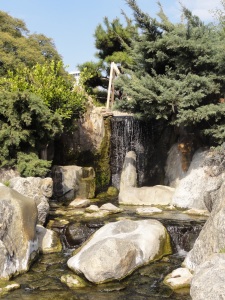 After the gardens, I walked to the nearby Museo Evita, a museum that pays tribute to Argentina’s beloved Evita. It was $10 AR to get in, and it’s a pretty navigable museum, with English subtitles in each room and excerpts from her own book to supplement the history that goes along with it. Her clothes are also on display, and the room detailing the mysteries of her post-death travels is kind of eerie and a little depressing.

Afterward, I ate at a pretty touristy parilla that was really nothing special, and then grabbed the subte to Plaza de Mayo. In the good ol’ days of protest and gathering, crowds used to amass here before the Casa Rosada to listen to speeches from someone like Eva Peron. It’s basically like our White House.

I had been told that every Thursday at 3:30pm, Plaza de Mayo is filled with men and women alike who support the Madres de Plaza de Mayo, or the Mothers of the Disappeared. From what I’ve found, they’ve opened to protesting and advocating for other causes, but the “founding line” still marches for the original purpose. During Argentina’s Dirty War, thousands of people “disappeared,” or were thought to be abducted and probably tortured by the government. Since their children disappeared, this group of women congregated at Plaza de Mayo to rally for their rights to be reunited with their abducted children. It’s difficult to fathom how it feels to suddenly lose your child and never find out what happened to him, and it’s equally difficult to watch them march with pictures of their lost children as their names are called out over a microphone. The mothers who march have their childrens’ names embroidered in their white headscarves, a symbol that is now painted on the bricks of Plaza de Mayo. Definitely a very intense sight.

I stuck around for a while before heading off, where I successfully haggled a hairband down a few pesos. I was a little bit proud of myself. After that, Moni and I headed back to Palermo to David’s apartment where we had facturas (little desserts) and later headed out to dinner.

The parilla we went to for dinner was ineffable. I can’t even begin to describe the meat. I figured since my nights are numbered, I’ve got to make them count, so I shelled out a little more cash than usual and I’m so glad I did, because it was worth it. We had water, a superb Malbec, and then David and I split some fried cheese appetizer before moving on to the main course, tenderloin. (My mouth is watering right now.) 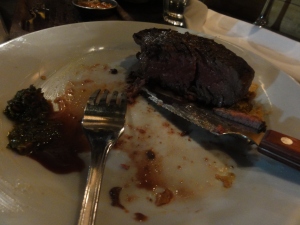 By far, the best steak I have had in my entire life. The meat, cooked about medium-rare, fell apart in my mouth. It might as well have melted. And I ate the entire portion allotted for me. They give you a sauce of herbs and spices, which I tried just to try it, and it was good. But there is nothing quite like the natural savory juiciness of meat. My mother would be in heaven down here, and I wish I could send some of this back home. I didn’t want parilla today, but now I do. I could eat an entire cow. With that said, I’m lucky my fabulous camera – which has a food setting – does this dinner justice. I went back to my apartment a very full and happy girl.