The town of Colonia, Uruguay is accessible from Buenos Aires by boat; it lies right across the Rio de la Plata, so BA is the perfect jumping off point for tourists exploring Uruguay. Buquebus and Colonia Express provide both high speed and regular ferry service throughout the day for affordable prices. In fact, while many people take boats to Montevideo, Uruguay’s capital, it’s cheaper to boat on over to Colonia and hop a bus three hours to Montevideo.

After arriving home after midnight from Iguazu, I wasn’t happy about waking up at 7 to get the ferry to Colonia. But it was worth it. There was a beautiful sunrise over Buenos Aires as we sat on the giant ferry waiting to begin the one-hour trek (it was a high speed ferry) to Uruguay. 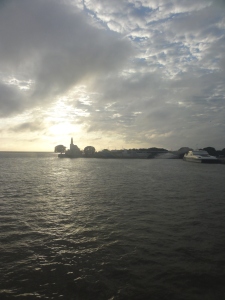 Colonia really is a town true to its name. With cobblestone streets and a quaint row of shops and restaurants, it emits that old-fashioned vibe of laid back, small-town living. Lots of people check out Colonia because it’s chock full of duty-free shopping, but it also has a really nice little coastline that reminds me of Sandy Hook and what I envision Ireland must be like. It’s so green. 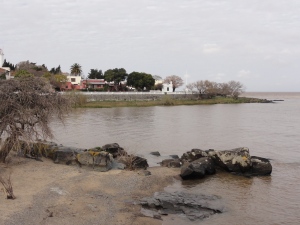 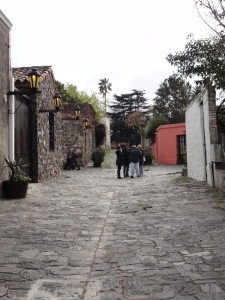 After exploring Colonia for an hour, I decided to take advantage of being 25 and rent a car to see some of the Uruguayan countryside, cattle, estancias, etc. Lonely Planet had advised Thrifty rental cars, but the man at the desk literally laughed at me and said, “You want to rent a car for 3 hours? No one here in Colonia will do that.” Downcast, I left and was going to discard the plan entirely except I really wanted to see the countryside, so I hopped over to another place and, despite some laughter, signed the papers for a little VW. I somehow made it out of town safely, realizing as I did that the language on the traffic signs was incomprehensible to me but the drawings were meaningful at least, and soon the road stretched out for miles into the greenest grass I’ve ever seen. 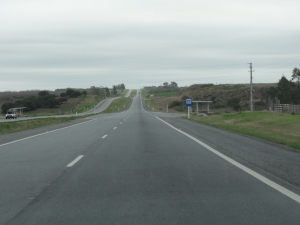 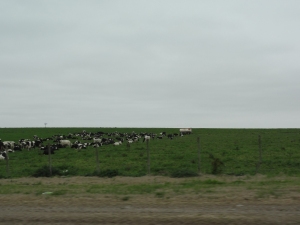 I returned safely to Colonia after taking more pictures, and then tried to find a restaurant acclaimed in my Lonely Planet. Unfortunately, it was not where it should have been, and when I asked someone in Spanish where it was, I thought he replied that it was under a new name and on that corner. He spelled out the name of the place, which I’d already walked past twice, so I went in and happily ordered some wine. I then perused the menu to find that, alas, this was not the place with the tasty lamb dish. It was some dumpy joint that served fries with mushrooms atop them and a platter of bad-tasting ham. To make matters worse, the credit card minimum was $500UR (approx. $25 US), but I can’t complain. I sat there hiding the ham underneath lettuce leaves to make it look like I’d eaten all of it, thinking of how really, I have no one to blame but myself; if you’re going to travel, learn the language. And not just the basics.

I took the Buquebus back to BA where I spent my last night with Moni, David, David’s girlfriend, and his friend at a pretty good parilla in Recoleta and afterwards at a late bar, walking home with them at 3am when the streets were totally empty.