September 11th marked the first day of school here in Cairo, and the start of the longest workweek I’ve experienced in a long time. We logged some heavy hours at the school on Saturday, from 9-5, and then got up to start all over again on Sunday. It wasn’t until school was actually in session that its chaotic disposition came to light. Disorganized lines, a non-functioning bell system, a lunch room with garbage bins the size of Gatorade bottles, and a secret first period no one had told us about until five minutes before. I thought my previous place of employment was disorganized; this school puts North to shame. In its defense, it is a newbie as far as schools go. It’s not even two years old, and at least one month of its first year was nonexistent due to the revolution. Simple tasks – like using the photocopy machine on your own or obtaining supplies – are designated to matrons, women who patrol the hallway and run errands for you. Many of them are awesome, but some of them move glacially, and I can’t help but look for the ball and chain that must be dragging along behind them. The English Department matron is very sweet; she taught me how to say good morning and lunch. Is salaam ‘alaykum generally functions as a common greeting. I’m anxious to see how things progress here this year.

I teach grades 6 and 7, and a class of SAT prep that was added a week ago at dinner. Still, the 10th grade SAT prep is like a breath of fresh air. Each day in the middle school classes, I spent 80% of my time reminding the kids to raise their hands, and I assure them that I will see them, so they don’t have to shout “miss!” breathlessly and urgently. Today I told them that until they can handle this, they have to raise their hand and cover their mouth at the same time. They seemed excited. They also materialize next to me at random and unpredictable intervals. I will be addressing a question, and I’ll turn to the board and there they are, less than an inch from me, asking me what a homework pad is or something else basic. I’ve begun ignoring the students that do this, and calling on the quiet ones who raise their hand, showering them with praise and adoration. Positive reinforcement, right? I also have a hard time understanding them, and them me. I spent half a period yesterday explaining the concept of either/or. “You can purchase a binder OR a five subject notebook.” “But Miss, what if we have a binder already?” “Then use the binder.” “But what about the five subject notebook?” “If you have a binder, you don’t need one.” “My mom has a folder at home, and a dog.”  “But Miss, what if we only have a five subject notebook and not a binder?” What if I scream very loudly and bang my head repeatedly against the SmartBoard? Still, I can’t be too hard on them. And they are very cute, most of them. The tenth graders are quiet and fun. I can be sarcastic with them and the meaning isn’t lost. Thank God for high schoolers.

It’s customary to hire a maid, especially when you live in a palace like ours. Dust particles are expert at hiding in every crevice of your shoe, and in minutes your tiled floors are covered. The school has black floors, and dust footprints accumulate so rapidly that the matrons spend their free time sweeping the floors. Seriously. So we hired a maid, a woman from Sri Lanka that we all sat down with and negotiated a price with. We asked her if she did dishes, and she said, “By hand?”  “Yes.” “Oh, no no, we don’t do that.” “But…you won’t wash dishes?” “No.” Exchange of puzzled looks. “We do have a dishwasher.” “Dishwasher? Oh, I thought you meant wash, laundry!”

Anyway, she turned out to be fantastic, and I mean fantastic. Not only were the floors immaculate, but my desk had been cleaned and my items reorganized and aligned perfectly with the desk edge. This was nothing, though, when I saw that she’d actually pulled the hair out of my hairbrushes. You think you see some surprising things in your life, but that was as shocking as shocking can get. She will come every Monday.

Thursday the 9th was Ashley’s 24th birthday, so we went out with Blanca and Ashley’s friend Ahmed and his friend Osama (“Not the bad one,” they assured us). We drove along the Nile and hit up this club that was supposed to boast some karaoke but didn’t, so we headed over to a hotel that literally sat on the banks of the Nile and danced the night away. (One song that is extremely popular at all of the dance clubs here is Shakira’s “Waka Waka.” You get used to it.) What was cool about this night – and really any night spent on the Nile – was that we drove through Tahrir Square where protesters had been congregating earlier in the day and still remained. Later, as we sat at dinner, Osama and Ahmed both received calls from their parents informing them that the Israeli Embassy was being attacked. “You might get to see something,” Ahmed told me. Luckily, we didn’t, although Susannah stressed that the embassy is only a few blocks from our home. And so concluded our first trip to the Nile. 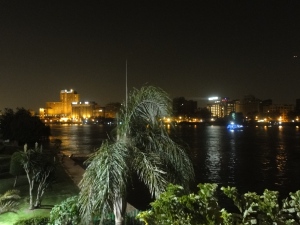 Egyptians are very friendly. What I find a bit uncomfortable is walking in on people praying. I like the prayer times (which sometimes wake me up at 5am when the Call to Prayer echoes throughout the city), but during school hours if I knock on an office door to get a list signed or to use a computer – we don’t have our own – and find the administrator praying, I feel horribly disrespectful and even a little embarrassed. I usually pace the hallway or examine cracks in the wall outside until I’m fairly certain they’re finished praying, and then I try again. It really is an awful feeling. I suppose I could avoid it if I use the “Prayer Times” feature on my phone, so then I’d know every time it was prayer time. You can hear the Call to Prayer at the school, but sometimes I think people pray just to pray.

About the Drive to School/Anywhere

Driving in Egypt is almost as bad as driving in India. The only difference is that drivers in India don’t mind trying their luck going against traffic, whereas drivers in Egypt play it safe and remain on one side of the road. Still, there are no lane markings, no stoplights, and no posted speed limits. Drivers fly along at breakneck speed until a speed bump arises, and they slow to a near stop before hitting the gas again once safely over. Horns have become a part of daily life; everyone honks horns to notify people entering a roundabout or simply trying to cut over without using a turn signal that they are there, they exist. Up until Sunday, our worst luck was with cabs. Cab drivers often don’t know where they’re going, and I get it, Maadi is a labyrinth of a city. But we have taken to bringing a large roadmap with us to show cab drivers where to go, and usually they don’t understand us. I can say “left” (shimaal) and “right” (yimeen) but that doesn’t help when trying to say you need to get to Road 250. One driver gave us his phone and asked us to type the number in, and it showed up in Arabic. You do what you can. (It should be noted here that I learn my words visually or by reference. Shimaal sounds like “Schameel,” from the opening song in “Laverne and Shirley” and Yimeen sounds like a poor pronunciation of Yemen. Ma’is salaama, which means goodbye, reminded Ashley of a llama exiting a building, and it stuck.)

Our driving luck went downhill on the first day of school when a new bus driver attempted to take us all home and instead drove us around in circles for, not kidding, two whole hours. We rolled into our apartment at 6pm completely drained. I am fairly certain we skirted the Libyan border at some point, or that our driver was hoping to arrange a mugging down one of the dodgy alleys he drove us through at least three times. He was fired, they said, until he showed up the next day to drive us home with our principal navigating.

I am a firm believer in the concept illustrated in The Alchemist. The universe totally listens, and if you follow your dreams, they’ll be fulfilled. (Cue Disney song.) On Thursday night, Ashley and I sat at the Ace Club, an exclusive, elite club for Expats living in Cairo that we aren’t actually members of yet, and I told her how I wanted to join a rugby team, and how the only thing I miss from home – besides friends and family – is running outside.

The next day, after a long day of errands and me being in a writing groove, Ashley’s landlord called and asked her to come see the apartment and pick out a paint color for her wall. No one felt like going with her, me included, but I felt bad so I accompanied her, pending that it would be a quick trip. We arrived, the landlord showed us the room, and then he suggested we visit a different apartment of his to see the paint color. I was a bit disgruntled with this, but we headed down the street and up to the apartment where we came face to face with a British guy our age. My shock at seeing a non-Egyptian, English-speaking face was comparable to that of finding no hair in my hairbrush. But it only got better.

His roommate emerged, and we got to politely talking until I noticed a pair of FiveFingers by the door and asked whose they were. Turns out, the roommate runs outside pretty frequently, at some place away from traffic. We talked about running barefoot and he used the term “heel-striker,” which instantly raised him a few pegs in my book. He told me about a relay-esque race he’s done by the pyramids and asked if I wanted to join up with a team. Overwhelmed with the random luck of our meeting, I said yes. As he wrote down my e-mail and phone number, he said, “Ya know, if you’re athletically inclined at all, my girlfriend is always recruiting for her rugby team.”

This is the kind of stuff that floors me. Ashley’s landlord left us there (I think he planned the whole thing), and I’m currently getting ready to go with this girl Valiha to my first rugby practice.

Koshary is heavy, sherwarmer is everywhere. It’s not bad, but it’s not all that exciting either. If you buy vegetables and fruit, you have to wash them with bottled water. Some people drop tabs into the water to cleanse it, but we’ve been risking it. And no salads for us, because apparently lettuce is bad right now. I spent a solid five minutes or so picking it out of my chicken wrap, and the school director remarked to a passerby that he’d be at the meeting after he picked the lettuce off his sandwich.

Egypt is not entirely unstable. It’s weird passing Mubarak’s trial on the way to school every day, but it’s so interesting to see police on horseback, police with riot gear, and tanks in front of the Police Academy. We were unaffected by the riots at the Israeli Embassy, but until elections happen and someone is officially in power, we’re in a state of limbo here. Which is okay right now. At least I hope.