Turkish Delight on a Moonlit Night

We wake up to Ayasofya’s buildings and rooftops mildly dusted with snow, but our unparalleled excitement is reminiscent of schoolchildren waking on a Monday morning to an imposing foot of snow on the ground and a phone call officially canceling school. After eating breakfast, we’re now bundling and preparing to hone our haggling skills at the Bazaar. But the best part of the morning so far has been the small sprinkling of snow outside.

preparing for a snowball fight!

The Bazaar went well. Susannah’s haggling got her a free bowl and I got everything I needed for well under my budget. After, we headed home to prepare for the Turkish bath (or hammam), an experience I was both eager and fearful about trying. Rebecca recommended a less aggressive hammam in Çemberlitaş, a brief cab ride away from our hostel. (The hostel, Hotel Sultans Inn, was located on Kucuk Ayasofya Caddesi, and was in walking distance of just about everything. Worth staying it, very cozy and quaint.)

I’ll avoid providing too much detail. For those of you who are unfamiliar with the concept of a Turkish bath, look it up first and figure out if you want to read this.

We went in and were given red plaid towels and disposable black bikini bottoms. I paid for the self-service, thinking the scrub sounded a bit painful. But after lounging on a steamy slab for fifteen minutes and being shown a dumpy little room with a pitiful looking faucet, I figured why not just go ahead and do it for the experience. And there are few experiences that compare to enjoying a Turkish bath in the company of a half-naked woman who looks like Jonah Hill.

The place itself was something like a spa, so I indulged in my first-ever professional massage. It was a warm, relaxing contrast to the bitter cold that greeted us outside. We ate Döner kebab at a place nearby before roaming the frigid, slushy streets back to the hostel. I’ve just had coffee, biscuits, and cracked an Efes beer. Outside, the snow is still falling and I’m toasty. We’re off to see the Whirling Dervishes later on, then home to Egypt tomorrow.

The Whirling Dervish show was about an hour long and took place at the Hodjapasha center, a quick cab ride away from our hostel. It wasn’t so much a spectacle as it was a ceremony; there was much bowing and chanting, and the whirling portions of the ceremony were impressive not only for the physical whirling, but for the peacefulness that many of the dervishes seemed to attain by whirling. If you read up on the history of the Mevleva ceremony, you’ll find that it’s mainly about reaching a sort of spiritual nirvana. And if you’ve ever spun around in circles for even fifteen seconds, you know how dizzying and nauseating it can be. So imagine people whirling at increasing speed around a central point for a half an hour and feeling serene about it. Pretty impressive. Apart from an older gentleman, the rest of the dervishes seemed to whirl in harmony. I kept waiting for physics to take over, for simple harmonic motion to mandate one of them to spin out of turn, but even as they revolved they remained synchronized.

at the dervish show, waiting

After the show, we ate Turkish Delight. When I taught in Croatia, my cooperating teacher gave me some, and I thought it was repulsive. I figured I’d try it again four years later in Turkey, but found that it is still pretty nasty. It’s a strange gummy consistency with powdered something on top of it. Nothing delightful about it.

susannah and i before the show

The next day, we sadly parted ways with Istanbul. But for those of you who know me and are familiar with my travel experiences, you know that no trip is complete without encountering a certifiably insane person. It was just after we passed the first security checkpoint at Ataturk Airport that we heard him. A loud, pretentious voice pierced the silence: “I am Egyptian!” We turned and spotted a harried-looking Egyptian man peeling off his red and black leather coat as he passed through the scanner.

To say he was potbellied would be a vast understatement; Shannon accurately pointed out that he looked as if he were entering his third trimester of pregnancy. He had a lopsided smile on his face that screamed “Something is not right with me!” and reminded me of someone who might live in an asylum and eat spiders. To top it all off, his hands and fingers were draped in tacky gold jewelry that gives a new meaning to bling. Think Bram Stoker’s Renfield character meets Jay-Z:

He boarded the plane after us and immediately began to badger a poor Asian man, shouting that his bag was in the wrong overhead bin and to move it immediately. He spoke to the Asian man the way someone might speak to a rock – with conviction that you are some superior being and knowledge that the rock isn’t going to move. We pitied this poor Asian man who acquiesced and moved his bag. But this wasn’t enough for “I am Egyptian!” He then began to shout at a different man for taking his seat. When a flight attendant finally approached, the deranged Egyptian man graciously offered to stand in the back while everyone else boarded the plane.

Acting like a lunatic d-bag (pardon my French) earned him a better seat on the plane and, apparently, free reign of the aircraft. He roamed the plane freely, helping himself to water if he felt like it and ordering the flight attendants around. I kept waiting for him to stand up and do something rash, like break out in song (which is a euphemism for endanger our lives). When the plane finally completed its terrifyingly long and bumpy landing process, he was the first to clap his hands noisily together and shout, “AYWA!” before unbuckling his belt – literally as the wheels touched the runway – and galloping/stumbling up and down the aisle.

We observed him in his natural habitat at the Cairo Airport and realized then that, without a doubt, we were back in Egypt. 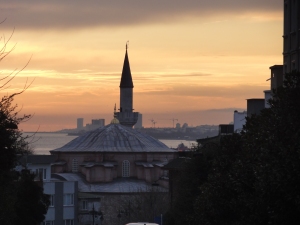