As an obsessive recycler (my school back home didn’t recycle paper, so I’d save boxes of it and cart it off to Kane’s Lane each month), I was horrified when I arrived in Egypt and was told to mix my bottles with the trash. Even now, my roommates and I keep our empty water boxes for recycling and place the plastics in a separate bag. There is something completely taboo about tossing a Coke can in with your napkins, even if it’s what you’re supposed to do.

I was venting to a friend about this a few months back.

“No, it gets recycled,” he said. “There are people whose job it is to sort the trash. They live out in Garbage City.”

I did not believe him for a second. People sorting trash? In a place called Garbage City? Come on now. I dismissed the idea until I got back from Greece in November and attended a rooftop charity event where the proceeds went to purchasing school supplies for kids living in Garbage City.

Since November, I’ve heard mention of the place on numerous occasions, and my friend and coworker Rebecca invited us to go out there with her today to the Association for the Protection of the Environment (APE), a broad acronym that encompasses a multitude of programs for people living in Garbage City.

I wasn’t sure what to expect. How do you prepare for a trip to a place where people literally live among garbage piles? All I’d been told was to bring money, because there were things to buy. Even this was a very vague statement.

We left our comfortable bubble of Maadi and were dropped off on the side of the Autostrad. Now, I’ve ventured out of my comfort zone many times during my stay here, but this has to be one of the most jarring. As we stood waiting for a microbus to pick us up and take us into Garbage City, we were surrounded by consuming poverty that we are usually shielded from in Maadi. Garbage spilled in massive piles down into roadside ditches; poorly-attired children threw rocks and old electric socket covers at us while making vulgar gestures; men attempted to maneuver donkey carts full of vegetables and bread around honking cabs and trucks. As five white females, we received myriad uncomfortable stares and even accrued a small audience. To say I was out of my comfort zone was an understatement; I felt more afraid and anxious here than I did in Tahrir Square on Election Day.

When the microbus finally arrived, we practically climbed over each other to get in. Our friendly driver took us up dauntingly steep and narrow streets into the back alleys of Cairo. This was a place similar to the Khan el Khalily, minus the tourist factor; shopowners sat on upturned crates and children ran alongside the bus waving and shouting at us. It was a twenty minute cab drive from Maadi, but it felt like a world away.

APE was located at the top of the hill or in the Mokattam, where, according to the website, almost 25,000 people reside. We were first led through some rooms filled with old fabric and sewing machines; women made rugs on looms as we stood in the doorway and listened to our friend Jen translating the information our Arabic guide was telling us. The fabric, we learned, was being recycled, and women and girls were being taught skills such as sewing, weaving, designing, cutting, and, obviously, recycling. While it doesn’t seem that impressive at first, the magnitude of the initiative is pretty outstanding.

women at the loom

The people living in Garbage City are called the zabbaleen, and work with the 40% of Cairo’s trash that isn’t collected formally. Of the 25,000 people living in the Mokattam, about 90% of them are involved in collecting garbage or working with it.

Consider the fact that Cairo is a city of 80 million. According to the website, that’s about 7,000 tons of garbage every day, and up to 90 percent of that waste is recycled by the zabbaleen directly. Bottom line? That’s a lot of garbage. And unlike garbage collectors in the US, they’re not paid for the work they do. This is where recycling comes in; they sort the garbage, and use some of the 90 percent they recycle to make goods to sell. 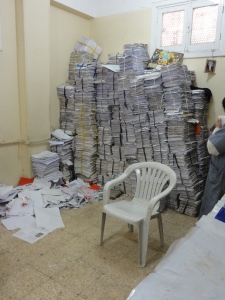 piles of paper for recycling

This might sound questionable at first. What kinds of products are we talking, here? Who wants to purchase something made from someone else’s trash?

The truth is, this concept isn’t new. In fact, the western world is already jumping on the “upcycling” bandwagon in an effort to be green. A few months ago, I wrote an article about Terracycle, a recycling plant in Trenton, NJ who was partnering with the North Face to upcycle (the art of recycling goods into new, usable products) packaging bags. The difference between the trendy green upcycling of western society and the upcycling going on here in Garbage City is extraordinary and really emphasizes the disparity between a place like the Mokattam and somewhere like Princeton: here, upcycled goods are sold for almost nothing as a means to live on. In stores like Green Design in Princeton, who purchase and sell the goods manufactured at places like Terracycle, products are expensive; the consumer base for a store like Green Design seems to be the liberal upper middle class.

What I’m trying to say is that in the States, it’s a trend; here, it’s a lifestyle.

So when we scoured the shop for upcycled products, we were shocked to find beautiful, handmade rugs at 35 LE a piece (something like $7 US). Compare that to a bag made from upcycled Capri Sun pouches that’s selling for nearly $15 on Terracycle’s website.

After watching the women on the loom, we were greeted by Nicole, a French woman who moved to Egypt 37 years ago and is married to an Egyptian man. She told us she’d been involved in APE for 18 years as she took us to the next room where women were working on products made from recycled paper. Here, women rolled up old pieces of magazine and newspaper into tightly-wound spindles that almost looked like beads. From this, they made earrings, bracelets, and necklaces.

In addition, the women made beautiful stationary from all sorts of paper products; Nicole held up a stiff, crisp, blue card whose color was drawn from pieces of denim mixed in with the paper. Some of the cards even included pressed flowers. A high-quality card with a flower woven onto the front was sold for 3.50 LE, less than $1 US. Everything in the store boasted the same quality; there were colorfully woven pictures of camels mounted in wooden frames, hanging lamp covers, marble-colored stationary, and countless gift bags.

After learning about the recycling process, we were shown to the small school on the premises. For me, this was the most hopeful and humbling aspect of the center. The website mentions that most zabbaleen children have not had access to formal education, and schools were not part of the garbage settlements; children are expected to work with their parents to help sort waste or help gather trash on collection routes. According to the website, in 1997 it was “estimated that of the youngsters aged 12 to 14, 66 percent of boys and 59 percent of girls were working.” This left little or no time for education.

As a teacher with experience in middle class schools and now at a private school that charges tuition, I’m spoiled with access to the newest technologies, air conditioning and heating, and a plethora of supplies. Walking through the classrooms at APE was an eye-opener. These were one-room classrooms with old wooden desks and chairs, chalkboards, and tiny windows. Each classroom was painted a bright color, and children sat at their desks waving as we passed. A woman walked past us with a tray of bowls containing hot noodles for the kids who were eating lunch at the time.

It was cold and a bit rainy, and many of the classrooms were open air with unobstructed doorways and open windows. The more we observed the smiling children and the simple classrooms, the more I felt completely touched by the ambitious programs set forth by APE. The literacy program targets 4-6 year olds and provides them for mainstream schooling, though classes are also offered to school drop-outs. And, according to Nicole, it was working.

In addition to feeling humbled and touched, I felt guilty. My school provides obstacles and serious frustrations every day that impede my ability to teach, but I should be grateful that I teach at a school that’s fairly well-equipped with supplies and classrooms for our students, who show up every day in their uniforms with their prepared lunches and tales from their weekends at the club. The children at APE, Nicole explained, pay a monthly tuition of 10LE – that’s a little over $1USD.

“It’s there so they have something to work for,” she told us.

The pinnacle of our trip to APE was a visit to the nursery, where women tended to the children of working mothers. Here, we actually witnessed the result of the program firsthand. Nicole translated for one of the women, who told us about her five children, the oldest of which is attending university. She, too, wants to attend classes; because her daughter was able to do it, she wonders if she can, too. Although she was speaking in Arabic, her face was full of pride and excitement as she spoke of her children.

playground through the fence

We left, our hands full of bags brimming with upcycled products. Writing about this experience has been hard; it’s hardhitting in many ways, and I don’t feel as if I even have the authority or the depth of opinion or knowledge to weigh in on my experience today. I’m barely an observer, and the trip almost felt voyeuristic as we snapped pictures of children in schoolrooms and women crafting jewelry from recycled paper. And while I’m glad that my money went to a good cause, it’s still difficult to look at the products I purchased and think about where they came from and how their sale is sustenance for the people who made them. In the end, though, it’s optimism and progress that really set the tone for the trip; the APE program has really transformed Garbage City and created opportunities for people who, years ago, had no opportunities. The fact that 250 children are enrolled in the school and women are being educated and empowered through trade and work is certainly testimony to this, and it truly highlights the hope, possibility, and accomplishments of the program.