Shar in Egypt, Part IV: The Egyptian Museum and Pigeon

On the last day of her visit, Shar and I headed into Tahrir Square to visit the Egyptian Museum with Shannon, Susannah, and Rebecca. Despite having lived here for as long as we have, none of us had actually gone to the museum, so it was an exciting first time for all of us. Shar got to experience the metro – a unique experience that involved me getting my hair pulled – and we successfully disembarked at Tahrir Square, where the effigy Simon and I photographed on election day still hung.

The museum’s exterior reminds me of the Casa Rosada in Buenos Aires; a cheery pink paint job combined with stately pillars and stocky palm trees makes it almost look like a garden mansion. Once inside the gates, it becomes obvious that, should this be a garden mansion, it is no ordinary garden mansion. Between palm trees and fountains stood stone sphinxes, statues of long-gone kings, and pillars ragged with erosion. We couldn’t figure out whether the statues were cheap replicas or actual artifacts that didn’t have a place inside.

After some debate, we hired a guide and were instructed to leave our cameras in a safe box outside. Hesitant, we asked the guide if there was another way.

“You can hide them in your pockets. Your bags must go through a scanner, but they will not search your body,” he told us. “I am an Egyptian, I have to act like one.”

We immediately liked him and followed him inside. What followed was a somewhat long two hour tour replete with historical facts and information that could very well serve as the plot for a “Sparta”-esque television show, as Sharlene put it. There were kings who united the country, kings who married their cousins, kings who married 40+ women. And, of course, there were powerful queens.

We learned all about the statues, and how the left foot is always a bit forward because it acts as the first step the deceased will take in his/her new life. This was one small fact among many that I found to be exceedingly interesting.

At one point, we came to a bust of Nefertiti, whose name translates to “beautiful woman coming.”

“Some say that Nefertiti was not Egyptian, because she was beautiful,” said our guide, shaking his head. “But this is not true. Because Egypt does have some beautiful women.”

He then led us to the next room, where he explained that Ramses II – the one with 40+ wives – had over 100 children. (He was also the inspiration for the Percy Bysshe Shelley poem “Ozymandias,” a fitting tribute that stuck in my head throughout the trip.) Before the shock could set in, he showed us a case displaying all sorts of clothing and accessories from Ancient Egypt, including socks, sandals, jewelry, and various forms of birth control.

“They’re having 140 children, when are they using the birth control?” Shar whispered. It was a good point.

Of course, we couldn’t leave the museum without seeing King Tut and the mummies. We learned all about how, at 19, he fell off of a chariot and broke his leg, which led to gangrene, which in turn led to his death. We also learned, in detail, about the mummifying process, which usually took about 72 days. It was upstairs that our guide again reminded us of the looting during the revolution last year.

“Pieces were stolen from these exhibits,” he’d tell us as we progressed on our tour. “They came in through the upstairs windows, came up the fire stairs. I don’t know where these stairs are, and I’ve worked here since 1985. I don’t know of any stairs. They broke the window and came down on ropes, and only certain pieces were taken. It had to have been someonein the museum. Three were arrested. But the ministry kept saying that no pieces were taken from the museum, when really, almost 80 were missing.”

Among the missing pieces were small statues, jewelry, and mummies. He gestured to the mummies in one room and two empty glass cases.

“These were two child mummies,” he said, “but they were stolen.”

Because who doesn’t want a mummified child of their own?

Susannah explained that oftentimes, stolen items appear on the black market and museums have to re-buy them. How horrible.

In the end, I was very glad we got a guide. I have tons to write about in terms of what I learned at the museum, but that will be for a later – and much longer – entry. I’m fascinated at how well preserved everything is, how you can look at a sandal worn by King Tut, you can see the bright color of lapis lazuli shimmering on a stone, you can view the actual chariots on which they rode, all thousands of years old. And it’s amazing that so much is preserved and in good condition, and that artifacts are still being found. One piece, a tall statue, was semi-recently discovered. The bottom half is faded, though the engraving of the hieroglyphics are still visible. The top half, being submerged in the sand while the bottom half was exposed to sunlight, still bears the hieroglyphics in their original colors. Amazing.

We were all pretty tired by this point, so Shar and I headed off to Abou el Sid, the restaurant where I experienced my first ill-fated run-in with pigeon. I ordered us the whole gamut of Egyptian food, which was far too much, and finally got to try pigeon. 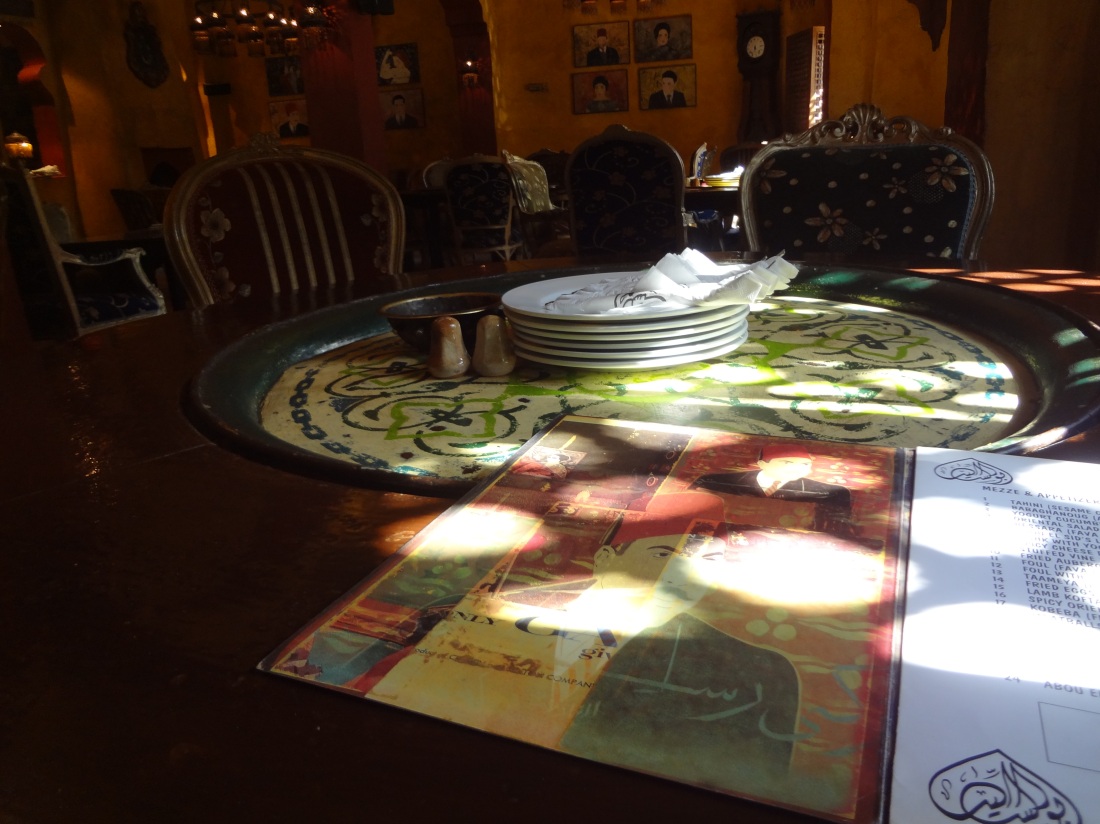 It was not very good.

There’s not much meat on it, and the rest of it is a bit oily and, unsurprisingly, tastes like chicken. The foul, tameya, and koshary were all up to standards though.

It was an exhausting but fitting end to Shar’s trip to Egypt, and I did not look forward to sending her off the next day.