It’s been said among many expats that weight gain here in Cairo is inevitable. Eating healthy is difficult. Food always tastes a bit off. It’s hard to come by down-home meals, proper burgers and steak and mashed potatoes. Many a time, after dining out, there is much head shaking and wistful sighing.

“They just can’t do enchiladas right,” you or your companion may bemoan.

On the one hand, it’s awfully foolish to harbor such high expectations for poor ol’ Cairo. How can a country that doesn’t even have a government be expected to whip up authentic Mexican dishes? But sometimes you just can’t help but long for fish ‘n chips or quesadillas the way your favorite watering hole back home throws them together. Especially when it comes to desserts.

Craving some creamy cheesecake? Instead, get a taste for a hardened circle of crusty cream cheese.

Dying for a warm brownie and a scoop of ice cream? How about a semi-stale chocolate brick steeped in soupy vanilla bean?

Fortunately for us – not so fortunately for our waistlines – there’s Crumbs. Just down on Road 9, modestly nestled beside a waffle/shawarma hybrid beneath the Red Dragon flyover is a quaint, cozy cupcake shop. An icy refuge from the oppressive Cairo heat, Crumbs boasts a bold pink interior and a wide variety of cupcakes. And I don’t mean the mass-produced, Costco cupcakes that leave you with a saccharine-sore stomach and dry flakes of cake between your teeth. Every cupcake tastes fresh out of a country oven, baked from scratch with the aid of a floury, wooden rolling pin and an aproned grandma who kneads a little love into every batch. (Corny? Yes. Accurate? Also, yes.) 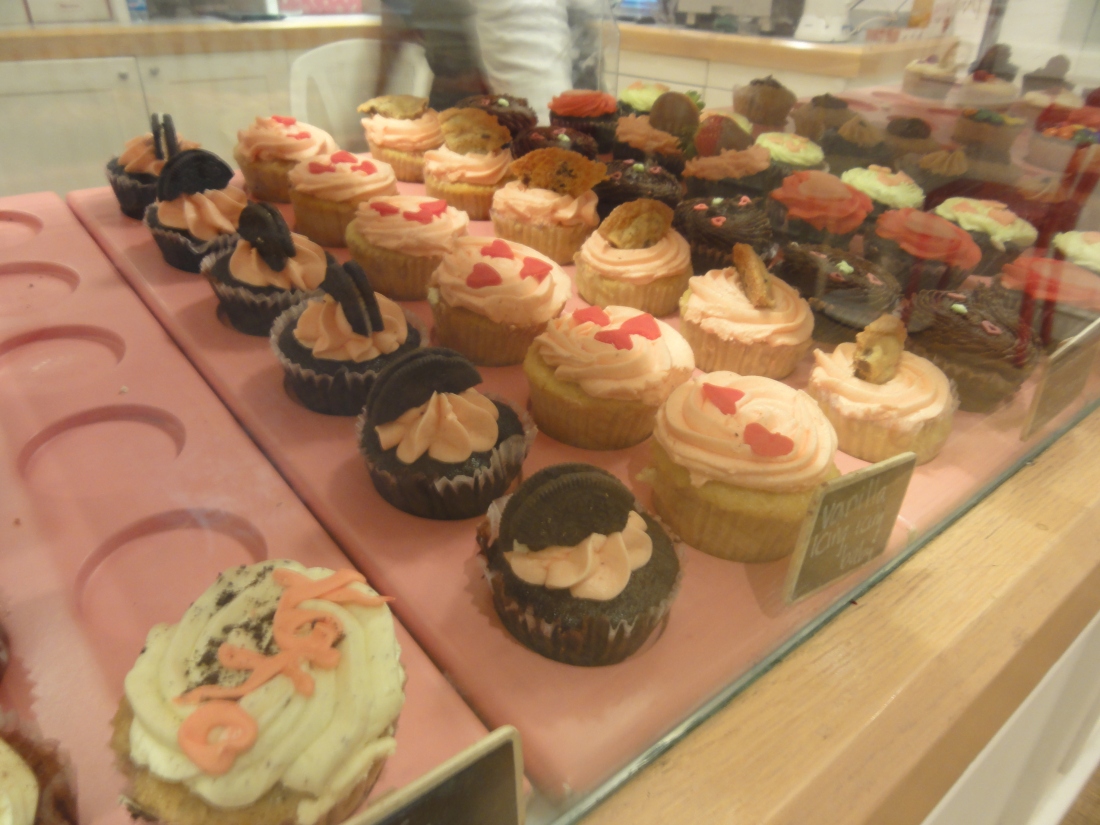 all decked out on Valentine’s Day

And despite the humble display – all the options are neatly printed on the board to your right and don’t vary all that much by day -, there is something for everyone. If you don’t like traditional Cookies and Cream or Vanilla Icing, Icing, Baby, there’s Lemon or, an Egyptian classic, Date. If you need a chocolate fix, try the M&M or, my personal favorite, Chocolate Peanut Butter. (The chocolate cake tumbles apart in your mouth to reveal a whipped, peanut butter filling all snug in the middle. Yum.) 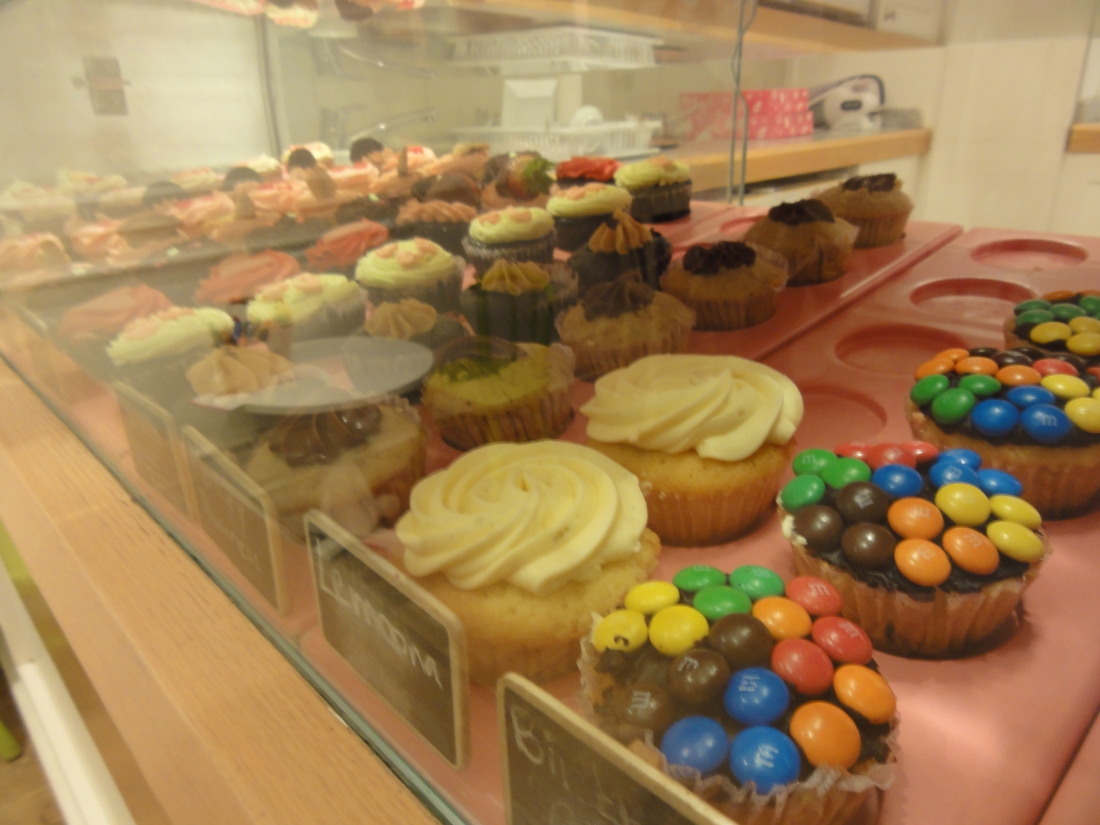 There’s Carrot Cake for the conventional and Monkey Business for Nutella addicts (imagine nuts and banana with a Nutella ganache). Is your mouth watering? It should be.

A box of six – not nearly enough – is 60 LE, or a whopping $10. (And that’s a sarcastic whopping.) After discovering it back in the fall, we mused about how marvelous it was that Egyptian business owners had come up with something so wonderfully western and novel.

Then I went home for the holidays and passed a Crumbs in the Newark Airport.

My reaction was twofold: first, there was dismay. The western world had invented Crumbs after all. It took a bit of the awe out of its Egyptian existence.

Then, I felt joy. There was a Crumbs in New Jersey. In fact, as I later discovered on their website*, there were multiple Crumbs chains in New Jersey. I would not need to suck icing out of a piping tube to abate Crumbs cravings when home in the US. 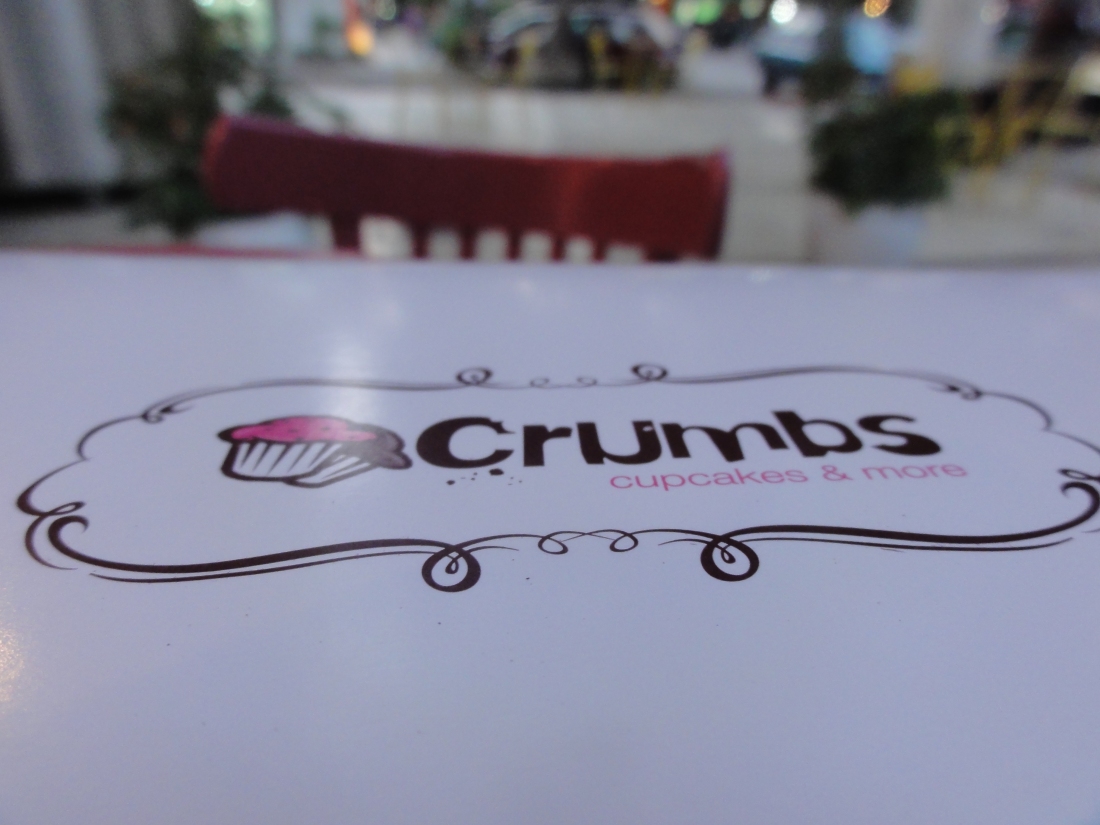 The other night, while people-watching from the pokey magenta tables outside of Crumbs, Nelson and I noted that a few more cupcake shops had recently opened just nearby. It seemed a brazen venture, and I’m certain it will prove disastrous for the other cupcake shop owners. You can’t compete with Crumbs. And even though it’s a chain, I like to think it’s a gritty little Egyptian investment, proud and demure and unique all at once. 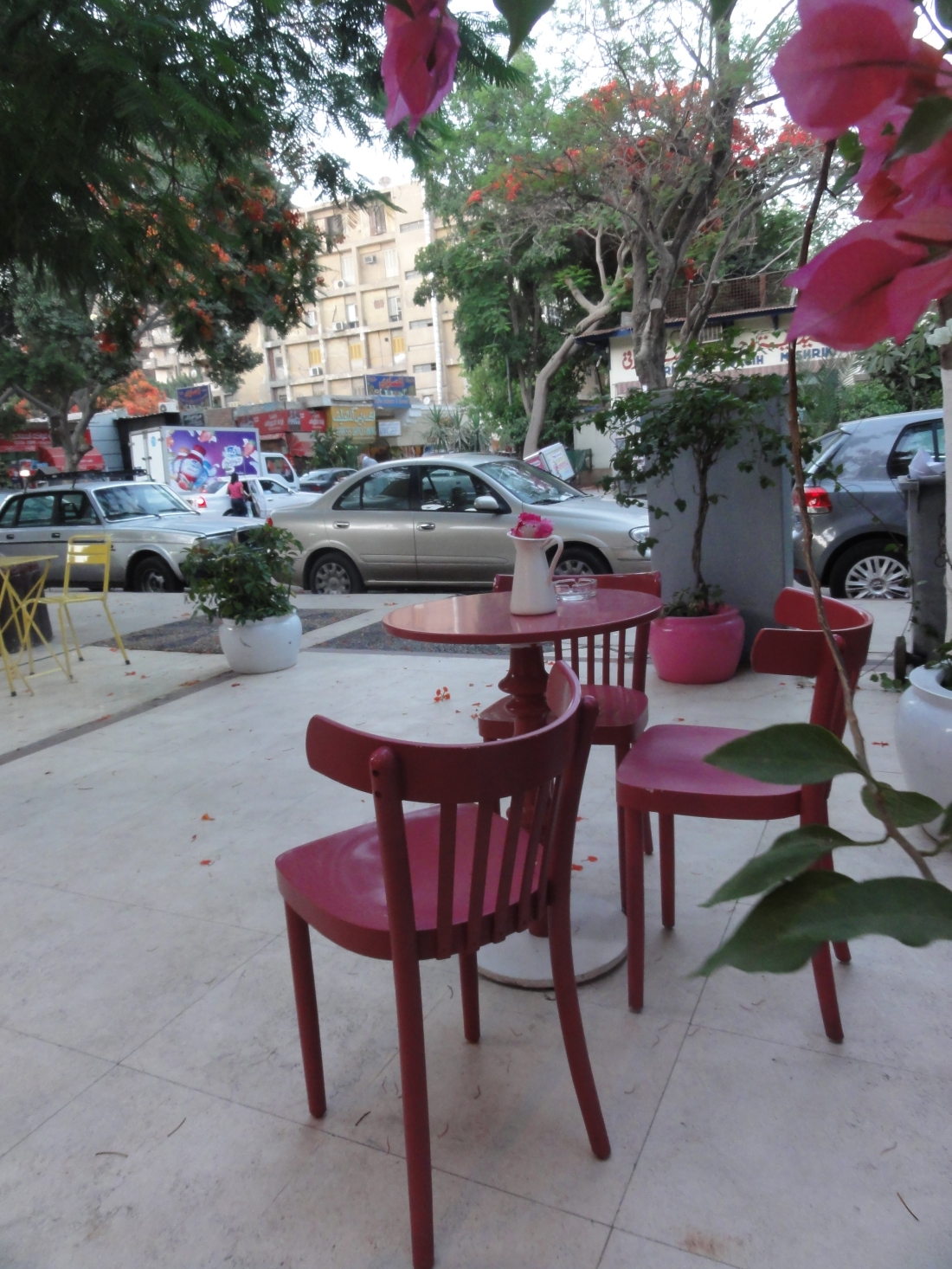 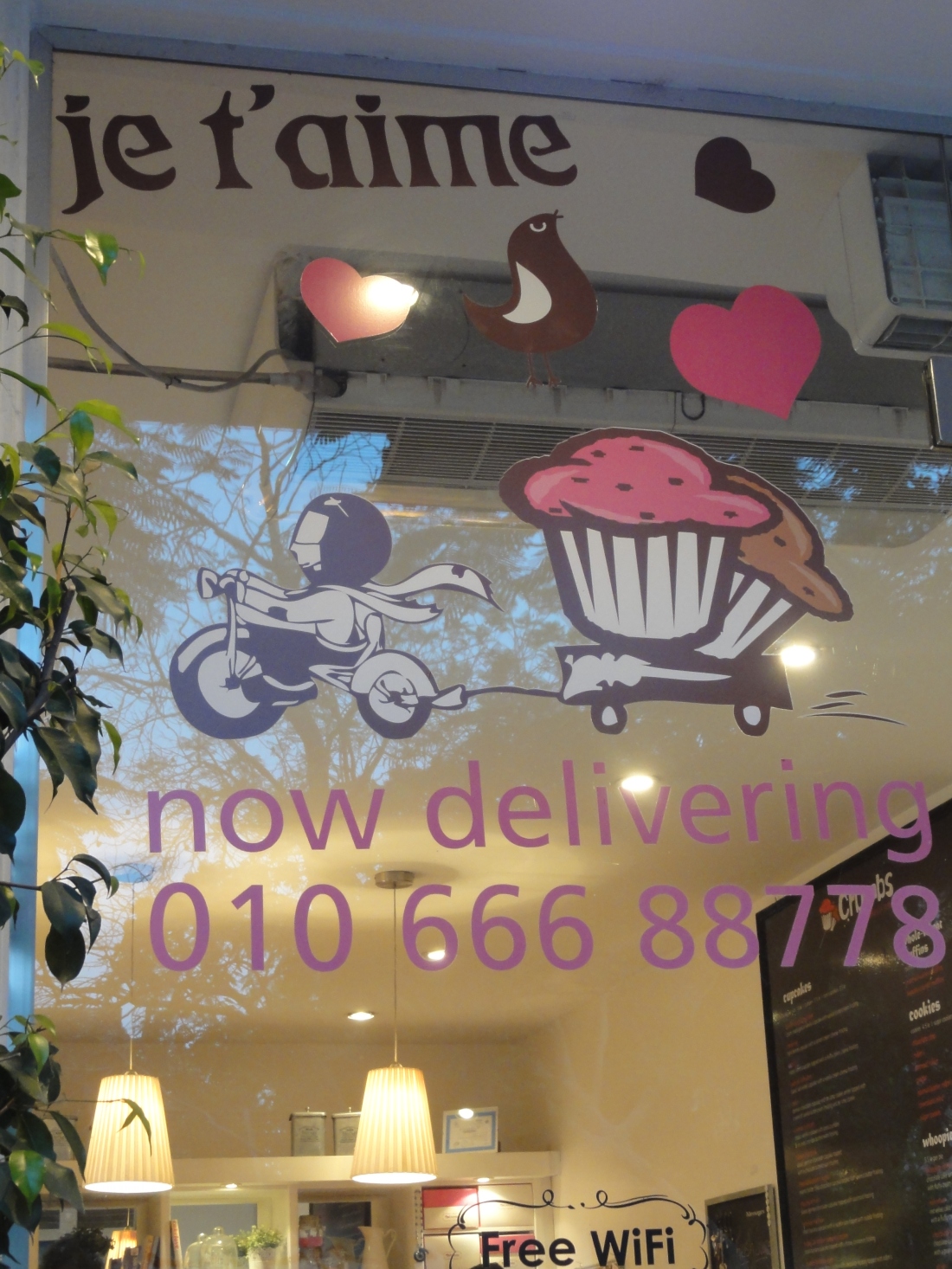 AND they deliver! Just have someone feed it to me and let’s call it a day.

I excitedly told Shannon today that there was a Crumbs in Boston. She reveled in this for a moment before pointing to our almost-empty Crumbs box, a fairly consistent fixture on the kitchen table.

And she is right. Crumbs and Egypt have a symbiotic relationship; where Egypt lacks substantial, sugary, decadent desserts, there is Crumbs. And where Crumbs craves an enthusiastic audience, droves of people in search of a panoply of cupcake options, there is Egypt and its 80 million.

So the next time you’re in Cairo and you’re up to your ears in shawarma and koshary and dates, pop on over to Road 9, bathe in the chilling air conditioned little shop, and gorge yourself on chewy, perfect, gooey, fabulously flavorful cupcakes that you and your Egyptian oven couldn’t dream of topping.

But bring your own milk, because they have yet to perfect the cold and creamy cupcake counterpart.

*Do not visit this website on an empty stomach. You will order more than you can afford. 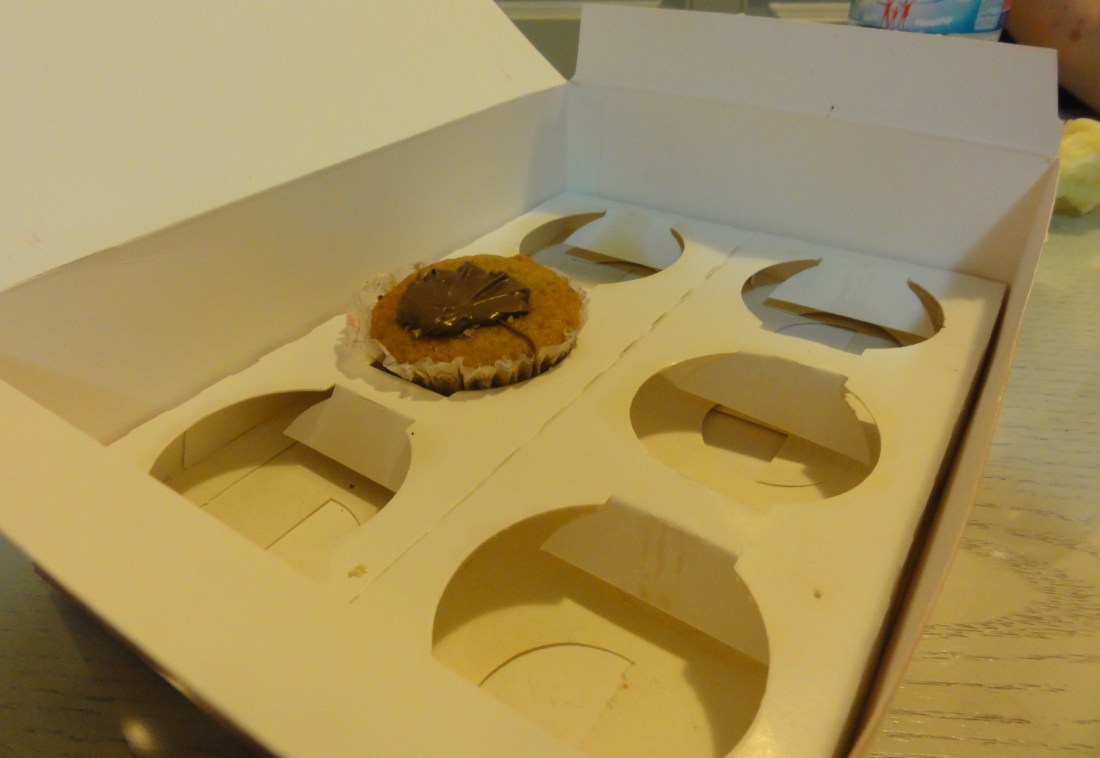