Roadtrip to Alabama: Life south of the Mason-Dixon

One summer, while reclining with some friends on the golden beaches of the Jersey shore, my friend’s mother told me a story.

“Don’t tell your mother,” she began, which immediately piqued my interest. “I’ve had moonshine before. In South Carolina. You set an empty mason jar on a tree stump and go away for a while, and when you come back, it’s filled with moonshine.”

My 11-year-old brain began conjuring images of a sylvan paradise, untouched by technology, where locals manufactured sparkling dust and sold it in secret via tree stump. From that moment on, I knew I needed to visit the south.

In the years to come, I would fantasize about the American deep south, where everyone lived in the pines. When Sweet Home Alabama came out on DVD, I voraciously watched it over and over, imagining life in a small town without ATMs and other northern luxuries.

For me, the south became tantamount to country songs, a pristine and special place where life was a bit slower and more wooded. This was a place where people drove their pickups down to the swimming hole or to a local tree stump for moonshine or a raucous moonlight party. Everyone strummed banjos and congregated in fields or honky-tonks. Girls grew up in sundresses and boys grew up on tractors. Life partners could be easily met in Sunday School while coloring pictures of Noah and his ark. Everyone could sing, whether it be gospel hymns or Brad Paisley tunes. This was a place where an incensed local might shout, “Hell’s bells!” or “Hot damn!” in a moment of fury before politely inserting the distinctly southern contraction “y’all” while addressing the group of concerned individuals who had gathered around him in a picture of southern compassion and amicability. And doubtlessly, this was the place where I might meet my rugged – but educated – southern man whose coon dog accompanied him everywhere. 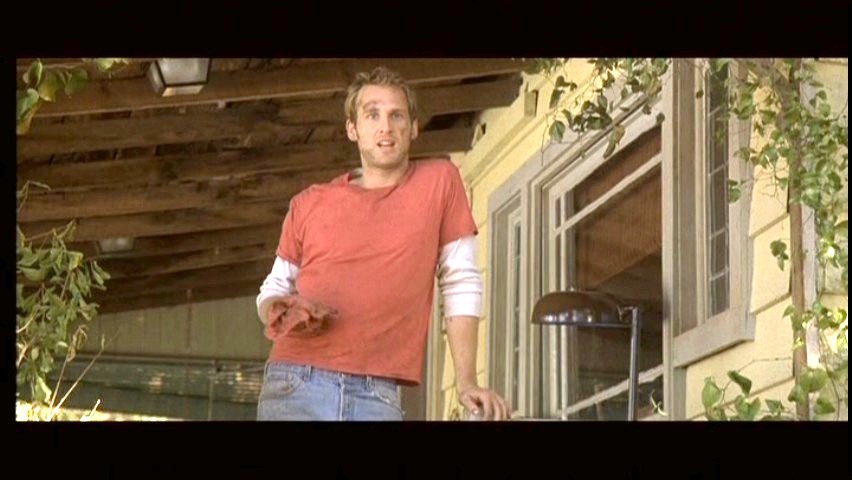 Needless to say, I was beyond thrilled at the prospect of a southbound roadtrip with my good friend Alana. A fifteen-hour drive would be nothing compared to the excitement of meeting my future spouse in a field or by the jukebox at a seedy bar. And despite the fact that Judson and his parents found my southern perspective to be a source of amusement, I wasn’t far off.

For starters, driving south is probably better than flying. The route itself is punctuated with signs indicating that you are no longer in the sophisticated cushion of the Northeast. Driving south gradually introduces you to some of the different elements of life that only flourish south of the Mason-Dixon. You will drive out of New Jersey and through Delaware and Maryland, where five-lane highways will take you past billboards advertising car insurance or Best Buy’s Geek Squad services. The billboards will loyally accompany you until you reach the city limits, then the state borders, where they become scarce, as if nervously disappearing at the sight of the Virginia border. And then, suddenly, they’re gone.

From an automobile standpoint, driving through Virginia is a lot like driving through Pennsylvania; there is not much to see and it seems to go on forever. You will see thousands of Cracker Barrel signs. Eleven hours into the drive, Alana and I turned this into a game, awarding points to whoever spotted the Cracker Barrel first. This grew infinitely boring after twenty minutes passed and we’d each scored five or six points. 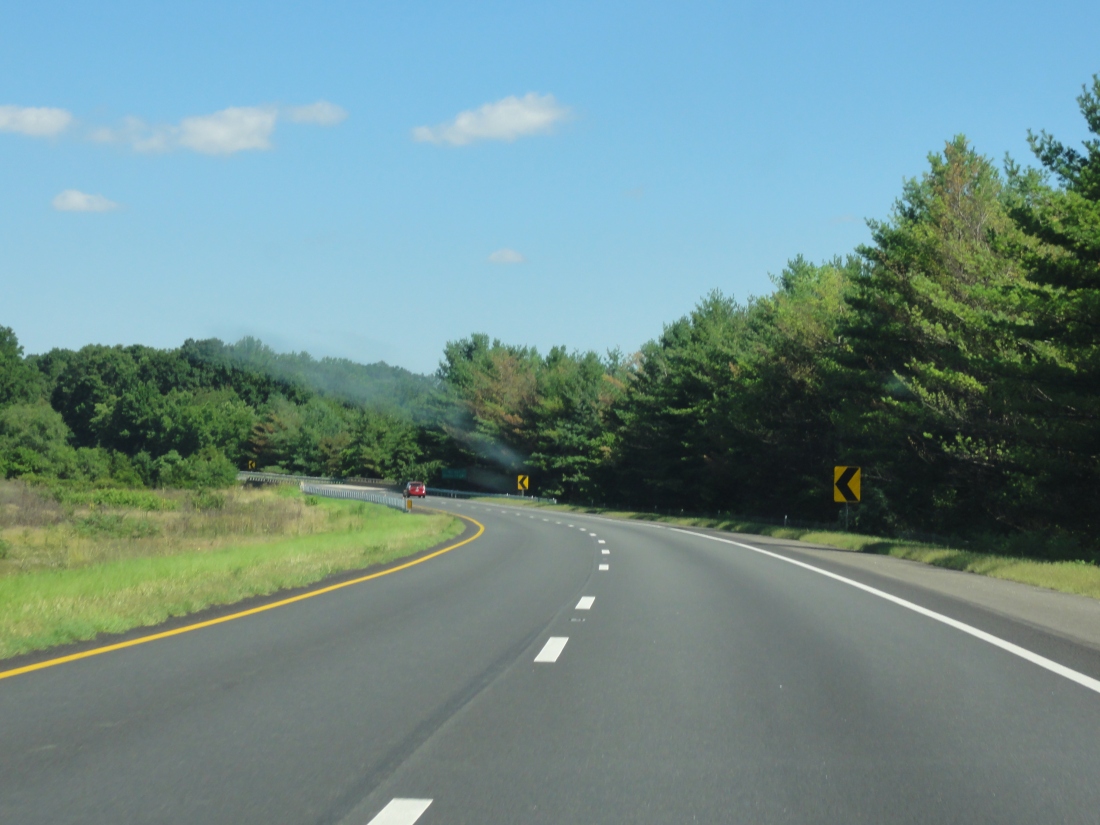 Carry me back to Virginia

Billboards will appear, and they will advertise things like Ruby Falls or Rock City, wondrous and breathtaking sights that every traveler heading south must detour to see. Billboards will appear when you are just 50 miles away from the sight, and will recur with increasing frequency the closer you get to the destination.

Other billboards might advertise discounts on fireworks, encourage the purchase of guns, or suggest that voting Republican is the best chance to save your country. (As one billboard read: If you could do one thing to save your nation, would you do it? Vote Republican.) Other signs informed drivers that Jesus would vote for Mitt Romney. (I won’t begin to get into the issues here. Would Jesus even want to take a US Citizenship test? Or maybe he’d rather stop at a warehouse and buy fireworks.)

It’s not hard to tell once you start getting into the real deep south. Massive crosses spring up on the horizon or along the road, marking your entrance into the Bible Belt. Radio stations descend into a cacophony of static once you pass the big cities with antennae and head up into the Blue Ridge Mountains.

For all of its conservative flair and podunk gas stations, the south is actually quite remarkable. Virginia may be monotonous, but it’s a comfortable, green monotony rolling and unraveling in the green hills along the roadside, the sky a special clear blue, untouched by smog. We wished we’d planned to stop and see Skyline Drive, for instance. 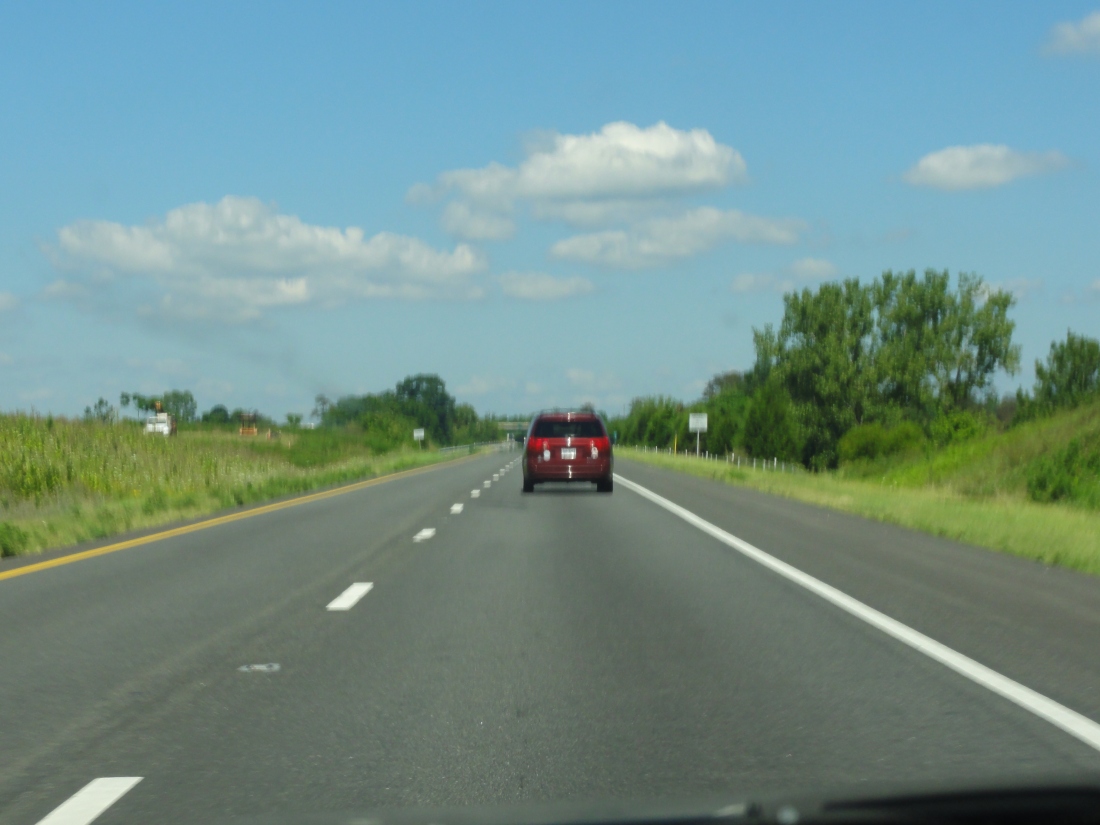 Virginia again! Just like the other picture, but with a van.

Surprisingly, you’ll find yourself encountering road signs for cities like Philadelphia or Newark cropping up among the names of towns you remember from the Civil War section of your history book: Manassas, Bull Run, Yorktown. Passing signs for Roanoke brings to mind the first lost colony in the US. And so on.

I knew we were irreversibly south when we passed a sign advertising the “purgatory emporium,” and this made me feel both happy and isolated. What the hell was a purgatory emporium? What might one find there?

We did not stop to find out, but we did stop at a Target and a gas station on the way down, which introduced us to a bit of hospitality (a nice girl with a southern drawl at Target) and a bit of southern charm (being whistled at and spoken loudly about by a pair of tattooed Tennessee folk at the gas station). We also chose to stop at the Cracker Barrel, an obvious staple of southern cuisine rendered irresistible by the hundreds of signs urging you to turn off the road and get into one immediately. Here, Alana made a cardinal mistake, insulting the southern way of life by requesting a salad without chicken. Apparently, down south, this is some sort of mystical eleventh commandment: thou shalt eat chicken.

“Could I get the salad without chicken?” Alana asked pleasantly. (As it turns out, it’s impossible for Alana to ask unpleasantly.)

“Yes, is that possible?”

“You want the salad…without chicken?”

If I told you this conversation was uncomfortable, I’d be selling it short. I thought the woman was going to signal her manager to ask us to leave the establishment. In the end, the woman tried to get on board with the no-chicken request and had it put on the side. I can imagine that, one week later, she is still recounting this unnerving tale to horrified friends in her knitting circle.

We rolled into Birmingham well after eleven at night, exhausted and barely coherent through a caffeine-induced torpor. Once we rolled up into Judson’s driveway – not the cobblestone moat that surrounded the mansion I envisioned he owned, but still a steep slope up to an enchantingly lovely abode that was beautiful and southern either way -, Alana and I were ready to crash.

And we would have, if Judson hadn’t asked us to come out to see one band at a dive bar. We gave him a hesitant and sluggish okay and followed him and his friend Will down the driveway to Will’s pickup truck. The sight of the truck – not a Chevy or a Ford, a truck nonetheless – lifted my spirits and I wondered if I could survive a late night in Birmingham. (To be fair, seeing Judson outside of Egypt was also very exciting, but I hadn’t been expecting the pickup truck.)

Then I opened the door and spotted two mason jars of moonshine rolling around on the backseat. I was ready to go.

*If this entry doesn’t do it for you, put on any of Old Crow Medicine Show’s albums. That, and a mix of bluegrass, carried us down south.