Last year, I flew home from Cairo via London and spent the night of December 21 strolling around Picadilly Circus with two fun men and a plastic container of Chinese food. This year, in an attempt to switch it up a bit, I booked the exact same flight through London.

But this year, I viewed my layover with unparalleled excitement. I had spent the last few months of 2012 relishing the company of a man I was quite fond of who hailed from the UK. When I informed him that my flight stranded me in London for a night, he enthusiastically remarked that he could fly back on that same day and spend the night showing me around his ol’ stomping grounds. After some finagling, he managed to schedule his flight on the 21st and we eagerly discussed all the possibilities for our layover. (This happiness was magnified by the fact that we have only known each other in Cairo, a conservative city that does not allow for certain behavior, like drinking at a proper pub, holding hands, or wearing coats. I was especially excited to see what he looked like in a coat.)

With such a monumental evening on the horizon, I felt I needed to take a step further and get him a Christmas present. After all, he had brought me a stuffed elephant after his trip to Durban in November. The gift idea came to me immediately and exuberantly:

I was going to get him a meerkat.

Let me explain. Aside from the fact that meerkats are perky and adorable, they have quite the following in the UK largely as a result of advertisements that, after thorough research, I’ve decided are exactly like Geico commercials but featuring a cuter animal with a Russian accent, as opposed to a British one. (The meerkats are also sophisticated in that they are clothed and not traipsing about the Brooklyn Bridge in the nude.) The wonderfully snarky and silly ‘Compare the Meerkat’ commercials highlight the plight of a frazzled meerkat named Aleksandr and his subservient, somewhat pitiable assistant, Sergei. (I had been exposed to Sergei since J has the stuffed meerkat on his bookshelf.) The premise is something similar to Geico: an obscure species of animal is in a huff because internet users are confusing the name of an insurance company with the name of the animal. In this case, Aleksandr, clad only in a bathrobe, reprimands misguided insurance seekers for accidentally visiting ‘Compare the Meerkat,’ a website he created where users can compare different types of meerkats to their hearts’ content. The commercials end with him imploring these confused individuals to instead check out ‘Compare the Market.’

I quickly resolved to purchase the Aleksandr meerkat and have it delivered to Chantelle’s house in Tottenham just in time for the long layover and for Christmas. This in itself was a challenge for two reasons: first, the toy was not sold anywhere. Second, it was already the 16th of December. Since the only way to obtain one of these authentic items is to switch your insurance, and since this obviously was not a possibility for me, it was with deep regret I turned to the only outlet available: eBay.

I loathe eBay. I detest the anxiety that accompanies an auction, and winning never feels good because if you’ve won, someone else has lost. You singlehandedly put a damper on some other bidder’s Christmas, and in my head, all of the other bidders work for the Make a Wish Foundation.

With nowhere else to turn, I phoned my Scottish friend/eBay expert, Loraine, and had her come over and set up an account for me while explaining some of the ins and outs.

“Just remember,” she urged as she left, “these things go for free in the UK. For free. Keep that in mind.”

I happily discovered that eBay had two listings for the doll, so I added it to my Watch List and then proceeded to spend the entire four hours of the bidding refreshing the webpage, even though Loraine said I could leave the computer and do other things. The highest bid was a meager 5 British Sterling, and it remained that way for the duration of the sale. At the one minute mark, I entered in my bid and sat back happily. The price hadn’t risen in the past four hours. Why should it now?

As it turned out, the other bidders were experts. In the last 47 seconds – 47 seconds!  – the bid increased to 25 Sterling and the item was sold before I could even consider raising my bid. I was completely baffled. It was as if I’d been sailing in a boat on calm seas beneath sunny skies and all of a sudden the boat just sunk. In 47 seconds.

Distraught, I canceled my evening plans and hovered obsessively around the computer in hopes of winning the second auction, but alas, the situation was the same. This time, the item sold for approximately $50. That’s right. A stuffed meerkat doll that is given away for free was sold on eBay for the price one might pay for a juicer or a good pair of jeans. And at least the latter items demonstrate their worth over the years. The meerkat simply sits on the bookshelf and stares absently ahead.

Still, I was determined to win this meerkat. The next morning, four more were listed on eBay and I frantically added them to my Watch List. On Wednesday night, when the bidding was to take place, I decided to try a different strategy, which involved unwinding at the bar rather than gawking at a computer screen for the better part of the night. Not the best plan.

This time, I waited until the last fifteen seconds before posting my top bid. On tenterhooks, I awaited the ominous red bar that indicated I had been outbid, but the bidders were subdued. I’d won! I was the highest bidder! I leapt from the chair and gorged myself on Christmas cookies in celebration.

It seemed silly that this meerkat had just sold for $50 the other day and here I was, patient and professional, snagging it for $20. Those fools, I may have thought.

Imagine my shock, then, when the bill came through for $50. The $20 bid I’d put down was actually in British Sterling, and if you’re not up for the conversion, that’s about $50 American. Yup.

It took a while for my blunder to sink in, and even when it did, there wasn’t much to do but wait with fingers crossed and high hopes for an on-time arrival on the 21st.

Things were not to go so smoothly. Overnight, the meerkat unwittingly became a thorn in my side, a reluctant symbol of defeat. In the last week before break, as the meerkat was snugly packed and shipped with his certificate of authenticity, my relationship – though I am hesitant to call it that – hit a bump. It may or may not have ended. Regardless, I felt pretty bummed.

To rub salt in the wound, Chantelle texted me a mere hour after this occurred to eagerly inform me that the meerkat had arrived, and she’d be bringing it to Heathrow as scheduled.

To their credit, Loraine, Chantelle, and Sarah all did their best to make my layover a fabulous one. Loraine bought a $7 bottle of Smirnoff and sneaked it on the plane to spike our sodas; she and Chantelle pretty much paid for all of my expenses throughout the trip, including a trek to McDonald’s at 2 in the morning and the subsequent cab ride to Big Ben. (A step up from Chinese and Buckingham Palace last year.) But as we stood in the rain awaiting the 3:30am bus to Heathrow, I just couldn’t make myself happy. 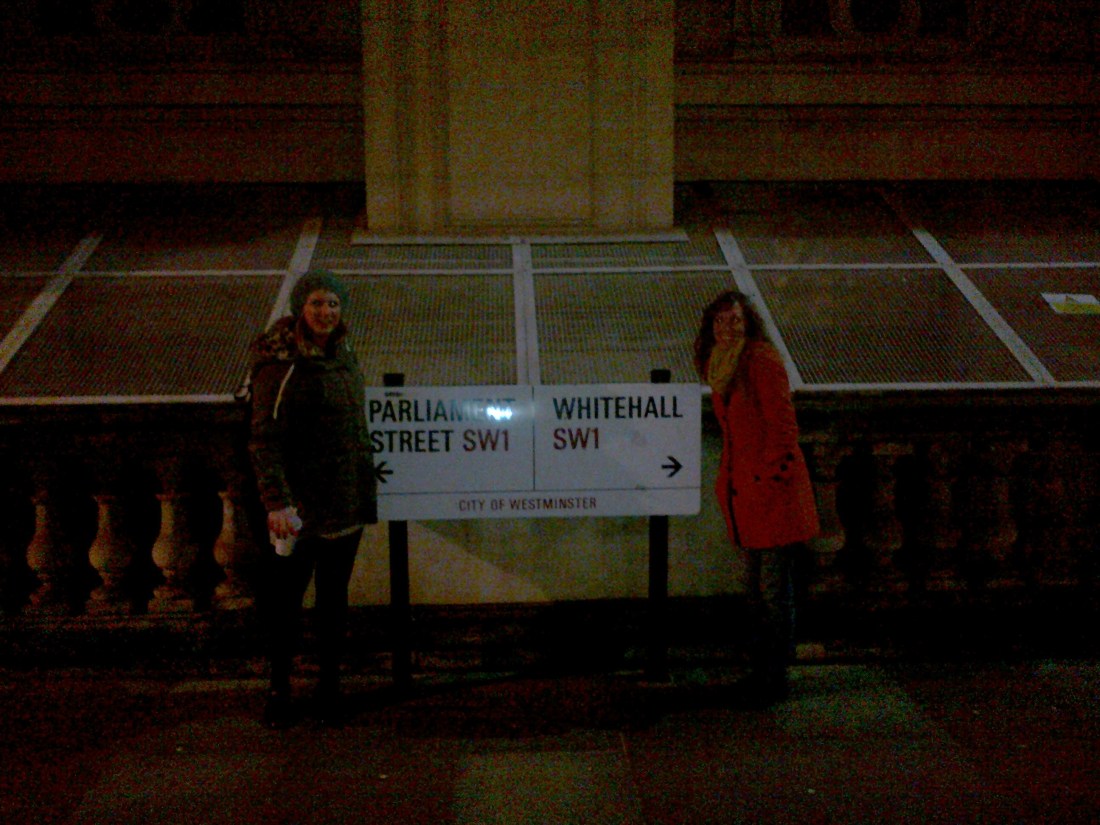 Outside the Prime Minister’s building?

I sat in the departures lounge sipping a Starbucks seasonal latte, the cup urging me to “feel Christmassy inside.” I didn’t. I am a believer in the idea that you can’t control what happens in life sometimes, but you can always control your reaction. And I was disappointed with myself for being whiny and ungrateful. I knew things would get better. I was excited to be at home with family and friends. But at that exact moment, I just felt gloomy.

The meerkat arrives in Cairo