Showing off the Shore

I’ll admit it – I’m a wild and loyal fan of New Jersey in the summer. I always have been. And no matter how long I’ve stayed away for, there’s still a bit of brackish river water in these veins that draws me back to my roots every June. Look for me en route to the shore, often shaking an angry fist and silently cursing BENNYs along with the rest of ’em.

For me, home is all over. Home can be sitting in the backyard at the firepit drinking beers with Dad or it can be visiting a favorite watering hole with two old friends on a Friday night or it can be sitting in Kacey’s brand new, modern little house by the beach, chatting to her mother while the pit bull awkwardly licks my knee. It can be scurrying to the car through a rain shower while my cousin’s children sword fight with sparklers under the front porch awning.

Dad got a fire pit

That said, there’s a feeling of what can best be described as primal excitement when a friend of mine from someplace else decides to visit New Jersey. Immediately I recall the loon, a bird whose reproductive ritual involves flying to a fellow loon’s pond and reconnecting with other loons in the area. During this time, the loons are given a tour of the pond by their hospitable host and spend some time hanging around, before ducking into quiet corners with their mates of choice. (Is it called a reloon-ion?)

Apart from the reproduction, I can relate to this. I want to show everyone around my little pond, show them all the wonderful places and people that make it special.

Sally, a fashion-savvy and gregarious gal with a superb London accent, flew across the big pond last week and landed in New Jersey in time for the Fourth – and Hurricane Arthur. Thrilled, I spent the 3rd taking her to lunch at Off the Hook, known for its fruity sangria and breathtaking beach and bridge views. We tested her mettle at my cousin’s party, where she held her own in a sea of witty digs:

“Help yourself to anything,” Chris greeted her.

“Even the furniture?” she quipped.

We barhopped in Red Bank and ended the night in Jrs, a fast food joint on West Front where I swayed among a crowd of drunks, waiting for mozzarella sticks. 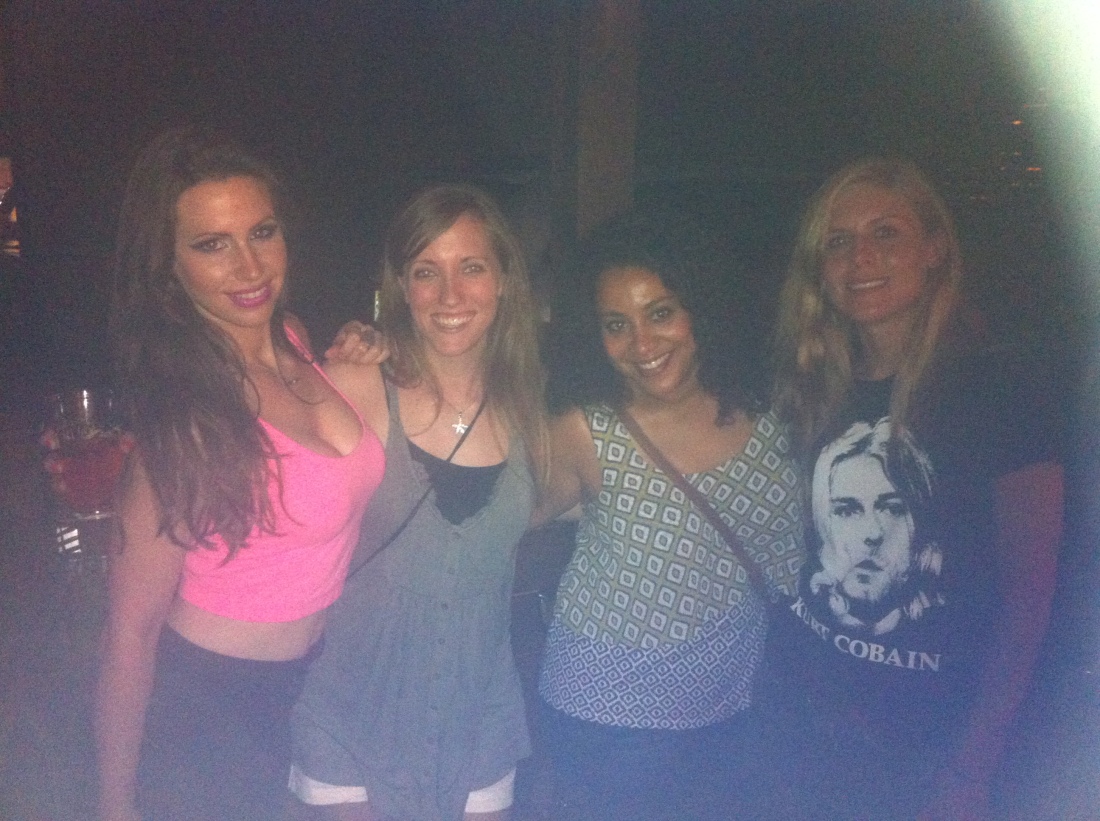 On the following day, we awoke to rain, the messy result of Arthur plowing up the Carolina coast before stumbling haphazardly out to sea. Undeterred, we breakfasted at Turning Point, a hip and cozy brunch spot offering zesty omelets and rich, syrupy pancakes. I admired Sally’s nonchalance in the face of no fireworks: a shrug, some optimism, no qualms about a movie.

In the afternoon, the sun came up and we headed south to Kane Brewery, a quirky watering hole located in an industrial plaza. It was an odd juxtaposition: the discomforting waiting room entryway opening into a what could have been a small airport hangar. The funky warehouse feel was pleasantly broken up by a dozen wooden picnic tables and stout pickle barrels for patrons who preferred standing. We all ordered flights of four and crowded them onto the barrel, sipping and talking hopps and cloudiness.

At some point, we whipped out Heads Up, a charades app, and launched into a twenty minute game, much to the amusement of everyone else in the brewery. It was fun. Uninhibited, random fun. The best kind. As we knelt down, pantomiming ‘Changing a Tire’ (“Burying a body?” Shar ventured), I decided that, fireworks or not, the day was a win. Our new goal was to procure alcohol from the nearby liquor store (which we ambitiously did), linger at the Beach Bar for a drink or two (which we also did), and then head up to Long Branch for a fireworks spectacular on the beach, drinks in hand.

Unfortunately, we didn’t make it (partially a result of my quest for hoagitos), but when Sally told me at the train station the following day, under a mocking, cloudless sky, that her trip had been wonderful, I felt elated.

And, just like the loon, I’ll be paying a visit to her pond in a few weeks for a long layover.

A rainy night in Jersey