Ireland is a place whose quirk is often overshadowed in guidebooks by its lively pubs and green, grassy glory. But Ireland is a delightfully eccentric country replete with puzzling details. For example, its leading news story for the duration of the trip was the apparent scandal involving five Garth Brooks concerts that had been scheduled at Croke Park and then canceled. (I had no idea Ireland had such a demand for country music.) Garth was happy to play five shows, but some bizarre Croke Park law prohibited such extravagance and limited him to a mere three, an inadequate number for Mr. Brooks. By the time we left Ireland, a court case was in the works and radio hosts had labeled the ordeal Garthgate.

What is especially bizarre – and you all knew this was coming – is driving a car from the passenger side and in the opposite lane of traffic. This I’d been approaching at once with dread and curious anticipation, like a puppy when presented with a particularly chewy electrical wire.

I’m still not sure why Ireland (among others) drives on the left. A quick Google search resulted in a Yahoo forum where some curious poster asked just that and was bitterly rebuked by what I can only assume is some pompous left-side-of-the-road driver.

“Why does everywhere else drive on the right?” the responder retorted. You mean apart from all these other countries I am going to pedantically list for you here?

No answer was given, save for the responder’s list of countries, so I’m content to just chalk it up to a love of variety in the world.

We’d boldly opted for a manual because it was cheaper – mind-blowingly cheaper. (If you can’t drive stick, learn. The world is a far cheaper place for those who can handle a gearshift!)

Our car was Jan Brady look-at-me blue; it looked like a child’s toy, but enlarged so adults could use it. Even in the early morning mizzle, we took a moment to admire it in awe: a right-aligned steering wheel, a vacant dashboard on the left for a relaxing passenger’s heels, a gearshift for my unpracticed left hand. We circled it like loyal family dogs might sniff at a deformed kitten their owners adopted as a pet. 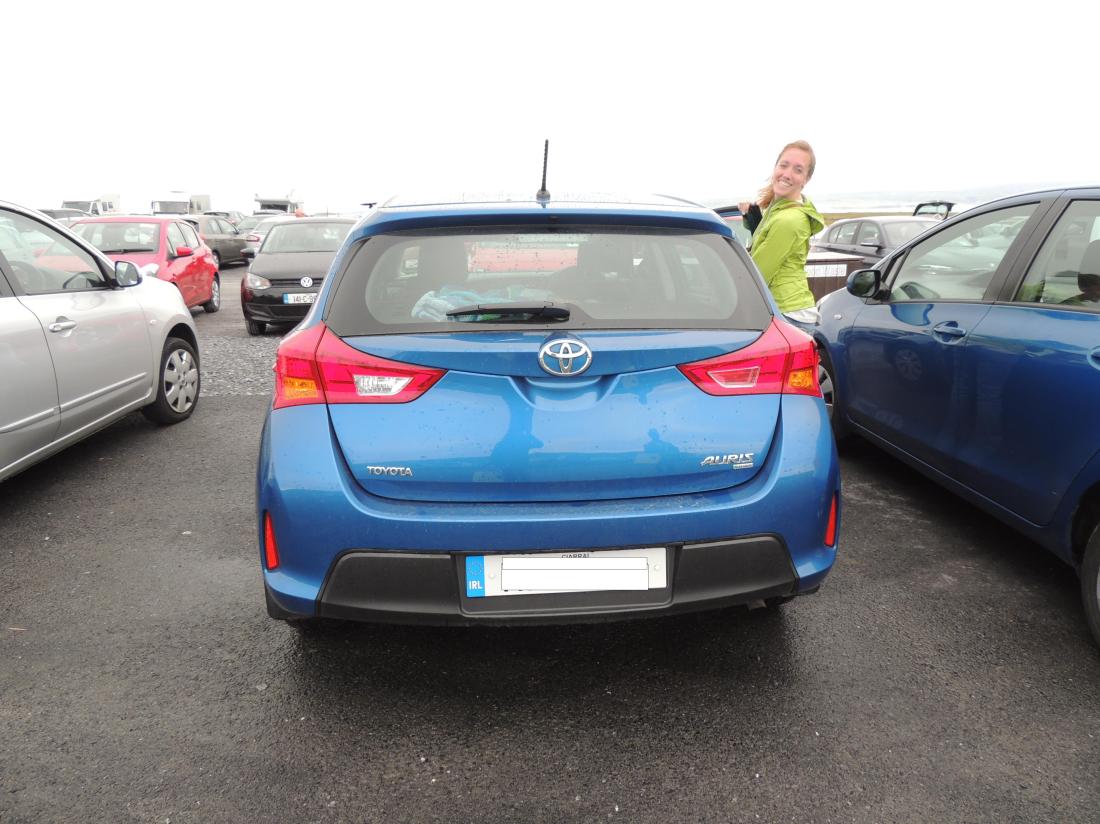 This only stands out a little bit, right?

In the end, we accepted its adorable mutations and clambered in, ready to conquer the backwards roads. Then I stalled.

I’m not sure how we made it to Dublin, but it’s definitely thanks to a bit of luck and Irish patience. We were doing alright, all things considered, until we reached the city center. Kacey had expressed the urge to use the bathroom since we’d merged onto the motorway. We were on a major street into town, shops cluttering the roadsides, when Kacey could no longer stand it.

“Can you pull in here at McDonalds? I’m not gonna make it.”

One glance at the McDonalds revealed that it was the world’s most inaccessible fast food restaurant. There it was on the corner, but there seemed to be no way to get near to it. Where was the drive-thru? A parking lot? Was it even real?

“Here” was a right angle turn onto what can only be called a large, paved footpath. At the mouth of this entryway were two cement posts and a traffic cone sitting there for no discernible reason except for the hell of it. I wanted to say, “No, that’s too narrow, I will not turn,” but Kacey looked very squeamish so I obliged. Once in, a number of things became clear:

1. The ‘road’ led nowhere. There was a line of cars preventing any further forward movement.

2. The car park to the left, like the McDonalds, was inaccessible by any way except secret trap door.

3. The only way out was to reverse into a lane of heavy, oncoming traffic.

4. This was not a place to order cheeseburgers through a window.

With these factors in mind, I did the only feasible thing: I panicked.

I told myself I could do it. Slowly, I angled the car backward –

And it was – it looked as if an angry bear had mauled the side of the car. I hadn’t even felt the post. Twenty-seven years of hugging the left shoulder of a lane had encouraged me to cling to the left here, as well. There was probably enough space on my right for a golf cart to happily pass through, but it was too late now. Now, I was stuck and afraid to back up.

We all sat paralyzed in our bright blue car, wedged mid-turn between two cement posts, a spectacle for all passersby. It is here that my favorite quirky bit about Ireland comes into play. The Irish are friendly. Insanely friendly. Friendlier than Icelanders and Canadians combined. Where an American cashier will politely ring you up and send you on your way, an Irish one will hold up a line to ask you about everything from where you’re from to food allergies you might have. An Irish person’s hobbies may easily be drinking, eating, and befriending strangers.

As we sat stuck between the world of traffic and the world of cement posts, a portly Irishman appeared at my window, smiling broadly as I perspired with panic.

“Hello there! You look afraid to back up,” he said jovially, as if he set off every morning to help strangers. I don’t even know where he came from. One minute I’m stranded on a lone sidewalk, the next there’s an Irish man there.

I blurted that yes, I was afraid and he instructed me on how to cut the wheel. This I did, glancing nervously in the rearview mirror, afraid that our car might be struck by a passing car at any moment – but no. In the road stood another man, halting traffic and waving to us to back out.

With their help, we emerged back into the lane of traffic. We drove off while they presumably retired to a cave to await more distress signals. 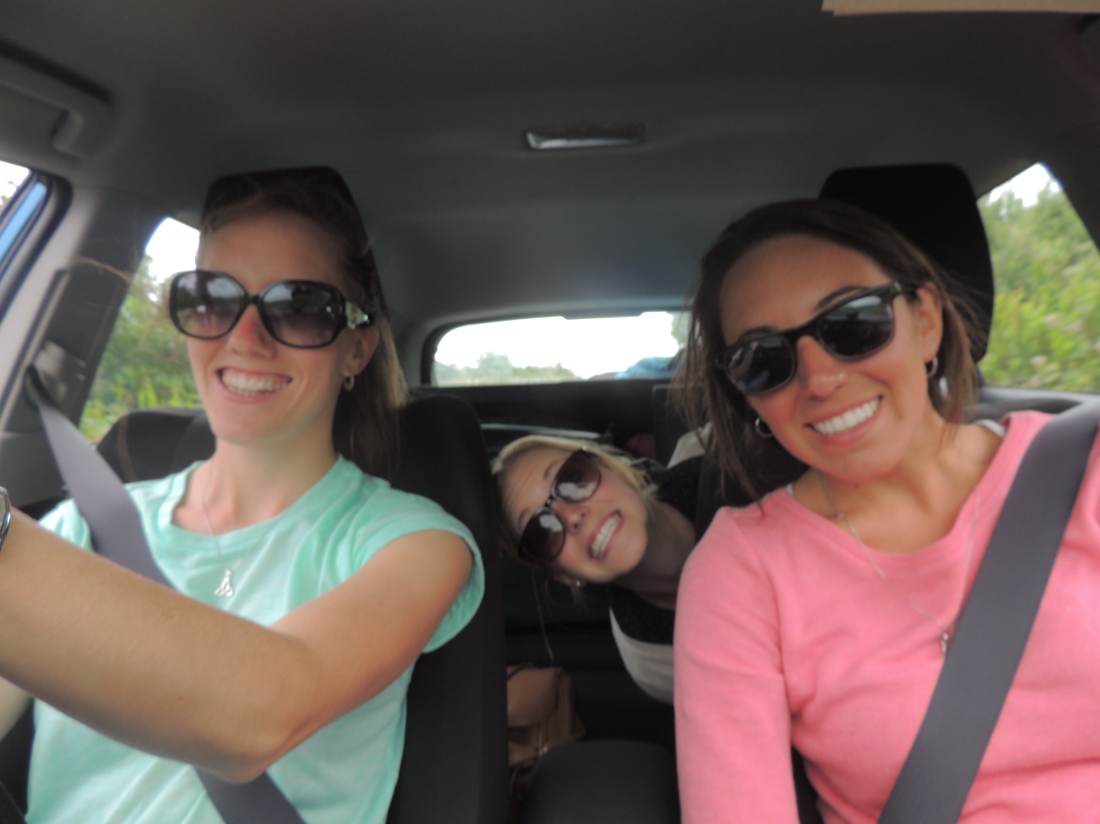 Got the hang of it!

I think we were all extremely uncertain of my driving skills at that point, but I’m happy to say that after two days, I got it. Sure, Kacey and Allison got a mouthful of bushes now and then and I’d occasionally turn into the wrong lane, a truck barreling toward us, but by the end of the trip, we were experts.

“We’ve come a long way,” Allison remarked on our last day. “We can drive with the radio on now!”

We were even able to heckle other drivers who were driving too slowly or edging too far to one side of the road.

Driving on the left felt so natural by the end that, when returning the car to the rental company, we mused for a moment over the accident report, half-forgetting it had even happened. After sketching the scene in the box, I was to answer the following question:

In your opinion, whose fault was the accident?

I thought this was an unfair question, so I graciously shared the blame with the cement posts and was sure to use words like ‘rubbed’ and ‘brushed’ to paint a gentler image of the incident.

Despite all of this, and regardless of the rocky start we had with Ireland, its friendliness, patience, and goodwill triumphed in the end. Nowhere else in the world can you hold up a lane of traffic for five minutes without hearing the honk of a car or the swearing of an irate passenger.

Hats off to you, Ireland.