By mid-afternoon, the snow had let up. While we wouldn’t be making Vianden, a castle in the north, Claire reckoned we could still do Schengen and Belgium.

Our first stop was the American cemetery, resting place of General George Patton. Gretel knew this because she’d taught a girl from Luxembourg while she was in Minnesota. Apparently, Luxembourgers enjoy traveling to Minnesota.

Gretel’s father went to high school with an exchange student from the country called Roland. They kept in touch long after high school and Gretel wanted to say hello while we were in Luxembourg, but she didn’t have any way of contacting him.

Enter Anne, Claire’s mother. She messaged a friend, asking if she knew them and – here’s a shocker – she did! And they lived just five minutes away from Claire’s. We did a drive-by hello, and then sped off to Schengen. I’d never heard of it until our school trip to Italy last year, but it’s the city where European leaders from Benelux, Germany, and France signed an agreement to open their borders to travel.  In later years, other European countries adopted the open borders and signed on.

“This is why we haven’t gotten a lot of stamps in our passports,” Gretel summed up as we admired the Schengen monument by doing a line-out in front of it.

“But it’s also the reason I can do this,” Claire told us later as we pulled up to a roundabout. For some reason, I had missed the conversation describing exactly what we were doing, and was very confused when Claire hit the gas and sped across the bridge, through another roundabout, and down a road into France.

“Three countries in under a minute!” Gretel had clearly understood the concept, but was disappointed in the time it took, so Claire did it again, this time in just 48 seconds. It is pretty cool to say you were in France, Germany, and Luxembourg all in under a minute.

“I bet that’s not in the Lonely Planet,” Claire announced triumphantly. 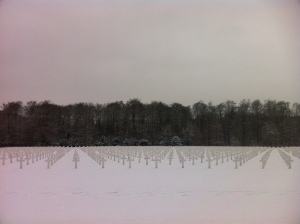 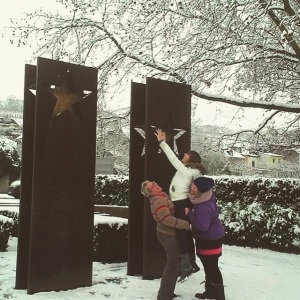 Belgium probably has some cool cities, like Brussels, but the easiest place to hop the border was at a little town called Arlon. I thought my excitement at drinking Belgian beer in Belgium was unmatched, but as we approached the Belgian border, Claire spotted a Burger King and nearly lost it.

“Oh my God! That’s where the second one is!”

“Yeah! We heard a rumor they were building a second one and – oh my God! There’s a Dunkin Donuts, too!”

I found this very entertaining. Rumors often circulate around a famous celebrity coming to town or a scandal in the royal family. In Luxembourg, it’s the construction of a second Burger King. As in, there are only two in the country. And from Claire’s reaction, it was as if the Luxembourg government had sneakily hidden it near the border for lucky Luxembourgers to find unexpectedly, like an Easter egg you find in the couch a few months after Easter.

In Arlon, a rather cramped but cultured city, the LP recommended a “stone-roofed” tavern with a plethora of beers on tap.

Sadly, it did not open until six. Undeterred, we settled on a small bar across the street called Le Venitien that looked deceptively like a pizza parlor. Inside, three ornery-looking locals stared hawkishly at us as we toasted our Belgian beers and ripped open a bag of potato chips.

I ordered a Trappist beer called Westmalle which the waitress told me was “tres fort.” Fort indeed – at 9%, I think it had the highest alcohol content of the four.

Outside, the sun was setting over Belgium’s snowy rooftops, and it was time to return to Claire’s for a homemade meal. Our afternoon – cemetery, Schengen, Belgium, back – had taken less than four hours. We had enough time to stop at Dunkin Donuts and Sido’s new flat before dining like kings on ham and potatoes a la Claire’s mother. 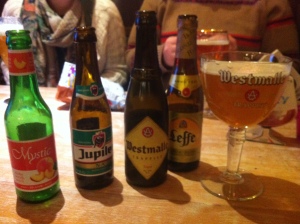 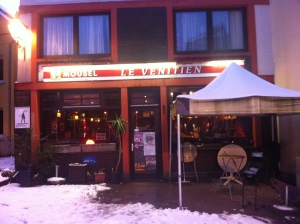 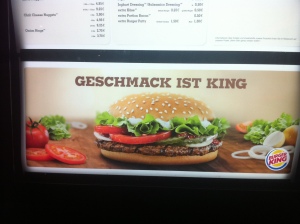 It is King, in Luxembourg

We were feeling pretty stuffed after dinner, but there was one more sight to be seen.

On our first day, during breakfast, Gretel had been reading LP recommended bars and had stumbled upon Le Sud, which she pronounced phonetically, as in “soap sud.”

“It’s Le Sood,” Claire corrected her, but it was too late. For no other reason apart from the crass sound of Gretel’s mispronunciation, Le Sud became a weird focal point of the trip.

“Let’s go to The Sud,” we’d say, or “This sight is beautiful, but I bet The Sud has a better view of the town.”

In fact, the LP was so enamored with Le Sud that it was mentioned in the drinks section and in the overview section, as if this was THE must-see location in Luxembourg. An overpriced, kind of smarmy lounge, it offered pricey cocktails that we agreed we would share to save money.

We took the elevator up and entered a dark spacious lounge, empty save for an older couple engaged in some serious heavy petting on a sofa. For some reason, Gretel and I found this sidesplittingly hilarious, and laughed at them over mint green macaroons. When they left, another similarly aged couple entered from the rooftop verandah, sat in the same spot, and promptly began snogging.

Apart from being a hotspot for middle-aged couples in heat, Le Sud fulfilled its promise of glittering Luxembourgish vistas – which I’m sure look more pleasant in the balmy heat of summer.

I guess this means we’ll have to go back in the summer, then. I’d say it really was a fitting end to the trip, but I didn’t want the trip to end at all, and, as we were about the find out, the “end” wasn’t to go as smoothly as an evening at Le Sud. 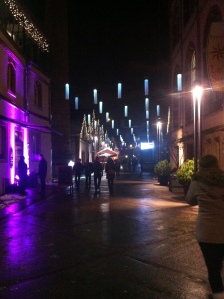 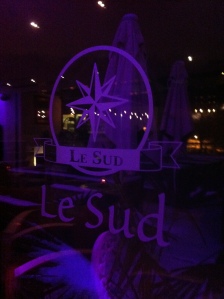