I awoke at 9 to the smell of what Claire called a fry: eggs, sausage, rashers, bacon, toast, beans. My brain may have been in slumber mode, but my stomach was wide awake.

And, just when I thought it couldn’t get any better, I looked out the window and saw – SNOW! The fat, fluffy kind that sort of drifts down like chunks of cumulus cloud. The best kind. Snow takes on a new level excitement when you live in the desert. It’s much like being little again and having a white Christmas or a snow day. I was absolutely galvanized when I arrived in the kitchen.

“It’s sticking, though,” Claire said, with a hint of dismay. “We might have to postpone our plans.”

“It’ll stop by two,” her father replied, with surprising authority. I wasn’t sure how he knew this exactly, but I guessed he was either very in tune with the weather, or the sky above Luxembourg was very obliging toward its meteorologists. I wasn’t too concerned about our plans, though they were exciting: a whirl around Schengen, quick jaunt across the border to Belgium for beer, home for dinner, a night on the town.

But right now, it was early, and there was a fry to be had.

I have to say this: Claire’s parents are fantastic people. Friendly, hospitable, and wise-cracking, it’s impossible not to feel comfortable around them. They’d kept Gretel up until two with a steady influx of beer, good stories, and a toasty fire. Now, we all sat around the table, piling baked beans onto toast, sipping coffee and tea, and swapping jokes and tall tales about people I’ve never met, but feel like I know intimately.

The Danes have a word for this feeling: hygge. It’s like the epitome of warm happiness. I imagine it’s how the Grinch felt when his heart grew three sizes. Claire’s kitchen, her family, us being reunited with Sido, and the snow piling up in drifts outside = hygge.

It didn’t stop by noon, so Claire and her mother opted for a dance class.

“It’s too dangerous to drive yet,” Claire said. “And the roads will be worse in Belgium.”

Gretel and I exchanged a glance – the roads were slushy, sure, but hailing from Minnesota and New Jersey respectively, we couldn’t understand the issue. So we did the best thing we could under the circumstances:

Return to the Chocolate House with Sido.

WARNING: This entry is about to get super hygge.

Braving the cold to be in the snow

Luxembourg’s Old Town reaches a new level of enchanting when its cobblestones and park benches are blanketed in snow. And, stumbling upon an ice skating rink properly placed beside a cheese market, the air saturated with the cinnamon musk of mulled wine, made me want to lace up some skates and slip around on the ice like a clumsy deer. If Claire had been with us, I bet she’d have known all of the people at the ice rink, including the agile man with the purse.

The Chocolate House was even more pleasant in the snow. The upstairs was crowded with pink-cheeked Luxembourgers dunking chocolate bricks into steaming milk while their scarves thawed over the chairbacks. A group of pre-teen girls giggled vivaciously at the corner table. We’d just about finished up when the girls broke out into a shy but well-meaning round of “Happy Birthday.”

Their waitress, hearing this, threw her hands up and addressed the rest of us in French and, much to the birthday girl’s blushing embarrassment, engaged the entire restaurant in a livelier rendition.

“Quel qu’un a un anniversaire aujord’hui?”** she called out after.

A trio at the table behind us singled out their friend, and the restaurant burst into song again.

**This is what I imagine is French for “Who else has a birthday today?” What it probably translates to is “Someone has an anniversary today?” And that’s being generous. 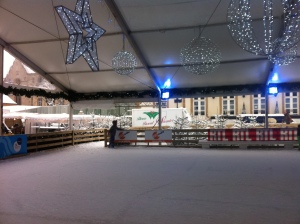 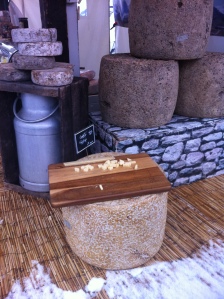