To See or Not to See: Rome and Nudity

I’d love to write more about Venice and whatever it was we did there after Café Lavena, but I don’t remember. This is not because I had one too many shots of grappa with the locals – which would be cool – but because monitoring 24 Egyptian teenagers is tiring. We had a flight to Rome departing from Venice at some ungodly morning hour the following day, so we had to wake at 3:30 AM to be downstairs for 4. Imaging hauling your luggage down cobbled Venetian streets along invisible, dark canals in the quiet predawn hours. Now imagine 24 kids behind you. It was loud. Above us, a woman flung open her shutters to regard us with mingled curiosity and annoyance as we lumbered along the canal to the bridge, where dedicated Carnevale revelers drunkenly careened around the steps.

By the time we reached the dock to await our boat, we’d covered 15 minutes of walking distance and were glistening with sweat in the frigid air. I also had the additional torture of having to pass the time in front of a bustling café that I could not duck into for some caffeine.

We arrived in Rome by ten. I’ll be up front. Rome is not my favorite city. I’m not sure why exactly, but its allure is lost on me. I’d been there 7 years ago, at 21, and found it tiring to navigate the busy streets and speeding vespas, all while clinging defiantly to my bag, daring a pickpocket to come at me.

I slept away the bus journey to our 2-star hotel, Pomezia, a sparse, ocher affair with friendly receptionists and a wide window that opened into the courtyard. The best part, though, was location: the hotel was a minute from Campo del Fiori and five minutes from Piazza Navona. This was a major improvement from last year’s seedy bed of moldy walls and broken water pipes outside Termini Station.

It was Ash Wednesday and we were off to the Vatican by public bus, always an experience with 24 students. They were tired. We were tired. Alex and I were positive we would catch a glimpse of the Pope, but alas. We’d missed the Papal Address by a few hours. Folding chairs were being stowed away and shuttled quietly out of St. Peter’s Square.

One thing I will say – the Sistine Chapel never ceases to amaze. Even the students, who trudged through in a stupor, came to view Michelangelo’s great work through impressed eyes.

Fun Fact: The ceiling lacks blue because blue was expensive to make. One needed either lapis lazuli or turquoise, and neither of those is cheap. Plus, Michelangelo apparently had to pay out of his own pocket for supplies. He wasn’t even really keen on doing it, being a sculptor and all, and then to buy the materials himself? That’s dedication. (Or coercion.)

Funner Fact: The Vatican cardinals disapproved of the nudity and asked Michelangelo to paint clothes over the naked bodies. He wouldn’t, so the Vatican commissioned another artist to do it, which is partly why Michelangelo painted his helpless self-portrait in the skin of St. Bartholomew. The cool part? When the Last Judgment was restored in the 90s, artists were told to remove the layers of paint – the clothes, essentially – where they could, thus restoring the saints, angels, and mortals to their glorious states of nakedness. How did they do it? Lasers.

We concluded our visit by dragging the kids into St. Peter’s Basilica, which I think is pretty cool, but they did not. David managed to dredge up some interest by telling them that there were dead bodies inside that they could see, which did invigorate the boys.

Our lovely guide, Sandra, obliged, hoping to divert the interest to the lovely mosaics above the deceased Popes, but most of the students preferred the bodies to the intricate and bold tile designs that were so carefully constructed they looked like paintings.

“They won’t even see that they are mosaics,” I heard her lament mostly to herself.

We left her with a generous tip and made our way to Piazza Navona for dinner at the same restaurant we took last year’s group, except this time we were shown to a room with paintings of naked women on the walls. And we’re not talking a woman just posing elegantly beside a river or something. In one, a woman knelt on the ground, head back, blindfolded – very Fifty Shades of Grey. Another depicted a breast being fondled by a disembodied hand. Alex and I were mildly horrified at the idea of shuffling our 24 Muslim teenagers into the room  and forcing them to ogle vaginas while eating their spaghetti, but David found it amusing. In the end, Alex and I asked the restaurant manager, who reminded me of Alan Cumming, to do something about them.

“Okay! Whatever you like!” he cried, hastily dashing about.

“This is your home now,” he said as he removed the boob painting. “But look – ” He gestured out the window to the closest of Piazza Navona’s three statues. ” – a butt. It is art.”

I thought about this for some time – about nude sculptures in the fountains, naked paintings in the Sistine Chapel – and decided that it’s okay to marvel at the human form when it is overhead in a museum, but less majestic to stare at it over a pizza. 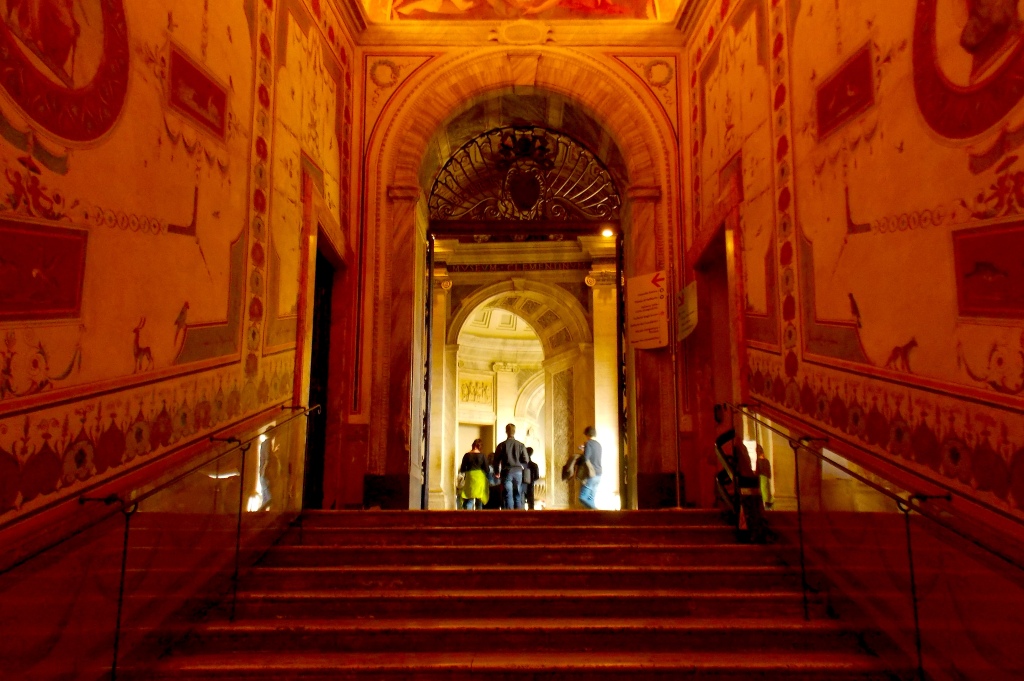