“She walked like an old woman”: Celebrity Sightings in Rome

Rome at the peak of the Circus Maximus must have been a city of noise, celebration, and drunken revel.

When invaded by Fyenoord fans, Rome is much the same.

On our last day, we stood in a state of wonder as all roads leading to the Spanish steps suddenly became clogged with armored police trucks spouting officers in riot gear into the streets. Above, a helicopter hovered above buildings. All of the designer shops – Louis Vuitton, Gucci – pulled their metal grilles down and manned the window displays with apprehensive-looking employees. An al fresco café whisked away its tables and chairs, while a shopkeeper and an employee swept up broken beer bottles outside a café doorway. Beside us, a jeweler scampered to the outdoor watch display and hastily removed the watches. All around us, Carabinieri tumbled out of police vans with shields and tear gas canisters.

At one point, a shirtless, drunken man stumbled down the road and slid into a police car. The officer at the wheel said something and his friend gently shoved the man on his way.

“If this were America, that guy would be on the ground in handcuffs,” Alex observed.

We lingered for a bit to watch, then ventured off to locate a café that Alex had raved about but couldn’t find. Mildly unhappy and tired and thirsty, we wound up in front of Armani’s main entrance and decided to wait for the students there.

At that exact moment, a black Mercedes rolled to a stop and 5-6 conservatively dressed men and women emerged, shielding the car’s occupant who disappeared into the store’s elegant interior escorted by statuesque, well-manicured employees. Our side of the street was suddenly abuzz with excitement, followed by a mass exodus to Armani’s shop windows. Inside, a concerned and uneasy-looking employee held the door shut. Curious, I crossed and approached a young, glamorous-looking Italian girl about my age.

“We think it was Sophia Loren!” she burst, galvanized.

“Well, she is old,” she began thoughtfully. “And she was walking like…an old woman.”

The three of us conspired about going inside, but the hole in Alex’s pants and my tattered Converse were no marks of couture, so we stood and speculated about her appointment and how long it might last and whether she might emerge from the front or the back.

In the end, we marched our kids back along Via del Corsa, contenting ourselves with a glimpse of her waiting Mercedes along a side street. I have to admit, I was feeling a little sullen about my anticlimactic celebrity sighting. Sighing, I finally raised my head and found Christoph Waltz standing on the sidewalk in front of me.

That is not how this went down.

“Oh my God, it’s Christoph Waltz!” Alex finished my thought, which was good, because I couldn’t believe it was really him. David was doubtful, too, until Alex tapped Mr. Waltz on the shoulder and said, “Excuse me, sir” and he snubbed us!

Gloriously ignored!
“If it wasn’t him, he would’ve replied,” David reasoned later.
I was a little sad, watching him ignore us and walk away. There he was, snapping photos with his iPhone, standing in the way of our 24 very confused students, and not even a glance.
“Who is he, miss?”
“What does he sing?”
When we left Rome much later that evening, a midnight flight conveying us back to Cairo, I decided that Italy’s capital isn’t so bad after all. Whether you’re there to ogle architecture or designer shop windows or Austrian celebrities, it has something for everyone.

A shopkeep sweeps broken beer bottles from his stoop 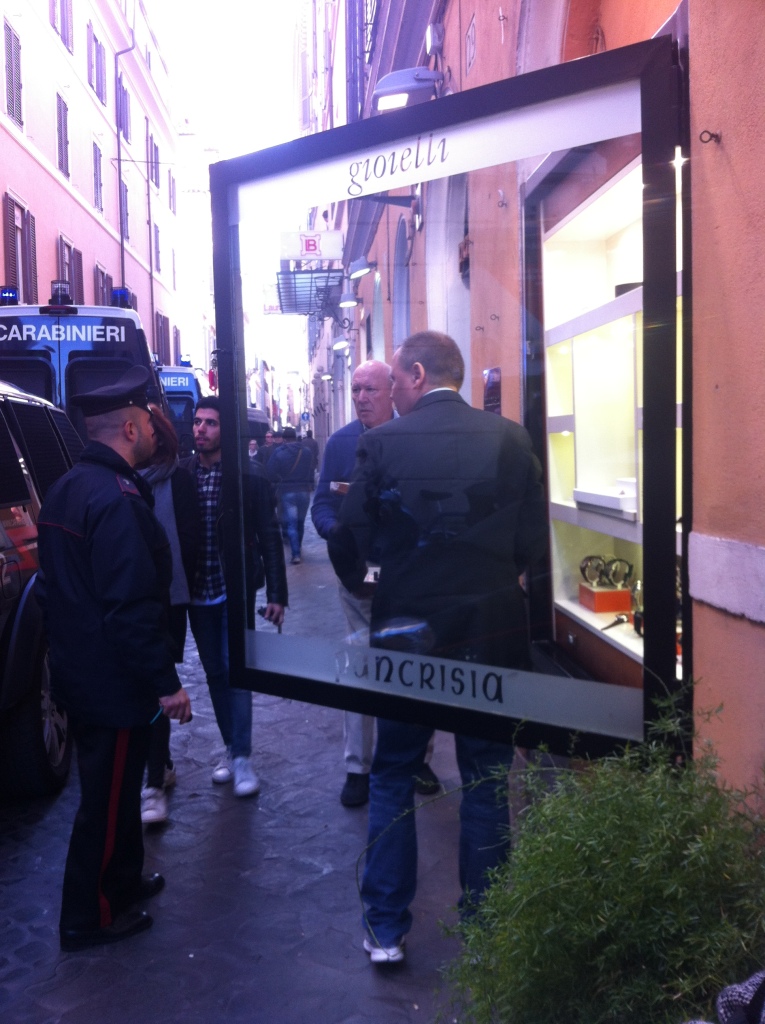 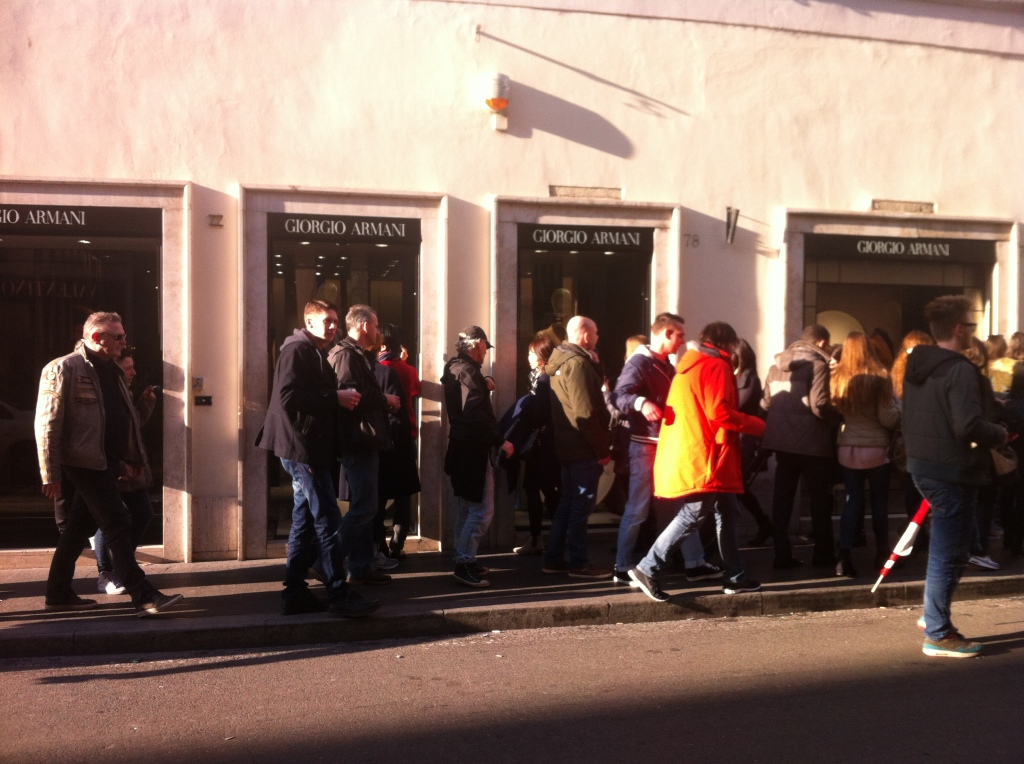 Crowds flock to Armani to catch a glimpse of Sophia Loren, ,or just a rich elderly woman