It Took Me a Day to Get Here

Greetings from Manila, or the farthest I’ve ever been from home!* It’s taken me nearly 24 hours to get here, which doesn’t sound like much when you compare it with other lengthy journeys, like the recent Pluto pass, but in Earth terms, it’s a hell of a lot more than a hop, skip, and a jump.

I first flew from Newark to Toronto, an easy 1.5 hour journey on an Air Canada flight out of Newark’s outdated and very 70s looking Terminal A. The terminal looked like a cross between a cosmic bowling alley and the airports in When Harry Met Sally. They announce flight times using plastic cards over the check-in desks. Writing this, I felt a little snobbish, but really. Get with the times, Newark. Even Cairo has digital announcement boards, though they’re always wrong because no flight leaves or boards when it claims it will.

If anything, Newark’s shoddy Terminal A served only to contrast the immaculate glitz of Toronto’s Pearson airport, which marks the first time I’ve ever set foot on Canadian soil. (More accurately: on Canadian tile.) I was immediately greeted with world famous Canadian hospitality, having a chat with one of the immigrations officers about Egypt and his neighbors. Once through, I found myself with three viable options of reaching my gate: walking, a moveable sidewalk, and a faster moveable sidewalk. That’s right. In Toronto, you can pick if you want to take your time observing the scenery or practically zipline to your gate. I’ll admit, the faster sidewalk was a bit daunting; you roll your luggage onto a step and are jerked forward to the sound of clicks and gears as the sidewalk extends itself. I’ve never seen Transformers, but I imagine this is how those cars sound when they’re turning into giant robots.

Unlike Terminal A’s torn leather seats and carpeted interior – I can’t stress to you how much this terminal reminded me of the ferry Jamie and I took from Helsinki to Tallinn – Toronto’s airport featured rows of smooth white tables mounted with iPads. Emerging from the sidewalk, I saw before me a cavernous room with spacious gates. And a Tim Horton’s. I was truly in Canada.

But not for long.

I met up with two other girls en route to Manila and we chatted for a half an hour prior to boarding, when I left them because I’d bumped up to Business Class. I realize that this may lead them to perceive me as either very wealthy or very reckless with my cash, but neither is true.

When I saw that a 15-hour flight awaited me, I called Air Canada – it was the first time I’ve flown with them – to ask about upgrading to Business. I was told, a week before, that it would be between 3,000 and 4,000 USD.

While it wasn’t that low, it was still significantly lower than 3,000. So I took it. And I don’t regret a cent of it. I got my own little bed pod with my own little overhead compartment. Like Lufthansa’s Business Class, I got a little Air Canada purse with a toothbrush kit, socks, an eye mask, ear plugs, and slippers.

If you’ve never flown Business, you have to try it. You forget you’re on an airplane. The flight attendants distribute menus with wine selections chosen by their chefs – after delivering you a mimosa, of course. They take your order by seat number. They top up your wine glass as often as you want. You can fly over the Atlantic horizontal. I think I’ll be needing to do this every time now. If I have to choose between sitting upright for 15 hours or kicking my feet up and watching Baby Mama while dining on lobster, I’m going with the latter.

What was also cool was that we flew over the arctic. I didn’t realize this was happening until I went into the bathroom, which I told the other girls later.

“I looked out the bathroom window and saw ice chunks and thought…we’re over the arctic! I checked my flight map and saw that we were flying over northern Canada. So cool!”

“You had a window in your bathroom?”

We had to circle Hong Kong’s airport for a while because of “weather,” and ended up landing ten minutes before our flight to Manila was to board. Luckily, it was delayed, giving us plenty of time to sweep through Hong Kong’s bustling airport and onward to our gate. The last leg of our journey was operated by Cathay Pacific, which was a very enjoyable little flight with excellent seatback entertainment. After three episodes of Glee, we touched down in Manila.

I’ve been reading IIlustrado, a novel by Filipino author Miguel Syjuco. I’d just finished reading about his arrival in Manila, where he described the airplane landing as rough, expressed relief that it wasn’t a water landing, and mused at how people on the plane applauded the pilot and got up before the plane had finished taxiing, to the chagrin of the flight attendants. What I gathered from this is Filipinos and Egyptians are not so different. Unfortunately, there was no clapping at all, but multiple announcements were made for people to sit down after a dozen men and women unbuckled their seatbelts before the plane had completed its landing.

I’d also been told that Manila’s Ninoy Aquino airport would be a hotbed of melee and disorganization. Not quite. Let me give you a comparison here:

Arriving in the US and/or the UK means long lines. We’re talking 30+ minutes for the UK and maybe 25 for the US. But its not the lines that’ll get you in Newark. It’s the baggage. Every time I’ve flown into Newark, I’ve waited for my bags for at least 30 minutes. And if I want a cart for the bags, I have to pay a whopping $6. I could buy almost 3 beers for that in Cairo. Stop obstructing my beer consumption, Newark.

With that in mind, note that we were basically whisked through immigration without any hassle. Our pick-up person, a cheerful man named Noli, was waiting for us at the bottom of the escalator, holding a large sign with our names on it. We picked up luggage carts – for free – and walked over to our carousel where my bags, which had come from Newark and flown on three different aircrafts and two different airlines, were already waiting to be claimed. Unreal.

Noli said that this was because Terminal 3 is the most modern and efficient of the airport terminals. Most airlines, he said, promise your bags in 12 minutes – the time it takes you to get from the gate and through immigration. Cairo, I get it, it’s not efficient. But Newark? Get yourself together. You’re shameful

Traffic wasn’t too bad getting to our flats. I’m in a high rise, which is strange for me and nervewracking because I’m afraid of earthquakes, but the view is spectacular. I love wakeful, glittering cityscapes at night, and that’s exactly what I got. This morning, I noticed the American Cemetery from my window.

While I could go on, I’m going to stop abruptly instead and save my first impressions about Manila for another article, because there are too many. 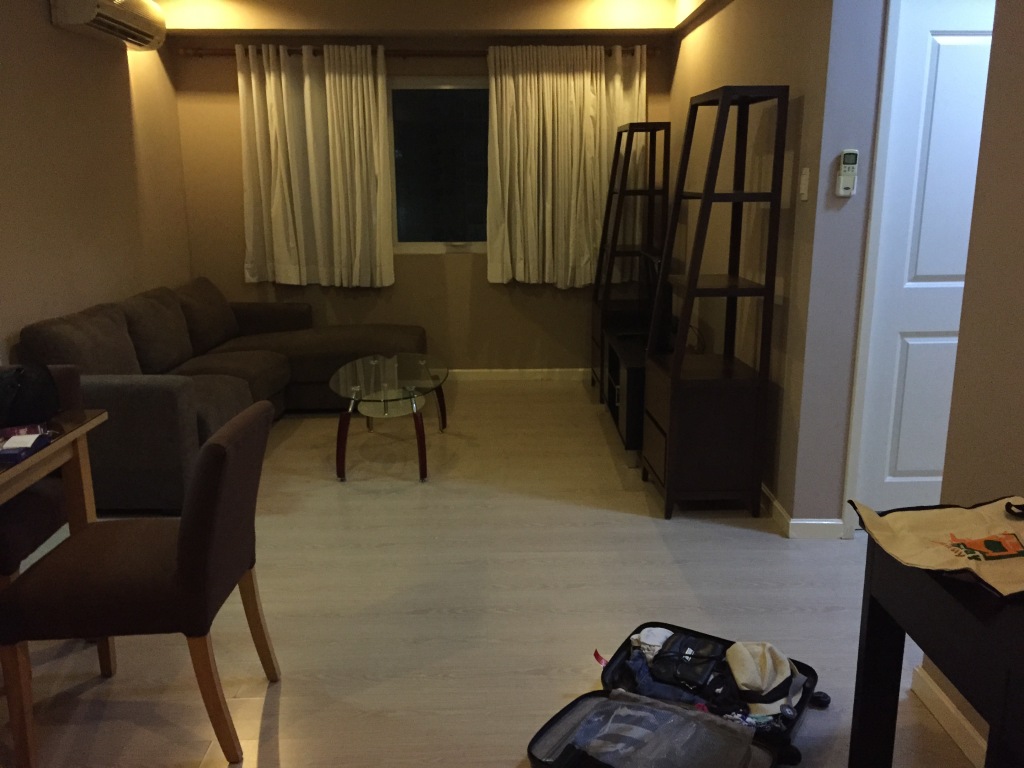 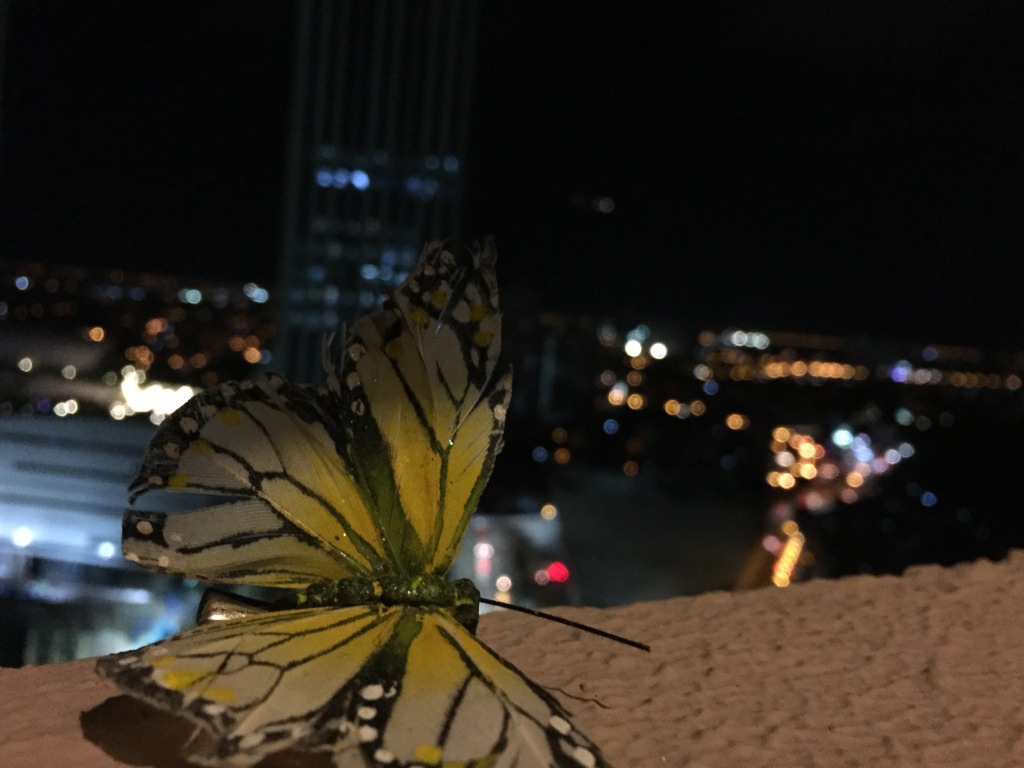 Gretel’s butterfly taking in the view of Manila at night 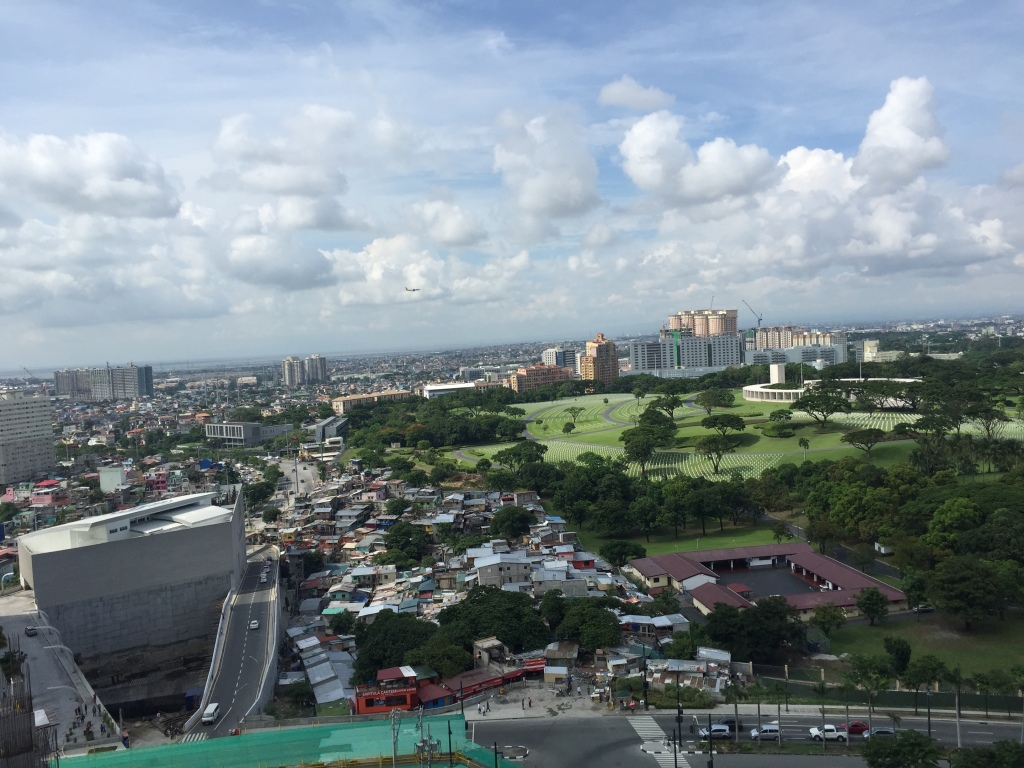 Good day, to you! American Cemetery to the right, city to the left.

*I’ve been as far as Cambodia/Vietnam. Just not coming from the US.