October break makes me long for fall, but I’m not sure where to find my fave season here in the Philippines. Instead, I opted for summer and joined some friends on an island where we basically did nothing but lounge, recuperate, and marvel at the stunning scenery.

I don’t often dole out travel tips in this blog, but here’s one for those of you who are keen to visit the Philippines: travel between Manila and islands takes a day. I’m not exaggerating.

We arrived bright-eyed at the airport by 11:30am for our 1:00pm flight, dined on beer and hot wings at Shakey’s – named for a guy who had the shakes after a nasty bout of malaria – and made our way to the boarding area in time to hear the word DELAY over the tannoy. Three San Migs and three full hours later, we finally departed Manila, arriving at Puerto Princesa to the poor driver our resort had sent with his van four hours ago.

We finally make it to Puerto Princesa!

From Puerto Princesa to Sabang Beach, it took another two hours – including a stop for fuel and more San Migs – of whipping around winding roads at breakneck pace. Of the five of us, at least three felt nauseous. We remedied this by singing old pop punk songs. Did I mention that by now it was dark? It was.

I think we arrived at the resort at 7pm, nearly nine hours after leaving our flats in Manila. (The journey home was similar, with 8 hours of traveling, a delayed flight, circling the airport, and Friday evening Manila traffic.)

I’m not complaining; I am suggesting you avoid booking connecting flights if you’re doing any island hopping when visiting the Philippines.

There is an obvious perk to the fact that good beaches are hard to reach – they’re pretty much empty. In the six days we spent at Daluyon, the stretch of beach from our resort down to the wharf was barren of sunbathers, hawkers, and crowds. It was quiet. It was not Sandy Hook in the summer.

I would describe the beach to you, – the precise softness of the sand, the various bands of blue across the sea, the joy at wading in up to my neck and still being able to see my toes – but the photos do a much better job of it. Picture a hammock, a warm breeze, a pina colada, and Zac Brown Band, and you have an idea of what my week has been like. 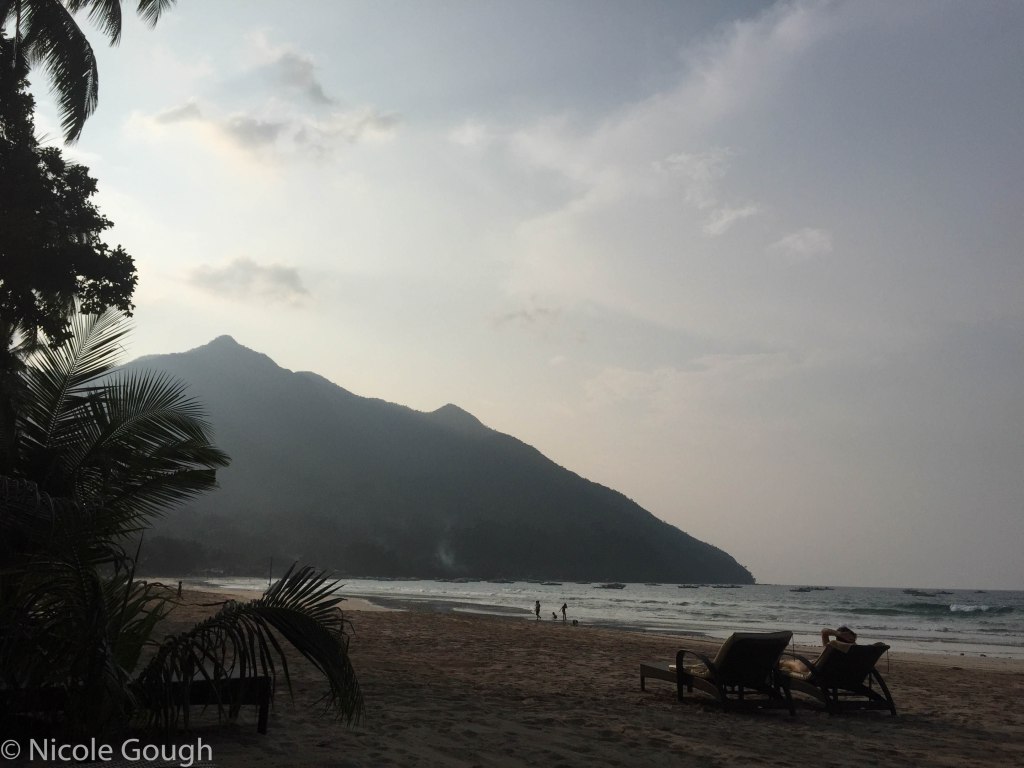 The moon over Sabang

On our second full day, Brad booked a tour that included Sabang’s famous underground river and a jungle trek back to our resort. We were all pretty stoked to see some wildlife – apart from the monitor lizard that meandered around our resort and a stray dog we’d named Henrietta who’d taken to following us around the beach and back to our huts – so we slathered on the bug spray and headed down to the wharf.

The underground river was a mere ten-minute boat journey away. We were all deposited on another beach, led through some trees, and forced into bright orange life vests tagged with the tour company’s name: Ding-Dong. Once in the boat, we were paddled toward the entrance of what looked like a giant cavern, not unlike Lebanon’s jetta grotto. Sam was tasked with holding a battery-powered light that our guide used to highlight oddly-formed stalactites and stalagmites.

“Left sir, slowly sir, up a little sir, yes,” he would direct in monotone. “Cucumber.”

We were paddling through a section of river the guide had labeled “the marketplace,” where all of the stalactites resembled various produce.

Somewhere between the marketplace and the highway, the images changed from eggplant and mango to the profile of Jesus Christ. Apart from the odd narration, the river itself was vast and beautiful. Bats dangled upside down from the ceiling above us, some of them wheeling close over our heads. I didn’t mind this in the end, because bats eat mosquitos, and every time Sam shone the light near me, he illuminated dozens of long-legged mosquitos drifting quietly toward my face. I couldn’t help but wonder whether malaria mosquitos survived in underground caverns.

Entrance to the underground river – check out that water!

Once we emerged and shed our life vests, we were led to the trailhead marking the 3km jungle trek. When told it would take two hours, we all laughed a little. 3km in two hours? We’re young and fit! I remembered running 5k in 25 minutes. This would be a cake walk.

We edged onto the trail after ogling a monitor lizard that traipsed by, intrigued by a nearby barbecue. Our guide turned to us almost immediately.

“We start with 400 steps,” he told us, pointing to a series of wobbly wooden stairs leading up the mountain at a near-vertical angle.

In the end, it did take us two hours to reach the end of the trail. By this time, we were all glistening with sweat, our clothes plastered to our bodies, our ears ringing with the buzz of insects. Along the way, we’d spotted some insects that were at once terrifying and exciting. There was a giant millipede, which was disturbing in size yet rather bored with us; a spiky-looking, also mammoth-sized centipede that our guide was quick to pull us back from, crying, “It’s poisonous!”; dozens of long-legged spiders with extra-long feelers; and a quick glimpse of a monkey’s backside as it crossed the path.

And while I would be less than delighted to find one of those things crawling over my bare feet at night, I had to admit that finding life – albeit leggy and squirm-worthy – abounding in the jungle was refreshing. Cairo’s “wildlife” is hardened and dust-weary. The Philippines breeds colorful, vibrant, and fatal creatures in great numbers.

Ambitious and optimistic at the start of our trek! 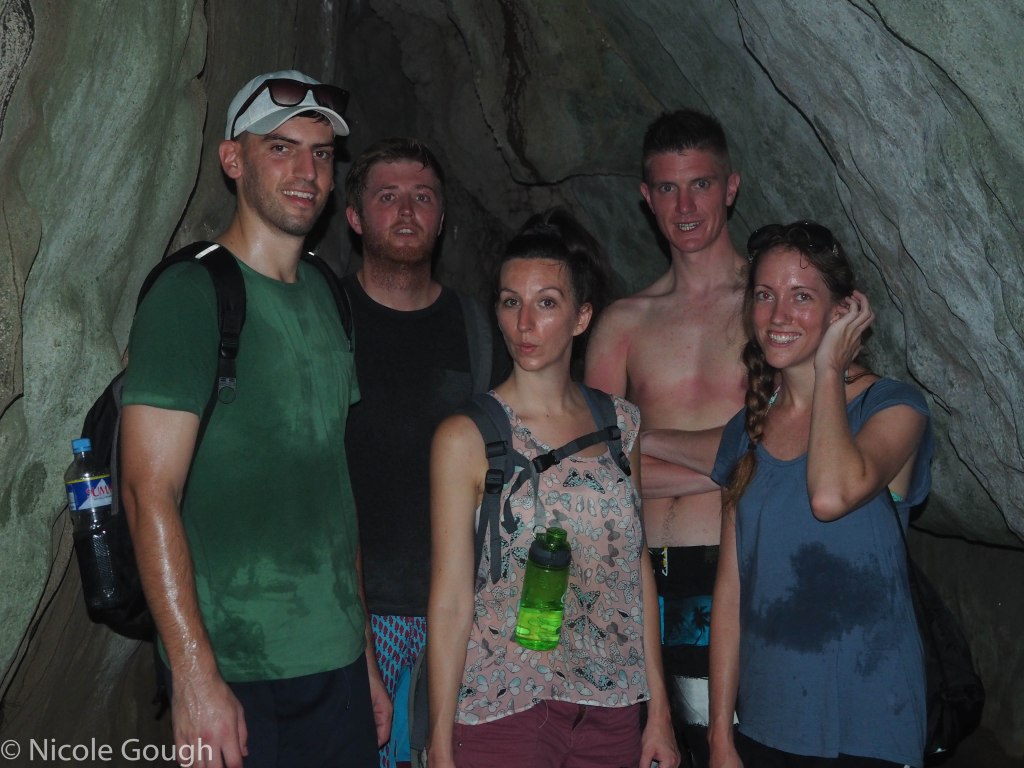 Join us in our really sweaty, stinky cave.

At the end of the trail, we were told that our resort was still a bit of a walk away. If we wanted, we could hike inland about ten minutes and take a zipline directly to our beach. Obviously, this was a less sweaty option, and so we climbed up to the zipline platform where Henrietta was inexplicably awaiting our arrival.

I’d never been on a zipline before, so this was especially exciting for me. It wasn’t high up, nor was it all that fast, but it did briskly convey passengers over a stretch of clear ocean, which made it all the more breathtaking. And it provided a much-needed breeze. Perhaps I could air my armpits simultaneously.

If I’d been feeling tired after the hike, the zipline and its accompanying adrenaline rush solved that right away. Whee! It makes me want to try ziplining again, but higher up and faster. I’m building up a tolerance for adrenaline rushes.

The day ended with a much-needed swim in the ocean, and then grilled, freshly-caught fish down the road at a child’s birthday party. (We were not associated with the child in any way, nor were we invited to its birthday party. Our willingness to purchase the fish scored us a table within range of the speaker, blaring more versions of Happy Birthday than you imagined existed.)

Sam and Brad left the next morning to travel to El Nido. I had originally debated joining them, but I realized that, in my old age, lounging on the same beach for six straight days sounded more appealing than backpacking up to El Nido for only two nights.

Ah, the joys of a good breeze and a cool cocktail. 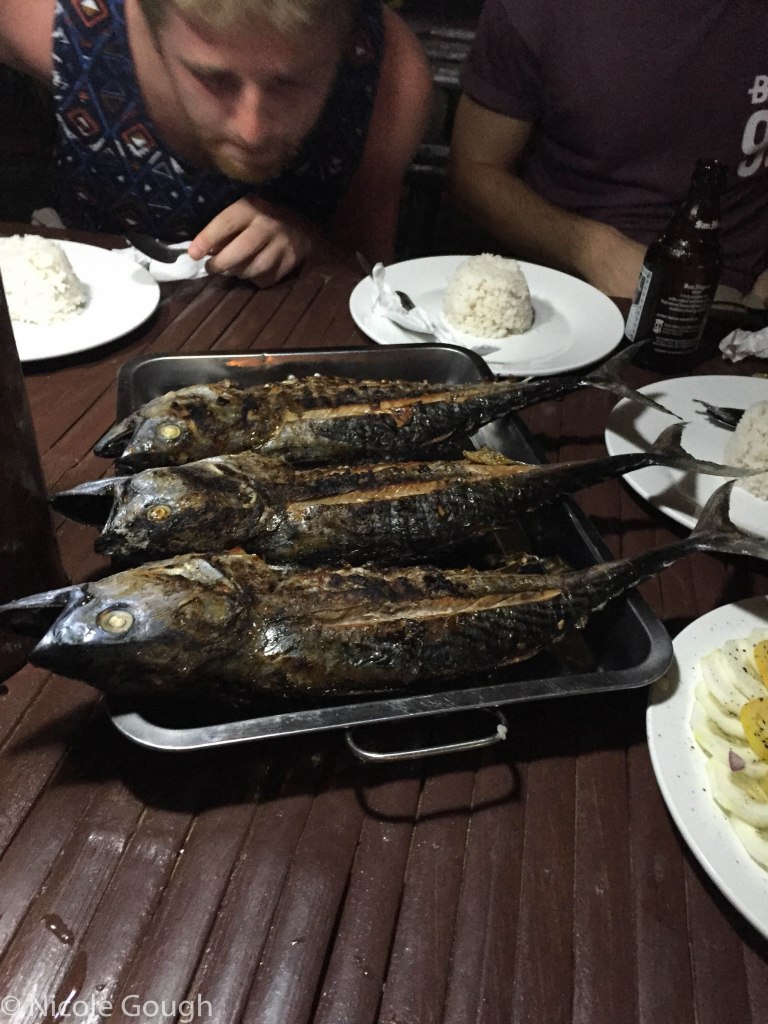