I like to think of myself as something of a gastro-nomad, roaming the globe in search of good cuisine. There’s a small cohort of friends that would disagree with that statement based on my culinary choices in Manila (cheeseburgers), but drop me in an alley in Istanbul and you can bet your bottom lira I’ll be chowing down on donor kebab.

I’d sampled a smattering of Norwegian food during my time in both Longyearbyen and in Oslo, and I thought I’d round my trip out with one last Norwegian fine dining experience. I’d spent my last day in Oslo meandering through Frogner Park’s snowy Christmas market, sipping glogg near the ice skating rink beside a robotic moose head that occasionally belched out Christmas carols best left to the velvety vocals of Dean Martin. It was the perfect marriage of hokey and cheery.

Back at my hotel, I asked the receptionist for a restaurant where I could sample some unique Norwegian food. Lorry, located just down the street, was an easy choice: proximity and quality cuisine for the win.

Reviews on TripAdvisor were mostly positive: superb atmosphere, good food, friendly staff. One older woman even has lunch there regularly and reports back with helpful advice such as, “My lunch here was OK. Usually is.” This was compelling.

The menu boasted all sorts of Norwegian specialities, including reindeer burger with lingonberries. (Totally different from a cheeseburger! What cheeseburger do you know that comes with berries?)

I bundled up and headed out, pushing through the door and into a crowded and cheerful interior that immediately warmed me up. The staff seemed pretty busy, darting from packed table to packed table, so I waddled over to a service station and asked to be seated.

“Tonight we are only serving Norwegian Christmas dinner,” the hostess told me with a smile.

I stood a conflicted woman, torn between hightailing it out of Lorry in feverish pursuit of reindeer meat, or going all in.

I could hear Sam’s disapproving voice in the back of my head: “All you eat is buh-guhs*.”

“That’s fine,” I told her, and she escorted me to a tiny table across from several booths crammed with hulky Norwegian men. The menu included five options, which ranged from super out of my comfort zone (ludefisk) to moderately pushing the envelope (pork or lamb). In the end, I went with lamb. I know, it’s a conservative choice and you all thought that I was taking a risk and trying something crazy. You should know me better.

My server recommended a light but crisp beer to complement the salty lamb. This was accompanied by a large shot glass full of something, with no explanation of what it was or what I was meant to do with it.

I furtively glanced at the Norwegian woodsmen, who I now realized were donning dress clothes – along with practically everyone else in the restaurant except me, I noticed in panic, with my lint-covered fleece and tattered jeans suggesting I was someone’s poor cousin who stumbled out of a crawl space and into a dinner party – and watched as they occasionally sipped from the glass in between tales of barehandedly wrestling polar bears.

Thank God I did not take this as a shot.

This is the kind of stuff you dab on the lips of a person who appears to be dead and needs waking up. I nearly choked after the first sip, although I did suddenly feel pleasantly hot and tingly.

“What’s this?” I asked my server as she zipped past.

Strong is one word for it. Akevitt is a kind of palate cleanser that is unique to Scandinavia and has high standards: in order for something to be called akevitt, it must have at least a 37.5% ABV. Loiten linie, the stuff I was drinking, is even more unique in that it’s Norwegian and spends a good portion of its life sailing to Australia and back in barrels. Hence the name loiten linie, which means something like “crossing the line.” It’s 41.5% ABV.

I barely had time to Google this before the waitress returned with a helping of food so huge it looked like it was being served on a hubcap. It appeared that an entire, rather large young lamb had sacrificed itself atop a pyre of mashed Swedes, with a Norwegian Christmas sausage nestled at the bottom. It all came with a small bowl of gravy. Now, I’m not saying that this food looked unappetizing. In fact, I was excited to try some new cuisine. But this was a meal that could probably be split four ways.

Could it be that Norway was playing a cruel trick on me? I looked around. No one was pointing and laughing at me, but no one had gotten their food yet either, so there was no way to tell if this was normal.

I was about to tuck in when the waitress returned with a bowl of 18 potatoes.

I tried to look nonchalant, as if I regularly walked onto farms and ate all the animals.

“Enjoy!” the server said. “When you are finished, you get a second helping.”

But why? Is this meal supposed to last me through the new year?

I dug in. I’m not going to brag, but I made a valiant effort. I ate the sausage, the Swedes – a turnip-like root, not Swedish people – and made my way through the lamb, which was extremely salty but paired excellently with the beer. By the time I got to the potatoes, I felt like that kid in Matilda who is forced to eat an entire chocolate cake. Of the 18 potatoes, I managed to eat four. And I love potatoes. It was a tragedy. 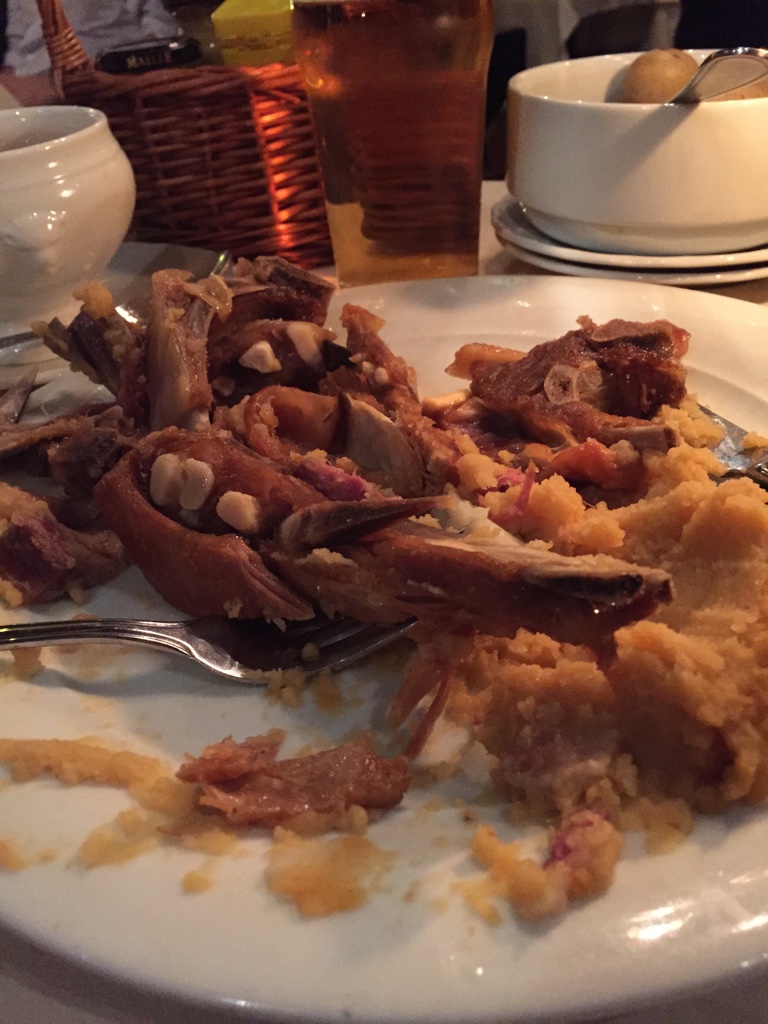 At this point, I noticed the rugged Norwegian men at the nearby booth. They’d ordered ludefisk, which came with the same assortment and quantity of sides that I’d been given. Each man received his own platter. Each man asked for seconds.

By the time I stood up to go, I felt giddy, and I’d only drunk half of the akevitt. As I rolled my bulging body back to the hotel, I silently cursed all those who shunned my cheeseburger-loving.

“See? This is what happens when I try something new!”

I managed to keep my pants buttoned all the way to the hotel, where I was greeted by bright lights and a svelte Norwegian model standing in the lobby in his underwear.

“Welcome!” he shouted at me. “I bet you weren’t expecting this kind of welcome!”

I stared. Another popped his head out from the dining room, wearing underwear and a giant fur coat. He waved.

I had nothing to give, my entire body concerting all of its efforts on digestion. Later, in my hotel room, I thought of that famously irritating 12 Days of Christmas song, and decided that if Norway produced a version, it would be far more entertaining, because who doesn’t want 18 potatoes and 2 underwear models on Christmas?

A street in Oslo

Walking off the feast