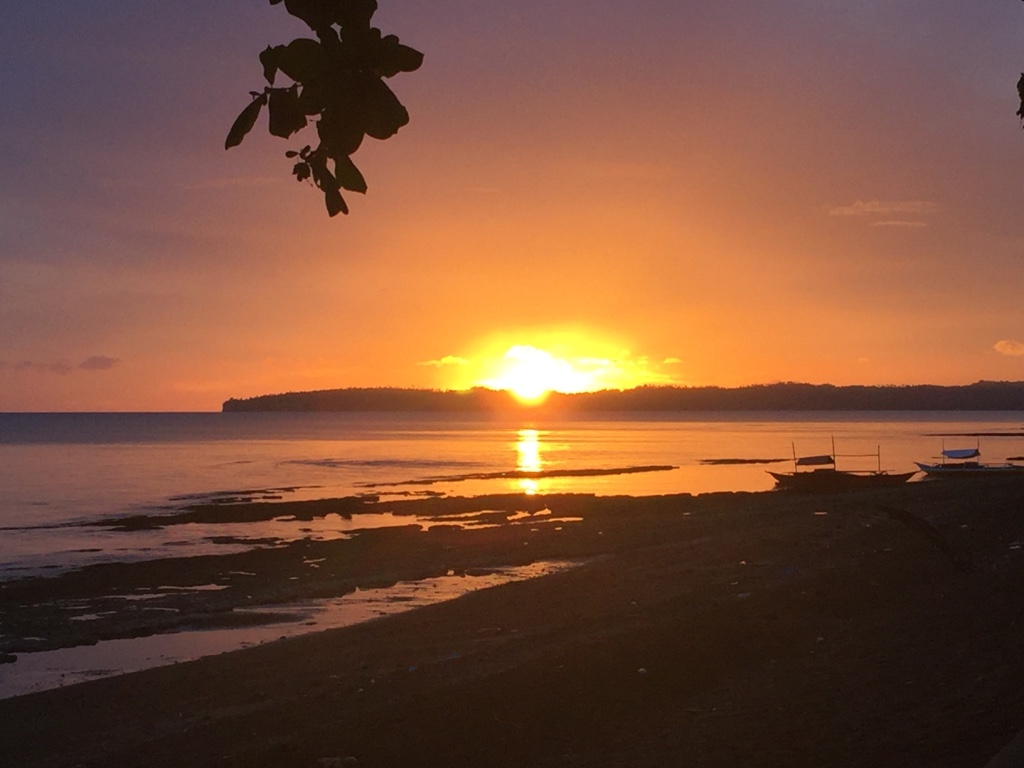 You won’t be surprised to hear that Sarah and I did not want to leave the Oriental the next morning.

“We could stay here one more night,” Sarah said at one point, echoing my own sentiments. It was tempting, but the allure of Donsol partly stemmed from the fact that my sister, Kacey, and her two friends were arriving the morning of the 19th, so we would need to be there.

Instead, Sarah and I spent the next morning and most of the afternoon mincing around, prolonging our stay as long as possible, having lunch, taking in the formidable view of Mount Mayon from the restaurant window.

During this time, I juggled texting Elliot – my fabulous friend who was meeting everyone and possibly taking them for a quaint night on the town -, texting my sister, texting the driver who was waiting for them, and setting low expectations for Vitton Resort in Donsol.

“Let’s set the bar low. That way we can be surprised if it’s not true. It’s going to be buggy,” Sarah began.

“The floors will be covered in ants. Completely covered. We won’t be able to walk.”

“Yup. The restaurant will have no food…”

We went on like this for some time, and then decided to make the drive to Vitton and find out for ourselves.

From Legazpi to Vitton Resort, Google Maps declared it would take one hour. We set off in high spirits until G-Maps led us down a rural road that abruptly ended. With no warning.

This added an extra hour to our trip.

When we finally arrived at Vitton, after driving through a rainy and empty Donsol town, we were welcomed by a friendly receptionist, Annie, and her three adorable, fluffy kittens. It’s impossible to feel fraught with worry when you are welcomed by kittens. (Take note, seedy hotels. Bad plumbing and cockroaches? Cancel them out with a kitten. But make sure it’s clean.)

Annie informed us that it was off-season. We’d gone to Donsol with hopes of spotting whale sharks. The season for sighting them ended anywhere from mid to late June, but Annie told us that the last one had been spotted 3 weeks ago. Divers were still catching the occasional glimpse near the Manta Bowl, but that was two hours away by boat.

Since it was off-season and they were renovating the facilities, Annie gave us two rooms in a building away from construction, with balconies overlooking the clean pool and the beach.

“You’re basically the only ones at the hotel,” she told us.

This was true. Sarah and I explored the tourism center next door and inquired about island hopping, since I desperately wanted my sister and Kacey and co. to actually glimpse the beautiful beaches that make the Philippines so remarkable. 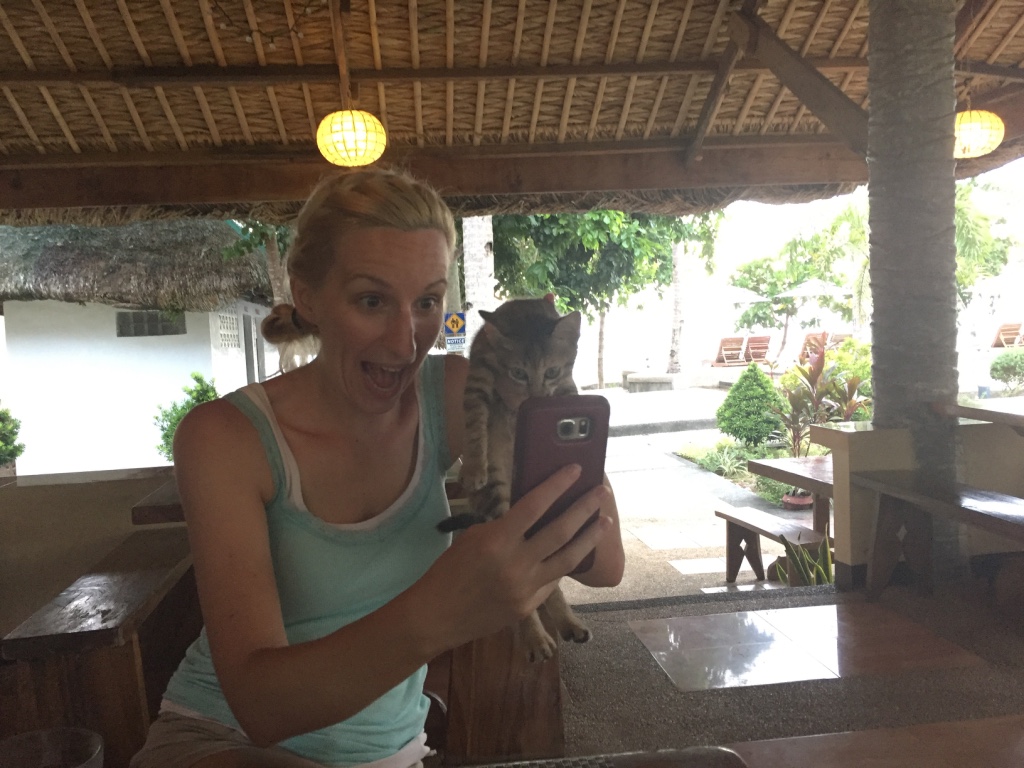 We dined on a limited menu at the restaurant. This was disappointing, as all reviews spoke highly of the chilled mango cake. Annie, our wonderful host, told us that if we gave the kitchen a list of food that we liked, they would get it from the market and prepare menu items for us. Including mango cake.

That night, we had vegetable curry and took serious advantage of the happy hour specials. This resulted in a semi-light night playing Pass the Pigs and meeting a fellow traveler named Hannah, a Google employee who was diving the Manta Bowl in the morning and seemed keen to check out the river firefly tour with us.

I could’ve sat up for hours. I was so excited about my sister’s arrival the following morning – at the fresh, early hour of 7:30 – that I couldn’t think about much else. Of course, Elliot was texting to tell me that the quaint night I’d imagined was far from what was actually happening. At 2am, I got a text from him saying they were all at Ringside and two of them were reffing a midget boxing match.

They had to leave for their flight at 3am.

It is a miracle they made it, for so many reasons, but I’ll let them tell that story. I look forward to hearing it myself. 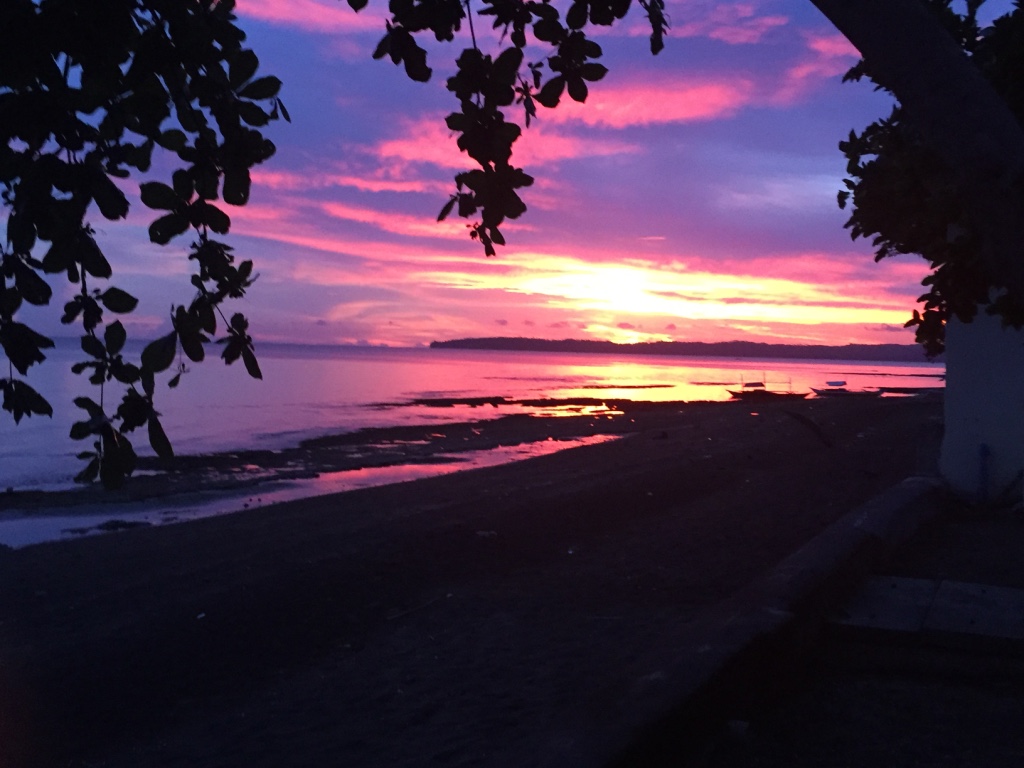