Bluegrass in the Big Horns

It wasn’t until 7:30pm that we rolled into the small town of Buffalo, Wyoming. Upon arriving, we noticed that the single main street was cordoned off with cones and packed with what looked to be the entire population of the town. Exhausted, we decided we wouldn’t go grocery shopping after all. Instead, we reasoned, we would find a campsite, and we would look for a place to have dinner.

Stopping at a gas station to ask, the attendant suggested we visit the Dash Inn, across the road from the Bozeman Steakhouse. This we did. You might find it strange that instead of first securing a campsite, or perhaps being a bit more concerned about finding a campsite based on the fact that there seemed to be some kind of festival going on, but Laura and I were so hungry that we parked near the campsite and quickly made our way to the Dash Inn.

Immediately after entering, we realized that this was not a place we were going to want to eat dinner. The place was not a restaurant, but a seat-yourself type affair, where you could approach a register and order off a board behind it. Prices were reasonable; a hot dog was about a dollar, a cheeseburger $2.75. But it was more the ambiance of the place that was worrisome.

As soon as we opened the door, we noticed that everyone seated there was dining in complete silence, which was slightly spooky. And so, we made our way across the road to the Bozeman Steakhouse.

We noticed a large sign outside marking the start of some kind of trail. It was the sign that attracted us, not so much the trail, because the sign, in very large letters,  warned potential walkers of the danger of falling over and becoming seriously injured. At first, we thought this was a joke from the bar, directed at staggering drunks, but upon closer look it seemed like the sign was in earnest. And so, intrigued as to what type of trail ran behind the restaurant that was so precarious, we decided to investigate.

Walking onto the trail, we observed that it was mostly pebbly, so perhaps if you were older, frail, or clumsy, a misstep could be painful. On the left of the trail was an old conestoga wagon with a plaque detailing a brief history about the Oregon Trail and pioneers heading west. Apart from this, the trail continued to loop behind the restaurant with nothing else apart from two more large warning signs.

By the time we completed the trail, we sat down in front of the restaurant and were crippled with delirium and laughter that only comes from 9 hours of driving on 3 hours of sleep. We went into the restaurant, Laura carrying a large, sugary Big Gulp in an attempt to stay awake.

They take safety seriously in Buffalo. 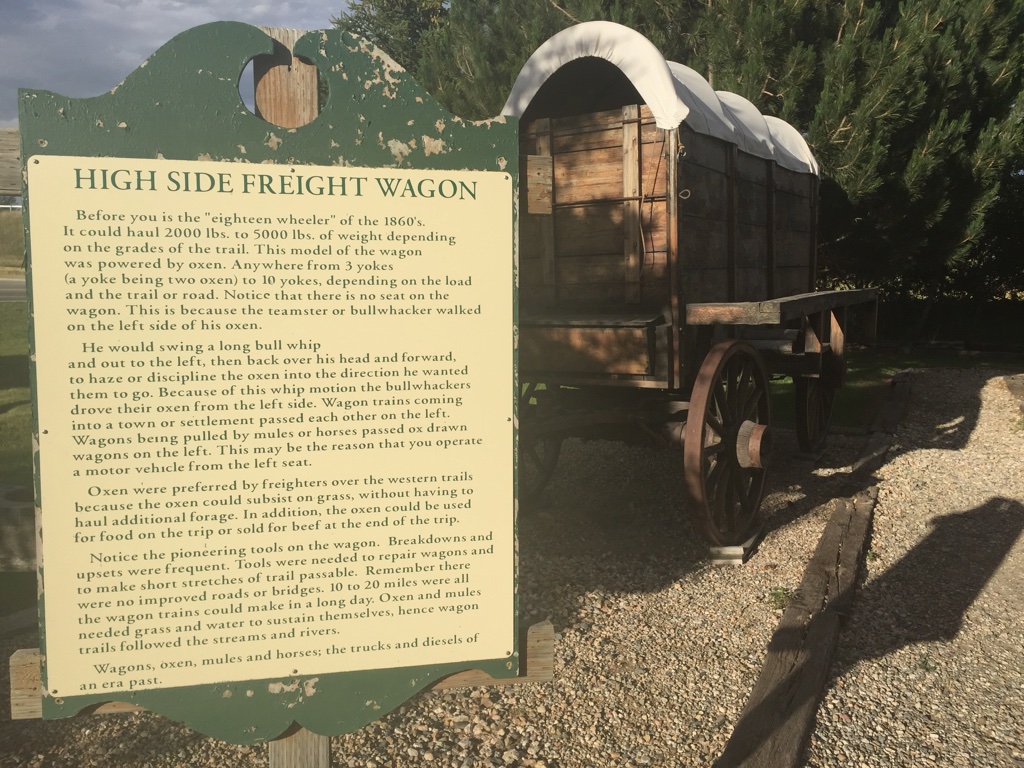 We ate and decided to shell out $30 for Indian Creek campground, where we could park and promptly fall asleep.

Defeated, we did the only thing that seemed reasonable: we drove our van across the street, back to the restaurant, and resolved to go into the bar, order two pints of beer, and ask the bartenders how feasible it would be for us to park in a lot and sleep there.

As soon as we got into the bar, we ordered two pints of Moose Drool and asked the bartenders what to do. The first, an older woman, explained that finding campsites was going to be pretty difficult as there were multiple festivals going on in Buffalo that weekend.

“What are these festivals?” I finally asked.

“Well, there’s a town festival celebrating a local writer that grew up here, and there’s also a bluegrass festival on the fairgrounds by the mountain.”

It was when she said this that Laura and I felt slammed by a second wind. Fiddles? Banjos? I’m awake.

The bartender disappeared and returned with a newsletter detailing the schedule for the festival, which included a 9:15 open mic session. It was 8:45.

Laura and I were thrilled and explained how we were traveling to play open mics. She said there was probably camping there, but if not, we could park across the road at the McDonalds.

“You could always camp behind my house by the Beano’s. I have a spot back there,” suggested a young bartender with a southern accent.

Galvanized and wide awake, we chugged our 22 ounces of Moose Drool, lamenting a little about how we felt pretty dirty after submerging ourselves in that stagnant pond.

The southern bartender scrunched her face, and then said, “There’s a creek that runs through the town if you wanted to wash off in there. It’s running water and should be pretty clean.”

Bathing in a creek? Where were we?

Instead, we finished our beers, jumped into the van, and headed up the mountain. We were immediately greeted by three friendly women, who said that camping would be a mere $15 – and it was available.

“Tickets for the weekend are $90,” she continued. “But someone donated two tickets, so you can have them for free if you want.”

Dizzy with luck, we drove into the fairgrounds, quickly found a suitable space beside a horse stall, and headed straight down to inquire about the open mic.

“Oh my God, I’m so excited. I’m going to have a heart attack. I can’t breathe,” Laura gushed as we walked down.

We located Stage 2, where the open mic was to take place, and found ourselves standing in a spacious, fluorescent-lit, empty room. There was a sign-up notebook near the stage, but no one was there and the session should’ve begun ten minutes ago.

Maybe under different circumstances we might’ve been disappointed, but there was a band about to take the main stage, and nothing quashes disappointment quite like a banjo.

Laura went to the ATM to withdraw beer money and procured us some more Moose Drool.

Later, she told me that she’d withdrawn $120 for beers, which seemed a little ambitious, but I liked where her head was at.

We made our way to the front of an impressive crowd all snug on lawn chairs, to the front of the lawn by the stage. The Jalan Crossland Band was kicking up a contagious energy, and bluegrass lovers all around us were stomping their boots and swinging each other around.

It was just past midnight when they wrapped it up, but the festival wasn’t over. Our schedule advertised “Parking Lot Pickin'”, a few hours of jam sessions throughout the campgrounds. We returned to our van and pulled out our guitars, strummed a few of the songs we’d performed so many times together, and then decided to wander around and see where the music was.

It wasn’t hard to find. Groups of musicians playing guitars, banjos, upright bass, fiddles, and mandolins were scattered throughout the campgrounds. Listeners could grab a beer and enjoy the tunes for a while before checking out another group. When we finally decided it was time to crawl up into the pull-out bed in the pop-top, it was close to 2am.

And if you haven’t ever fallen asleep to the sound of bluegrass, horses neighing, and a chilly Wyoming wind howling against your pop-top, you’re missing out. 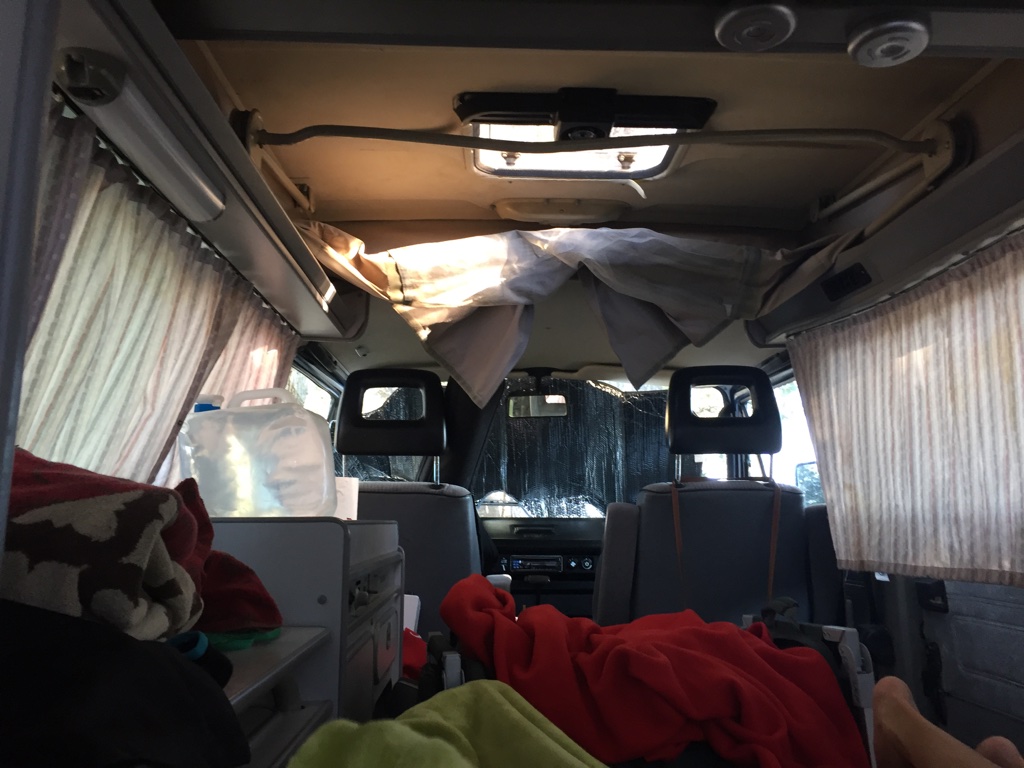 Our home for the next week.