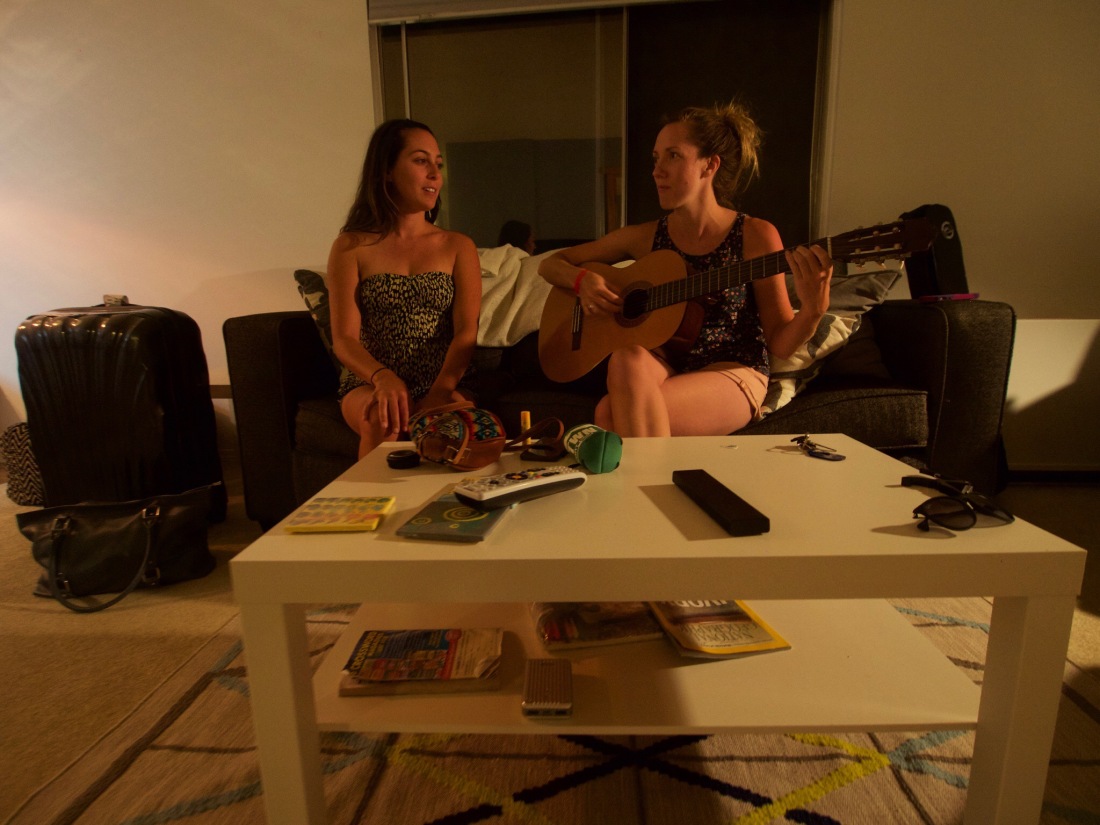 There is something romantic about the notion of going off the grid and immersing yourself in nature. It had only been a few days since we’d left Denver, but it felt like weeks; time slows to a lethargic churn when you’re out in the wilderness. There is also a special joy in getting dirt under your nails and bathing in hot springs and swimming holes. With the right company, I wouldn’t mind this life.

So it was with mixed emotions that we packed up our campsite on Wednesday morning to drive south toward Colorado. We had no real destination for the day, though Laura had selected a random town in southern Wyoming that we’d hoped to reach.

When we reached it without incident, and faster than we’d planned, we both wondered if it wasn’t such a bad idea to get as close to Colorado as possible so we could spend more time in Denver the next day.

An hour later, we pulled into Laramie to grab coffees and some WiFi – and to figure out how long it might take us to get to Fort Collins.

“Fort Collins is about an hour away,” replied the attractive barista. This was exciting for two reasons: 1) We’d be in Colorado and 2) My friends from Manila would be there.

I sent a message to Blair and Holly, though my hopes weren’t too high based on how spontaneous it all was.

“I’m going to be in Fort Collins in an hour,” I wrote. “Want to meet up for dinner or drinks?”

And so, we made it to Fort Collins in an hour and met Blair and Holly at their very cute apartment – after letting Blair explore the Vanagon for a bit. He and his father fix them up, and even though Loretta wasn’t mine, I felt a surge of pride for her every time he complimented something.

A lot had changed in the world since we’d gone off the grid the weekend before. As the four of us sat outside at a restaurant nestled on the perimeter of a pedestrian plaza, we noticed dozens of people trudging along, eyes glued to their iPhones.

Apparently, while we’d been gone, Pokemon Go had taken over the world. Laura and I had been scanning the wilderness for grizzly bears while Poke-fans had been scouring their city for augmented reality Pikachus. It was bizarre. I realized that I’d enjoyed feeling pleasantly disconnected.

Blair and Holly took us to the oldest bar in Fort Collins, Town Pump, where we discussed politics, education, and fly fishing well into the night.

In the morning, they took us to Lucile’s, a hip Cajun-themed breakfast joint that served up cheesy grits (yum! But not as good as Judson’s mom makes them), chicory coffee, and beignets snowballed with powdered sugar. If that’s not fuel to get you to Denver, I don’t know what is.

We rolled into Denver about an hour later. It’s always with strange heaviness that I return from trips, and even though we had a night out in Denver to look forward to, I knew I’d be flying to Kansas City in the morning and couldn’t help but feel a little sad.

The only solution to this – and to returning to civilization from the wild – was to shower and get dolled up. Laura took me to Union Station, where we sipped cocktails at a bar looking dazzling – although everything feels dazzling when compared to unwashed jeans and dirty feet. Ryan arrived and we caught up, regaling him with exciting stories from our trip.

We then had to figure out how to get to my friend Ringo’s apartment, as he and his wife, Jillian, had kindly offered to cook for us while we were in town. This involved us walking to the train station, Laura realizing that the route she’d been studying was not a train route but a bus route, returning to the apartment, getting in Ryan’s truck, and trying to navigate the windy roads of Denver.

Once there, we enjoyed a lovely meal and more good conversation. I don’t remember what we talked about, but I know it involved resurrecting woolly mammoths and the science of tar pits.

We also learned that a Pokemon Go fanatic had walked off a cliff and died in pursuit of a rare Pokemon, and another had to be rescued.

Ryan had to work early in the morning, so we went home. In a fitting end to the night, Laura and I took her dogs for a walk along the river, letting them run off the leash. This worried me a little, as Jillian had told a story about someone getting pulled over and arrested because she was wanted for a “Dog at Large” charge.

Laura sure does love living on the edge.

I packed my things and planned to take the Light Rail to the airport in the morning, sure to leave loads of time between my departure and my flight. I’d learned my lesson.

Other things I learned on this trip:

There’s probably more, but I’m in New Jersey now, and it’s time to enjoy my own state while I have time.