The drive from Sun Valley to Stanley was easy and cool, with morning sunshine and lots of pines. About 30 minutes away, Stanley, Idaho is a small town with a population of about 63 – and all of them seemed to be at the bakery.

And for good reason.

Laura and I ordered breakfast and sat outside on the wooden deck overlooking a dirt road where our van was parked and the dogs reclined in the shady back seat. The food was good, the refills on coffee were endless, and the weather was clear and cold.

The town itself is remarkable in the sense that it seems untouched by technology and development. Overlooked by the snow-peaked Sawtooth Mountains, the town feels snug in all its wood-cabin wonder. I loved it.

Laura walks the dogs, who increased Stanley’s population that day to 65. 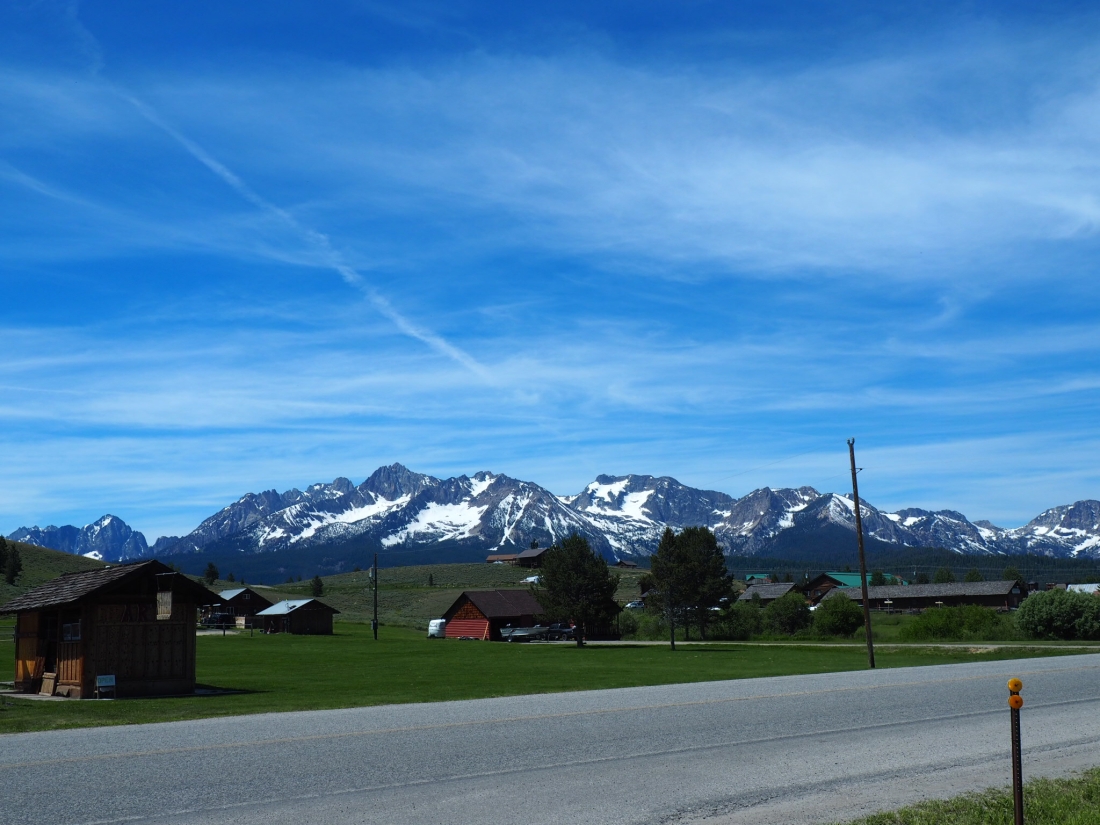 After breakfast, we made our way to McCoys, a fly shop manned by an older gentleman named Steve, who helped us choose flies and procure our Idaho fishing licenses. We optimistically bought a net, and I threw some 100% DEET onto the counter for good measure.

“The rivers here are a little high right now,” Steve told us. “If you want to catch fish, go to the dredge ponds. It’s a guarantee.”

Since we’d been in the store, Steve had received 2-3 phone calls from eager fishers, looking for the best place to go. He’d directed them to Stanley Lake and Arturis Lake, but had kept the dredge ponds from them. We felt we’d been let in on a juicy secret.

Of course, the dredge ponds were fairly impossible to find. The map we’d been given suggested they were just alongside one of the side roads off the river, but as we drove along the route, the ponds were nowhere in sight.

“You’ll turn off just after the road turns from paved to dirt,” Steve had told us. “The ponds will be on your right.”

Convinced we were the victims of a cruel local joke, we turned back around and stopped at a small cafe on the road side and asked the cashier, a young girl who seemed disappointed we weren’t buying food.

“Yeah, you follow the road up to where it turns from paved to dirt,” she told us. “Then there are piles of stones on either side. The dredge ponds are behind the rocks. There’s lots of places to turn off.”

Laura and I exchanged wary glances. Had we not noticed the road changing to dirt?

We hit the road again and drove further, and finally found what we were looking for – seconds after the dredge ponds had been discovered by a family.

“If only we were a few seconds earlier,” Laura mused.

The pond, wide and shady and probably full of fish, had been infiltrated by a family of five, who had brought along inner tubes, chairs, and other necessities for a sunny day at the local dredge pond.

We made our way down a dirt road that threatened to blow a tire until we came to a shady patch of grass where the water rushed over some rocks – a perfect place for fish.

The dogs jumped out and ran freely, Chaska overly excited by the water. Laura and I chose our flies, tied them, and spent the next 20 minutes getting hopelessly tangled in the low-hanging branches. She got a few bites by the rocks, but that was it.

As for me, I lost a good chunk of my leader to a knot. A pair of guys made their way up the road toward us, fly rods in hand.

“Catching anything?” they asked.

“Nothing. Too bad that family took over the pond back there. Where are you coming from?”

“You drove all the way from Denver to…Stanley, just to fish?”

We explained the purpose of our trip, which had begun as a camping trip and turned into a fishing trip almost overnight. It sounds cool and spontaneous, unless you’re fishing in a place where it’s common knowledge that the rivers are high and blown out.

An hour or so had passed, though it’s hard to notice when you’re ankle-deep in a cold pond with the sun beating down on your shoulders. We moved up toward the first pond and waded across to the other side, hoping to catch something on the opposite bank.

“It’s a guarantee to catch fish here,” we repeated every so often, watching our flies drift aimlessly down the stream.

The most exciting thing that happened was Chaska desperately making her way across the stream to where we were standing. She’d been too afraid to cross the water, so she’d searched the banks for a place she could cross on land. We’d commended her for being so smart – then waded back across the river to the van. She’d been too afraid to get back in, so I landed the lucky job of grabbing her by the collar and dragging her across with me.

By this point, it was late afternoon and Laura wasn’t feeling too well. We headed back to Stanley to eat at their other restaurant, a simple bar with a stage for live music. Food, beer, and a glass of Bulleit Rye got Laura back on track, and energized us enough to make the final push out toward Challis National Forest to find a campsite for the evening.

We’d driven past a few promising sites, but upon delving further in, found the paths obscured by fallen trees. Finally, we came upon a site whose entrance was blocked by heavy logs and remnants of fallen trees.

“I hate when people do this,” Laura said, getting out of the van.

“Maybe it’s closed off for a reason,” I suggested.

“No, they don’t close camp sites like this in a national forest,” she told me as I helped her move a log. “Someone is trying to reserve this campsite. Probably for 4th of July weekend.”

I thought this was sneaky and also highly optimistic of these strange people, but it didn’t matter. They wouldn’t get their campsite that night.

We drove in, parked the van in a grassy clearing snuggled on all sides by towering Ponderosa pines, and set up our little table in the grass – and in a buzzing cloud of mosquitos.

That first campsite was sheer, itch-free joy compared to this one. It was like stepping inside a tornado. I bundled myself up while Laura pulled out the peach wine.

“Know the record number of mosquitos killed in one knee slap in Alaska?” she asked. “63.”

Bump Alaska down to the bottom of my list.

We drank peach wine and played cribbage until the sun went down and the mosquitos went with it. Around us, the pine trees jutted up into the night sky, the treetops pointing at constellations that spun above the van. The wind blew. It was blissfully cold and our sleeping bags comfortably warm.

Another win for spontaneous campsites. 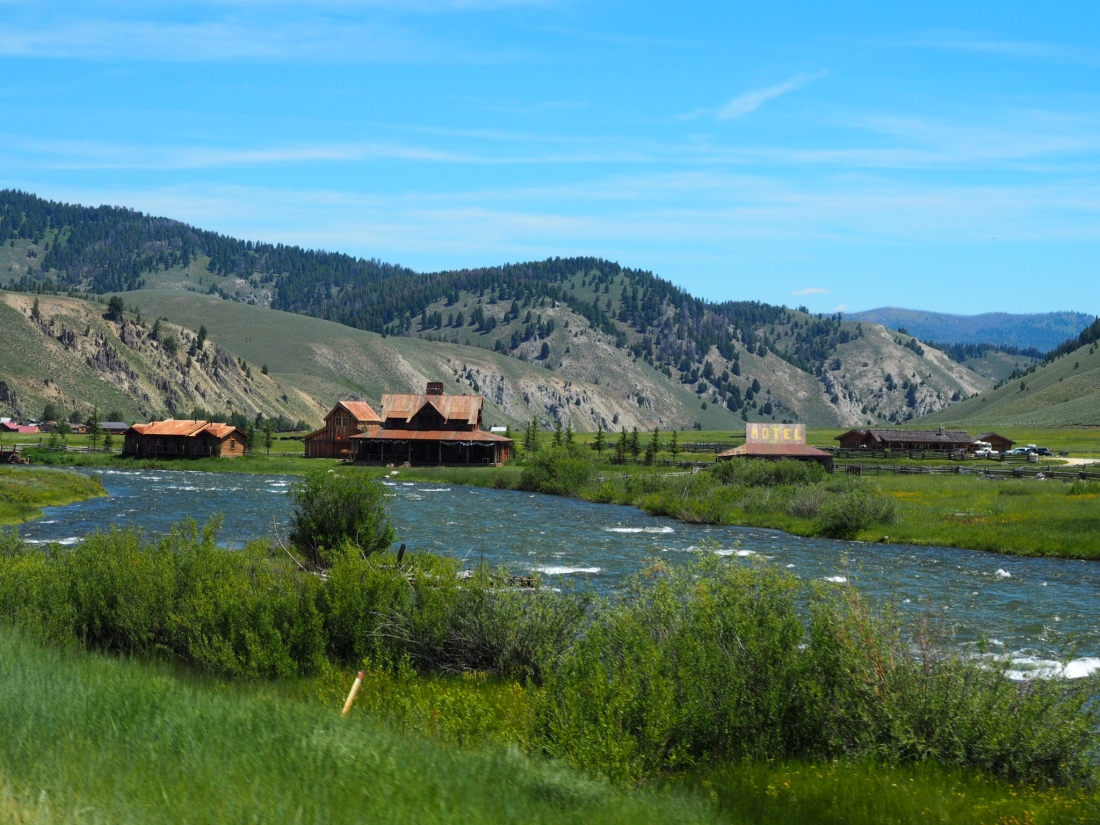 Not a bad place to fish

Laura’s cribbage game is on fire!