Melbourne is a hip city that offers satisfying breakfast around every labyrinthine corner you can’t get your van down. Lucky for us, we were on foot. For $32, we’d scored a parking space in a garage near our flat. On Sunday morning, we rolled our luggage down to the van, packed it up, and left it behind in favor of a tasty brunch at Rustica Cafe.

Tucked down a quaint alley named Druiry, Rustica boasted a brick exterior and a bustling, bright interior where the staff all looked like scruffy rugby players and the flat whites were delightfully frothy. 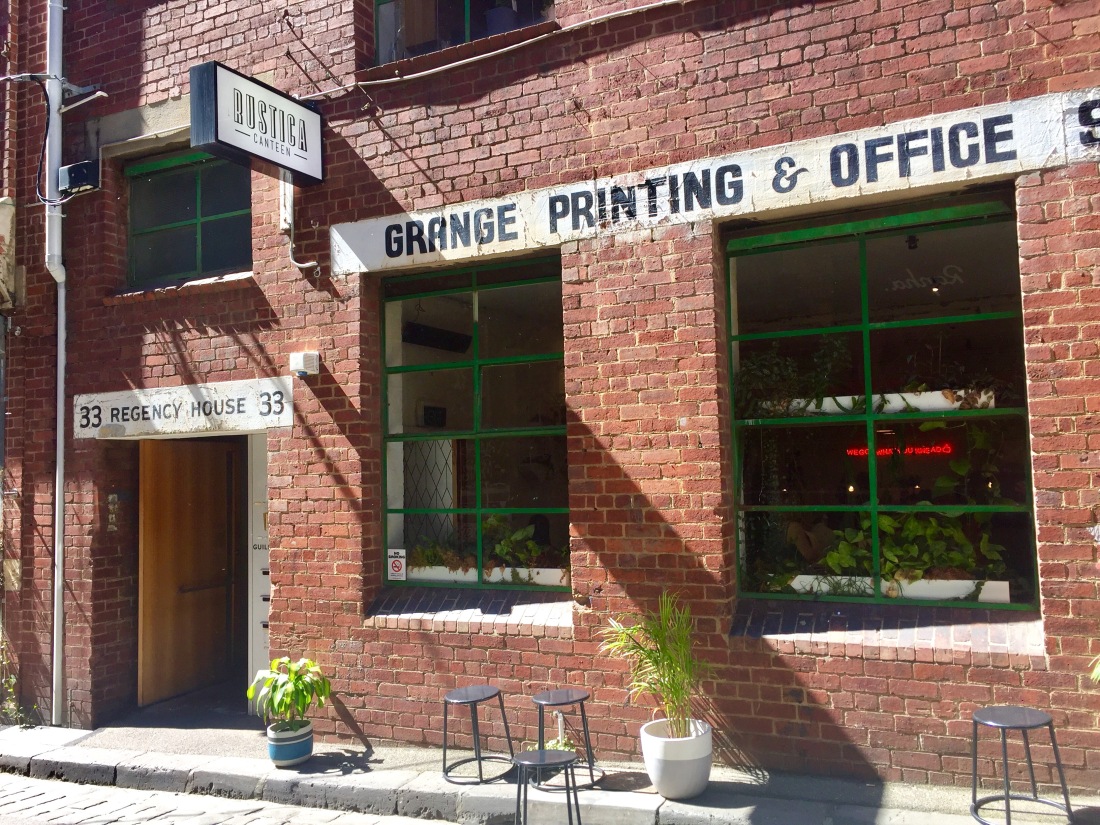 Blair ordered himself a long black, which came with a shot glass full of something clear and bubbly.

“Is it vodka?” asked Carl, hopefully.

“It tastes like club soda,” Alicia remarked after dipping her finger in.

“It’s club soda,” the waiter told us when we gave up and asked him. “Supposed to clear your palate before you drink the coffee or something.”

He shook his head and cleared a plate.

“Pretentious,” he mumbled under his breath.

We fueled up on top notch breakfast – poached eggs, avocado, on pumpkin sourdough for me – and headed back to the van. 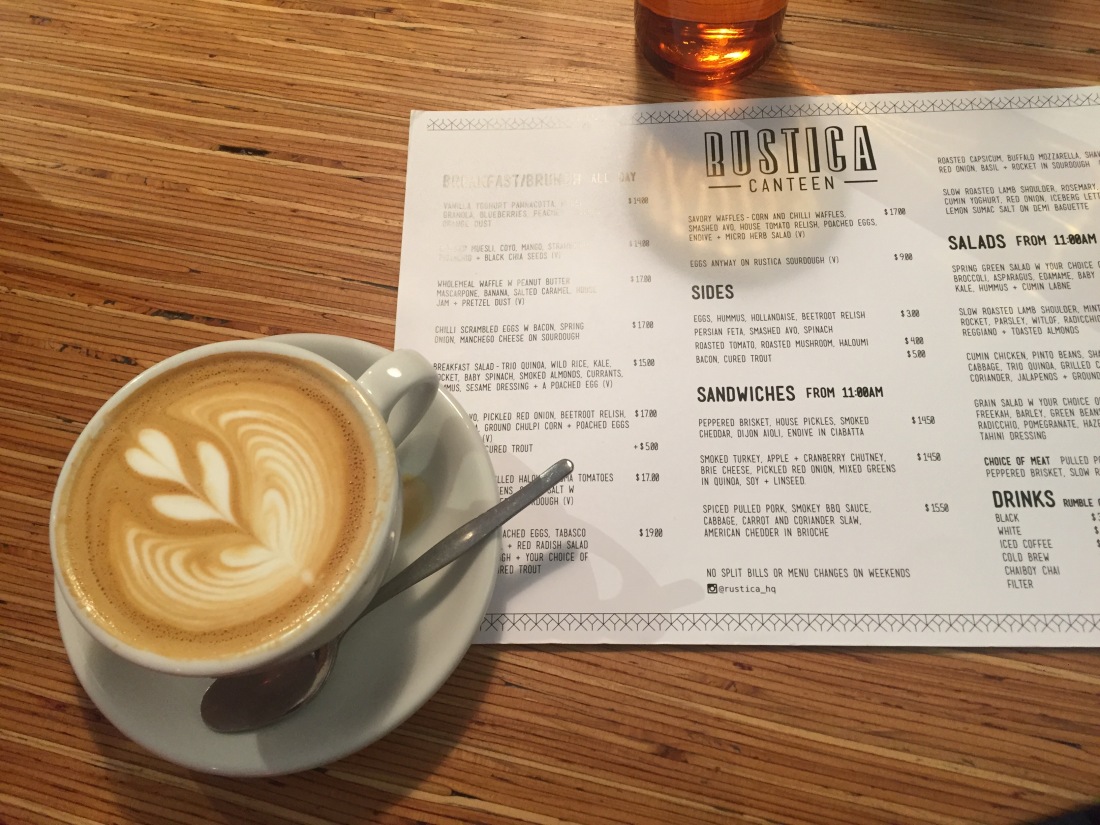 I dreaded steering the monster Imax out of the parking garage, whose exit ramps were slim and designed for hipster hybrid cars, not the soccer team-toting vehicle we had. It took a good 5-10 minutes – and all 6 of us looking out our respective windows to call out how much space there was – to inch the van around the concrete pillar and out of the garage.

White-knuckled, I navigated the narrow streets, often finding myself driving along tram lines. Though we didn’t get on a tram ourselves, Melbourne is a city of them. The crisp blue sky above is sliced with black cables. But hey, if it reduces car exhaust and air pollution, why not?

As you leave Melbourne, the roads become wider and tree-lined. It wasn’t until we hit the M8 that the speed limit increased and the clutter of cars decreased. Soon, we were flying along unimpeded freeways lined with woods on the left and rolling fields and pastures on the right. This was more like it.

Cruising along the freeway, it’s hard to miss the plethora of roadsigns urging tired drivers to take a nap. A drive on New Jersey’s Garden State Parkway comes with signs warning the perils of drunk driving; in Manila, billboards flash the phrase “Honk if you love Jesus. Text and drive if you want to meet him”.

It’s somewhat refreshing to note that Australia’s biggest problem on the road is sleepy drivers. What’s even better is how dedicated Australia is to reducing fatigue-induced fatalities. Our signs along the M8 advertised free coffee at power nap rest stops, but a Google search reveals that there are other stretches of road lined with trivia questions designed to keep you alert. “Keep playing trivia – it may save your life” one sign reads, followed shortly by another that asks, “Floral emblem of Queensland?” A few kilometers later, the answer follows: “The Cooktown Orchid.”

Of course Australia would come up with roadside trivia questions to keep drivers alert. What a brilliant country.

Lucky for me, I had a car full of friends to keep my energy going, and it wasn’t difficult.

“Whoever spots the first kangaroo gets a drink when we get to the Grampians,” Blair called from the back.

Ten minutes later, Alicia and I spotted one.

“Does it count if it’s dead?” we asked. I took my foot off the gas a little. Seeing a kangaroo would be awesome; running one over would not be so awesome.

Our first stop was at a small town called Ballarat. We needed to stock up on food supplies for three nights in a remote cabin. Plus, an hour or so had passed since Rustica and I was in need of coffee.

Carl struggles to close the back door on the mounds of groceries we bought. Not pictured: the wine and beer that went in after.

A small, sleepy town in the middle of nowhere, Ballarat resembles America’s own gold rush towns, only it has continued to flourish rather than crumble after gold was discovered in 1851. Apparently, there was so much gold in Ballarat that miners were digging it up for decades. As we drove in, Alicia read to us about how Ballarat was the site of Australia’s only armed rebellion, where miners revolted against “colonial forces” for unfair taxation.

Historically, Australia’s gold rush was a game-changer not just for ambitious miners, but for Australia itself. It’s one thing to ship your prisoners off to an isolated, barren island thousands of miles away. But it becomes a bit less threatening when you’re sending them off to a veritable gold mine. Finding a massive golden nugget in your front lawn and never having to work again: how’s that for punishment?

After filling up the van with groceries and alcohol, we headed down a quiet main street to an espresso bar where we waited for our coffees. The tables were covered in local newspapers, so I grabbed one and had a seat at a banquet at the window looking out over the town, bathed in the gold of the afternoon sun.

A local newspaper can tell you a lot about a place, so I was surprised to find that the front page story featured two young girls and their search for a missing puppy. The second story on the front page was on the same topic, but focused more on recent developments in the search itself.

A few pages in, there was some talk of Trump aides being indicted with charges concerning Russia, but it was barely noticeable in the shadow of a full-page spread on “thunderstorm asthma.”

This was new, but not alarming. As Bill Bryson wisely writes, Australia is a place that is constantly thinking up new ways to kill you. I knew about the box jellyfish, the sharks, the crabs, the fact that Australia is home to more venomous snakes than nonvenomous. But this certainly was news.

“Thunderstorm asthma”, I noted, struck its victims after – you guessed it – a thunderstorm. While people who are prone to asthma are more likely to be affected, I gathered that no one is really safe. I thought with a pang of my expired albuterol inhaler tucked away in my toiletries bag.

Back on the road, we passed the time alternating between Alicia reading out interesting facts from Bryson’s book and imagining historical events that might have inspired the names of various bridges, creeks, and rivers.

“Billy Billy Creek,” I read as we crossed a small bridge. “Blair, what happened there? Who’s Billy Billy?”

“Well, he was a miner. A poor miner who discovered gold one day but got taxed too heavily for it.”

“You should write a song,” Holly suggested. “The Ballad of Billy Billy.”

We laughed, but as I write this, Carl has already penned a verse and some chords. Truly inspiring.

As we turned off the major roads and down dirt and gravel, we kept our eyes peeled for kangaroos. Occasionally, one or two would bound slowly across the road, and then we would continue on, the van barreling through holes and unpaved mounds of gravel.

In addition to kangaroos, there were lots of cows. Alicia played and won a riveting round of “Hey cow!” as we ambled out of the woods and toward “town”. “Town” consisted of what looked like an old storage shed off to the left with a large sign that read “Barney’s Bar and Bistro”. Then, we turned off down another paved road that brought us through a few parks, a cricket oval, past a visitor’s center with a grocery store and gas station, and then back out again towards the woods.

We turned right onto Wattle Tree Road, a steep gravel incline that led us to Scott Street where we found our cabin. I say “cabin”, but the place was really quite extravagant. A woodburning stove featured in the living room, which opened up into a dining area with a spacious kitchen. Down the hall were three bedrooms, a bathroom, and a shower, and another bed and bath were situated upstairs in an open loft. It was gorgeous and cold.

Blair and Carl chopped firewood while the rest of us opened beers and made tacos. Almost immediately, four cockatoos landed on our deck railing, waddling about and peering into the sliding glass doors. 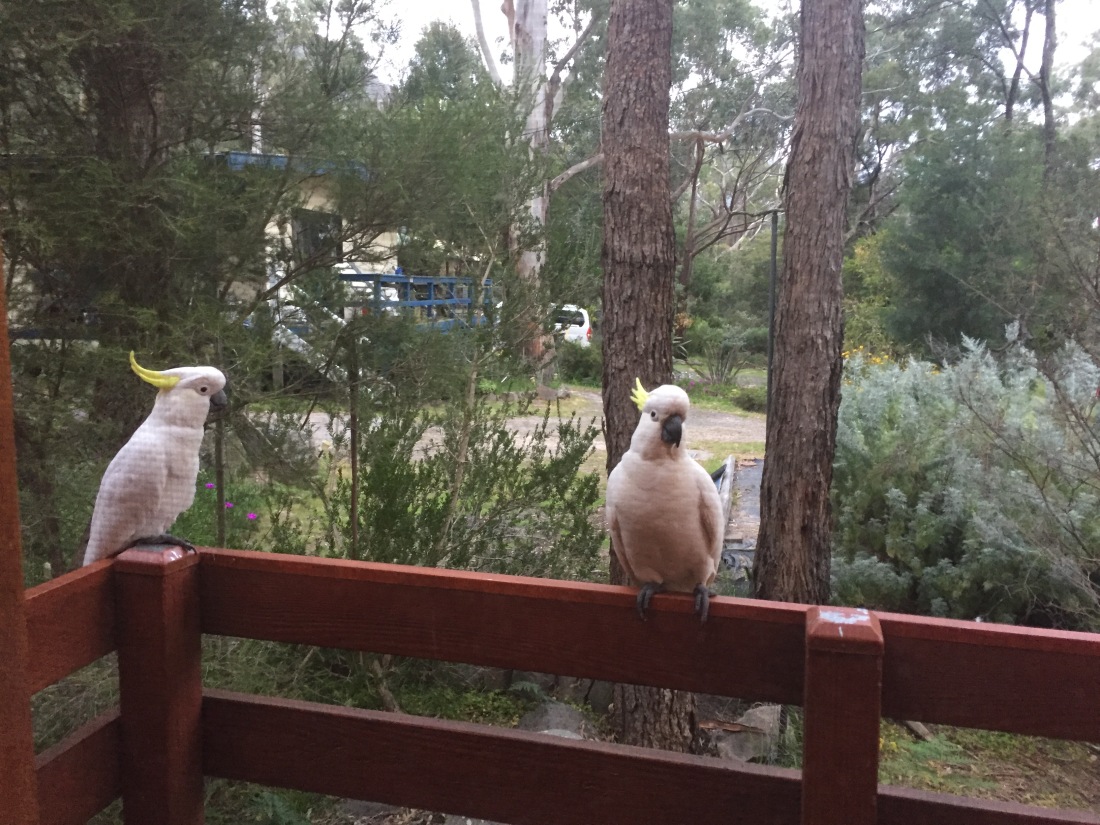 It felt almost ominous, but later I discovered that cockatoos and other species of parrot are indigenous to Australia. This did not get old. Imagine walking down a wooded path and finding your way temporarily obscured by 6 or 7 brightly-plumaged parrots swooping down to land on a tree nearby. All that earthy brown and green suddenly splashed with vivid red and blue. It was stunning.

It was early evening when we arrived, so we explored our cabin rather than the world outside. That night, I fell asleep to the smell of wood smoke and the cozy heat emanating from my electric blanket.

I couldn’t wait to get outside and see what other surprises the Grampians had in store.