One thing I’d been told about Australia is that the weather is unpredictable, specifically in Melbourne. This is also true of the Grampians.

Monday morning greeted us with grey skies and rain – the perfect weather for a long breakfast with lots of coffee. After feasting on eggs, avocado, and buttered toast, we made the most of the rainy morning by filming scenes for our movie. When the weather cleared a bit and patches of blue sky were visible, we took the van into “town” to see about a short hike.

Of course, we were also keen to spot some kangaroos. The previous afternoon, Blair and Carl had taken the pedestrian path into town and passed scores of them along the way. This sounded wonderful. 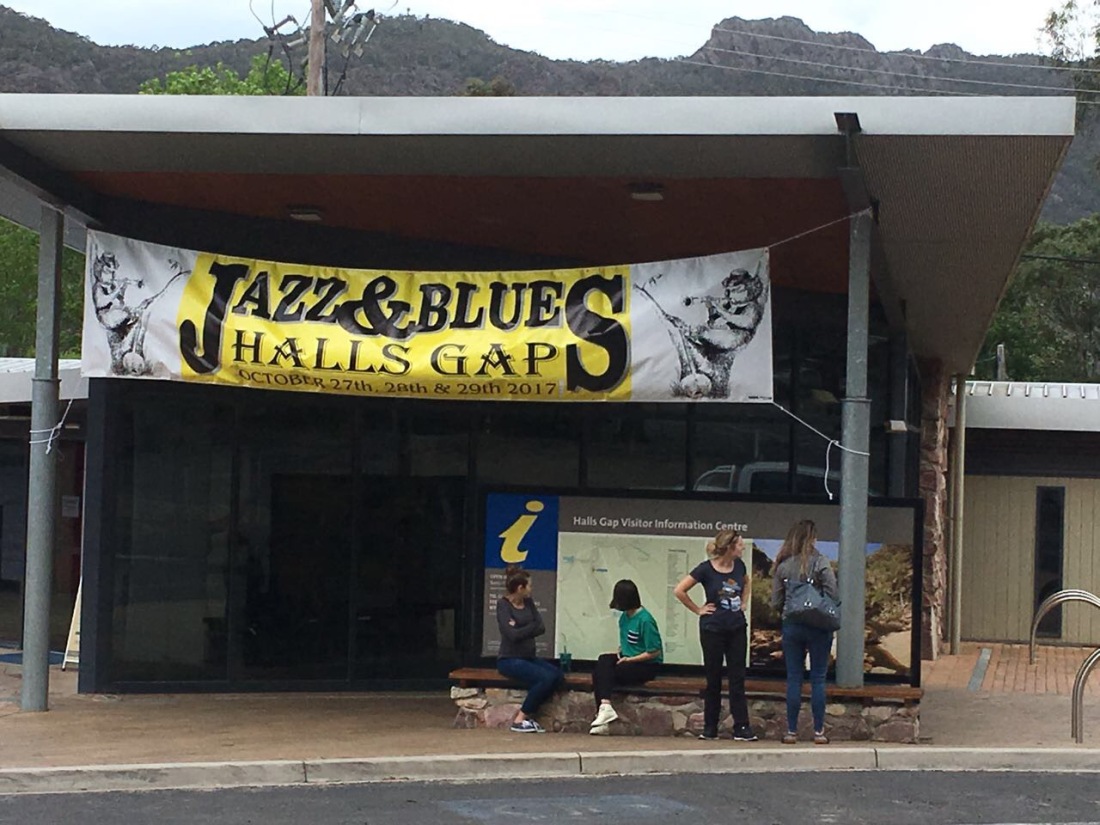 We missed the Jazz and Blues festival by a few hours.

The Halls Gap visitor center is a small building with heat and lots of maps of nearby hiking trails. As we contemplated a short waterfall hike nearby, a middle-aged woman appeared behind the desk.

“Is this a feasible hike to do now?” we asked, pointing to the short waterfall trail.

“Yes, you could do this now. But this other one,” she began, pointing at another trail nearby. “That one is closed right now. I have to tell you that. And keep an eye on the weather. There’s a 0% chance of rain tomorrow, but today it’s high. Just watch the skies.”

“And we can see kangaroos around here?” Alicia asked.

At this, the woman regarded us skeptically, as if we’d asked her whether Australia was home to a secret dinosaur population.

This we had not known. We’d nearly run a few over the afternoon before, and Blair and Carl had walked the pedestrian path around 4:30. Perhaps “nocturnal” is a broader concept in Australia.

After selecting a hiking trail, Holly drew the woman’s attention to a large banner beside the info desk advertising ghost tours of a lunatic asylum in nearby Aradale.

“How can we sign up for one of those?” Holly asked. At this, the woman softened, as if lunatic asylums were a more comfortable topic than kangaroos.

“Ah, those tours only operate on weekends and Wednesday mornings,” she informed us. This seemed an on variety of opening hours, but I wasn’t especially excited about touring a lunatic asylum, so I didn’t mind.

“I’ve been in there,” she went on with a nostalgic smile, before quickly adding, “Not as a patient, but I’ve been on tours.”

We hastily thanked her and exited with our trail maps. The waterfall trailhead was just up by the cricket oval, so we drove the van over and squeezed it into a tiny space beside another van. The sky was blue, the air was crisp and fresh, my nose was running a little, and life was good.

The six of us started up the trail, which was wooded with a pleasantly slight incline. It was only a short kilometer or two to the waterfall, and we kept our eyes peeled for kangaroos.

Suddenly, the wind picked up and the sky darkened. In moments, icy drops of rain began falling through the tree canopy overhead. Thinking we were fairly close, we soldiered on, until the rain fell harder and colder. Carl and I had all of our camera equipment, and Holly and I had both forgotten raincoats. (Hers was in the van. Mine was in Manila.) 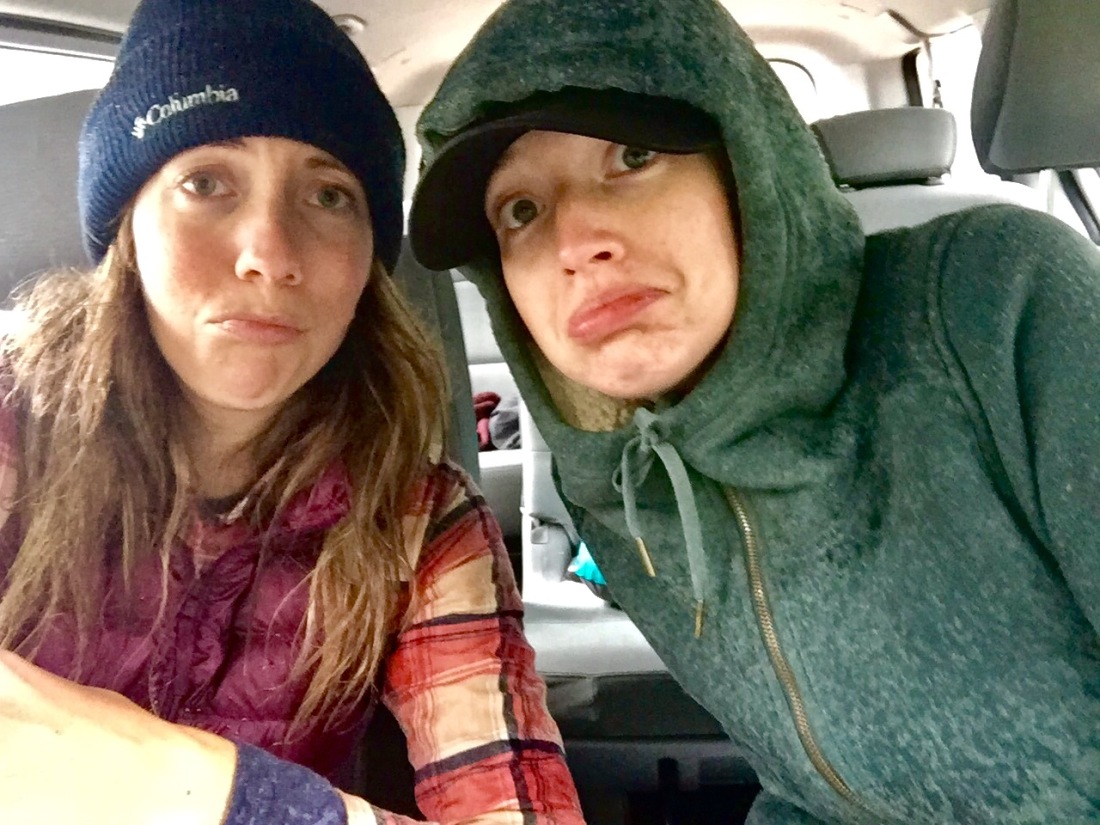 Preferring to be dry, Holly and I took the camera equipment from Carl and headed back down toward the van through a driving rain that soaked through my woolen hat and hiking pants. Once in the van, I cranked the heat and popped a caramel apple Wurther’s.

“Let’s go to the bathroom and get supplies from the general store,” Holly said.

“Do you think they’ll finish the hike before we get back?” I asked.

“We’ve just come a long way back. I’m sure we have time.”

I agreed, so we drove down to the toilets and then to the gas station, where we searched for butter and coffee and I bought a cold bottle of Bundaberg. Back outside in the rain, we headed for the van, passing a guy in shorts and a wet hoodie.

“Where are you two off to?” he asked us.

“Going to pick up some hikers,” Holly told him. Glancing back to where he’d come from, we spotted a parked car and a tent billowing in the wind.

“Do you think he lives there?” I asked.

We drove back to the hiking trail where our friends were huddled beneath an awning. They clambered gratefully in.

“How was the waterfall?” we asked.

Alicia found us a photo in her phone: the four of them huddled together in front of a large rock, a trickle of water carving a vertical path down its front.

“Not what we were expecting,” she said.

Just looking at this picture makes me feel relaxed.

We drove back to the cabin through the rain and passed the afternoon drying our clothes in a functioning dryer and listening to logs crack in the fire. At around 4:30, the skies cleared, so we headed back into town to see the kangaroos.

They weren’t hard to find. Scores of them gathered on a stretch of lawn outside a trailer park, grazing and hopping and boxing with each other. We stared at them for ages, gaining the confidence to approach them and then hurriedly backing up when they met our eyes.

Hoping to find some kangaroos in a location that did not offer a background of caravans, we headed into some nearby botanical gardens. The walk took us down a dirt path and over a river, then into some woods. There wasn’t much to see apart from a small garden of stumps and ceramic mushrooms.

“Do you think we can jump on these?” I asked.

“It’s Australia,” Alicia replied knowingly. “You can do whatever you want here.”

Halfway through a jump, the sky darkened and dumped rain on us. We scampered back to a trail map with an awning and waited out the rain. When it was finished, the sky seemed to clear for good, with nothing but blue overhead. Blair and Holly headed back to the cabin, but Alicia, Rosie, and I decided to explore the pedestrian path and the town a bit more. 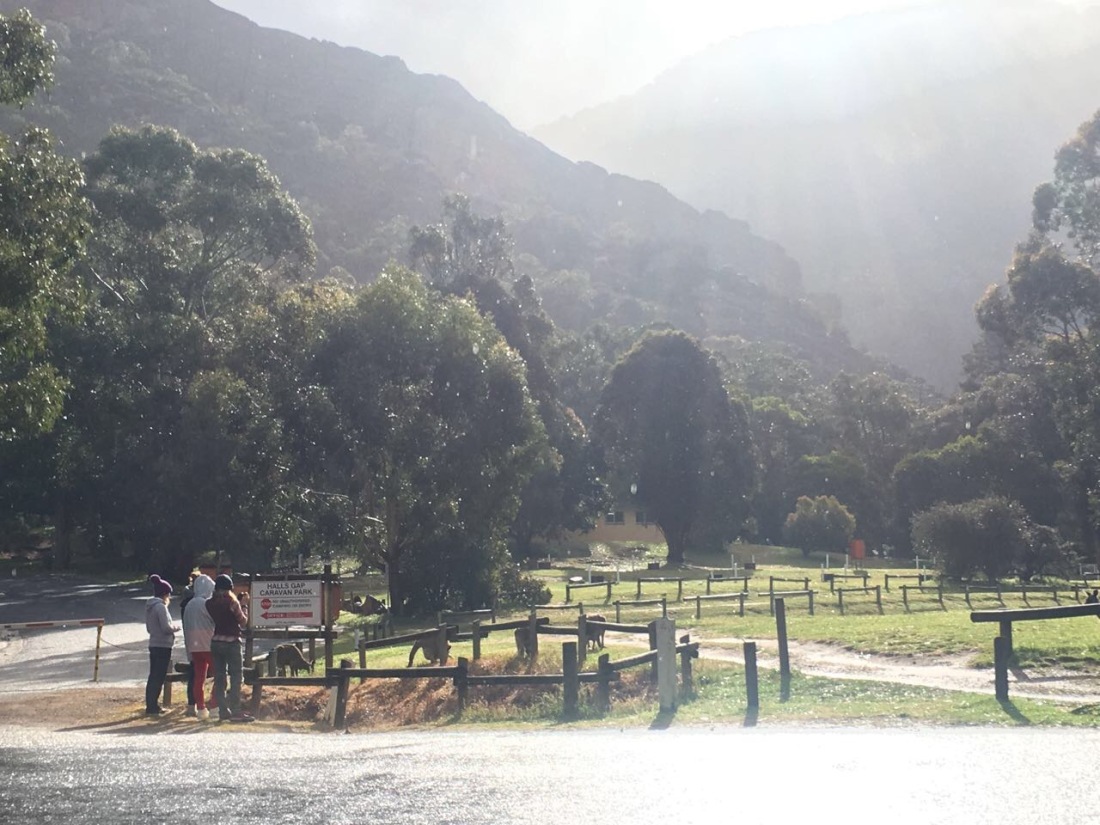 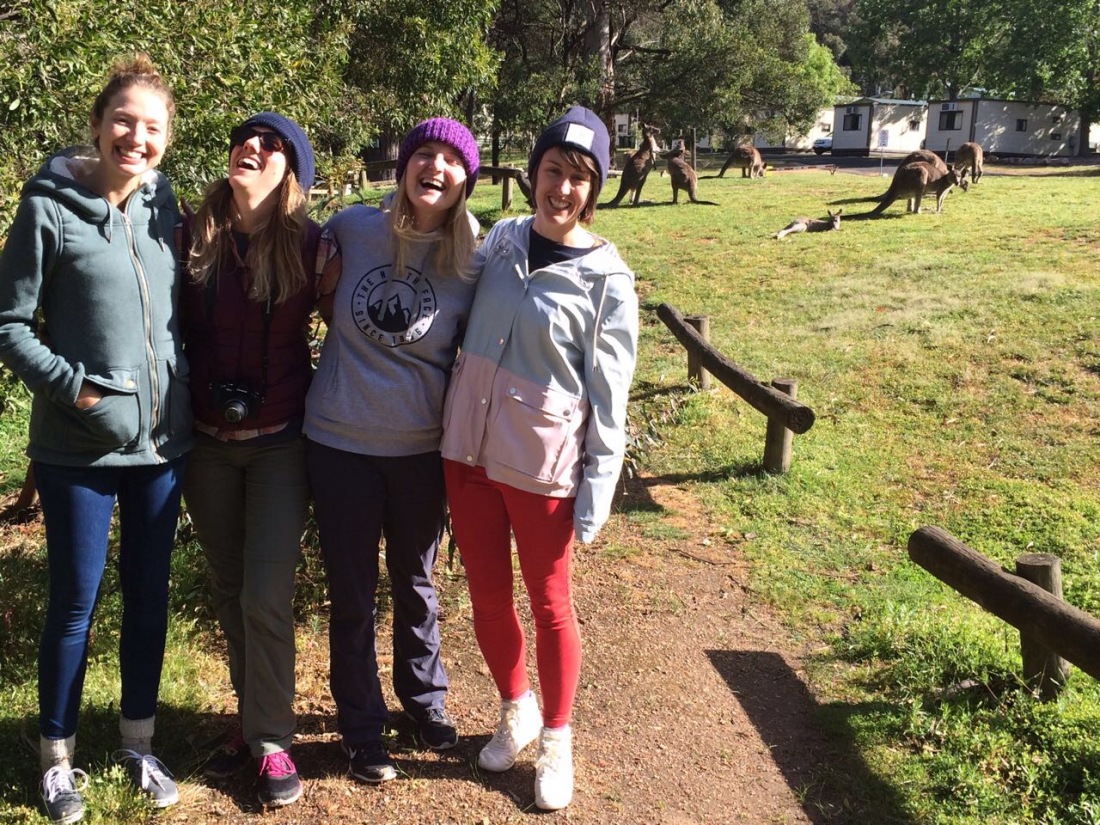 I’d brought one of the longboards with me, so I took off down the path on that.

Picture this: a clear late afternoon sky over rain-slick roads, small clusters of wooden shops and cafes, a gurgling river, a crisp breeze, the occasional bouncing kangaroo, and nothing in front of you but gently sloping, unpeopled pavement. A sudden, impossibly bright rainbow overhead.

It was one of those moments you want to pocket for later, when you’re back in a cramped, hot, crowded city. Even my runny nose was welcome.

The pedestrian trail was perfect for longboarding, with slight hills that flattened out at the end. I was enjoying one when suddenly Carl rounded the corner on the other longboard. We went back and forth along the pedestrian path until Alicia and Rosie met up with us.

“Bush life, ladies!” they called out to us.

Carl made his way over to chat with them.

“They’re stranded here,” he told us. “Their car broke down and they’re stuck here until the part they ordered comes in. They’ve been here for 3 days.”

We kicked around the idea of inviting them back to our cabin to sleep in beds, but figured we should check with Blair and Holly first.

We longboarded back to the van, loaded it up, and headed back. We didn’t invite them back in the end, but the next day, we passed the gas station and saw that they had left town.

But it’s the thought that counts, right?

Halls Gap post-rain. So many roads to longboard down. 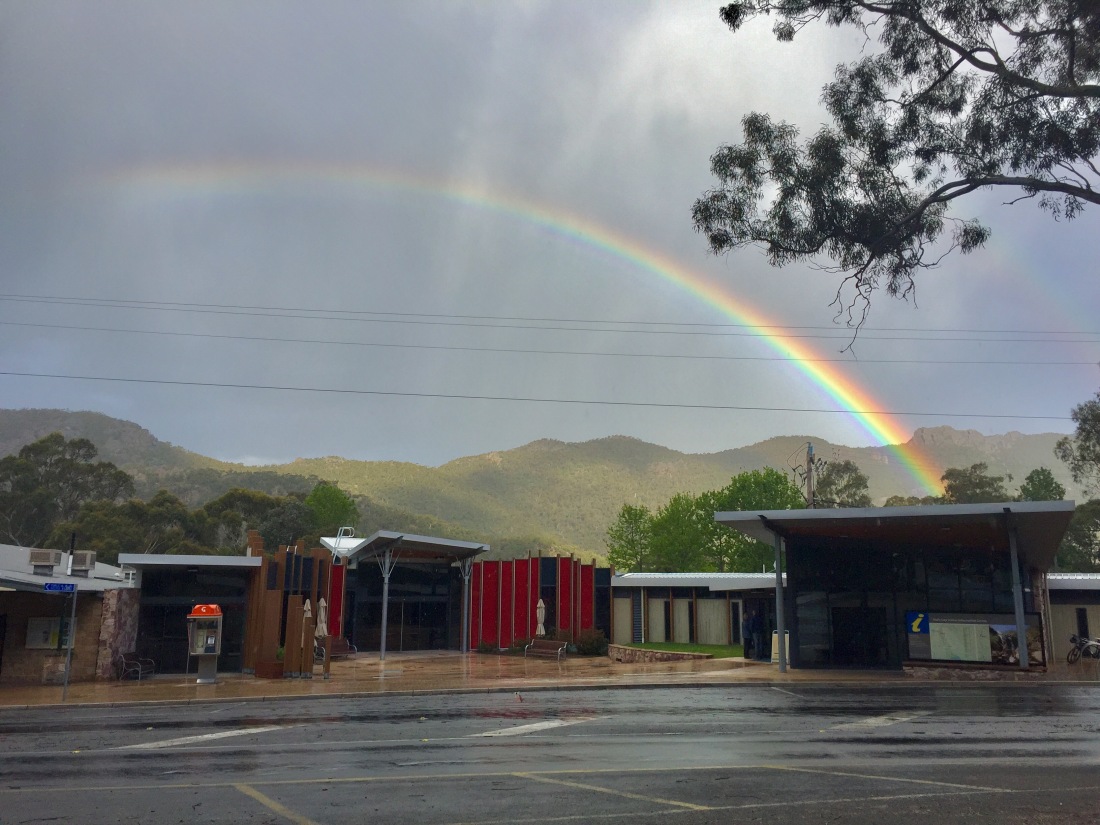 Perfect end to an awesome day.