On Monday morning, I woke up a little early and headed to McDonalds for a latte. KR – and Bruce – said that there was a river near the BnB where the cherry blossoms were especially stunning, and I wanted to see it.

Coffee in hand and snug in a warm fleece, I crossed the street at McDonalds and found myself in a new world. The overpass, the high-rises, the flashing billboards – all were replaced by block after block of sakura, or cherry blossoms.

Standing at the first pedestrian bridge, I thought about how lucky we were to see sakura on our trip. When I’d last checked the predictions online, the blooms were anticipated around Easter Sunday, the very end of our trip. But a day before we flew in, Bruce had sent Alicia a photo of the river, the blossoms all in bloom.

By the end of our trip, as we wheeled our suitcases back to the airport, most of the trees were already blossom-less. It’s a quick, fleeting beauty, a reminder of life, I suppose.

I strolled along the river and loitered on the small bridges. Every new bridge granted a new view of different blossoms, different branches, different angles and shades of pink and white. There were plenty of other folks milling about, but it was quiet and somehow didn’t feel crowded. 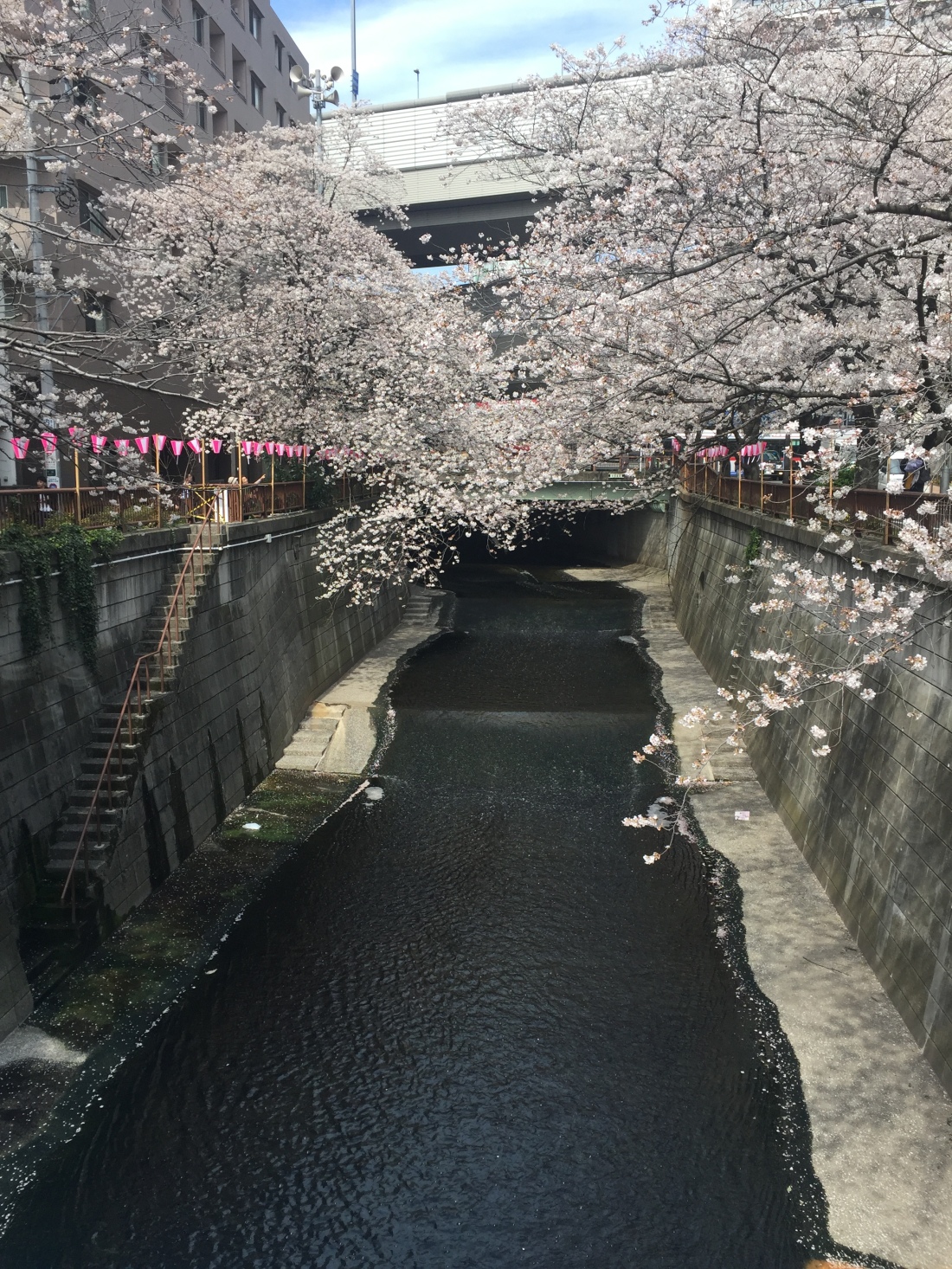 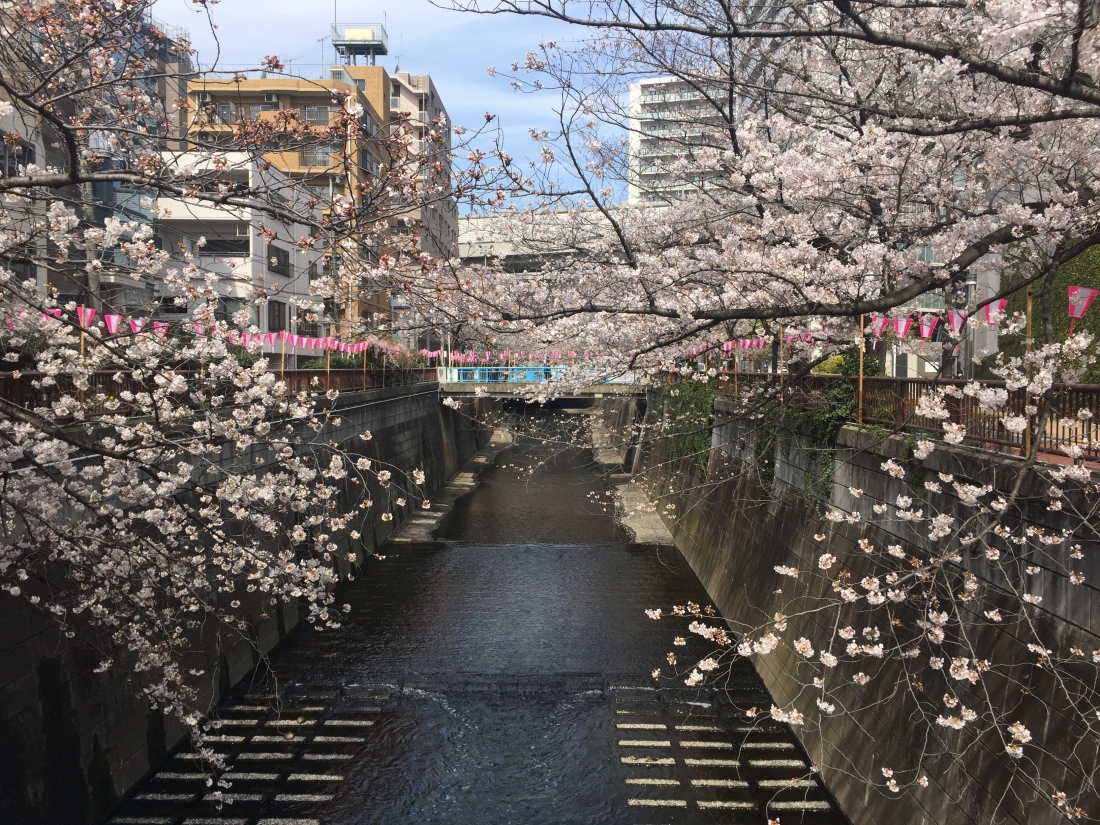 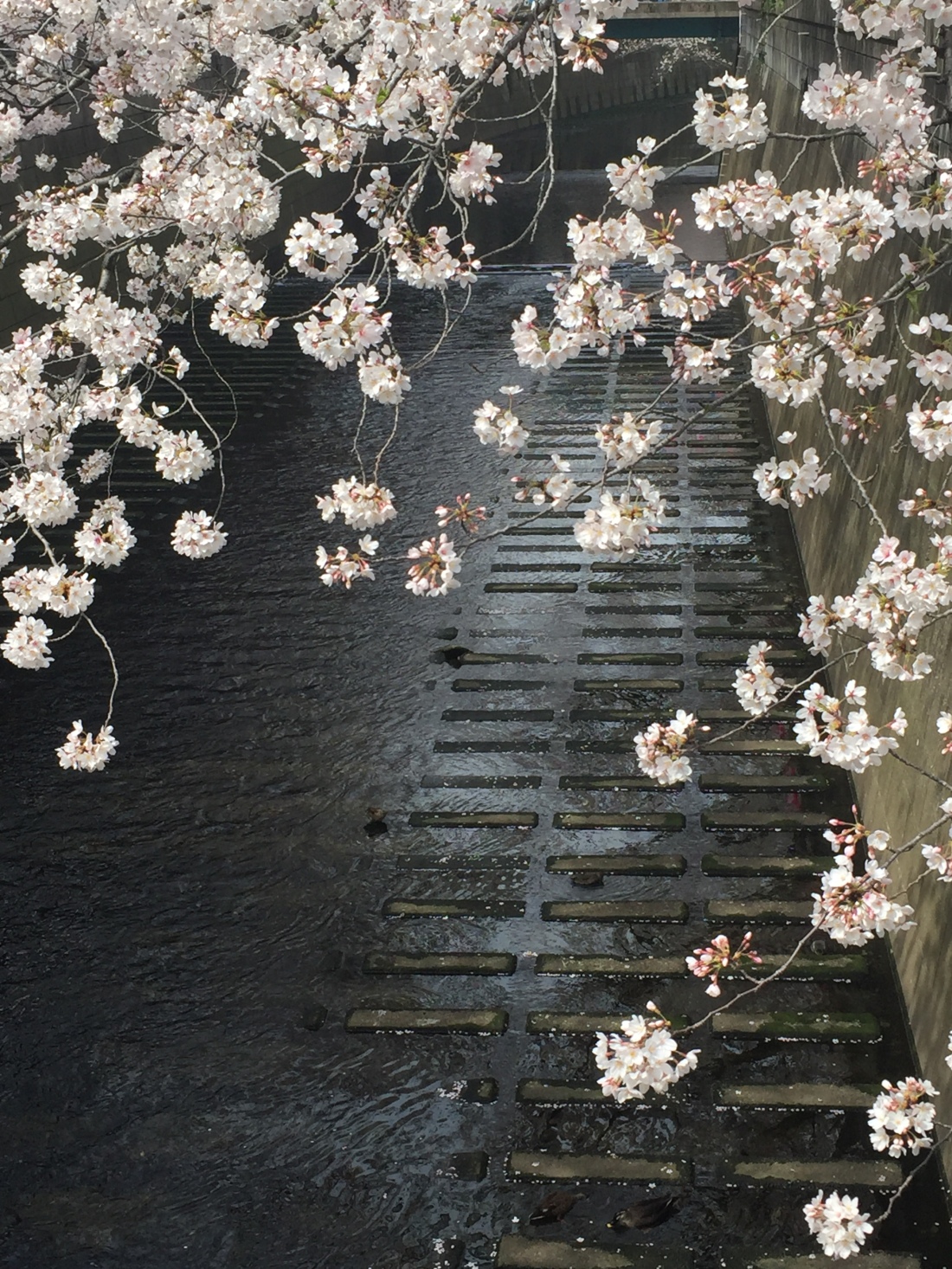 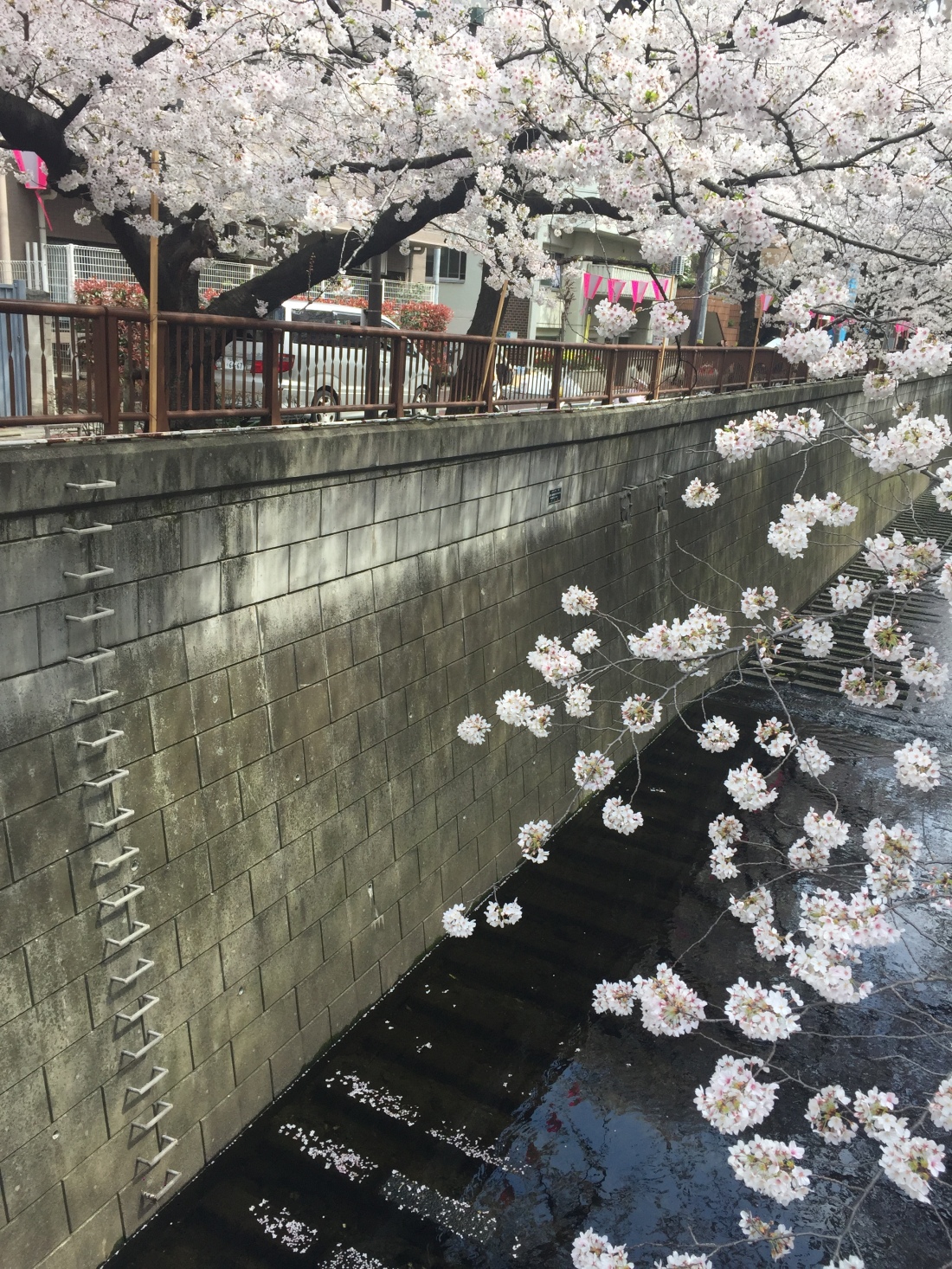 By the time I got back to the Air BnB, my coffee was empty and my cheeks were pink from the chill. As I removed my shoes at the door, Carl looked up and said the only words that could have made the morning more perfect.

“I found a breakfast place.”

Be still my heart!

Before you interject, before you judge me for craving poached eggs in Japan, let me stop you and say that while traveling, I will try almost anything. For lunch, snacks, dinner. But breakfast is sacred. Noodles for breakfast are not acceptable. The perfect holiday, the perfect weekend, begins with lazy breakfasts, long conversations over coffee refills.

Carl did good. He led us back toward the river to a breakfast joint called The Breakfast Club, which felt like a leap back in time: swivel stools at a laminate counter, records packed into wooden shelves, faded wallpaper, diner-style tables and chairs. Coffee in mismatched mugs. Drool-worthy avocado toast with poached eggs and the reddest, freshest tomatoes ever. 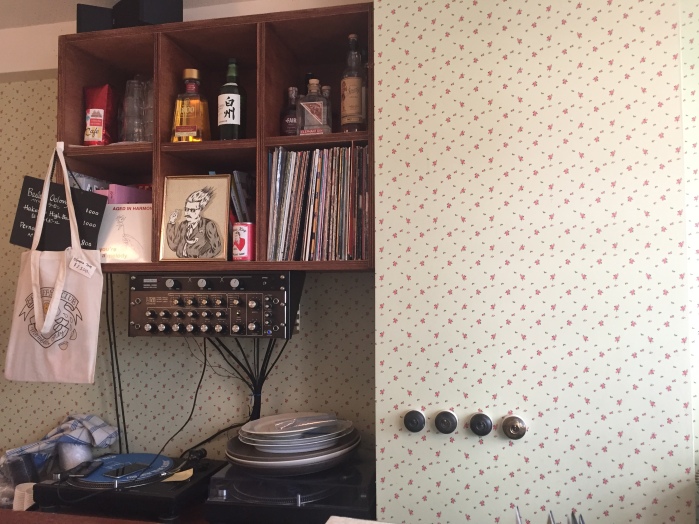 Afterwards, we headed back to the Air BnB and slowly made our way to the JR East station to catch the shinkansen (bullet train) to Yuzawa for snowboarding. Alicia’s awesome research skills came in handy here; she found that, with a JR Tokyo Wide Pass, you get a shinkansen ticket that lasts 3 days, plus discounts on lift tickets and rentals at Gala Yuzawa.

The trickiest part was buying the tickets. At the JR office, we were directed out to a different office, where we waited in line until a woman asked where we were going.

“Oh…” she said, with an expression that clearly said there are no spaces left on the train. “Um, wait and see. We will see.”

“We bite the cost of the hotel, get a train tomorrow, and go to the bar,” said Carl.

Luckily, that wasn’t the case. She’d been worried because the lifts at Gala closed at 5, and we were in line at 3pm.

With the help of Carl and KR splitting up to explore the subway station and find where we were meant to go, we eventually got the subway to Omiya, where we caught the speedy shinkansen an hour north to Yuzawa.

“This is about the same distance from DC to New York,” Alicia said later. “We covered it in one hour.”

Stepping out of the train station, you could feel the difference. The air was a bit colder, the Japanese Alps stood snow-capped around the small, ski town. A shuttle ride and a bag of Gudetama chips later, we arrived at Yuzawa New Otani, our small but cozy hotel.

The traditional Japanese rooms boasted matcha green tatami mats that you could traverse shoeless, little seats, a tea set with tea and hot water, and a set of robes you could wear to onsen.

Each time we left the hotel at night, we’d return to find beds on the floor, little comfy futons all made up for us.

The first night, we ventured down the street to the best sushi bar ever, where we met some locals and brushed up on our Japanese with the chefs. And ate gut-loads of sushi. There was a chef’s special, where the chef chose the best catches of the day and made 10 pieces, and we may have ordered more than one.

After, we found ourselves in a dive bar playing pool and darts with a guy who worked at Gala Yuzawa. Which reminded me how badly I wanted to snowboard, so I left the dive bar and went to bed. 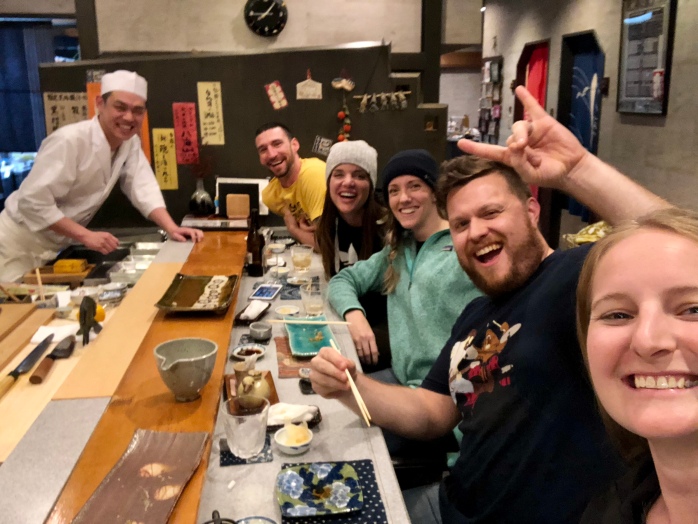 In the morning, I caught the second shuttle from our hotel to Gala Yuzawa at 8:30am. As I waited at the rental counter, I noticed that there were two options for rental gear: standard or expert. I’m no expert, but the price difference wasn’t too astronomical, and the standard boards I saw them pull out looked rough and chipped around the edges.

I felt pretentious renting expert, but I opted for it anyway. Expert rentals were at the top of the gondola, and the entire ride up I kept trying to justify my choice. I thought about my friends who had done a day at a race track and how they would’ve paid for a really nice car rather than some junk heap. I thought how I would love to pay extra for a Taylor guitar.

In the end, no justification was necessary. It is the best board I have ever ridden. (This doesn’t say much. I’ve probably only ridden 3 or 4, but still.) I knew it immediately. Every single run was better than the last. I coasted over lumps. I flew – flew! – across the flat pieces of a green and up hills. Better yet, I was totally in control the entire time. The board was fast, carved beautifully, and didn’t catch edges. In the entire day, I fell once, at the bottom of a run while doing a little spin. 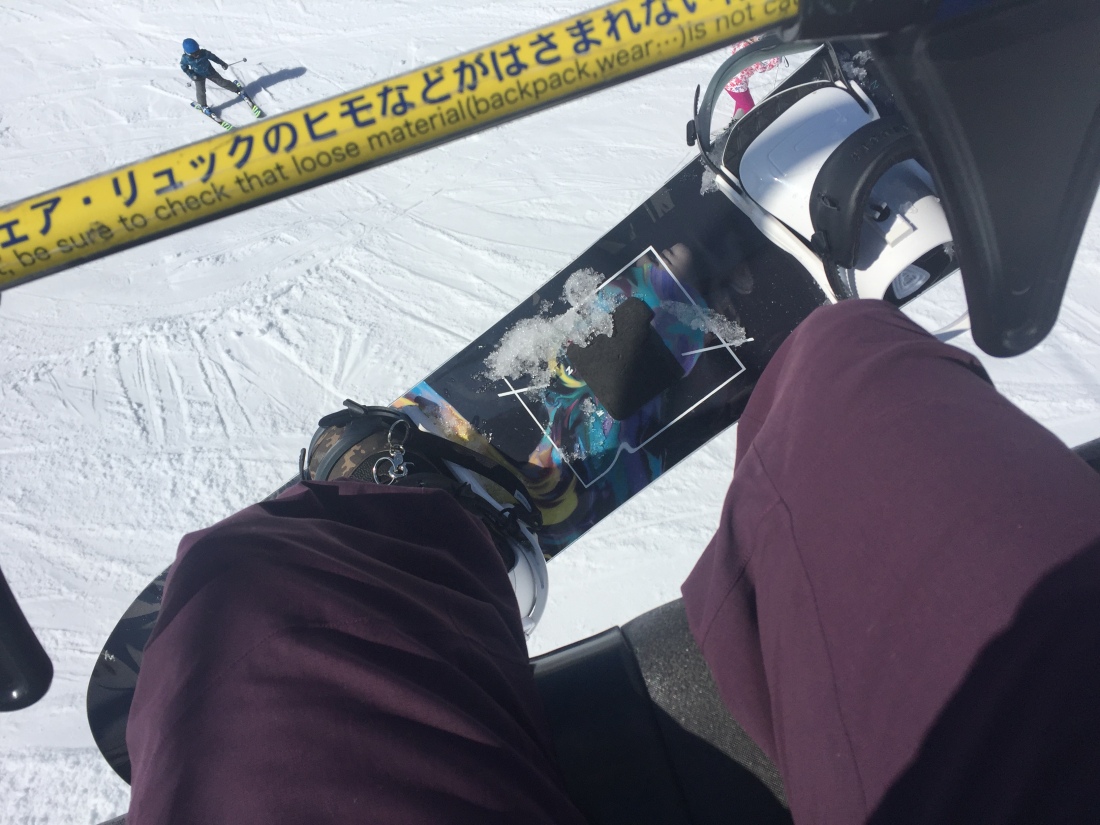 My friends were meeting me at the rental hall and cafes at 11, and for some reason, there was only one run back down that way, unless you wanted to take the gondola down. To access the run, I had to first walk through a long, dark tunnel with lots of steps. It was a sweaty climb upward with the end seeming to get farther and farther away. When I finally emerged, I found myself on a lonely outcrop on the side of the mountain with a big sign that read “Downhill Course Falcon – 2.5km”.

It felt weird, because no one else had been in the tunnel or walking toward it, and no one was here on the other side, but I had asked and if the trail was closed, surely they would’ve told me, right? Right? (It was warm and there were patches of grass all around the mountain, so I wasn’t sure if I’d suddenly be boarding on mud or something.)

It was AWESOME. Twists, turns, speedy downhills you have to take at full speed because they suddenly veer uphill. I haven’t gone that fast before. (I have the Fear. And I don’t mind, because a broken bone is so not worth it.)

It was exhilarating. I met up with the others and chugged Pocari Sweat. We boarded until 1:30, ate lunch, and continued with a few other runs.

I didn’t realize how hungry or tired I was until we got back to the hotel, where I had a wonderful shower and then we headed out to the train station to get ramen. It was amazing. All I’d had all day were 2 Pocari Sweats, 2 waters, a bowl of Miso soup and a Snickers bar. The giant bowl of noodles, egg, and vegetables hit the spot.

And to top it all off, I snagged an hour in the private onsen, which is basically the best bath tub ever and the best end to a day on the mountain.