Fun Times in Split with Allison, Kacey, and Rain.

Arriving in the bustling city of Split after relaxing in small Zadar was a slap in the face. Unlike Zadar’s laid-back ambiance, Split’s squeaky, cobblestone streets were choked with tourists and souvenir stands.

We parked the car in a public lot on the harbor, determined not to accumulate more parking tickets on this trip than necessary. Once parked, we walked sans luggage to our AirBnB.

Located in the labyrinthine streets of Old Town, we were uncertain how to find it and didn’t need heavy luggage in tow while we tried to. Walking along the promenade, I felt as if I was in LA, with roller bladers and cyclists and kiosks crowding the space along the harbor.

Then there were the tour operators.

“Excuse me, you like party? You want to party tonight?”

“Sunset pirate cruise, cheap. Hello. Where you from?” 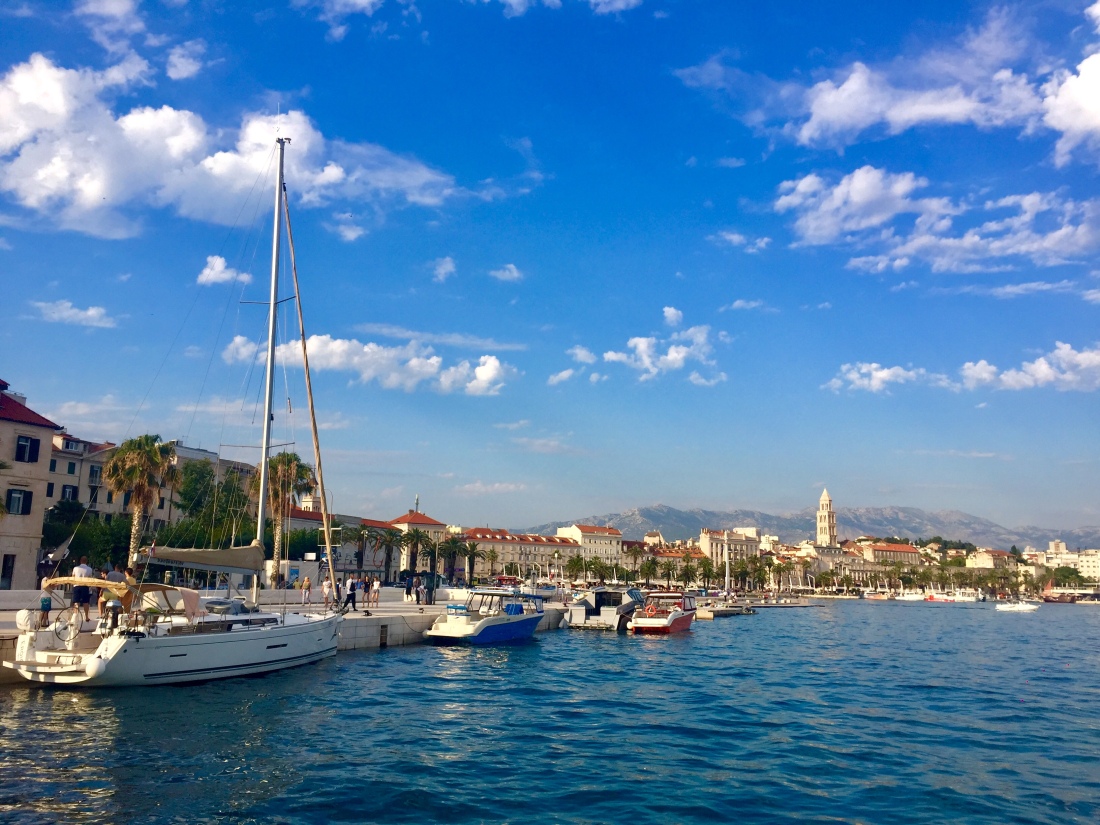 The harbor in Split is gorgeous.

We soldiered on, off the promenade and into the winding back streets. Kacey did an excellent job of navigating us toward our AirBnB, located beside Diocletian’s Palace. Once we arrived on the street outside, Kacey rang the host who said his mother would come and meet us.

When she did, she unlocked a small door and led us up a steep, narrow staircase to a cramped living room area with a couch, a small kitchenette, and a table beside a window overlooking the little side street below. There was a bathroom, and then another ascent up to an attic loft with low ceilings and a mattress on the floor.

Still, it was quaint in its own way, with charming arches made of stone and shuttered windows with views of an oil bar downstairs, voices of diners drifting in at night.

“Everything is little in this apartment,” Kacey remarked at one point.

“Even the towels,” I added after a shower where I pulled the towel off my couch-bed to find that it was only slightly larger than a postage stamp and hilariously did not wrap around my torso.

After getting the key, we went back for our suitcases, somehow getting hopelessly lost on the way. By the time we managed to get them up the stairs – Kacey’s was so plump she had to turn it to fit it up the narrow stairwell – an hour had passed since we’d first arrived.

Tired, we headed downstairs and grabbed some lamb stew at a nearby cafe. We’d been told that there was a music festival in town, so we stopped by on our way back to the AirBnB. A man was stationed in the doorway of a restaurant, playing guitar while couples danced in the square. It was a pretty sweet gig for a musician, and a relaxing way to spend the evening, standing and watching couples dance. 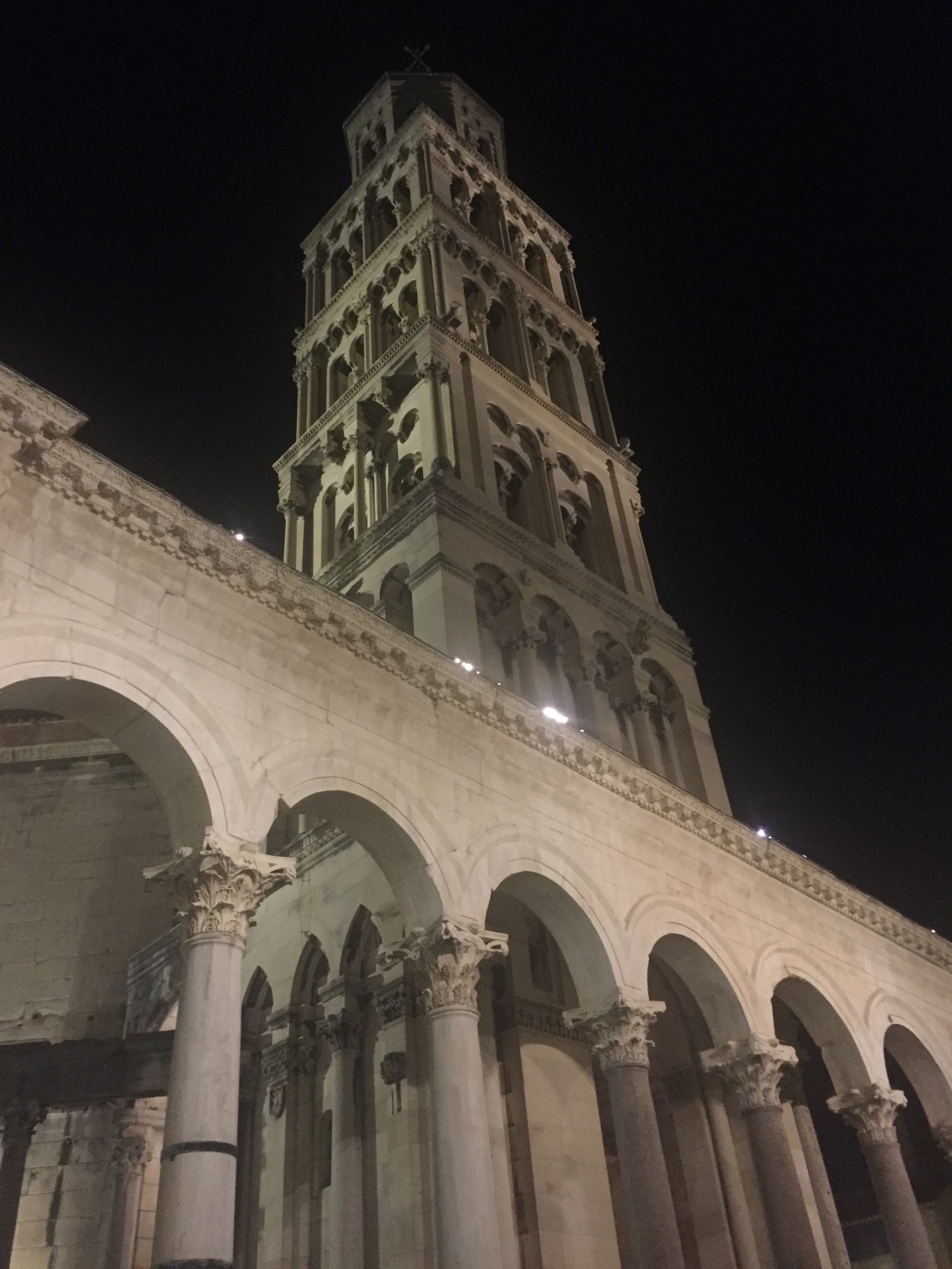 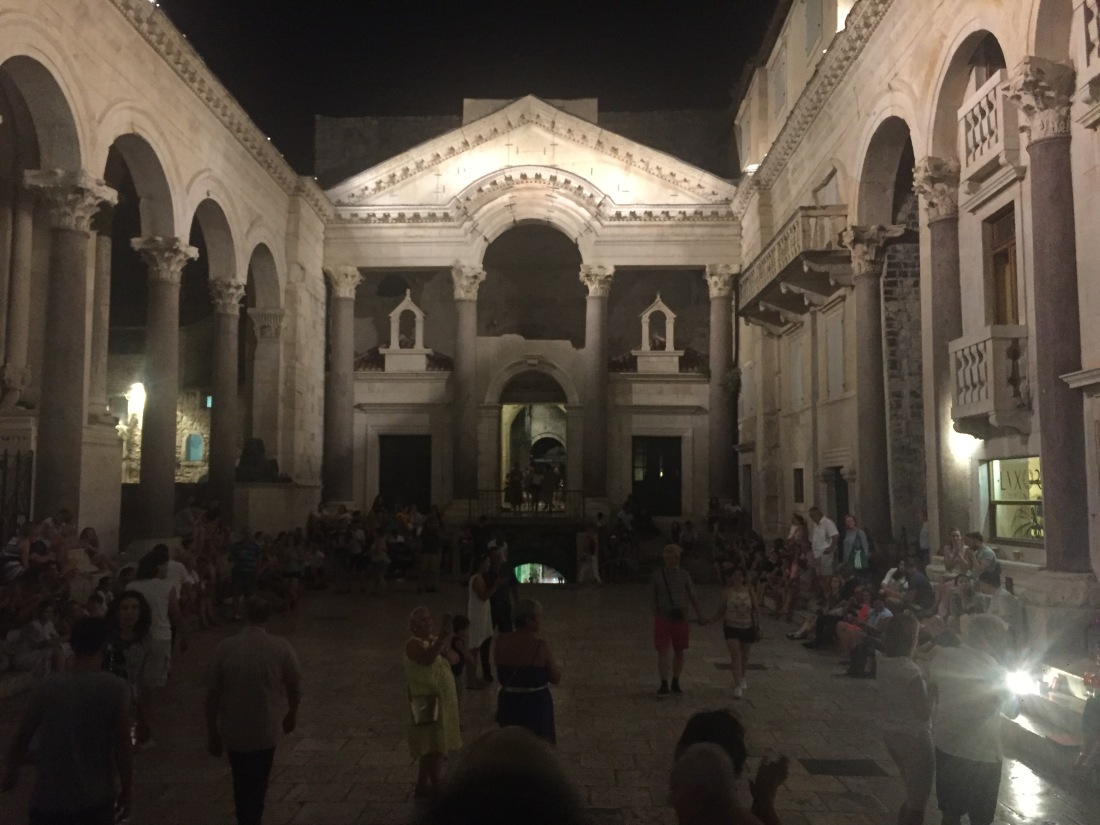 In the morning, we planned on catching a ferry to Vis, an island the Lonely Planet called “mysterious”, with the best beaches. We’d considered Hvar as well, but everything we read claimed it was a hardcore party island, so we nixed that pretty quickly.

We headed down to the ferry pier at 8:30 to inquire about purchasing tickets. The travel company, Jadrolinija, informed us that neither ferry nor catamaran would get us to Vis with reasonable amounts of time to relax there before making it back to Split with time to grab a sunset dinner and watch the World Cup.

Instead, she suggested Brač, a mere hour’s journey from Split and with lovely beaches.

Beaches. We looked outside the doors of the travel agency to watch the white-grey skies. It looked like rain.

We walked all the way down to our ferry, the farthest pier, settled down at the lighthouse to wait, and–

Rain. It rains the entire time, it seems. It rains as we walk back toward the ticket office on the pier for shelter. It rains as we gather with the huddled cluster of foolish island-goers beneath an awning. Motorcyclists and cars pull up to the gate to queue to board the ferry, and it rains. Rain runs off jackets, rain pierces the water surface, rain saturates our clothes and the entire trip. We are not feeling optimistic about reclining on a beach today.

We boarded the ferry 30 minutes before departure because it was sheltered and dry inside. And rather frigid, we realized. We huddled up at a window booth with shawls and sweaters. I bought a hot coffee and we watched through the window as the ferry chugged forward through white mist and rain and steel waves.

Somehow, miraculously, we arrived in a rainless but cloudy Brač. We’d done some research on beaches and settled on one called Banj (pronounced Ban-yuh), a pebble beach about a half mile walk from the ferry port. Once there, the sun poked free of the clouds a little, and we spotted a stretch of quiet beach brightened by blue sun loungers.

“Do you think the lounge chairs are free?” we wondered. I approached a boat rental booth and asked.

“Are these free?” I asked the man.

“No, it’s 30 kuna,” he added. I stared at him, blinking, and he broke out into a giant grin. Accustomed to Croatian sarcasm by now, I replied, “I feel like you’re lying.”

He laughed again, then, “Yes.”

Exasperated, I relayed this information to Kacey and Allison. Kacey suggested we assume it’s free and take the lounge chairs farthest from his office so he would need to make a real hike if he wanted to demand money from us. As we walked away, he did not follow.

Once we got comfortable, the sun finally cleared the cloud cover. It’s amazing how sunlight and warmth can transform you. We’d been testy that morning, irritable probably from all the traveling and all the rain, and now, as the sun began cooking my freckles, I felt at ease.

“Hello, how are you?” We opened our eyes to find a man in a polo shirt with a pad of paper standing before us. “Have you paid for these?”

“No. He told us these were free,” Kacey said, which wasn’t quite true, but I liked her confidence.

“The guy in the office,” Kacey said, pointing.

“No. I will call him,” said the man, dialing. Convinced we’re getting scammed, I got up and walked over to two other women reclining in loungers nearby. I’d noticed one was reading The Guernsey Literary & Potato Peel Pie Society earlier, so I immediately liked her and knew she spoke English.

“Did you pay for these?” I asked her, gesturing to the chairs.

“Yeah, they’re 30 kuna, with additional cost if you want to use the parasol,” she said.

I sighed. Never assume you understand another culture’s sense of humor after 3 days.

It didn’t matter. We paid the 30 kuna and enjoyed the sunshine. It was too cold for us to swim, but Allison and Kacey made a trip to the bar to get cocktails, so that was a perk.

My Aperol Spritz came with 3 straws and a plastic cocktail umbrella. Later, I learned how to say “no straw” in Croatian. (Bez slamke, if you were wondering.) 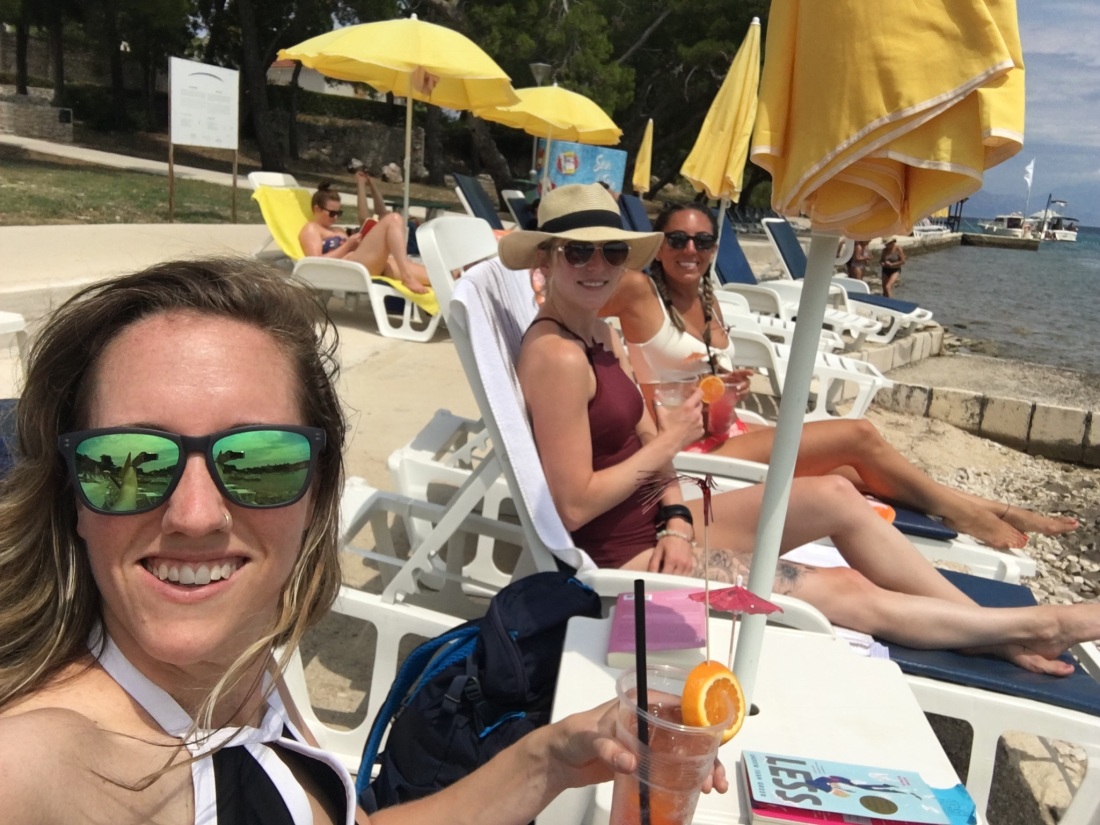 Made it to the island! I’ll have 3457 straws in my cocktail please. I have many mouths.

We caught the 3:30 ferry back to Split under sunny skies, returned to our apartment to shower with the small towels, and headed to Adriatica Graso for sunset views and dinner. The restaurant was over a mile of walking, but it was worth it. Located on the far side of the harbor, away from the bustling promenade, it wasn’t crowded and the food was delectable. Kacey and I each got the sea bass which came in a wax paper “sailboat”, and Allison ordered some kind of Dory pie stew with a fried dough cover.

At 9, we booked it back to the backstreets of Split to join the crowds of beer-drinking locals at pleasantly crowded pubs where the World Cup was playing on TV screens. It was Croatia versus Denmark for a spot in the semi-finals, and what better place to catch a Croatia win than…Croatia?

Allison was knackered, so she returned to the AirBnB before the game finished, a good call on her part as it spilled into overtime and then tense penalty kicks. Kacey and I were both exhausted too, but standing in this atmosphere fizzy with anticipation as the final kick went through and Croatia advanced and everyone leapt up screaming was totally worth it.

I went for a 5k run the next morning along the harbor, too late in the morning so the sun was scorching my shoulders and sunlight screamed off the promenade and into my eyeballs. We grabbed breakfast at Brasserie on 7, which served up hearty Acai bowls and omelettes, before heading out toward Dubrovnik.

Leaving the public parking lot, we patted ourselves on the back for doing parking right here and inserted the parking receipt into the machine.

I think we would’ve preferred the parking ticket at this point. The moral here is that parking prices are as muddy as sarcasm here in Croatia, and it’s best to assume you know nothing. 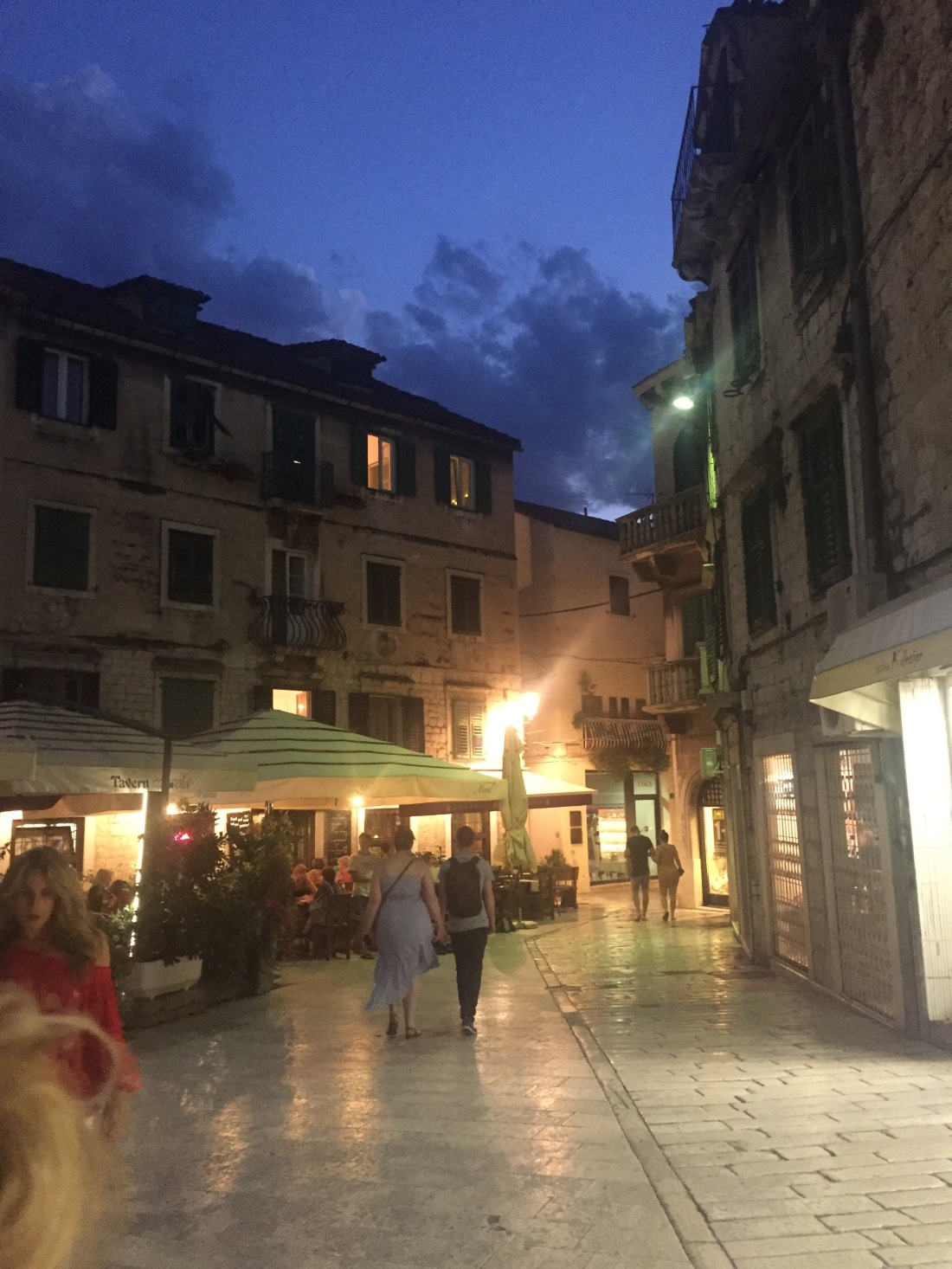 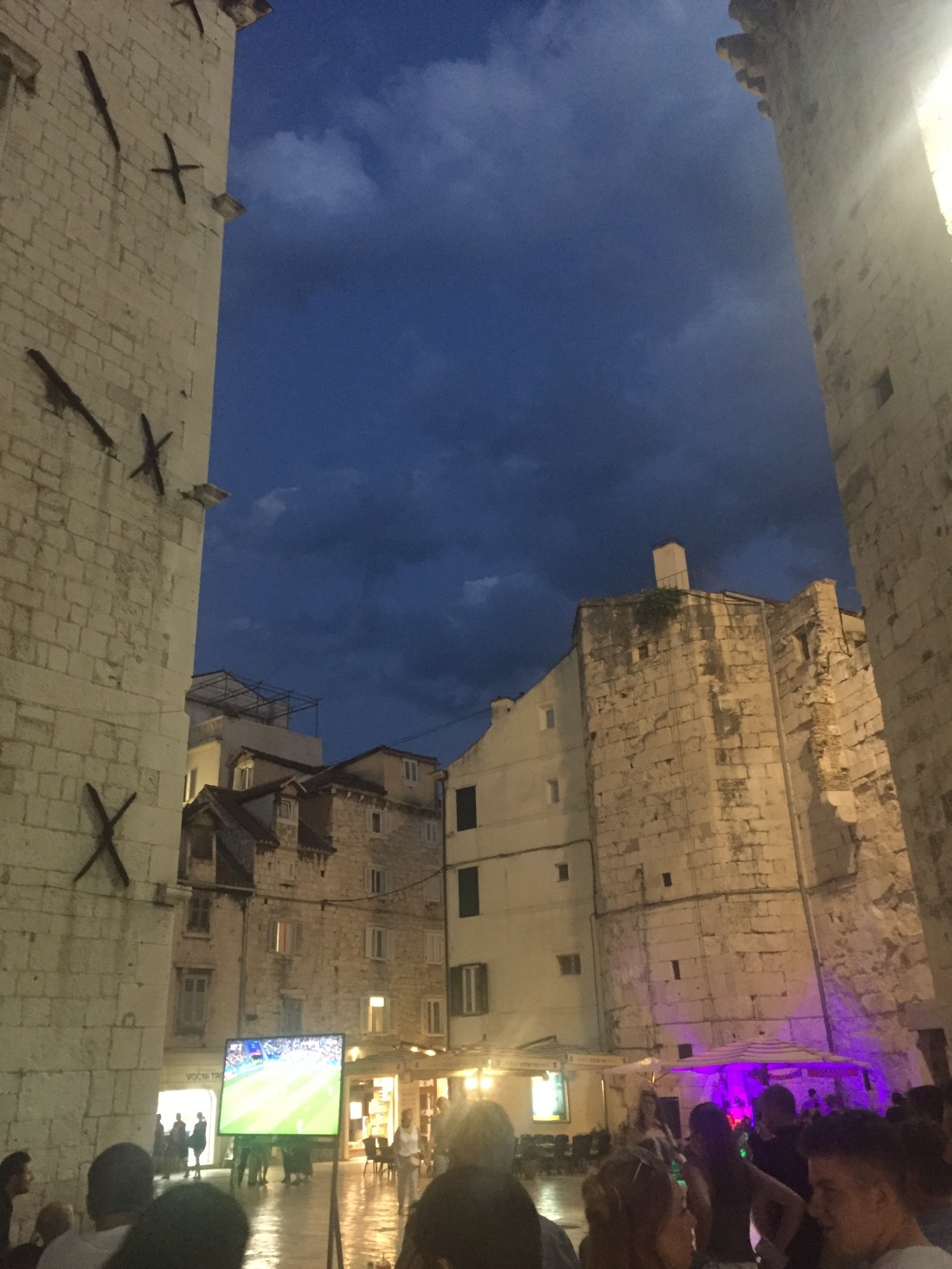