Before leaving the Westfjords, I asked Eyþór to help me map out a new route to take me from Flateyri to Þingvellir the next day. I wanted to soak in a hot spring before taking the plunge into 3C water in Silfra.

Eyþór recommended I set aside 10 hours for the drive.

“If you want to take time to enjoy the hot spring, and see some waterfalls, you will want extra time, especially if you want to make it to Þingvellir by 5pm.”

Undaunted, I set my alarm and rolled out at 7am.

The first order of business was to get gas, so I stopped at the N1. It was then, standing at the self-service pump, that I remembered the New Year’s fiasco from a few years ago, when Kacey, Allison, and I nearly didn’t make it to the airport because Icelandic pay-at-the-pump services require you have a chip-and-pin credit card.

Gas stations don’t open until 10 or 11am. I was faced with a choice. Either try to make it to Patreksfjörður, where a hot spring rested 100m downhill from a petrol station, on a quarter tank of gas, or try my luck in Ísafjörður. As the biggest town in the Westfjords, maybe it had an open gas station.

Going to Ísafjörður would mean nixing my fun route back, since it was out of the way, so I decided to brave the trek.

69km, 1.5 hours, on a quarter tank of gas. On a gravel road. Going and down mountainsides. About 7 minutes into the drive, which was taking me off the fjord coasts and into the mountains, I panicked. What if I ran out of gas here? I’d have to cancel the snorkeling and sit around waiting for some poor person to come and rescue my sorry ass. How embarrassing.

I wish I knew more about how much gas you can get to the gallon, but I didn’t, and so with heavy heart, I turned and headed for Ísafjörður.

In retrospect, I think I would’ve made it. But I would have spent every minute of the drive stressing out.

Driving to Ísafjörður meant going through that godforsaken tunnel again, where I met with a dozen cars rolling towards me, head-on. That was fun.

When I arrived in Ísafjörður, a town which one website hails as the “de-facto capital” of the Westfjords region, I was immediately glad I had opted to stay in the smaller town of Flateyri instead. With a population of 2,571, Ísafjörður was a booming city compared to Flateyri.

The first thing I saw as the fjord came into view was a massive cruise ship docked in the harbor. All of the local fishing boats were diminished by this behemoth, and I imagined the town crawling with tourists.

The upshot was that Ísafjörður had an open petrol station, which meant I could get gas and breakfast (a muffin and two cups of coffee for the drive). There were no fishwives sitting around gossiping over brunch; this N1 lacked the charm of the one in Flateyri for sure.

Sadly, I drove back the way I had come, along the same road. I was disappointed that I couldn’t enjoy more of the remote Westfjords, including the puffins who congregated on the Látrabjarg cliff. I kicked myself for booking something as touristy as snorkeling in a national park; if I hadn’t done that, I could’ve spent the day slowly driving back to Reykjavik. 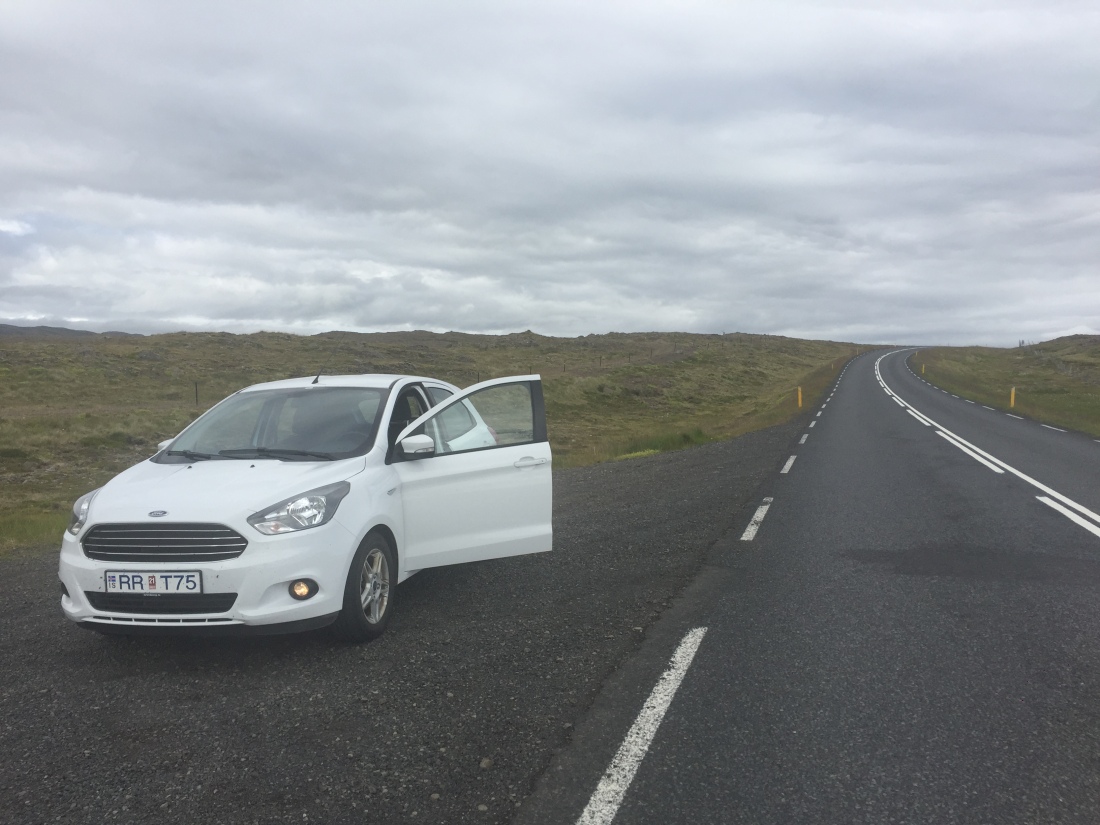 But, I reasoned, as touristy as it was, the experience itself would be awesome. One of the myriad reasons why Iceland is so freaking amazing is that it’s situated on the Mid-Atlantic Ridge. This means it straddles two tectonic plates: the one for America and the one for Eurasia. (This is also why Iceland is such a geologically eccentric place, with volcanoes and geysers and the like.)

The plates are drifting apart at approximately 2cm per year, which is crazy to think about; everything was once locked together, and these plates are already 5km apart.

And you can swim between them.

What adds to Silfra’s uniqueness as a dive and snorkel site is the visibility of the water: the water is so clear that you can see more than 100m in any direction. So I needed to stop moaning about my decision.

I arrived at Þingvellir at 4:30 after hauling it down route 1. The Silfra parking lot was further away from the main entrance, but I found it easily using the e-mail directions from Dive Iceland, a very informative and communicative company.

Arriving in the dive parking lot, I was immediately put off. Two or three dive company vans encircled the lot, with divers and snorkelers packed together, jostling for attention from the one company representative. It was a slap in the face of the isolation I’d enjoyed for the past few days.

At one point, after finally checking in and signing my life away on some waiver, I actually considered leaving. At this rate, I wouldn’t get to my hotel until 9:15, and I knew that most Reykjavik restaurants stopped serving food at 10pm. Besides, large groups are not much fun.

Thankfully, we were quickly split up into smaller groups. I was placed with a group of five friendly Swedish people, two of whom are enlisted in the Swedish military. They were pleasantly welcoming to me, and as time went on, I felt a lot better.

Of course, being in an awkward situation also helps bring people closer, so that was useful.

I say awkward because…have you ever worn a dry suit? Or prepared to enter freezing water? No? Let me tell you about it.

First of all, as we stood in the parking lot getting the briefing on what we’d do, our guide, Rami, drilled it into us that the water would be very, very cold. Alicia and Carl had done the snorkeling trip a while back, and Alicia confirmed the freezing water.

“My lips were like hot dogs afterwards!” she said, so I was prepared.

I am pathetic in the cold. My fingers freeze almost immediately and my whole body protests. The snorkel was only a 35-minute journey, but I imagined I’d freeze within ten minutes and need to be rescued.

“Here is where you will get out,” Rami said, pointing to a map of the lagoon. “You can explore the lagoon when we finish, or just get out of the water.”

I hoped I would be warm enough to explore, and resolved then and there not to be the first person out of the water. (Part of this was because I didn’t want my Swedish military friends to perceive me as the weak American.)

Then it was time to suit up.

First, we were instructed to put on a warm zip-up base layer. Then, we stepped into the dry suits, all tight neoprene. The rubbery turtleneck part was too loose for Rami’s liking, so he came around to each of us and fastened it with a rubber collar, resulting in restricted breathing and a quip from one of the Swedish men about S&M.

If the neck area wasn’t tight enough already, there was still a hood to pull over your head. It’s good they do this all in advance so you have time to adjust to the slower breathing and the tight clothing.

“Believe me,” Rami said to us, “you want it this tight. You’ll thank me later.”

We all waddled to the entrance point, where we spat in our goggles and de-fogged them before putting them over our faces. Then the snorkel went in and the flippers came on.

And after all that, the water felt fine. The dry suits make you buoyant, and there’s a bit of a current, so you barely have to kick your feet and can drift through the crack easily. The gloves would let in a little water, Rami explained, but your hands would warm the water,  and your hands would stay warm if you didn’t flop them all over the place.

Even putting my face in the water, the only part of me where the skin was exposed, wasn’t nearly as bad as I’d feared. Sure, my lips were numb by the end, but my face felt fine.

We began by taking a sip of the water – because it’s so pure you can drink it – and then moving through the strait. It was gorgeous. You don’t feel cold partially because you’re so distracted by the colors and the beauty of this freezing world below. There wasn’t much to see in the way of fish, but the rocks were amazing and the colors vibrant.

I made it out unscathed and drove back through the park, which is more amazing than I gave it credit for. Maybe I’ll look into becoming a park ranger in Iceland. I wonder if it pays well.

(All snorkeling photos courtesy of Dive.Is.) 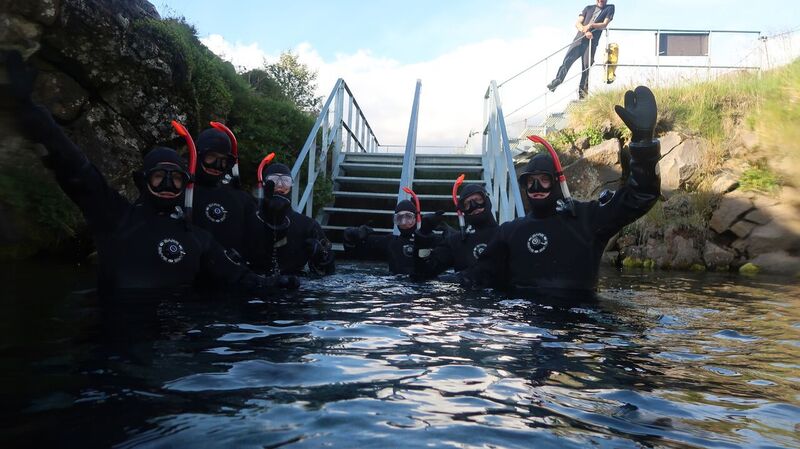 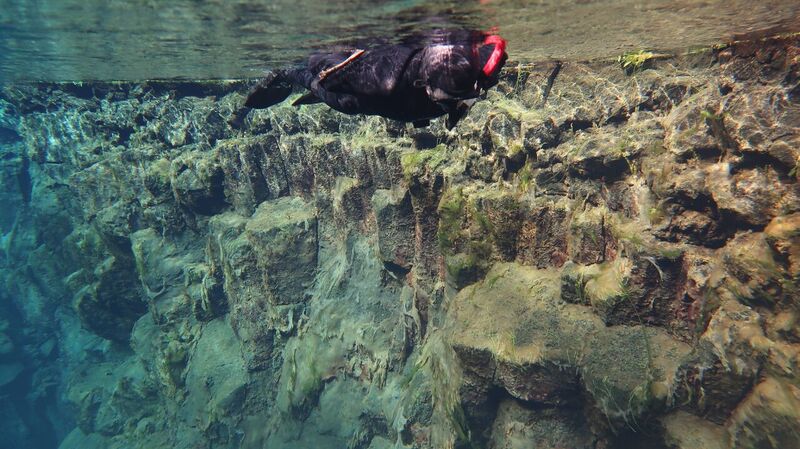 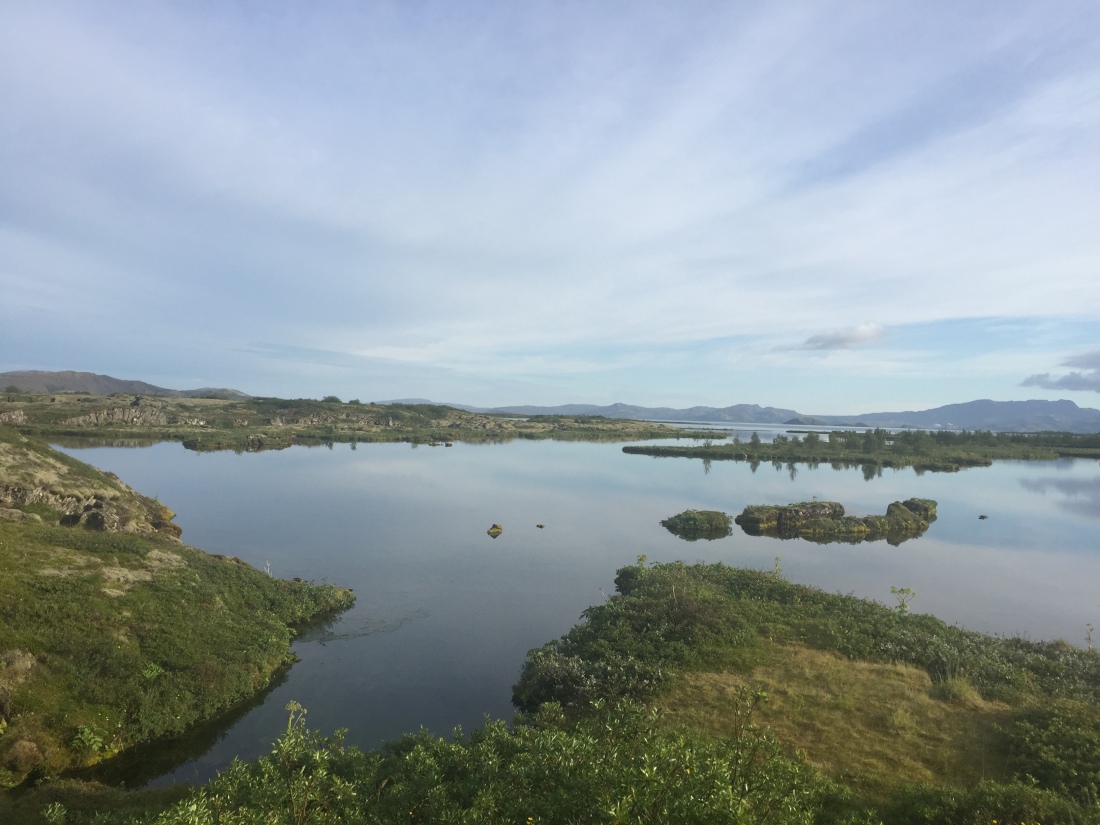