In the morning, we drove through Yellowstone on our way out to Utah. One thing I can’t stress enough about the national parks is…visit early. Or late. At 5:30am, no one was there checking park passes, and the traffic through the park was nonexistent. A few cars pulled over ahead of us just after we got in, and we joined them in looking at a fox or a wolf frolicking in the meadow in the early morning hours. If I could do it differently, I’d wake up early every day and get down there.

We stopped for lunch in Idaho in a small town called Pocatello, which Kacey Googled only to find a horrid murder story that occurred a few days earlier just next door: some guy had stabbed his girlfriend and buried her in the backyard, then stabbed both his dogs and did the same with them, and then posted gruesome, weird comments about it all on Facebook. It was one of the first violent crimes they’d had in ages, and we were rolling into a stricken town.

We ate at a crappy diner called Butter Burrs, which was unremarkable, then hit the road to Salt Lake City to pick up our RV. We loved our AirBnBs, but the idea of having all of our things in one place was very appealing.

I don’t know much about what happened with the RV pickup, because I had to drop the rental car off and wait at the airport, but Kacey and Allison filled me in.

We paid extra so we didn’t have to empty the waste tanks and could bring them back full.

“I asked the girl how to empty the waste tank and she waved me off, saying, ‘A family of 5 would only have to empty them every 4 days.’ Same with the grey water,” Kacey told us later. (This is important because, on Day 2, we all had quick showers and the shower backed up with floating debris inside. We were reimbursed.)

They picked me up and we headed to Trader Joe’s to buy enough food and spiked seltzer and wine to last for 7 days. And we did a damn good job of it. Our fridge and cupboards fully stocked, our suitcases all stored, we hit the road for the 2-hour drive to Wendover, Nevada, to an RV park we were staying in. We were all thrilled to have a toilet in the RV and not to have to walk to an outhouse in the middle of the night.

We woke up early and went for a 3-mile run in the hot desert before making breakfast and heading to the Bonneville Salt Flats, a picturesque, white stretch of world that blurred the line between earth and sky. And – it wasn’t crowded.

This last bit was surprising to me, and pleasantly so. We all took off our shoes and waded through warm, salty water. I hadn’t been expecting much, but Bonneville surprised me in a good way. We spent more time there than we all thought, and it was nice. 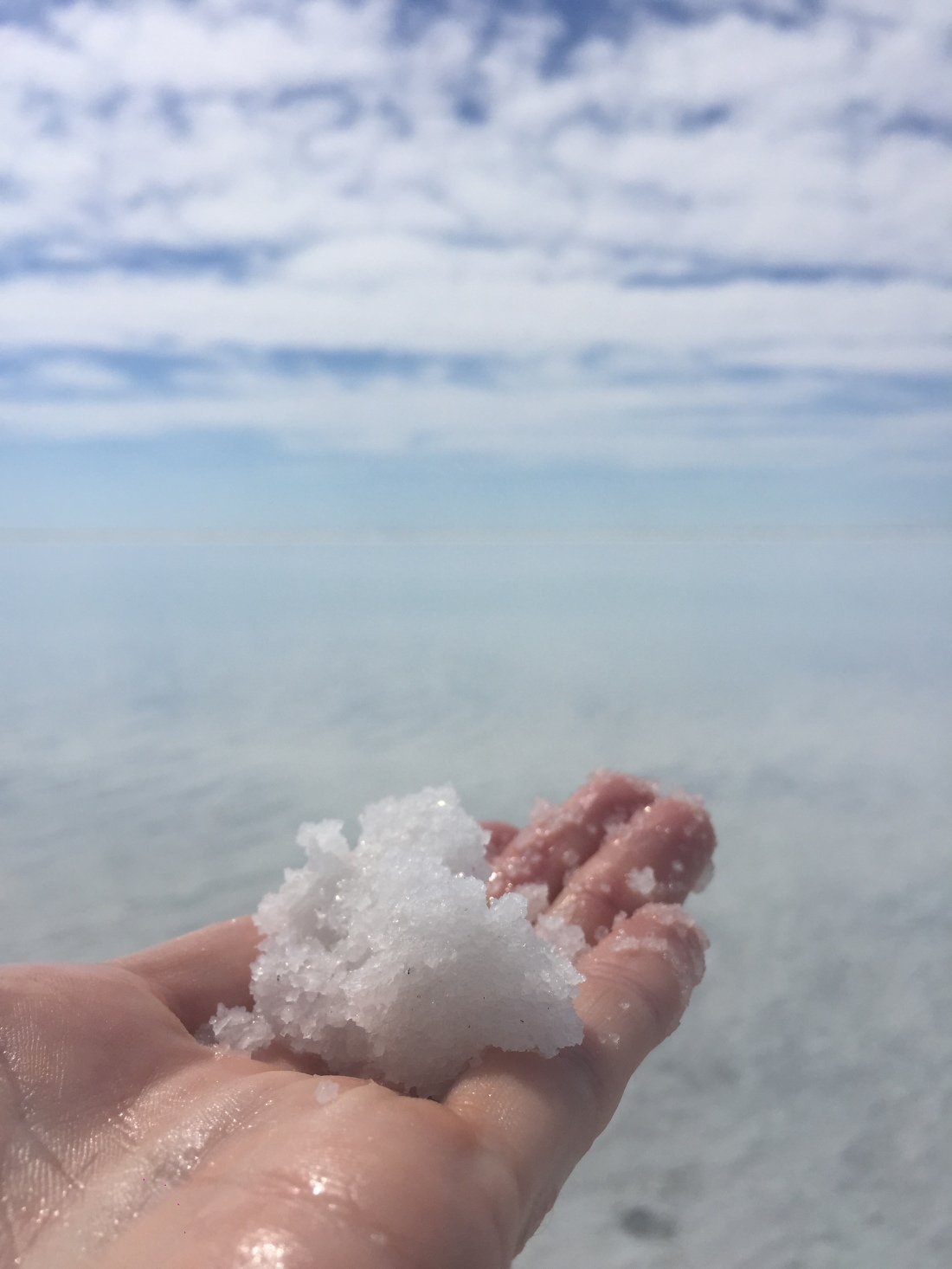 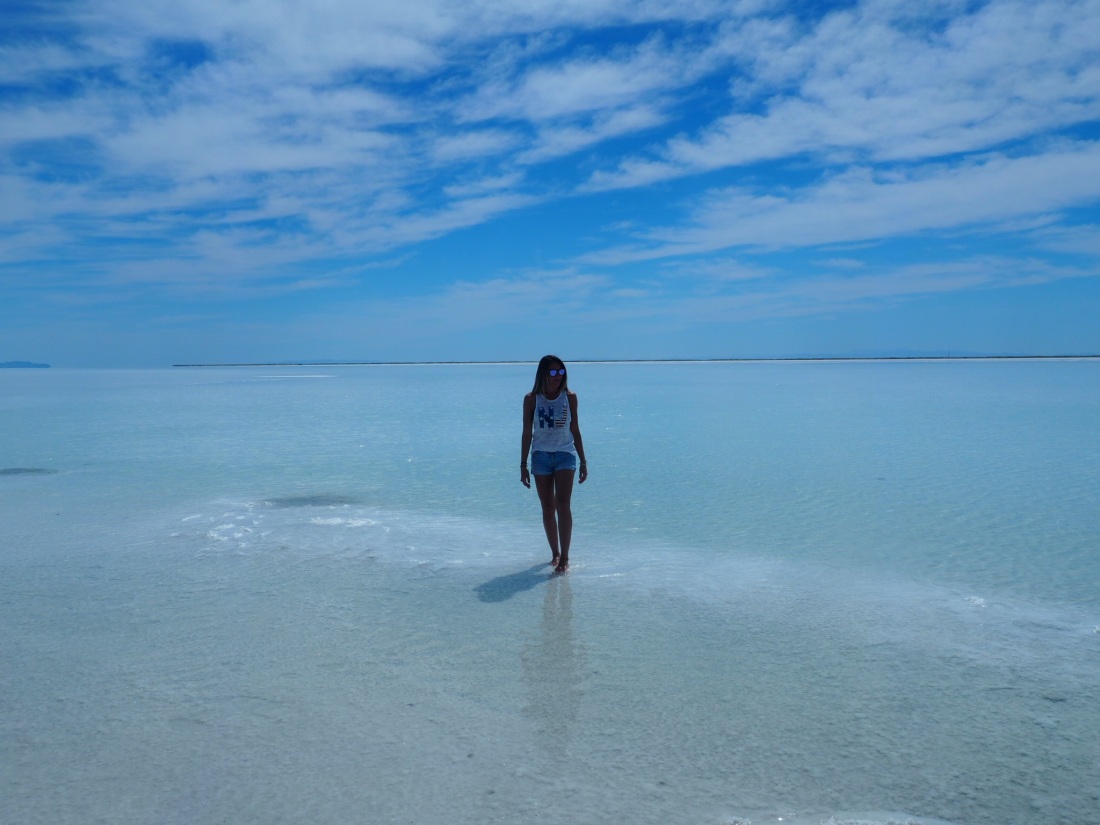 No filter needed when I break out the real camera. Kacey rocking her strut over miles of salt. 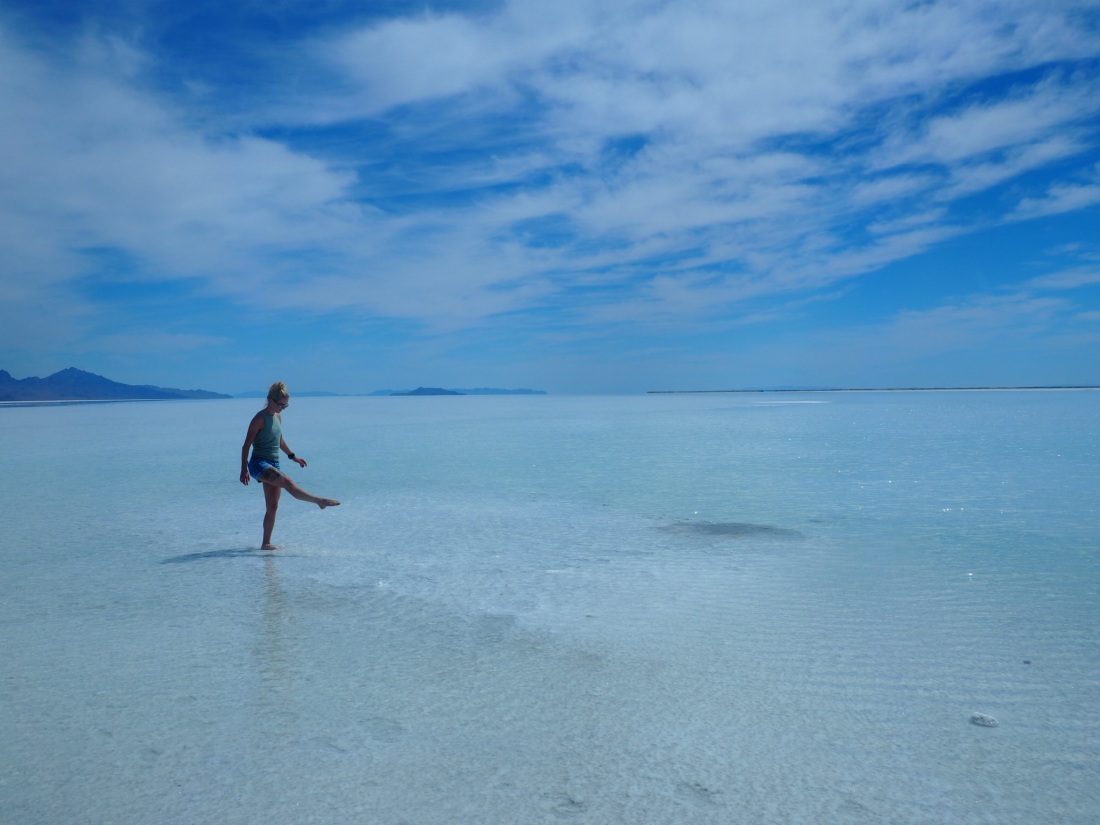 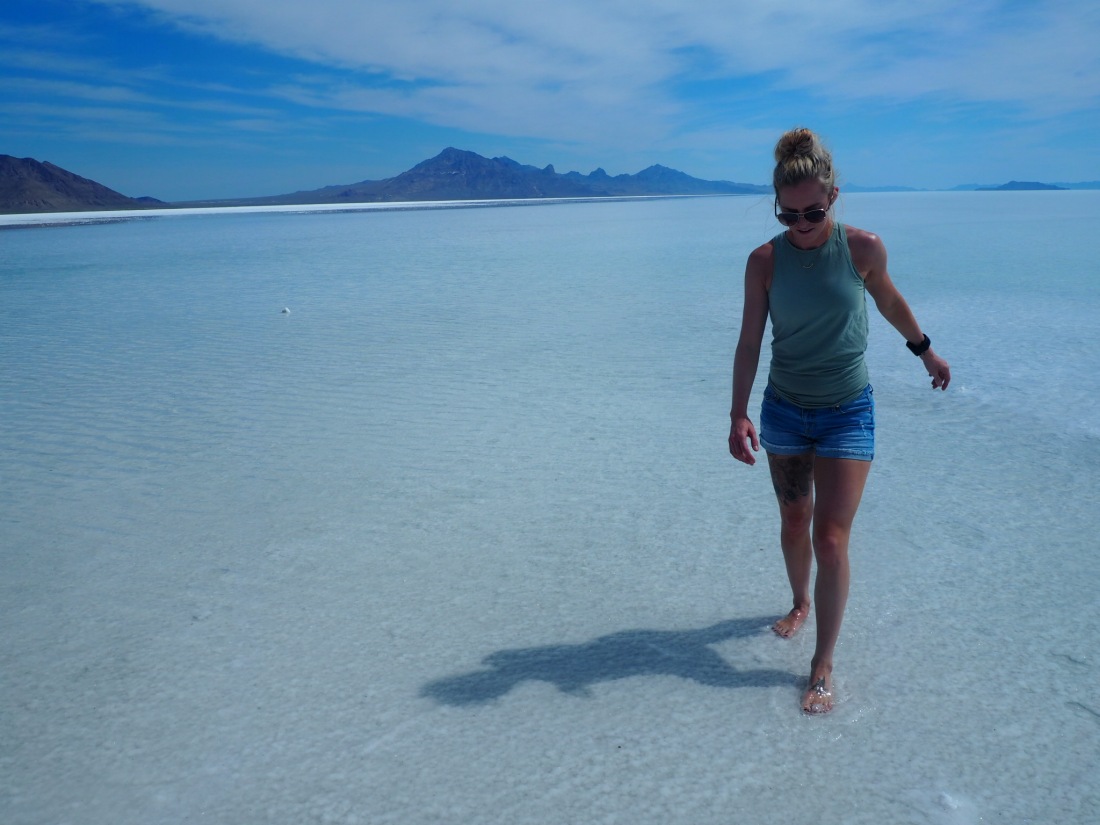 It’s harder on the feet than it looks.

Our next stop was something called Danger Cave, but our GPS wanted us to do some weird desert offroading and the RV did not like this idea, so we turned back and got onto the highway toward Moab. Kacey drove most of the way, and while it was hot and slow-going, the views were outstanding.

Utah is red and rocky, with scrub and hot sun and sizzling ribbons of road, but it was beautiful nonetheless. Kacey encouraged me to find some songs about Utah, which helped pass the time and helped me discover my new ear worm, “C’mon, Utah!” by Shovels and Rope. (Utah is a horse in this song, but whatever. Utah is Utah.) 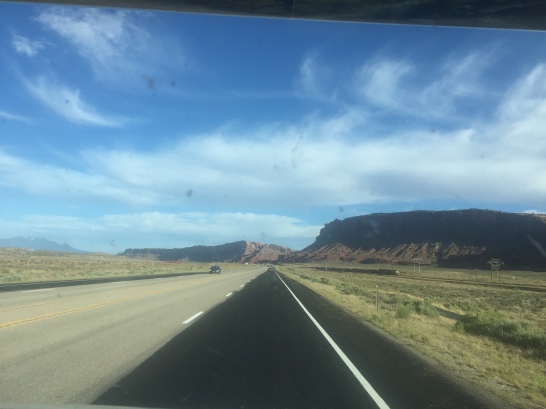 This filter is called “Windshield”. 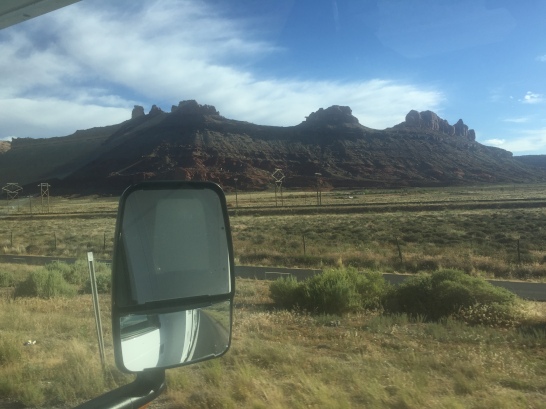 Yeah, those views will do.

Our RV park was clean and spacious, and our site was at the end of a long row. We’d been lucking out getting enough space. As soon as we settled in, we called an Uber to Moab Brewery.

The Uber situation in Moab is weird. I asked the RV park office manager about it and he told me that Moab usually has one Uber driver, and it’s some random person who comes to town and Ubers for a few weeks, then moseys on.

The current Uber driver was a man named Joshua, who scooped us from the RV park and drove us a few miles down the road to the bustling brewery in his bright orange Jeep Wrangler. He slipped us his card and told us to message him if we needed a ride and he didn’t show up on Uber.

The brewery was more like a casual restaurant, and it was crowded. We made it into the bar room, which was nicer than many breweries because Utah law is strict and does not allow anyone under 21 to even be in the room, so it was kid-free. 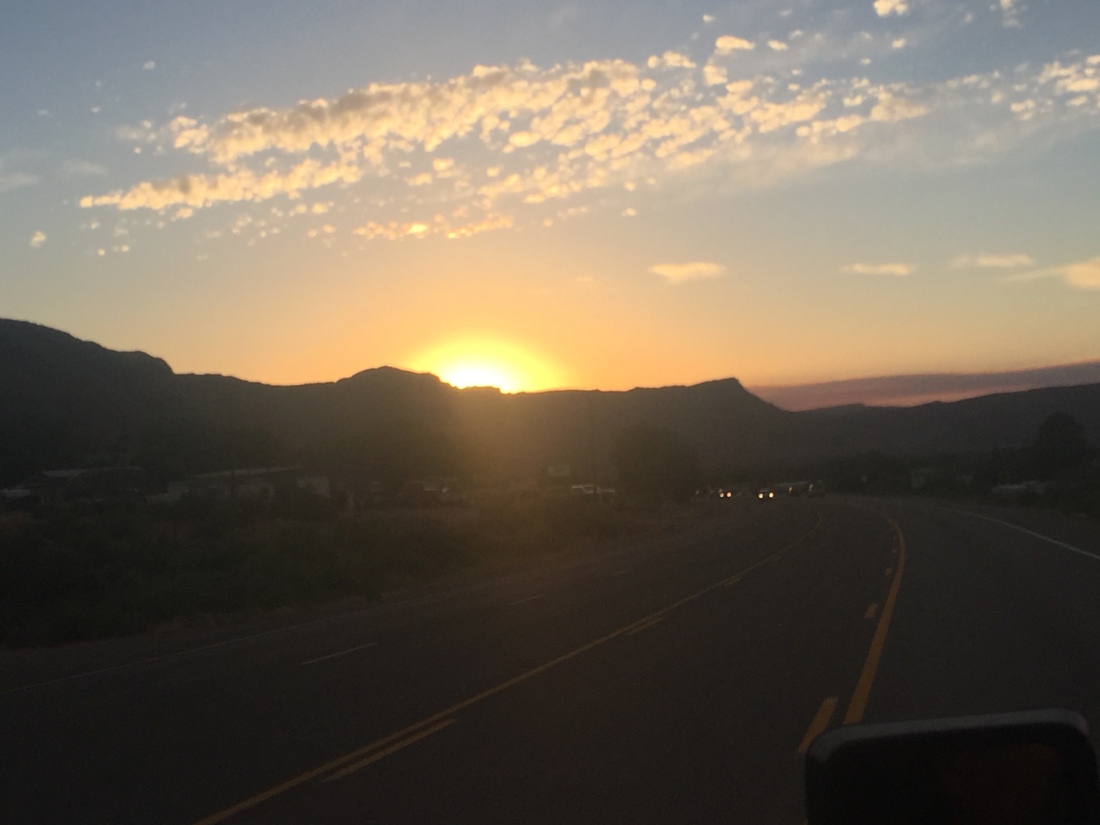 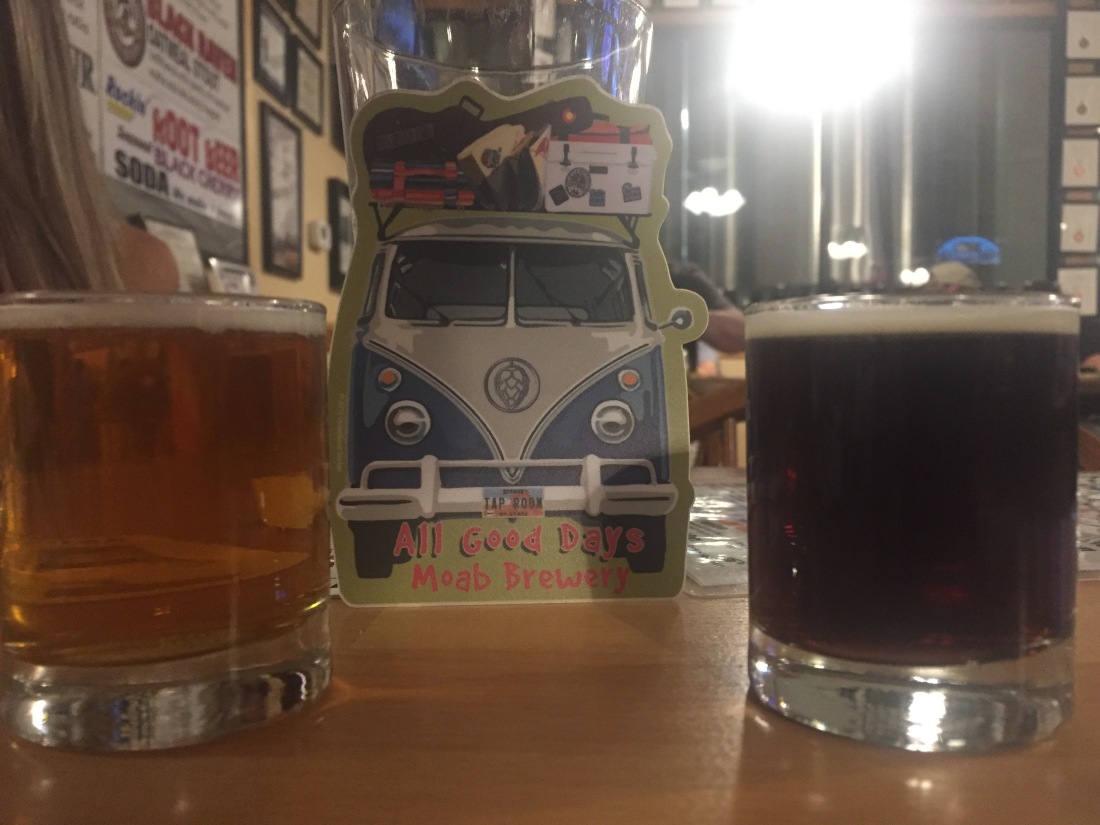 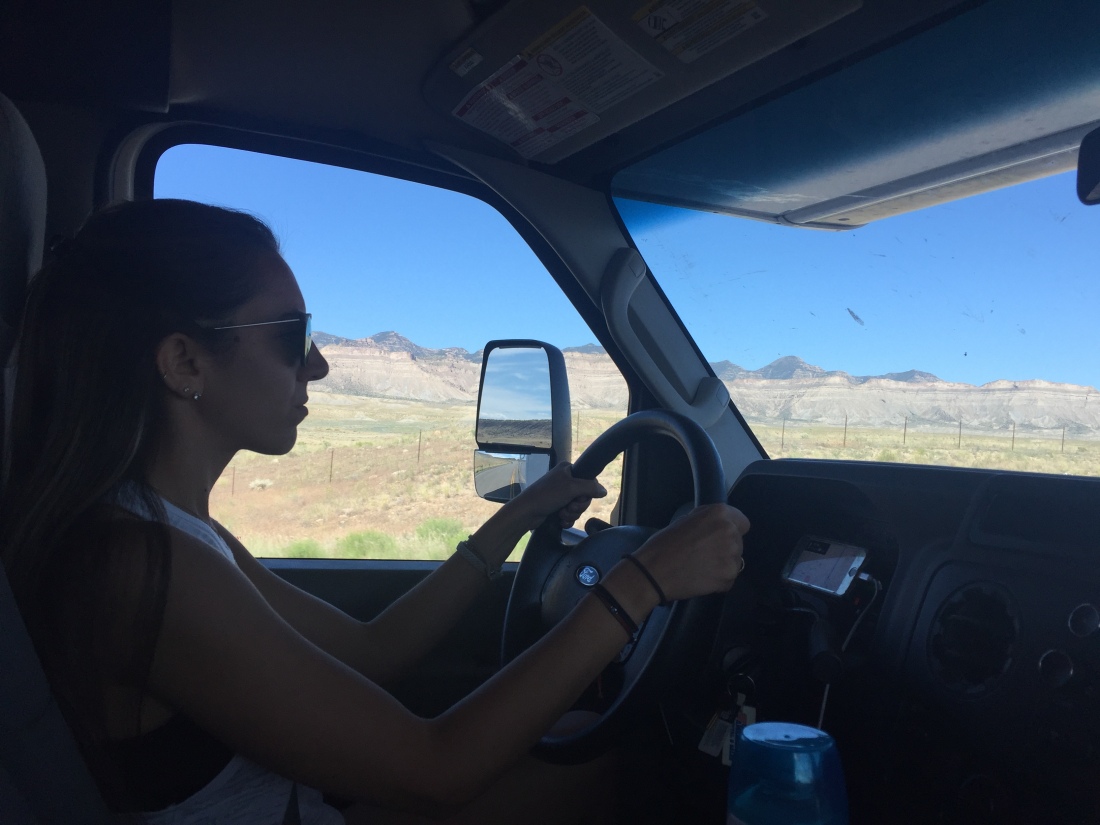 Utah law also prohibits selling more than 2 beers per person, so the brewery flights were comprised of tiny shot glasses of beer at 65 cents a pop. As far as brewery vibes go, it was underwhelming, especially for a town as hip as Moab, but it did the trick after a day of driving.

I called an Uber and Joshua came and got us. On the drive back, he suggested we get up at 4am the next day to hike to Delicate Arch for sunrise. This hadn’t exactly been on our itinerary, but we decided to give it a go.

We were all tired anyway and called it an early night, but only after stepping out of the RV to catch a glimpse of the stars. If you want to see a night sky lit up like someone has flung stars like so much sand, you need to go to Utah. Even with the flickering lights of Moab, the stars were incredible and the Milky Way ran through the center of it all.