I thought nothing could top the turquoise water and warm breeze of Alexandria, but this weekend came pretty close. After rugby, Simon, Blanca, and I threw our backpacks in the boot (as they say) and drove 2 hours down to Sinai to spend the weekend at the beach.
If you aren’t familiar with the Sinai Peninsula and the area by the Suez Canal, you should know that it’s a disputed border area laden with security checkpoints. We were stopped a few times on our way in, but nothing compared to the stop right before entering the tunnel beneath the Suez. Not only did we have to sacrifice our passports, but we had to get out of the car and watch as security personnel overturned the mats and sorted through the glovebox, sniffing Tylenol capsules and fondling the spaces beneath seat cushions.
At one point, while one worker was examining the trunk, another was rummaging through Blanca’s purse. He pulled out a stick of Orbit gum, unwrapped it, sniffed it, rewrapped it, and placed it inconspicuously back in her bag. This went on for quite some time, until Simon thanked them and climbed into the car on his own accord. I was happy to get back in, and even happier – albeit skeptical – that they had not even opened my backpack, as I’d kept it on my back.
Hacienda Bay was a quaint little beach resort and boasted the best sunset I’ve ever seen. It marked my first beach sunset ever, and there is nothing like a sky the color of a blood orange all aflame with a huge sun cut up by the sails of kite surfers. We took pictures, and then headed into the resort restaurant for some rice, veggies, and fish while Simon regaled us with stories of Irish folklore*. 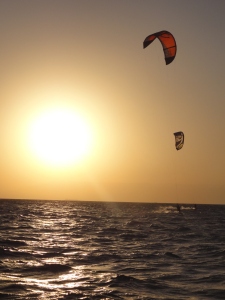 kitesurfers and the sunset at hacienda bay

We spent the evening at a little bar on the beach run by two kiwis with a penchant for kite surfing and cheap beer, and later sprawled out on the lawn to watch for shooting stars and satellites. For me, it was pleasant to just catch a glimpse of stars again. 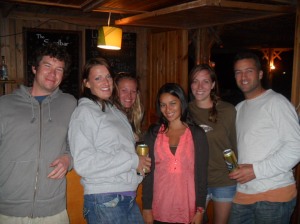 the only people at the bar

The next morning, after filling up on rolls and foul (pronounced ‘fool’), we decided to trek on over to Moon Beach, a ten minute ride down a long stretch of road. Cab fares were pricey, Simon told us, because the cab comes all the way out from the nearest town. Luckily, the resort was helpful. First, the three of us piled on a small quad and rode up from our villa to the reception area.

Then, our poor driver called us a truck (a lorry, as Simon calls them) to pick us up at the desk. The truck was small and the cab could’ve fit us, but we decided to ride the way they do on the Autostrad and in Central America (according to Blanca). We sat in the back of the truck and flew down the road, flying over speedbumps and spitting dust out of our mouths. 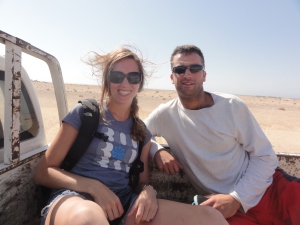 We arrived at Moon Beach in record-breaking time and I spread out beneath an umbrella to relax. The water here wasn’t as transparent and foamy warm as it was at Hacienda, but it was still fun to roll in it and stroll along the beach, cutting my feet on broken shells the whole way.

There is much to say about the weekend, but my pictures say it better than I could.

*My favorite tale was of leprechauns, or as Simon calls them, Little Folk. Simon never believed in the Little Folk until one night he was sitting in his car about to go inside when he heard giggling in the field behind him. Convinced that children were playing in the field well past their bedtimes, he got out of the car and looked into the darkness hoping to spot them. He didn’t see them, but heard their voices very clearly. He went next door to talk to his neighbor, who immediately came to the only plausible conclusion: Little Folk. Simon told us that his neighbor had seen one on the road once, and he’d emerged to play a little song on some instrument. The neighbor, who had been walking a donkey, looked to see if anyone else was around to spot the Little Folk and when he turned back, the little person was gone. The donkey had stopped in its tracks, though, so the neighbor knew he wasn’t seeing things. I learned that leprechaun is a degrading term, that you leave them alone or they’ll mess with you, and that people in Ireland DO avoid fairy circles, they do not mess with stones that lie on the property of the fairies, and Simon knows of two mountains in Ireland where fairies are known to exist. The story was chilling, but we were all tired, so when Simon attempted to recreate the sounds of the Little Folk, it was so unexpected that we couldn’t stop laughing. It was even better when he walked down to the beach and tried to recreate the scene entirely.