Had I been alive during the Vietnam War era, I’m pretty sure I would have opposed the war. This seems like a bold statement to make, especially since I’m not nearly as informed as I’d like to be regarding the war, but from the amount I’ve read and researched – public opinion and media influence aside – I don’t think it’s something I ever could have gotten behind.

There seems to be a sort of parallel between the opposition to the Vietnam War and the opposition to the US’s most recent war in that many of the people remain against the war while in support of the troops. This distribution of support is precisely what I felt while visiting the Cu Chi tunnels.

About an hour out of Ho Chi Minh City is the town of Cu Chi, a relatively rural little town nestled in the jungle. I ventured out here on my own and left Susannah and Diane to enjoy a day of shopping in Ho Chi Minh City. I had heard that the tunnels would be a good experience – from non-American friends and Americans alike – and my interest in history mandated I check them out. With some knowledge garnered solely from my Lonely Planet, I signed up for a tour and headed out.

There were 50 tourists in my group, and none of them were American. (Granted, most of them were from various Asian countries, but still.) This made the experience even more memorable.

Our guide spoke with very broken English and, in that dreaded elementary style, made each of us introduce ourselves and state our nationality. After, he informed us that if we did not follow him, we would get shot. (After he repeated this a few times, I realized he was saying “lost,” but I figured “shot” was as good a word as any since there’s a shooting range on site and hey, it’s possible to wander into one if you’ve lost track of where you’re going.)

We arrived and were rapidly shuttled down into a semi-underground room where we sat on low benches in front of an old television set. To the right of the TV was a diorama showing the underground tunnel system and to the left was a large map outlining the tunnels of Cu Chi and elsewhere. War aside, the tunnels themselves are intricate and impressive. Originally, civilians dug the tunnels beneath their houses so they could survive bombings, but as time went on and soldiers began to further infiltrate their town, the tunnel system grew more and more complex and contained chambers used for cooking, ammunition storage, medical care, and strategics.

This I learned both from my Lonely Planet and the documentary – shot in black and white in the ’60s – we were shown  that delineated the predicament of Cu Chi during the war and its noble retaliations. Here’s where that whole paradox idea kicks in: I can understand being invaded by a foreign power and having your village – for the sake of appeal, let’s say the town really was peacefully minding its own business at first – ransacked, and how unifying and empowering it would be to actually defend your village – especially using an impenetrable tunnel system – and how proud you would be to talk about it years later. (You know damn well we’d be doing the same thing back in the States if foreign enemies landed on our shores.)

These look impressive, until you look to the right and notice the water entrance. Then they become awesome. (In the original sense of the word.)

But at the same time, it makes you cringe to hear about the fighters of Cu Chi who were nobly awarded “American Killer Hero” after disposing of anywhere from 14-18 Americans. (Maybe it doesn’t make you cringe, but it certainly does it for me.)

The documentary highlighted the complexity of the tunnels alongside the cunning design behind bamboo booby traps and recycled American weapons. (While I can see the nationalism in the video, a lot of it seemed a bit exaggerated, and I noticed a few other people stifling snickers as well.) Halfway through, our guide thought it was time to hurry along, so we were whisked out of the viewing room and up onto land again, where we eventually came to our first trap door.

Who can spot the trap door?

From this point on, imagine machine gun fire erupting in the not-so-distant distance. (The nearby shooting range certainly made you feel like a war was nearby.)

The first tunnel was – I believe – accurate in its original size. Our guide explained how to descend into it and allowed for five volunteers. I went down second, nervous partly because of the tiny size (and partly because the guide had actually stood on the trap door while the previous person was underground), but surfaced unharmed. The size of the tunnel made it very clear why it was so difficult for western soldiers to find any Viet Cong or supplies, and our guide continually stressed the advantage of small size that the Vietnamese had over the westerners. 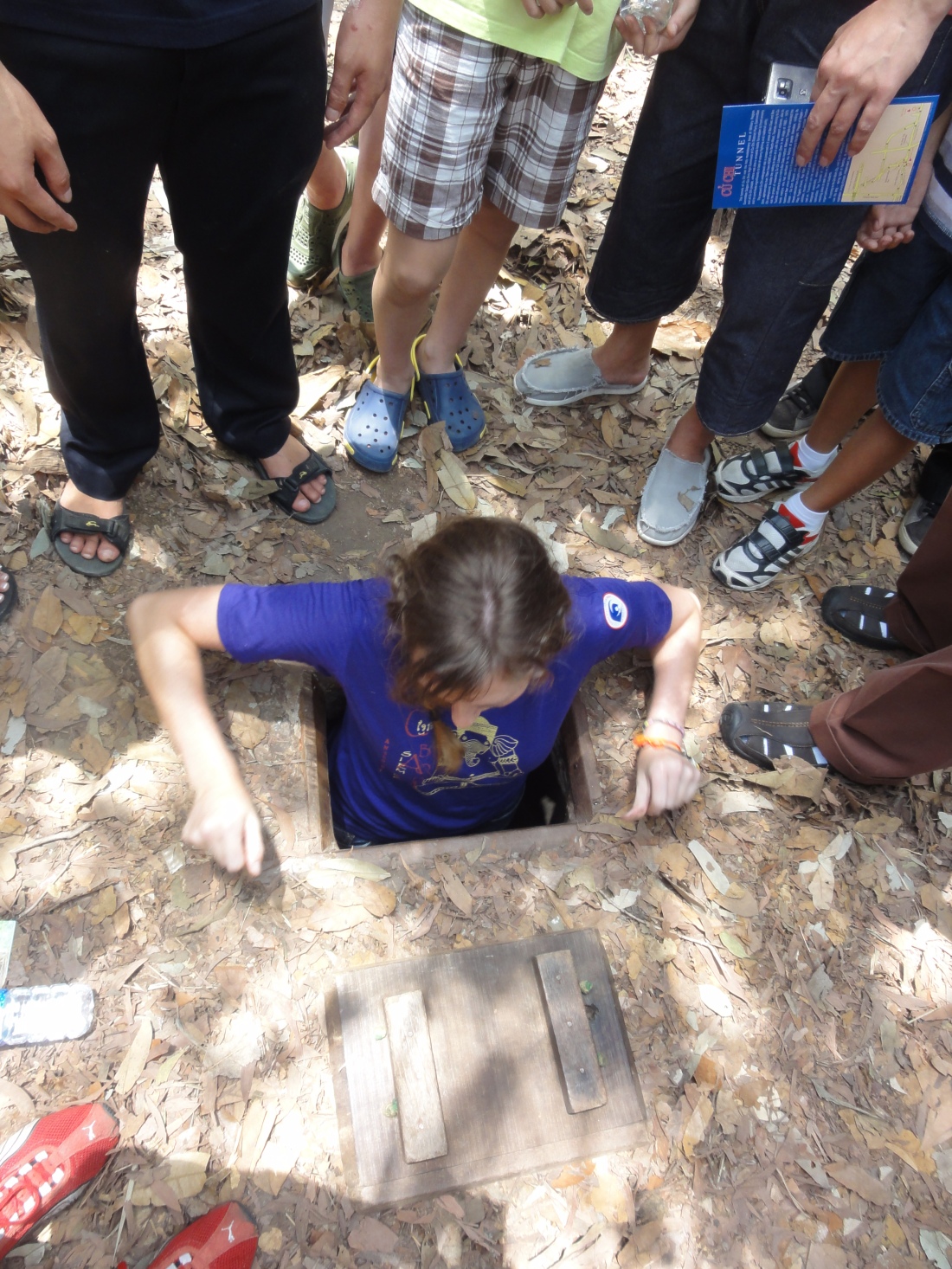 After the first tunnel, we were shown a series of bamboo booby traps that made me shudder. Most of the group found them hilarious, especially when our guide poked and prodded them with a long stick, demonstrating how the unwitting soldier would have descended not into a horrible death, but into a terrible trap that slowly and agonizingly ensnared him until a Vietnamese soldier came by to take medical supplies.

The traps, like the tunnels, were impressive, but in a very grim sort of way; I was happy to spot two other tourists – westerners, of course – who weren’t in stitches to see them.

After a quick break at the shooting range, we were led to a tunnel that stretched 100 meters and had been widened for tourists. Our guide informed us that anyone who crawled the full 100 meters would get a hamburger, but even that wasn’t motivation enough. Marked with exits every 20 meters or so, the tunnels were still extremely tiny and lit only with very dim bulbs.

Once you descended, you couldn’t turn back.

I’ve been in many small spaces before, some of which set my inner claustrophobic panicking, but this one took the cake. The first exit that appeared on my left was as welcome as any, and I literally darted up into the light and out of the tunnel.

I don’t know how anyone – Vietnamese or western – could have survived in anything smaller. My thoughts went to the “tunnel rats,” or those soldiers specifically trained to crawl into the tunnels with nothing but a knife, flashlight, and string and see what they could find. (Consider the size of the tunnels and the fact that the system was so complex that even the Vietnamese sometimes got lost – and died – in them, and you might have some appreciation for those inhabiting the tunnels.)

Sidenote: According to Wikipedia, it was an Australian troop that first ventured into the tunnels, labeling the brave tunnelers “tunnel ferrets.” The Americans caught on after.

Our tour ended in a canteen, where we eagerly awaited our hamburgers. Instead, in a sort of cruel joke, we were given some strange boiled thing that our guide, through spurts of uncontrolled laughter, called ‘hamburger.’ It turned out to be cassava root, which is sort of like a potato; it’s easy to grow – a tree takes about two months, I believe – and easy to boil and eat, so it acted as a staple during the war.

I left with a new appreciation of what both soldiers and civilians experienced during the war and with Bruce Springsteen’s “Born in the USA” stuck in my head (which is actually a protest song, if you didn’t know). 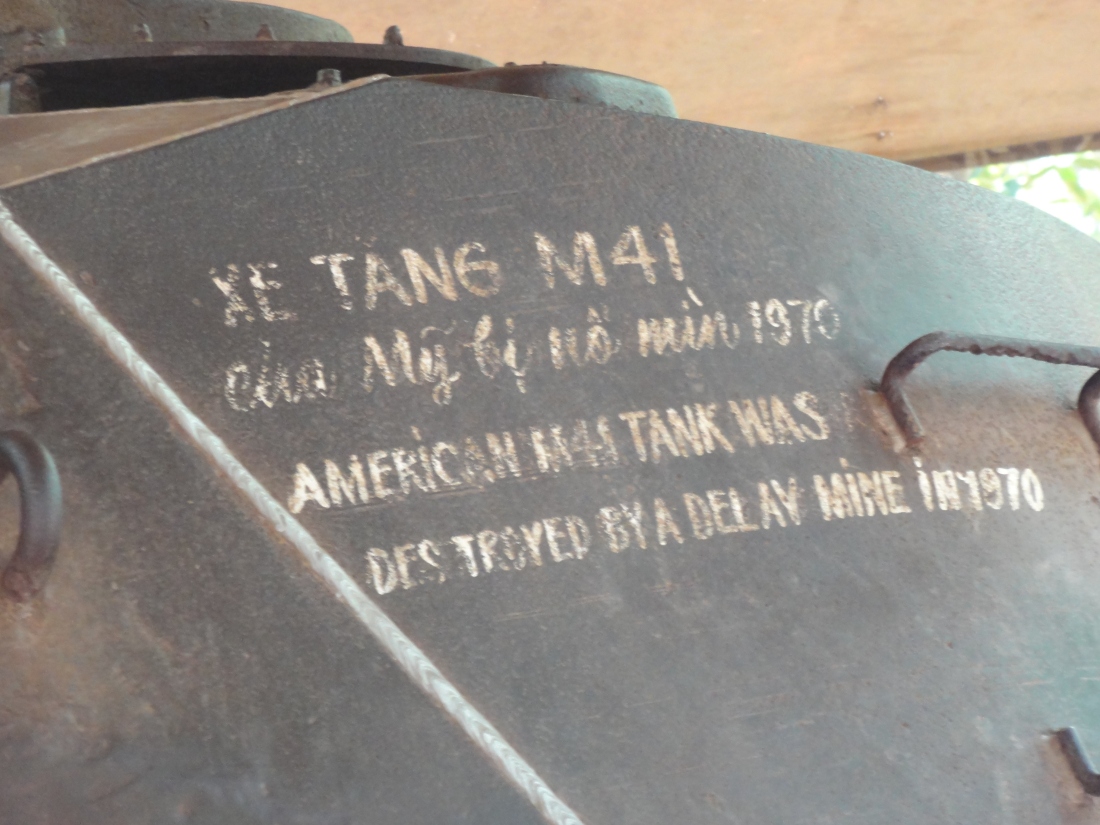