Cambodia is not what I was expecting but by this point in the trip, I am used to it. Siem Reap is not the small, populated city I’d been picturing; instead, it seems to grow up out of the dust and is breathtaking in its optimism and resilience.

Getting there was a bit of a fright. Angkor Air does not exist. Imagine arriving at the airport, scanning the departure list for your airline, and not seeing it at all. Before panic could fully set in, we approached the information desk and, to our surprise, found helpful and positive people who were quick to solve our problem and inform us that we were actually flying with Vietnam Air. That was refreshing.

I knew Siem Reap would be completely different as soon as we landed. The airport looked as if it belonged in a gated, affluent Miami beach community; ensconced in a verdant lawn with a sloping orange roof, it may as well have had a built-in pool around back. When the plane landed, we clambered down the stairs onto the tarmac in the middle of a sweltering morning.

There was nothing around the airport. As we were driven out and into Siem Reap, I was surprised at how much the surroundings reminded me of what a village in rural Africa might look like.

Shacks and shops sporadically appear along the roadway, which is populated by tuktuks carting around many a western tourist. (I saw more tourists here than I ever have in Cairo.) In fact, I feel invasive in this landscape; watching throngs of tourists in happy pants and North Faces chattering excitedly along Pub Street makes me feel uncomfortably out of place.

In a way, it’s remarkable. Here is a place that was virtually closed off to the world in the 70s and 80s, where genocide and the horrific regime of the Khmer Rouge killed thousands and still lingers in contemporary politics. And despite this, Cambodia is infiltrated with tourists acting stingy over $11 three-course meals. We haggle and drink their beer and pay to see the Wats, but after a few days, a week – we leave. And their economy, ever on the mend, doesn’t seem to improve.

The 13th, we are informed, is Khmer New Year. There will be water and colored powder, mainly in rural areas, and not in Siem Reap. But that’s okay. Siem Reap is still pretty decked out for the holiday, and our little “hotel,” Megenrei, is sparkling behind the multicolored bulbs and lamps. 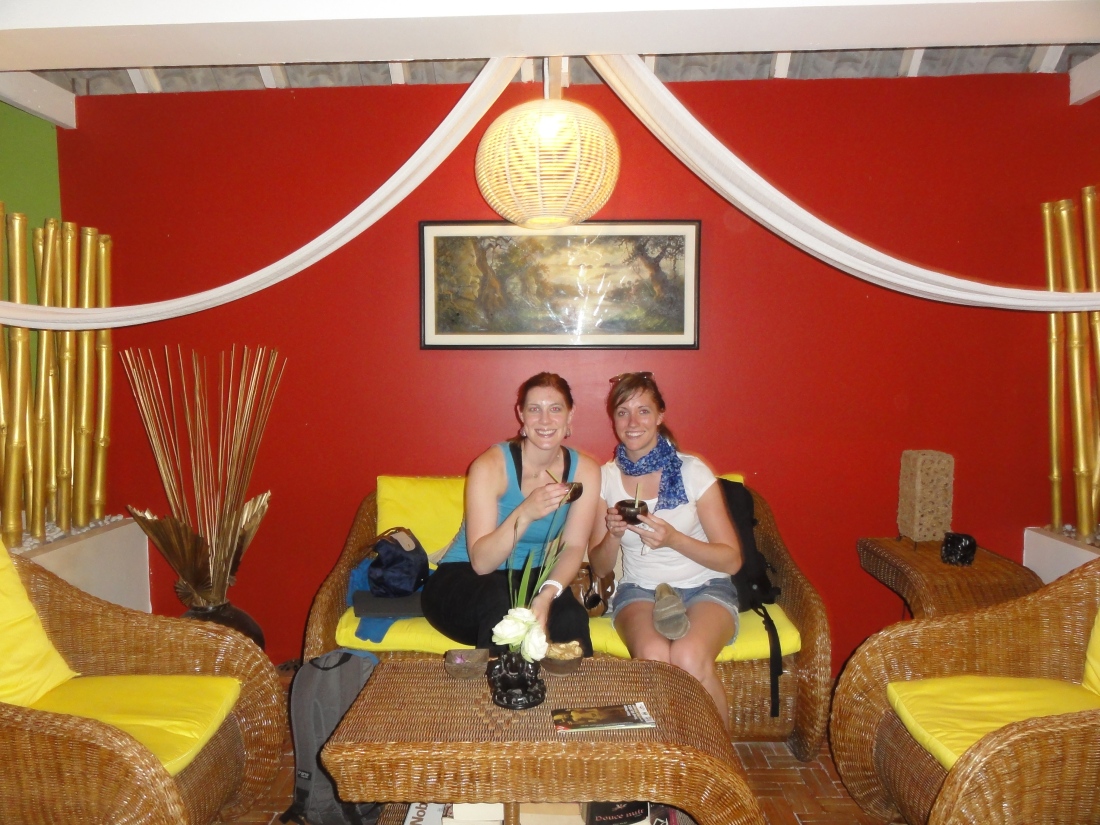 After dropping our things off at the hotel, we rent rusty bicycles at a grand total of $2 and ride around for an hour or so. Maybe more, maybe less. It’s nice; it feels rebellious and satisfying to lose track of time – and to be able to lose track of it.

Our road takes us past gas stations and old Coca Cola stands. We turn eventually to look for Angkor Wat and follow a road along a green canal, where kids sell lemonade on the corner and nary a car is in sight. The heat is oppressive, with an occasional relieving breeze. After not finding Angkor Wat, we turn back and have drinks and hummus at a corner cafe (with air conditioning!).

a road in cambodia

The shower at the hotel is pointless. The heat is sweltering and the soap is useless. Sweat literally drips down my spine as I spray sticky toxic DEET all over my arms and legs before heading out to a dinner on Pub Street at Le Tigre de Papier.

I manage to accompany Susannah to the night market, where we indulge in a fish spa and free beer for $2. If you’ve never had a fish spa, I suggest you try it. You basically submerge your feet in a tank of hungry fish who nibble the dead skin off your footsoles. It’s ticklish more than anything, although once in a while you get a hungry, strong-jawed poisson in there and suffer a little bite. 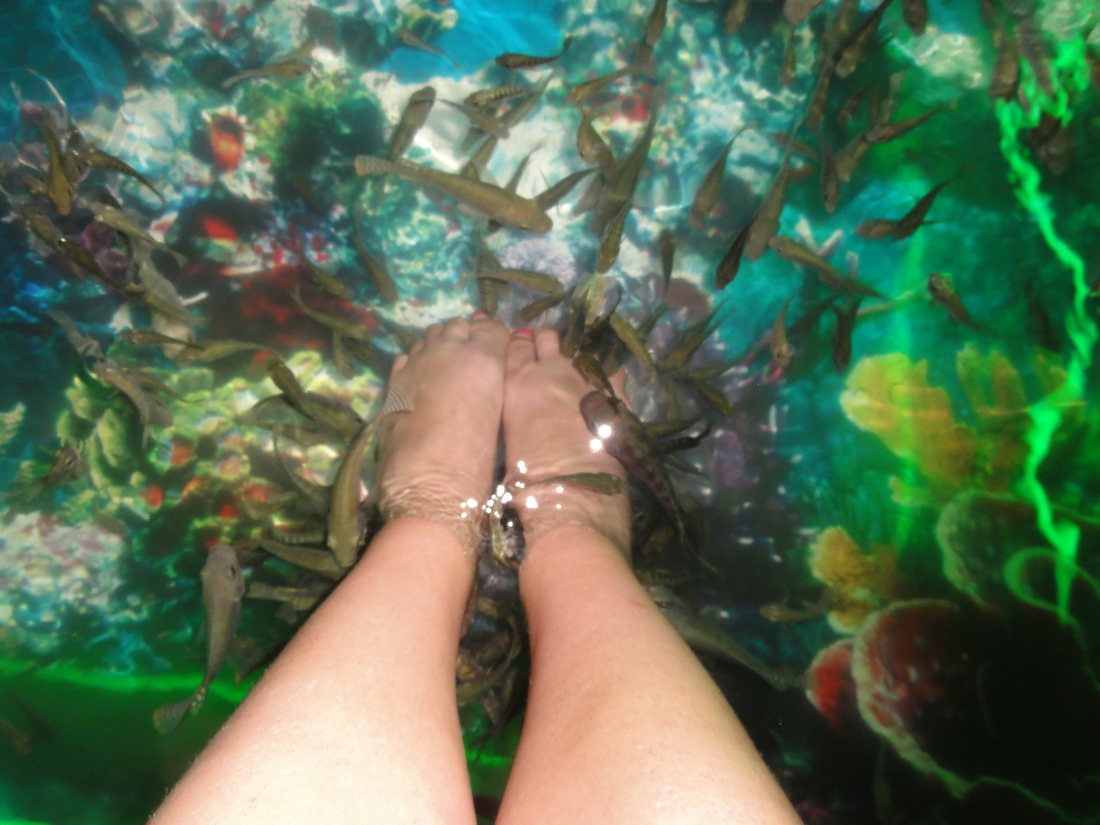 Again, we are confronted with the strange convergence of tourism and reality; while haggling for bracelets and watching western backpackers perusing stands at the night market, we’re faced with small bands of mine victims playing instruments for money. It makes you feel a bit guilty, like you’re taking advantage of the country – we see the beauty it possesses, but don’t invest in it for the long run. 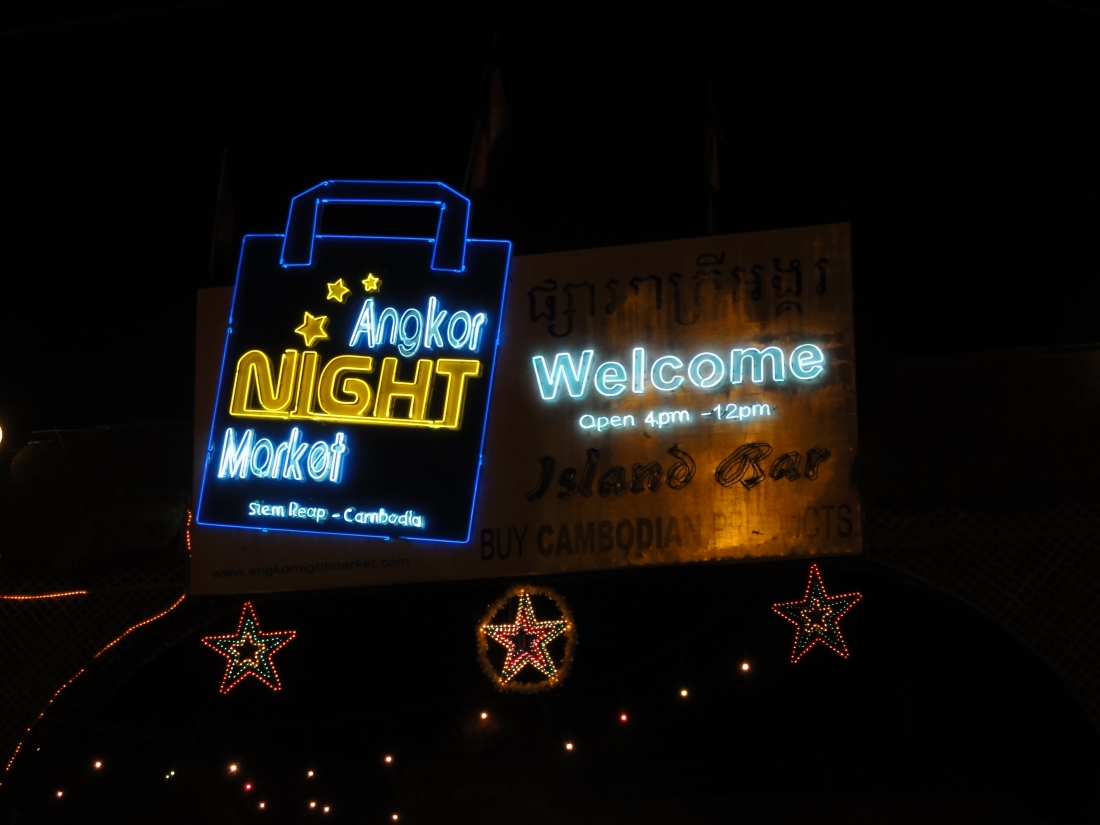 A day infamous in the Western world as a time for bad luck (Friday the 13th) is, here in Cambodia, a time for good luck and fortune as Cambodians ring in the new year.

Today, we go to the temples.

We begin in the Angkor Thom complex at 9:30. This is where many great temples lie in ruins, including the well-known sites of Bayon, more famously, Ta Prohm, a crumbling stone fortress impaled with behemoth trees whose gnarled roots squeeze the statues like snakes. It’s as if, over time, nature and culture have quietly and naturally converged.

One of the most striking things about these wonders nestled in jungle and foliage is how well-preserved they are and how remarkably isolated they remain from the world given their recent exposure (Ta Prohm and Tomb Raider, for one). Their splendor and solitude is rivaled only by that of Machu Picchu (at least in my opinion), but even that is incomparable.

What’s also shocking is their preservation throughout years of tumultuous history. Despite French influence, the invasion and occupation of the Vietnamese during their war, and the destructive and horrific reign of the Khmer Rouge in the 70s-80s, these relics remain indomitably intact, obstinate, almost, in their survival.

The isolation is a possible result of the parallel isolation of Cambodia under Pol Pot, who basically shut out the rest of the world while trying to purge Cambodia. While he and the rest of the Khmer Rouge inflicted death on Cambodia’s people and ravaged the country in a genocide that might have continued unimpeded had it not been for some ticked off Vietnamese (who invaded and crushed the Khmer Rouge in less than two weeks), these structures remained unharmed, as they’re relics of the native Khmer past. (Sidenote: During a war, archeologists were permitted to safely continue restoration of the temples. I am not sure if this was during Vietnam or the Khmer Rouge regime within Cambodia.)

Even now, they retain a sense of the old world, preserved by time and location. While other UNESCO World Heritage sites like the Colosseum and the pyramids are protected by scaffolding and law that prohibits visitors from getting too close, the Wats lie open and exposed.

We spent the day scrambling over wobbly rocks and climbing up tree roots and onto the temples themselves. If you’re wondering what Indiana Jones or Lara Croft felt like, go to Angkor Thom. There’s a sense of adventure and discovery in those mossy ruins!

There’s also a sense of profound peace. Here, despite it being a tourist attraction, there are few hawkers, few novelty and souvenir shops. And, because of flight cost and time, and maybe because of the very recent unrest (to put it mildly), tourism is relatively low.

And once you ascend the frighteningly steep steps – wooden if not original – you’re treated to a view that is unparalleled: treetops and the occasional temple poking through.

In one of the temples, we found an open room with windows overlooking three different directions. A woman sat next to a Buddha decked out in vibrant orange. She was smiling and didn’t ask for anything, so I gave her a dollar (after moonwalking around the Buddha, as your feet aren’t supposed to ever point at him). She gave me a red and yellow string bracelet (apparently a kalava, tied on the left wrist of a woman to ward off misfortune) and wished me a happy new year before tying it on my wrist and wishing me luck and good fortune.

It would have been a pristine moment of serenity had a man not offered to take our picture and then followed us asking for money. India all over again. We were exhausted by the time we got to Angkor Wat.

We were drenched in sweat. It was sweltering, unrelenting tropical heat. Our clothes were drenched. It dripped down my knees, over my eyes. My beads of sweat were sweating. I sat in the shade and watched tourists climbing to the third floor. Many a grandmother trekked in and out of the complex, and I was thoroughly impressed.

Back in Siem Reap, we paid $3 to use a shower in a backpacker hostel. It was helpful, but pointless. I left the bathroom covered in a new layer of DEET-flavored sweat.

I could live in Cambodia, minus the bugs. It has unpredictability, urgency, and an overpowering sense of resiliency and optimism. Culture and history are prevalent everywhere and the city itself is flat, sprawling out along the canal, paragon of the word ‘developing.’ The place has personality and strength.

It reminds me of La Paz in some ways: both cities are reeling in transition, springing back and attempting to thrive amidst poverty and economic hardship, but both are so incredibly infused with culture and history and natural splendor.

one of the trees in ta prohm

But at the same time, I feel like a pretentious observer. I’m a tourist who contributes to their growth in tourism, but what can I offer to the country? Words are empty and useless in the face of poverty unless they’re working to combat it.

So we left Cambodia in this mindset and returned to Vietnam and to a large crowd of teenage girls screaming as we exited the airport. Now I know what it feels like to be a Korean pop star (and Indiana Jones). 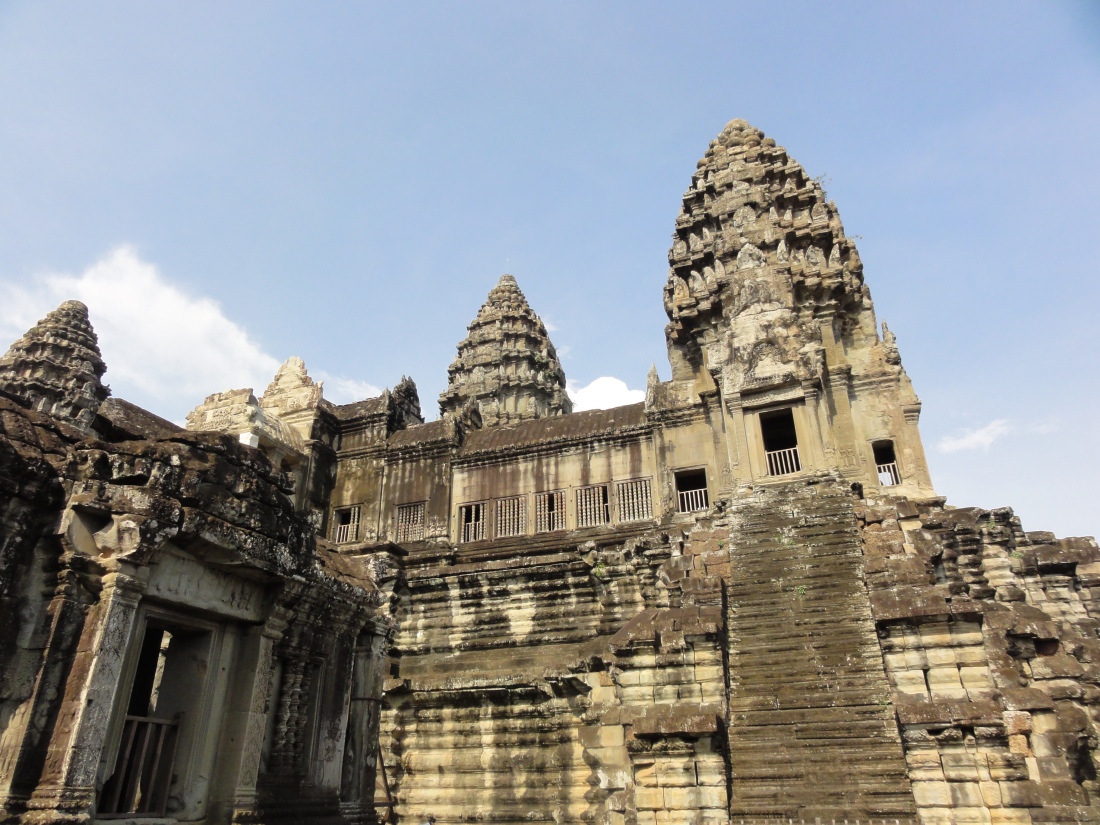