I once read somewhere that rugby is the ultimate team sport; the players are much more than their positions, and it is absolutely impossible to win unless you trust every single one of your teammates to support and do their jobs. And it’s completely true.

There are very few times when sacrificing a good night’s sleep before work is actually worth it. Last night, I got home at 3:30 and, after a terrifying battle with a nasty cockroach in the bathroom that involved me standing on a closed toilet bowl swatting the thing with a squeegee for ten minutes, I fell asleep only to awake two hours later for work.

But it was totally worth it.

Our rugby team ditched the dusty pitches of Cairo for a sevens tournament in Istanbul this weekend, and it reminded me of how fabulous it’s been to find a sport that I’m insanely passionate about – and a team I’m beyond proud to be a part of (partly because they’re skillful, and partly because they’re just so damn cool). When I say I love rugby, I mean I LOVE rugby. This is a sport I enjoy watching and playing, and that’s a rarity for me. (Hate is a really weak verb when it comes to describing my feelings about watching a basketball game. Hell is malls and basketball games.)

Despite this, I was reluctant about going to Turkey for the Sevens tournament with the team mainly because A, there’s a language barrier between me and all the girls who were going and B, my skill level is still pretty low and I didn’t want to disappoint anyone with my pitifully limited knowledge of rules and unhoned skills, but the girls asked me enough that I felt like it might be fun, and I am so glad I went. (To prep, I watched dozens of videos on Youtube, researched rules, and paid Kilian 100% attention during theoretical time at the BCA after practice.)

While most of the team requested off work on Sunday, I (along with my teammate Annie) fully intended on coming back Saturday night and getting to work on time Sunday. But plans change.

We all headed to Turkey brimming with enthusiasm on Thursday after work. We roamed the airport donning fezzes and chucking the rugby ball back and forth at the gate to the dismay of some nearby passengers. We arrived in Istanbul tired but excited and spent the next day putzing around town, still buzzing with excitement but starting to feel the nerves.

On Saturday, we made our debut on the pitch in our cow galabayas (no one seems to know why we wear them, but it’s a Cairo rugby tradition), mooing and confusing the other teams. As it turns out, our mooing and general laissez-faire, fun-loving attitude was a great rouse; the other teams seemed to underestimate us, and we easily won our first two matches of the day.

Keep in mind the fact that the past two weeks had been spent prepping us for a really tough match and preparing us for the very possible chance that we’d lose every match in the tournament, and you can just get a sliver of how incredibly exciting it was for us to win the matches. We faced off against the Turkish national team that afternoon and lost, but it didn’t matter; we landed ourselves in the semi-finals for the next day.

At that point, Annie and I were faced with the decision to go home or to stay, and after much stress and deliberation, we decided to stay with the team. (Who collectively pitched in to help us each pay our airline penalty for the flight change.)

The next morning was all nerves again. We were playing one of the better club teams in the morning, and if we won, we’d meet the Turkish national team again that afternoon in the finals. If we lost, we’d be playing in the “loser’s bracket.” Ten am rolled around and what followed was what I think is the second best match we played all weekend. 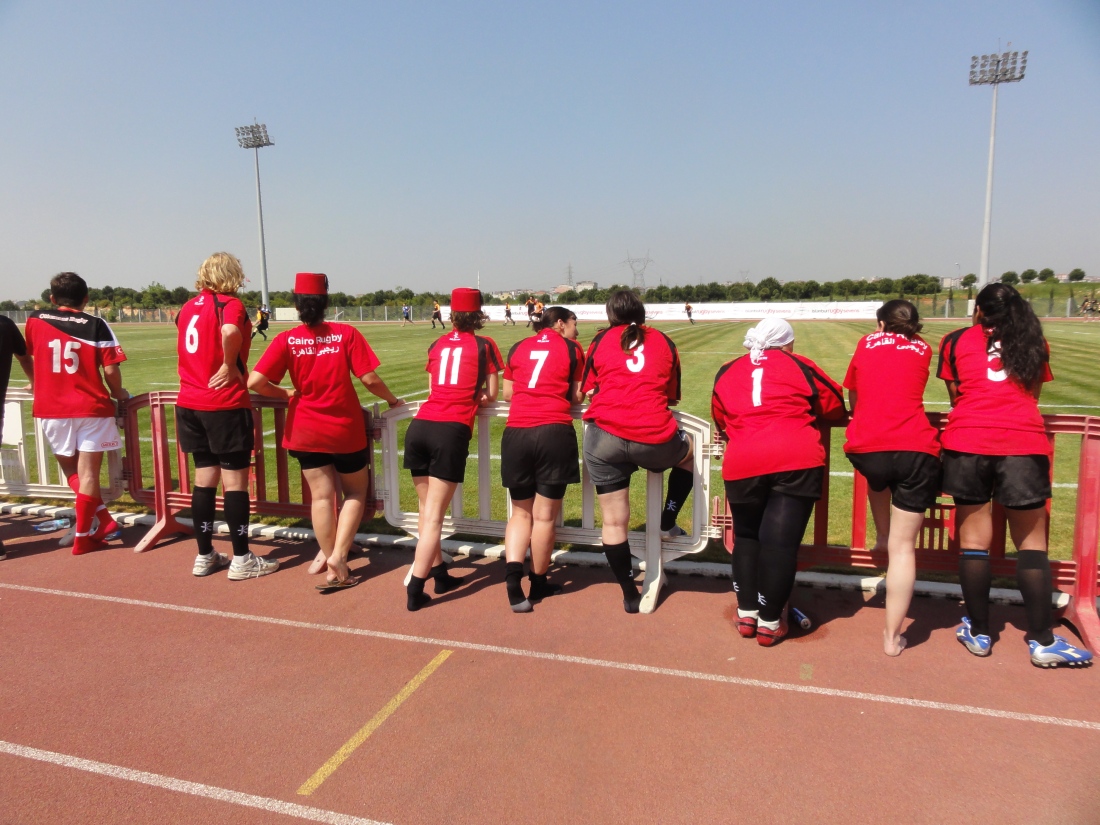 Each seven minute half seemed to speed by, and we were winning up until the very end. No one had converted any tries, so the score was an even 2 – 1 when the opposing team came frighteningly close to scoring a try. I had started the game and was on the sideline by the end of the match, and the anxiety was oppressive. On the bright side, our defense was phenomenal; the opposition was literally a few feet from their try line and every time the ball went into play, the girl was tackled. It was bad luck that they finally scored a try to tie the game. But instead of being over, the ref called extra time: whoever scored the next try won the game.

I can’t describe the mounting anxiety from the sideline. It was the first time I really felt a part of a team, like I actually cared if we won or lost. So when Lydie got the ball and scored the try that won the game, I was beyond ecstatic. I don’t even really remember much except screaming and sprinting onto the field. We’ve won matches before, but nothing even compares to how it felt to win this one.

It was really all we wanted; we knew the Turkish national team would be extremely difficult to beat (they’re way fitter than us), but we wanted the challenge and the dignity of making it into the finals. We played them at the very end of the day and lost, but we’d accumulated a nice amount of fans based on our positive and ridiculous attitudes, and we were all in stellar moods as it was. There was no disappointment (okay, maybe just little disappointment) at the loss, and we all played better than we’ve played all season. And while it’s always nice to come in first, there’s nothing disappointing about placing second against a national team, especially when you know your teammates are the best you could ask for, and you gave it your all. (And you lasted about 20 straight minutes.) 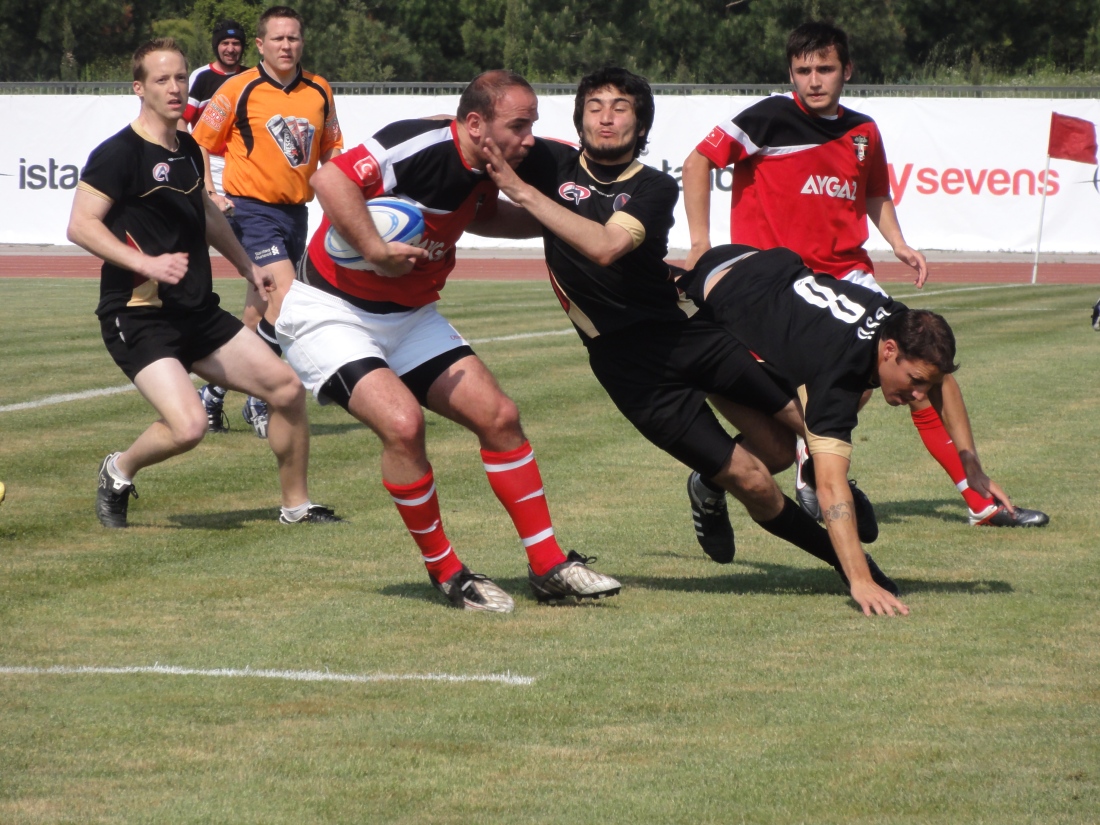 one of the men’s games, featuring two of our coaches

It was our first tournament and our first experience with strict rules and intense physical conditioning. (Those seven minute halves can be killer: 14 minutes to win a game = fierce running, tackling, and quick thinking. Add a blazing sun overhead and three hours in between matches spent avoiding the sun and you get the idea.)

It was a sweaty and difficult weekend, but on the bus ride back to the hostel after finals on Sunday, as we passed around some beers and celebrated, it was completely worth it. The bus driver cranked up some club tunes and we all got out of our seats and danced the entire ride back to the hostel, where we changed and headed out for an hour at the after-party before catching a cab to the airport and barely making our flight back to Cairo.

One of the best parts about the weekend, aside from bonding with the team and engaging in the best rugby I’ve played to date, was finally knowing what it feels like to play as a team. I was so proud watching my teammates score the tries and defend the line and tackle, and I know I gave it my best. Every little thing that each player does contributes to the overall win (kind of like communism), and it feels fantastic.

What’s also fantastic is the shower I’m about to take…and the fact that I made it through today energized solely by unbreakably positive vibes and a sense of accomplishment that makes getting through a day on two hours of sleep seem as easy as tying a shoe.

with the winning men’s team, the ottomans