How to be Sick in the White Desert

I was miserably sick for a good portion of this trip, so much so that at one point I actually apologized to the desert for defacing it.

The White Desert is a beautiful place, the kind that even a painfully ill person can enjoy. I’m not sure how, but I survived our trip to the White Desert despite ailing away under the scorching sun.

We got out to Bahariya late Thursday night, just in time for dinner and bed. The sickness came on quickly, and by the following morning, I wasn’t sure I could do the excursion. The thing about the desert trip is once you leave the town and head out into the desert, you’re out in the desert. There’s no turning back because you’re feeling sick. But I wanted to do it, and I wanted to spend the weekend with some of the coolest people I’ve met in Cairo, so I sucked it up, sucked down some medicine, and headed to breakfast where Simon had me swallow two spoonfuls of salt before drinking a sweet concoction he made.

90% of the treatment was in his total certainty that this would heal me; had he told me to swallow a worm while hopping on one foot, I might have, simply because Simon speaks with such conviction that I honestly believe him.

Regardless, I was feeling a bit better by the time we headed out into the desert. I abstained from sandboarding (opting instead to sit in a hole in the shade that Simon had dug for me) and only hiked halfway up a craggy hill, but I enjoyed the scenery nonetheless. By the time we reached the towering white monoliths that beckon tourists to the White Desert, I was feeling better and completely inspired by it all. Our guide told us that the desert and much of Egypt was probably once at the bottom of the Dead Sea. Evidence can be found in some remote region of the desert called the Valley of the Whales, where whale bones reside, suggesting that yes, this was once an ocean floor. Er, sea floor.

As we do with everything else, we spent the afternoon climbing up and over the rocks, taking photographs, and rejoicing in the profound silence that is miles and miles of desert on either side. And by the time we found the campsite, I was completely overcome by the serenity of it all.

Sarah, Anna, and I watched a bleary sunset while the guides set up our campsite, a slew of blankets tossed over the sand beneath nothing but billions and billions of stars overhead. With twilight came a few desert foxes, the first arousing our curiosity as it trotted happily toward our campsite. 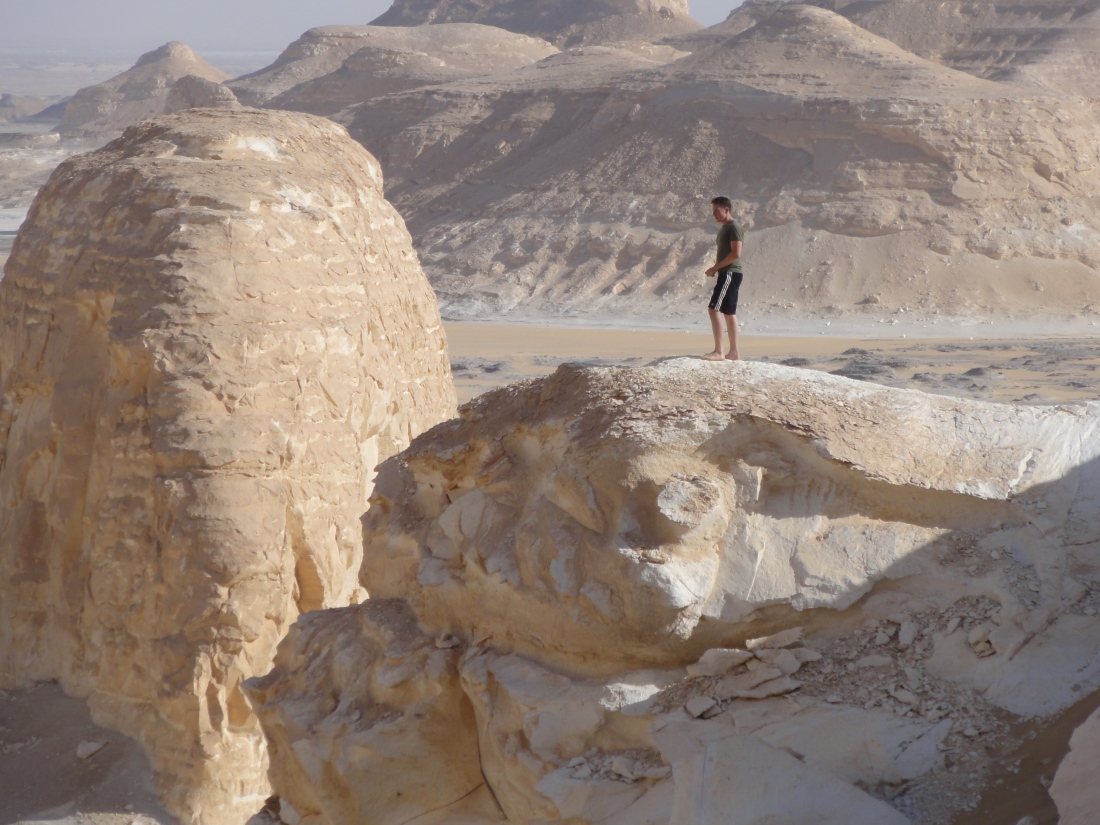 nelson climbing on a rock

sunset in the desert

When it lifted its leg and peed on Will’s bag, the fun was over, and we spent the night trying to ward them off. While our guides cooked dinner, Simon and Nelson dug yet another hole and tossed some mattresses in for Anna and I to join them, and as the stars came out, we lay in the hole and looked up at them, spotting dozens of satellites and the occasional shooting star. For the first time in weeks, I felt peaceful.

We ate, we told ghost stories. And by ‘we’ I mean Simon, who retold his tales of picking up hitchhikers in his strange town in Ireland, my favorite story involving a friend of his who picked up a guy who, upon rounding a bend, broke his silence by saying, “Slow down, this is where I died.” I find this hilarious, because if it were true, where would the conversation have gone from here? What do you say to that?

We went for a little walk and then fell asleep in separate spots around the campsite. I awoke once around 2:30 in the morning to the sound of foxes scampering across the 4 x 4s and dragged my mattress out of the camping area to where many of my friends lie in deep sleep out in the middle of the desert. For the first time in my life, I was seeing the Milky Way, and the most stars I’ve ever seen. When I think of it, the only thing I can compare it to is a planetarium, which is sort of ironic; usually when you compare things, you compare them to nature, because nature is a solid reference point that most people are familiar with. But the night sky has become so clouded with light pollution and pollution in general that the only way people can understand how open and clear it is in the desert is by comparing it to a planetarium, where everything is as it’s supposed to appear.

Anyway, I awoke to the sun and the revelation that no one else had slept all that well, but we’re all good at hiding it. Nelson had the worst night; after throwing rocks at foxes during dinner, he’d fallen asleep on his own and the foxes had sought revenge. He awoke to them peeing on him in the middle of the night.

The next day, we drove around the dunes and took photographs in rocks that looked like fossils before going back to the cold springs we’d dipped in the day before and sipping cold drinks in a little hut.

I didn’t want to leave the desert and its silence and head back to noisy Cairo, but there wasn’t much of a choice. So ended one of the best camping trips I’ve been on with some of the best people I’ve been lucky enough to meet.

towing our car off the hill we got stuck on