There are few people who can say they’ve been stalked by a rhinoceros. This is because a, most people haven’t spent time in the African bush and encountered rhinos and b, some who have did not live to tell about it.

G was dead set on getting us to the Game Reserve before its gates closed at 5 so we might be able to catch a glimpse of a rhino or two. Our van stumbled into the parking lot a few minutes past three and we sat waiting for instructions. We were all expecting a van ride through the park, which played host to seven rhinoceros. So we were all surprised when G gave us the option to walk. We hadn’t explored on foot at all yet. We had traveled through Kruger in the van, which was akin to taking a Greyhound through the Amazon. At this point, we were itching to get our boots dirty with mud and animal droppings.

Truthfully, G did not look thrilled about allowing us to walk for two hours in the bush, potentially encountering rhinos. In fact, he looked downright pained.

“We can walk?” we asked excitedly.

“It says in your itinerary…a “walking” safari,” he repeated with what seemed like chagrin.

I think he had a small aneurysm as seven of us leaped joyfully from the confines of the van, trail maps in hand, practically salivating. He nearly had to yank us back by our collars to keep us from charging straight into the bush like a pack of dogs on a fox hunt.

“If you see the rhinos,” he began, “do not go closer than 100 meters. They have bad eyesight and they’ll think you’re sneaking up on them. When you approach a rhino, make sure you make noise so they know you’re there. I always whistle when I come across a rhino.”

G seemed to be regretting telling us about the walking option, but dutifully continued on.

“If you see a rhino and it becomes aggravated, if it starts flicking its ears or stomping the ground, do not run. Find a tree and get in it.”

This part caused me a momentary fright. I am clumsy and can’t climb trees. I would certainly be trampled. I hesitated, then followed my friends into the bush.

It might seem like a lot to risk in order to spot a rhino, but rhinos are pretty impressive animals you view with a mixture of immense respect and pity. In South Africa, the rhino is a member of the Big Five, which was named for the five most difficult animals to hunt on foot. (The others are the lion, leopard, buffalo, and elephant.)

We had seen a few rhinos previously on a game drive. They’d been wallowing in the mud, rolling about trying to ease their arthritis pains. It was then that I realized that, despite appearing indestructible, rhinos have plights of their own, most far greater than arthritis. Sure, you don’t want to find yourself pitted against a rhino. The rhino will almost always win. Rhinos are equipped with good hearing and an excellent sense of smell, which really puts humans and all other prey at a huge disadvantage. If you’re not being trampled, you’re sure to be impaled by the horn, the very thing that rhinos are hunted for and the reason why, in 10-12 years, certain species may become extinct.

The rhino horn is coveted, mainly on the Asian market, for its supposed ability to improve sexual performance. (Clearly these people have missed the Maximor ads in the Johannesburg bathroom stalls.) Despite attempts to educate consumers about this fallacy, people are still scouring the market for rhino horn and poaching is still a major concern in many African countries.

In fact, poaching has become such a problem that anti-poaching units are permitted to shoot poachers on sight. Unfortunately, this edict applies only to parks like Kruger and not to privately owned game reserves like G—, where rhinos are able to mate and reproduce. Our night game drive at G—- had been canceled for this very reason; poachers often sneak into the park with the aid of an employee and, at night, poach rhinos.

What’s really impressive is South Africa’s dedication to its wildlife and its conservation efforts. The fact that they even have anti-poaching units that are instructed to kill a human to save a rhino is remarkable.

But what options do they have? 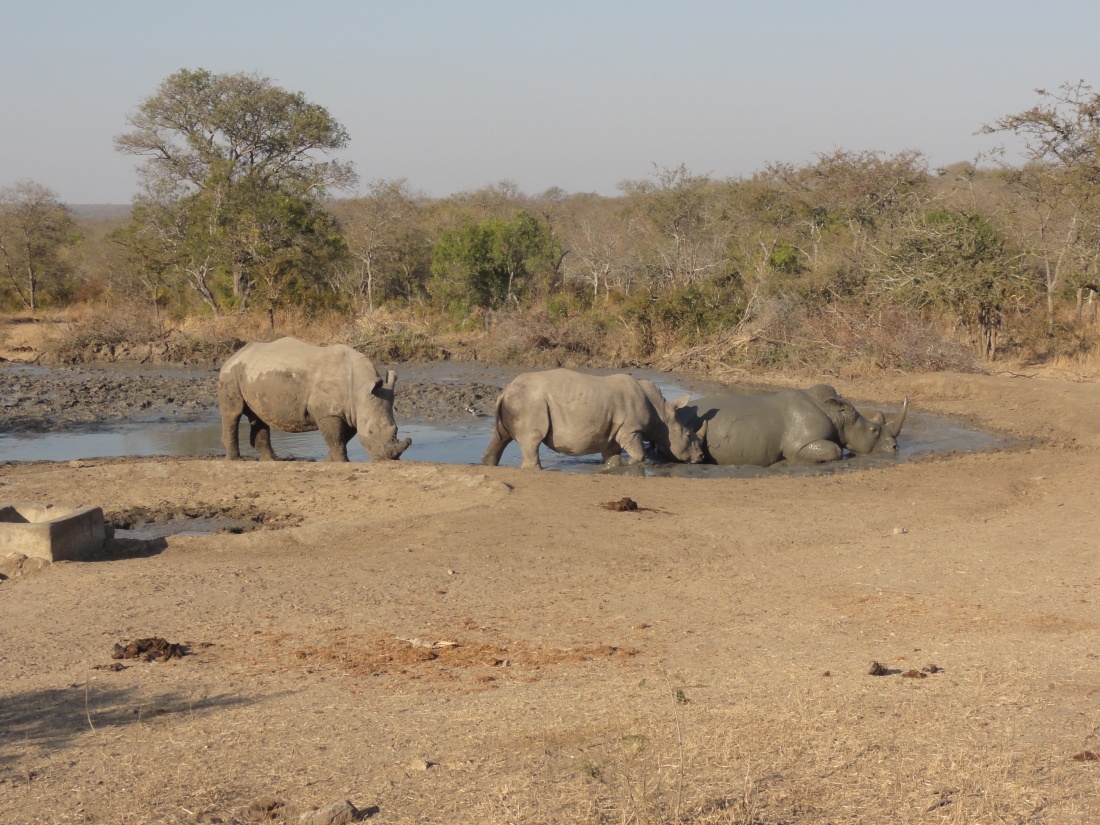 Some effort was spent dehorning rhinos and rereleasing them into the wild but this didn’t work because researchers found that once a rhino’s horn was removed, it would no longer mate. And can you blame it? Talk about emasculating.

“Aren’t rhinos colorblind?” Dave once asked. “Couldn’t you just take, say, an orange cone and get some really strong glue and glue it to the rhino’s nose? It would think it had a horn and would mate.”

“It would realize it wasn’t a horn when it rubs up against a tree and the horn falls off,” G had responded.

“We could get some really strong glue.”

“Besides, rhino horns grow back.”

“OK, so, you get a hollow cone and refit the cone when the horn grows back.”

At least Dave’s suggestion seemed proactive. Many of the anti-poaching initiatives currently in place focus on what happens after the rhino has been poached. For example, one measure involves injecting a harmless dye into the horn that would linger on a poacher’s hand for up to a year after handling the horn. The poacher, if caught, could be sentenced to death. The dye would also help nab poachers by glowing neon pink at the airport scanners, whether the horn remains in one piece or is ground up.

A recent endeavor will result in a more deleterious effect on those benefiting from the poaching of rhinos. Legislation has been passed allowing poison – harmless to the rhino – to be injected into the horn. Anyone purchasing rhino horn for consumption would become ill and/or die. Only Andrew seemed to think this was a bad idea and that more effort should be spent educating both poachers and Asian men who are lacking in the sack, but it’s easy to get behind such radical legislation after seeing photos of dead rhinos, completely intact save for their bloodied noses where their horns once were. (Apparently, the poisoned horns legislation isn’t new. This article published on Discovery’s website in 2011 details the effects of poisoned rhino horn and delineates the measures taken to prevent poaching, which has skyrocketed since 2007.)

All of this played out in my mind as we ventured deeper into the bush. By 4:30, we were convinced that we weren’t going to see any rhinos.

A man who had been decked out in full on camo had stopped us on the path earlier and basically insinuated that we’d scared off all of the animals with our bright clothing, including the rhinos.

“I’ve been all over the park. I haven’t seen any rhinos. But good luck, and next time don’t wear so many colors.”

We ignored his warning and pushed on, stopping for the occasional ant lion hole until we encountered G and the rest of the crew who had seen the rhinos and knew which direction they were coming from.

what obscenely bright clothing you have!

But diligent searching produced no results and we stood idly, deep in the bush, the van out of sight in the road. At this point, our eyes were trained on the enveloping, vermilion sunset. I turned back to Shannon to see if she was watching it. Instead, she was gesturing wildly at me, her eyes wide with excitement. It only meant one thing.

It suddenly seemed prudent to whisper. I hissed at my companions and waved them back, all but galloping through the bush where Shannon, Christie, and Andrew stood.

And there they were.

Six massive ungulates shuffled indifferently through the field. I have no idea how far away they were. It certainly seemed like 100 meters. As soon as we were all breathlessly in sight of them, we began whistling. I don’t blame the bull for freezing and turning in our direction. The sounds we were making came across as desperate bordering on giddy. The bull remained unmoving. 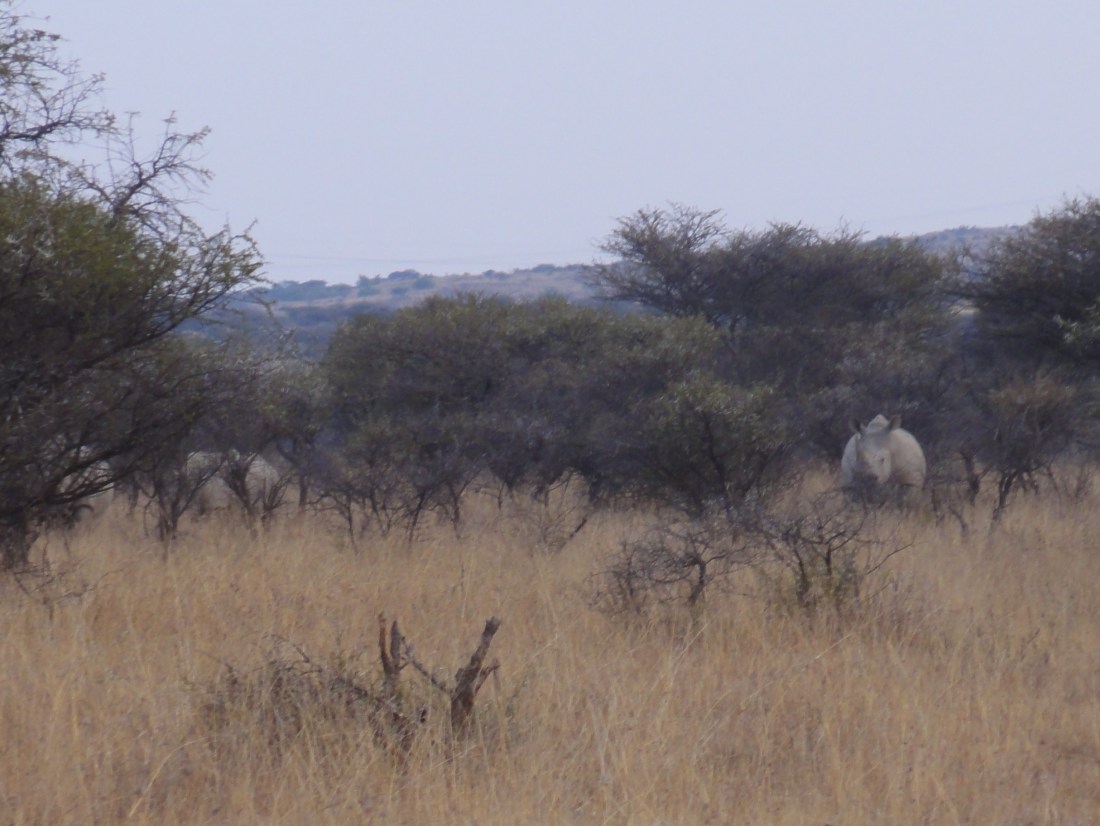 We obeyed, snapping pictures. Then the rhinos began to move toward us.

They were not running or charging, but they were not taking their time. We all stood frozen, rooted to the spot.

G’s voice came low and ominous. He didn’t have to tell me twice. We began backing away. Andrew began to whistle.

Behind us, the rhinos were moving quickly in our direction. We picked up the pace, walking fervently forward. Every muscle in my body ached to burst into a full-on sprint toward the van, so power walking was a difficult concept. Still, I kept it up, constantly scanning the trees, desperately hoping for a scalable one. Each time I passed a chosen tree, I immediately set my sights on a new one.

We stumbled haphazardly into brambles and thorns, laughing nervously and snapping pictures over our shoulders while simultaneously sizing up gnarled trees to climb. They didn’t look promising.

We stopped. The rhinos were now gathered at the spot we’d originally occupied. By the way they were sniffing the earth, it was obvious they were out for blood.

Then they were on the move again, towards us.

“Move!” G said again. The panic in his voice urged me up to the front of the line behind Val and Christie.

By the time we reached the bus, we were panting and invigorated. G followed at the rear, trembling and lighting a cigarette.

“No, that was not awesome. You don’t follow directions, do you? I say move, and you move!”

Maybe it doesn’t sound scary at all. Six rhinos on an evening power walk doesn’t sound remotely threatening. But when you’re knee deep in the bush, your van out of sight, and six behemoth rhinos are headed your way, you feel just a little bit shaky.

We spent the remainder of the cold evening retelling the tale, each version more spectacular than the last. Talk about bonding.

We’re thinking this could be a great teambuilding exercise for corporate staff.

a beautiful afternoon for rhino scouting