“Our campsite and lodge are unfenced; all animals roam freely which means you can expect to see anything. Always bring a good torch or headlamp with you if you do not want to bump into a browsing giant on your way to the bathroom.” – The Elephant Sands website

By the time we reached Botswana, where Shannon and I would spend a regrettably short amount of time, it seemed as though life could not get any better. Four nights pitching our tents beneath the sprawling firmament of the southern hemisphere, waking in the middle of the night to the occasional lion roaring or hippo grunting, rendered every other sleeping arrangement despicably unimpressive. (A snug bed in a five-start hotel doesn’t hold a candle to a sleeping bag on a patch of grass in Sub-Saharan Africa.)

We had spent the entire day driving and were itching to get out of the van and stretch our legs. Hours upon hours of car ride were punctuated with the occasional conversation and eventually a riveting game of ‘Hey Cow!’, which involves players sticking their heads out the windows and shouting at cows, gaining points based on how many heads turn. It wasn’t surprising that, as our van approached Elephant Sands, we were all suffering from an almost loopy lethargy. 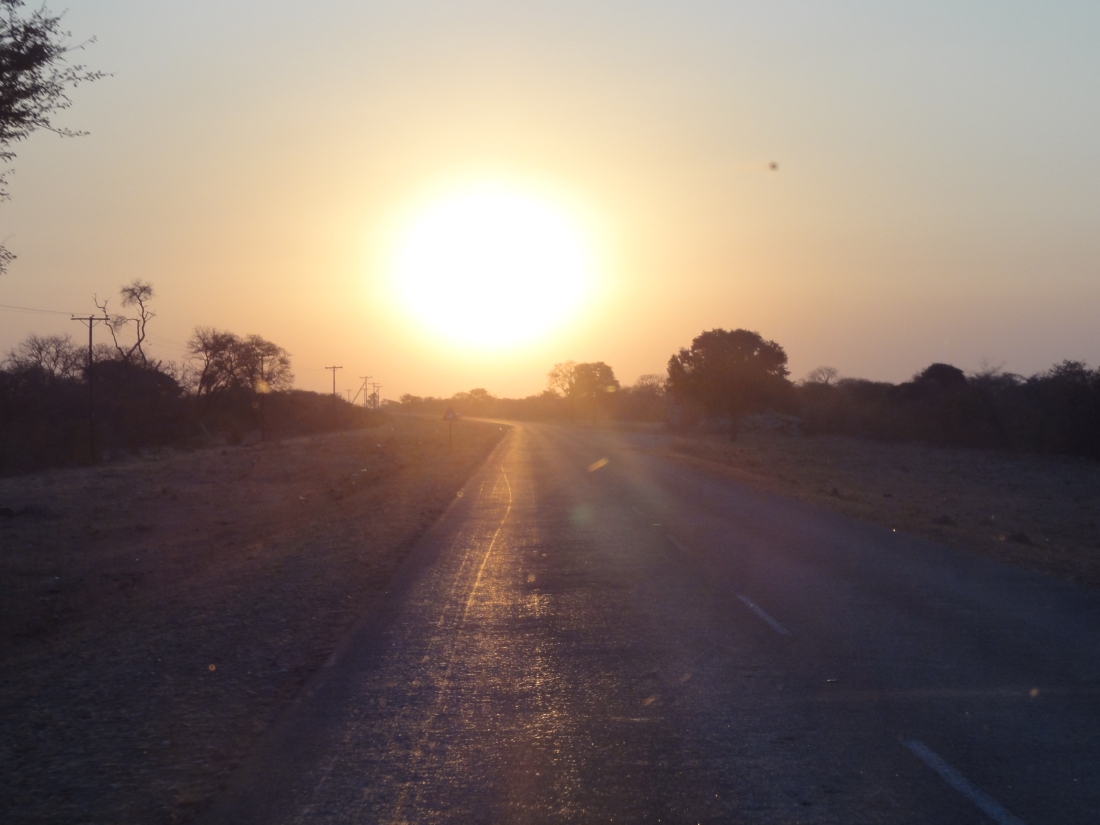 G graciously allowed us to eat immediately instead of pitching our tents, so we headed straight for the buffet – and were stopped in our tracks.

There, standing at the watering hole, was a massive bull African elephant. It casually extended its trunk into the water and filled its mouth noisily, barely regarding the row of spectators that had lined up along the wall. I was beside myself. Whatever heavy lethargy had been weighing on me instantly slipped off and was replaced by sheer euphoria.

Everyone stood equally captivated, gawking at this elephant, the buffet completely forgotten. A few meters away from the bull, the dry trees rustled and another elephant emerged slowly, its trunk swaying lightly with each slow step. The bull at the watering hole halted and flared his ears. The approaching elephant stood still until the bull resumed drinking. It cautiously approached and joined the bull, guzzling water from the hole.

A bit dark, but two elephants at the watering hole

It truly was a remarkable thing to watch, this strange and silent communication between elephants. We all know that elephants are intelligent creatures with emotional capabilities that distinguish them from other animals. They have incredible memories, with some suggesting that they can even recognize and remember the sound of deceased members of the herd. But what’s especially nifty about these pachyderms is that there are still myriad elements of elephant behavior that remain a mystery.

For example, elephants have been known to locate water sources they have never previously visited. Scientists are not exactly sure how they are able to find these sources, though they speculate that they can smell it.

They can also retrace ancient migratory patterns that they have never completed on their own. In 2003, the fence securing the border between South Africa and Mozambique – running through Kruger and Mozambique’s Limpopo National Park – was taken down. This opened up space for the park’s wildlife and enabled elephants to resume their old migration routes. The fascinating thing about this is that a significant number of elephants hadn’t completed the route in the past; the knowledge of the routes was passed down by older generations.

Elephants can communicate through their feet. I’ll let that sink in.

So imagine all of this information – much of it related earlier by G, our wildlife guru – swirling around in your head while you watch these magnificent animals interacting just meters in front of you, separated by a knee-high stone wall. It’s dizzyingly blissful.

Now, G had asked us in the van if we wanted to try and rally at 3:30 in the morning to get to Victoria Falls with enough time to actually see the falls the following afternoon, and we’d excitedly agreed. By the time we had eaten, it was a little after 9, and Shannon had a brilliant idea.

There was a toasty fire pit just beside the little wall overlooking the elephant watering hole. There was also a bar at the lodge. Shannon decided to shun the tent and hang out by the fire all night, and I was quick to join her.

“You can’t sleep there,” G told us when Shannon suggested it.

“We know. We’re just going to sit up and watch the elephants.”

G watched us wearily as we dragged our things down to the fire. (I think sometimes he regarded us as a father might his impetuous teenage daughters.) We threw some wet clothes – we’d attempted to wash them in the sink the night before – over the back of a chair, cozied into some seats, and cracked some beers. And so began the coolest night of our safari.

We lucked out with some enviable company. The manager of the lodge, Roan, and his friend Andre had been sitting there to begin with and, despite having to wake up early the next morning, remained with us until 3:30. Dave, with his infectious enthusiasm, joined us as well.

Roan kept the drinks coming all night, and the two South Africans regaled us with tales of leopards at the lodge, lions at the watering hole, and elephants. Elephants brushing Andre’s tent at 2 in the morning, elephants climbing over the wall to drink out of the pool, elephants gorging on sweet water until Roan closed the pumps. We couldn’t get enough. They were hilarious and, not only did they know tons about elephants, they were passionate about elephants. They loved them.

Where we spent the night.

Roan explained how there was currently a drought in Botswana and he traveled 20 km every morning to get liters upon liters of sweet water for the elephants to drink. He also told us about culling. Apparently, the elephant population is so big that it’s causing overcrowding. Let me give you an idea of just how big it is. In 1995, South Africa – and also Botswana, I believe – prohibited culling. The elephant population was down to about 8,000. In 2008, culling was reintroduced because in the decade between, the population soared to 20,000. One source even suggests that if culling hadn’t been introduced in the years between 1967 and 1994, the elephant population would be at 80,000 today. It’s a hefty figure.

It’s a difficult situation. No one wants to see elephants being killed, but overcrowding would have devastating effects as well.

“But who could shoot something like that, ay?” Roan said, nodding to a bull that had emerged from the darkness.

At midnight, they shut off the power and we sat enveloped in darkness around the glowing fire. We passed hours this way, curled up in our chairs around the campfire beneath a starry Botswanan sky, listening for the shuffle of elephants at the watering hole.

By two, we were all feeling buzzed. Roan had shut off the pump and the elephants were gone. We heartily sang the South African national anthem and a slew of rugby songs, pausing only to notice a herd of kudu that had gathered around the watering hole in the distance.

When G retrieved us at 3:30 in the morning, we were all quite confident that this was, by far, the best night we’d had the entire trip. Still buzzing from the excitement of it all, we stumbled to the van and enjoyed four hours of sleep before reaching Victoria Falls. 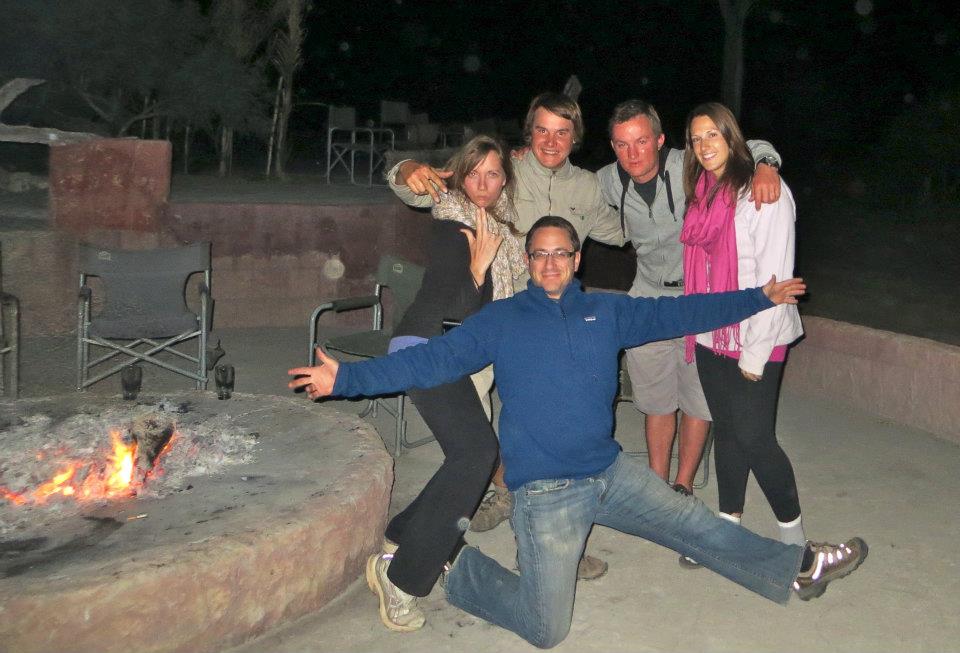