Much like people, countries often come with reputations. Argentina lays claim to thick steaks and sultry Malbecs, while Ireland is supposedly home to emerald hills, potatoes, and Guinness. Denmark’s reputation may at first appear unremarkable; fishing villages come to mind, perhaps, or the perpetually sea-sprayed Little Mermaid statue. But Denmark boasts a number of impressive accomplishments: Hans Christian Andersen, Vikings, some of the happiest people on earth, and the notable rescue of its Jewish population during World War II. All this from a country often lost among its stocky Nordic neighbors.

An hour’s flight from Berlin, Copenhagen was open to exploration. On a rainy Sunday morning long before sunrise, Susannah and I loaded our bicycles with luggage and began the twenty-five minute journey to the subway station. (While public transportation is mostly reliable and efficient in Germany, living over an hour from the city in a forest village out of a Grimm fairy tale limits your transport options.) Spurred on by the cold and a plausible fear of the wild pigs that called the forest home, we pedaled quickly out of the woods, through Zehlendorf, and to the subway station. After a lengthy subway, bus, plane connection, we found ourselves in the rainy city of Copenhagen.

Despite its small size, it was startlingly easy to get lost in Copenhagen. My internal compass has been broken for years, and Susannah’s lack of sleep impeded her ability to read a map or navigate our whereabouts, leading us on a circular journey around Nihavyn in the rain. Nevertheless, we persisted. As we perused shops and menu prices, it immediately became clear that Denmark was expensive. The Danish kronor made the euro look like a glorified Egyptian pound.

A subway ride in Egypt is a pound, which is equivalent to about 15 cents. In Germany, an ABC card for public transport is 3.20 euro, about $4. A subway ride in Denmark? 35 DKK, or $7. $7!! Stumbling out of the cold street and into a hygge* café was an equally expensive endeavor: a sandwich and coffee ran us about 85 DKK – $17.

In addition to its high prices, Denmark also charged for everything. WiFi wasn’t free, bicycle parking came with a cost, and it was sometimes necessary to pay to use a toilet. By the time we made it to the Viking exhibit and the man asked if I’d like to try on chainmail, I thought it was perfectly reasonable to ask if it was free. 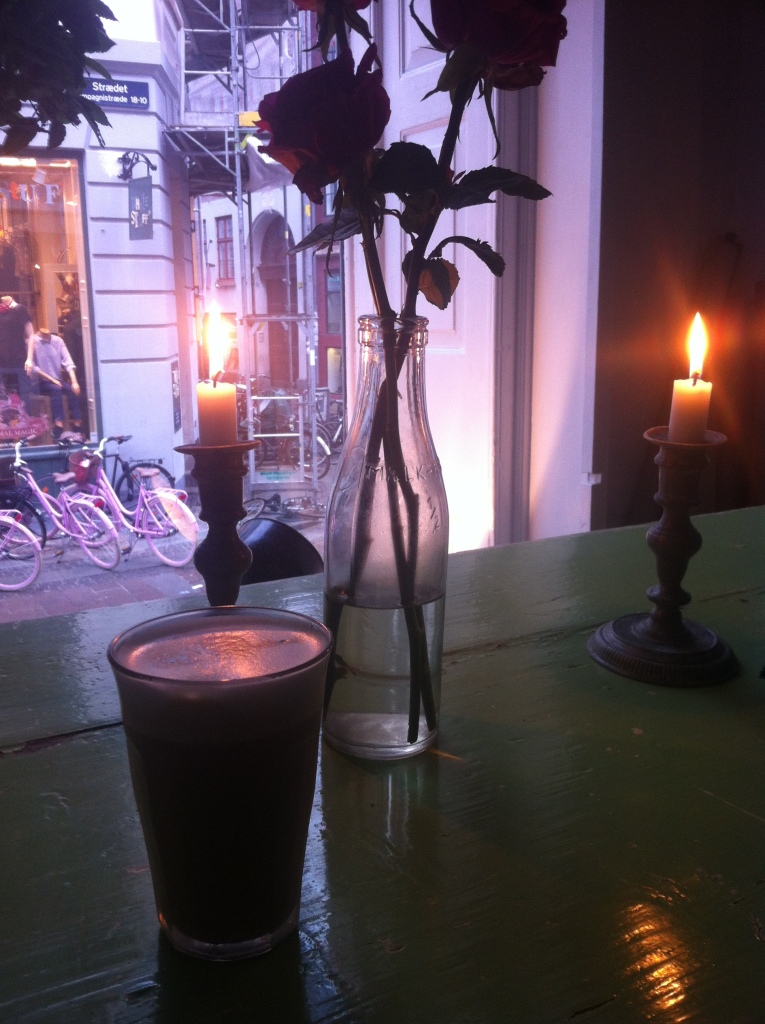 At this rate, we’d be begging for food along the canals by the end of the night. Of course, this might not have been too poor of a plan. One of Denmark’s many admirable qualities is its reputation for amicability and hospitality. These are a people who, back when a latrine-man passed door to door collecting pails of feces, thoughtfully began leaving shots of Schnapps at their doorsteps as a way to say, “We are sorry your job is crappy. A drink on us.”

A century or so later, Denmark once again proved its amiable resourcefulness to the world when, during World War II, it demonstrated one of the most successful resistance movements in Europe. Denmark was occupied by the Nazis during World War II, but being home to a population of people who were paragons of Hitler’s Aryan race, they were mostly left alone. In time, though, relations between Danish police and Nazi soldiers became strained. Soon, the “Jewish question” reached Denmark. Orders were given to round up Danish Jews, as well as hundreds of Jewish refugees from continental Europe who had found safety in Denmark. Overnight, word spread. This led to a massive resistance from what seems to be the majority of Denmark’s population. Danish police refused to cooperate with Nazi soldiers; they would deny the Nazis entrance to homes where Jews were hidden or would pretend to carry out extensive searches, returning empty-handed.

But it wasn’t just the police who pushed back. Denmark’s advantageous coastlines and fishing outposts made smuggling by sea an easy feat; citizens worked together to hide Jewish families on fishing boats and safely transport them to neutral territory in Sweden. An admirable accomplishment, to say the least.

From getting the latrine-man drunk to saving its own people, Denmark was decidedly earning my vote in a country congeniality contest. Everyone seemed eager to be helpful, if only to compensate for the high prices. This was especially evident one night when Susannah and I became lost trying to find Kalasat, a quaint Swedish restaurant, and a bearded Danish man overheard our woes and happily pointed us/walked us in the correct direction.

A lovely church at sunset

By the end of our journey to Denmark, it was obvious that friendliness was a major factor in why the Danes are considered some of the happiest people in the world. But friendliness alone did not cancel out the cost of living, which certainly could not be a factor in happiness. So why are the Danes so content?

They are all ridiculously, inconceivably good-looking.

Everywhere we went, we found ourselves among droves of bewilderingly attractive men: handsome, scruffy men walking dogs, juggling lattes while riding bicycles to work, pushing prams, jogging through parks by the sea. All of these men appeared to have been the product of a brawny, outdoors magazine and some fair-haired, Nordic goddess. Unfortunately for us, the women were just as beautiful. But it is obvious to see what’s so cheery about the place. Who can be unhappy when everyone is so good-looking?

There are plenty of sights to see in Copenhagen, like the pumpkin-shaped opera house, Hans Christian Andersen’s café-home (that is now, romantically, a McDonalds), or the drowned corpses of bicycles in canals, reminders of drunken evenings out.

By the end of the trip, Susannah and I had run out of places to visit and, more importantly, money. Digging deep into coat pockets and dark purse corners, searching for kronor, we regretted not budgeting more appropriately for our trip. Still, it was worth it. Copenhagen belongs on everyone’s list of places to go, if not only for its inviting, hygge atmosphere. And you can’t put a price on hygge.

*Hygge (pronounced HUGH-guh-lee) is a uniquely Danish word meaning cozy. Our tour guide, Bruno, defined it in this way: Imagine you are in a warm cabin in the mountains with people you love. There’s a fire in the fireplace and outside, it begins to snow. You look out the window at the snow and see a double rainbow. That feeling is hygge. Wikipedia defines it as “relaxing with good friends or loved ones, often while enjoying good food and something to drink or creating a more friendly atmosphere by lighting a few candles. Christmas time, when loved ones sit close together on a cold rainy night, is a true moment of hygge, as is grilling a pølse (Danish sausage) and drinking a beer on a long summer evening.”

walking around the city at night 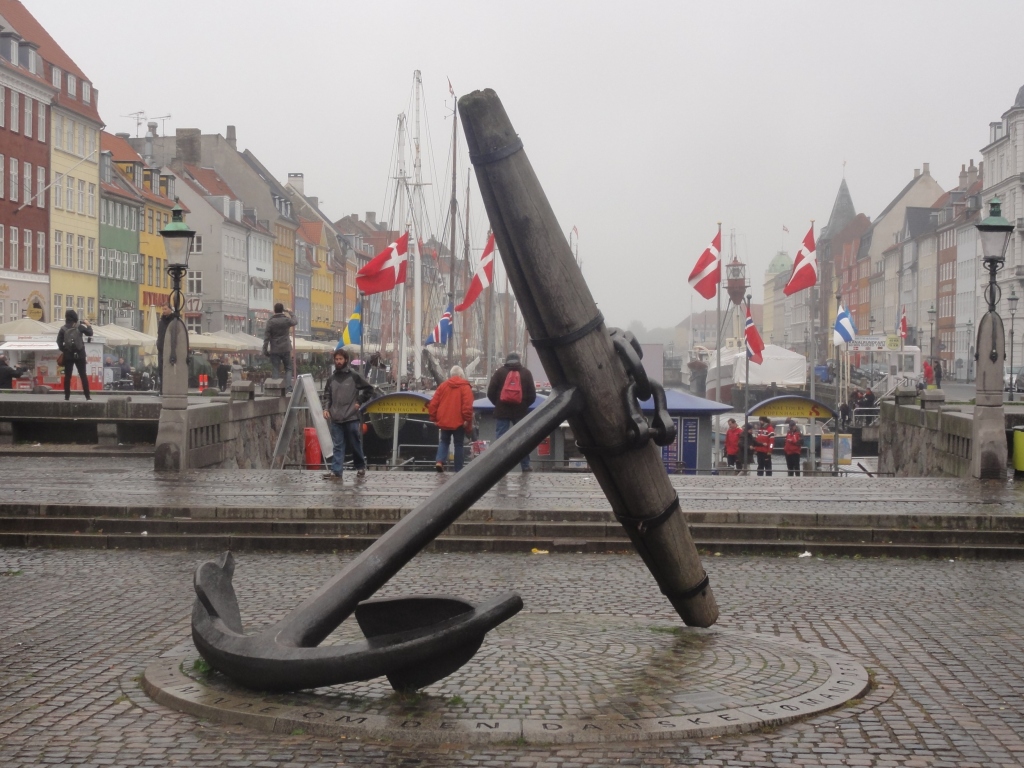