Malmo or Bust (or not)

By nightfall, most of my Danish kronor had mysteriously vanished. Susannah and I had done nothing but meander aimlessly about town in the rain, yet somehow, my pockets were starved. Slightly panicked, Susannah had sensibly turned to her budgeting app and meticulously mapped out a tight spending plan for the rest of the trip.

“I can do one for you if you want,” she offered.

This was generous, but futile. For me, budgeting only goes as far as optimistically marking envelopes with various categories and neatly stacking currency inside, organizing the envelope as one might organize a cash till. I’ll promise myself to only spend 100 LE on groceries per week, but then I’ll have a phenomenal cooking revelation involving tuna steaks and out-of-season avocados and shell out another fifty. The delivery man will arrive panting after climbing four flights of stairs, so I’ll give him an extra twenty for his efforts.  At this, he’ll be wonderfully surprised and thrilled, so I’ll be sure to do it again next time. And somehow, I find myself drawing from my cab fund to compensate for my depleted grocery budget. So while I begin with the best of intentions, my budget is really more of a Potemkin Village; it looks great on the outside, but that’s about it.

Nevertheless, I allowed Susannah to budget my spending for the rest of the evening. The two of us would split a meal of nachos for dinner. No beer. No bottled water. I marched downstairs, confident I could adhere to Susannah’s budget. (After all, her app had colorful little folders that could be proud-of-you green or a very disappointed red.)

One might reckon that I should’ve stayed in the room to avoid temptation, but I had volunteered to research methods of getting to Sweden the next morning and the hostel’s spotty WiFi connection was only available in the common area, which inconveniently happened to be next to the bar.

“I don’t have enough for a beer,” I told myself firmly.

This resolve lasted a full minute before my brain conveniently rephrased the thought: “You don’t have enough for a beer…today. But if you take some money out of tomorrow’s fund, you can buy a pint right now. Who needs breakfast anyway?”

Twenty minutes later, I found myself happily sipping a beer while Googling methods of crossing the Øresund Bridge into Malmö, Sweden. Clearly, one method of cutting costs would have been to eliminate our spontaneous trip to Sweden altogether; the trip to Malmö would cost $40 USD in transportation alone, not to mention meals or emergencies or the possibility that Sweden, too, would charge to use the toilets. But Susannah and I share the philosophy that, when traveling, it is essential to see ALL the things*, so Malmö was a must. (For all we knew, Malmö was a decrepit fishing village with a clapboard café and bait shop, but it was in Sweden, which was all that mattered.)

With increasing dismay, I compared the cost of a bus with the cost of the train. Perhaps we could save two dollars, or maybe it was possible to ride the train without purchasing a ticket. No one had been monitoring the metro, and I’d done it once in Athens. Would it be possible?

It was then that another alternative presented itself, in the form of a barely-discernible Finnish man named Ville. Feigning serious interest in my iPhone, I listened with mounting excitement as Ville detailed his journey throughout Scandinavia to a hip New Yorker at the table next to me.

“Excuse me,” I interjected during a brief lull. “Did you say you were in Malmö last night?”

“And how did you say you came to Copenhagen?”

“Of course,” he went on. “Everyone does it here. You know, Denmark is the safest place in the world.”

“And you? You’ve done it as well?” I asked the New Yorker.

“Oh, no. But it seems cool. It’s something I’ve always wanted to do.”

Her name was Sonovia, which inspired images of desert spas in Arizona and a practical footwear company interchangeably. She, too, was hoping to visit Malmö the next day. I tried to fend off encroaching mental pictures of Susannah and I staked out on a roadside holding ragged slabs of cardboard, but it was too late. The seed had been planted.

Not only was Ville’s Scandinavian adventure more appealing in the adrenaline department, it was also enviable financially, as Ville had left Finland kronor-less.

“You’re traveling without any money?” I asked him incredulously.

“Here? This is the most expensive place I’ve ever been!”

“Yes, but the people are kind. I just tell them my story and they help me out.” He pulled his backpack from the floor and withdrew a bag of bread. “Just as I arrived from Malmö this morning, I came to a Danish bakery. I told them my story, how I did not have any money, and they gave me this bread.”

A look of longing passed across his face then, as he added, “But it is just bread. There is no butter, no cheese. But…it is okay.” (It should be mentioned that while it had no butter or cheese, it had copious amounts of cold cuts.)

“And where will you stay tonight?” I pressed.

“I don’t know. Perhaps I will couch surf again.”

In awe, I steered the conversation back toward hitchhiking. In little over a minute, I had become enamored with the idea of bumming a ride with some Swedish stranger across the bridge, pensively penning my thoughts on the back of an old box flap whose front predictably read “Malmö or Bust”. Ville whipped out his phone and eagerly showed Sonovia and me hitchwiki.org, a website dedicated to marking popular hitchhiking spots on a virtual map. Users could click a pinned location and read a brief testimony of someone who’d been picked up there: where they were headed, how long they’d had to wait, whether they were male or female or single or in a group, how long it took to reach the intended destination.

“For me it can be difficult, because I am male,” Ville explained. “And sometimes you have to wait. But it is worth it.”

Invigorated, I decided to cross-check Ville’s information by inquiring at the front desk:

“What’s the best way to get to Malmö?”

I was sold. As I joyously ran up the stairs toward our room, I convinced myself that Susannah would immediately consent, that she would be thrilled I had found a way around our tight budget, that others had agreed it was a safe method of travel. After all, Susannah had been pursuing a similar option entitled blablacar.com, a website that sounded like diet hitchhiking to me. People planning on taking road trips – whether across Europe or across the Øresund – post information regarding seat space, trip origin/route/destination, and departure/arrival dates. Travelers en route to similar destinations can message the driver in hopes of sharing a ride in exchange for petrol money. Hitchhiking, I reasoned, except you get to meet your driving buddy via internet before the trip. (Drivers apparently get ratings, too, so you’ll know if they’re especially leery or have a dangerous lead foot.)

When I told her my plan, Susannah was not amused. (She was also fairly paralyzed with lethargy.)

“Ville said everyone does it, and the guy at the desk said so, too,” I argued.

“Yeah, but they’re both guys,” she stressed.

“Well, what if that girl Sonovia wants to come with us?” I asked. “Then there’d be three of us. We’ll be safe. We can stop at the 711 on the corner and buy a glass Coke bottle and smash it and one of us can carry it in our purse in case the driver gets creepy.”

There was a long pause.

Overjoyed, I flew back downstairs and proposed the idea. Sonovia was on board, and we decided to meet at 8:30 the following morning in the lobby. The man at reception gave me a map and marked the best places to hitchhike. Sonovia and I poured over the map and planned out a subway route while Ville removed some bread from the bag for his dinner.

I could barely sleep that night. Not only were we going to Sweden, we were hitchhiking. For real. Not hopping into a truck bed in Egypt or Jordan, but literally standing on the side of the road with a sign, thumbs bent, jagged Coke bottle in purse. I remembered my mom telling me about her own hitchhiking stories back when “times were different” and she and her friend would hatch similar emergency plans before thumbing rides around New Jersey. (She would be so proud!)

At 8:30 the next morning, we waited in reception, my enthusiasm unmatched by Susannah. Even though she was willing, she hadn’t seemed especially keen. As the minutes ticked by and the lobby remained empty, I slowly realized that Sonovia wasn’t coming. She’d been excited, but she’d also admitted she was an avid partier. I could picture her now, passed out in her room, ruining my dreams of hitchhiking with her hangover.

We waited twenty minutes before giving up and taking to the streets to find the bus depot. It took some time for me to get over the fact that we would be taking boring, expensive transportation over to Sweden. It didn’t help that, upon our arrival, we set a strict budget of 90 Swedish kronor – 45 each – to last the day. This we spent at a barn-museum on a soup and pancake lunch that secretly allowed free refills but didn’t inform us.

Despite all of this, our trip to Sweden was lovely: cold and sunny and resplendent with autumn foliage. We may have been broke, but the parks were free and full of fall, and Susannah felt bad enough for my disappointment that she adjusted my budget so I could have a pumpkin latte before returning to the hostel.

And if all else failed, we figured we could just tell people our story and get free sandwiches. 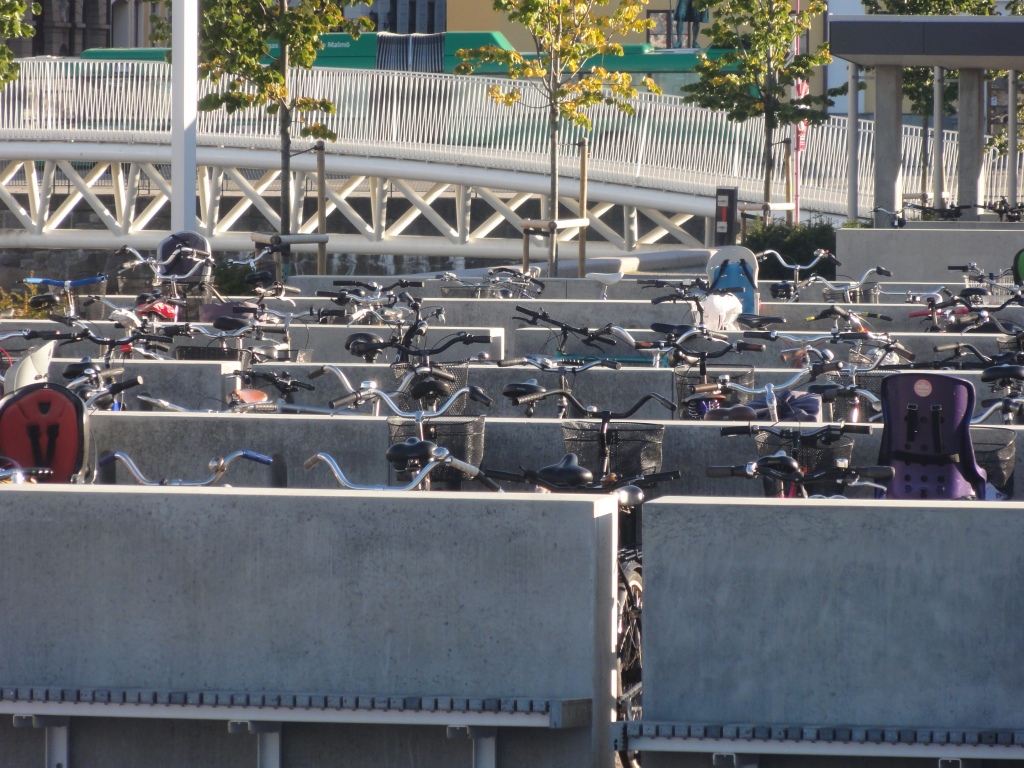 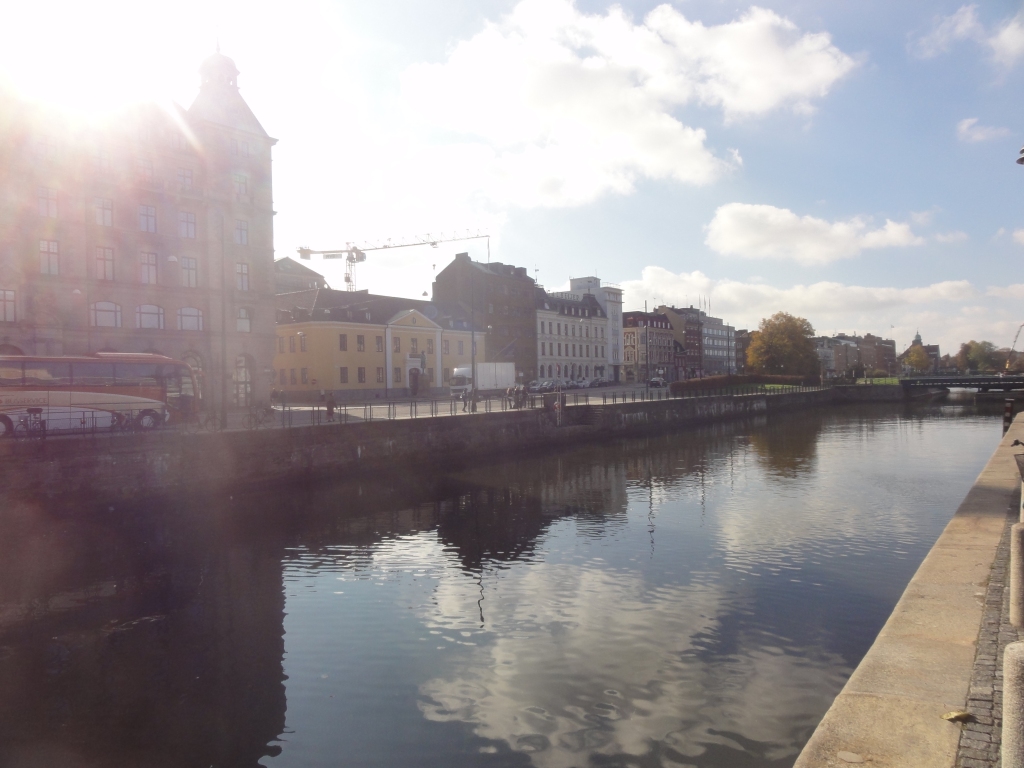 *All the things – a nod to blogger Allie Brosh : )