Kakslauttanen offers a slew of wintery excursions, as any arctic resort should. If you’re keen to enjoy the snow, Kakslauttanen provides a number of activities to do just that – and they aren’t cheap. For the zealous adventurer, activities can be combined in any number of permutations: arctic safari, for example, can be done by reindeer, husky, or snowmobile in morning or evening, for just over 100 euro a trip. Aurora hunting also allows travelers to choose how they wish to see the northern lights: in the company of dogs, reindeer, or machine. None of this is cheap.

Luckily, if you’re just visiting for a few days in the quiet, untamed arctic, you don’t need to spend loads of euro.

Over breakfast, Jamie and I perused the activities sheet for the cheapest option, which turned out to be renting snowshoes. At just 18 euro, this was the only activity that did not require me to sell a kidney to afford. What’s also fortunate is that snowshoeing can be done at one’s own pace, and both Jamie and I enjoy a bit of solitude. There’s something about tour groups and gimmick that hollows out the whole experience for me. (My dad will get a kick out of that. I bet he’s thinking about tubing on the Delaware.) I’ve become somewhat curmudgeonly in my old age in that I prefer intimate company and solitude to keeping up with large groups of yammering tourists. (I would, however, have eagerly joined strangers in the smoke sauna and a jump in the frigid lake, another expensive excursion that required a minimum of 8 willing participants.)

Decided, we left breakfast, my coat pockets bulging with ham and turkey from the breakfast buffet. (Sandwiches, as you must have suspected by now, were also not cheap.)

The first thing you should know about snowshoes is they do not look like tennis rackets. Designed to disperse weight and allow the wearer to walk on the snow, they looked more like diving flippers and felt as cumbersome. Each step involved a complicated process of lifting the foot high into the air and plodding it down heavily and carefully, so as not to kick yourself in the shin. (I failed at this.) I imagine this is what the woolly mammoths felt like when encumbered in tar pits. Here I thought the shoes would make me graceful, like Tolkein’s lightfooted elves, but no.

Additionally, we found ourselves sinking deep into snowdrifts anyway. We took a path across the street that led into a quiet wood, silent save for the distant howl of expensive huskies on safari. Above us, the white-grey sky promised snow. Finnish pines stood dignified and heavy with snow as we gallumphed deeper into the unblemished wilderness. Where Iceland’s beauty is raw and confronting, Finland’s is in its frozen forests, sylvan and still.

“I think he said not to go too deep,” Jamie said at one point, the sound of huskies getting closer.

“I thought he said we shouldn’t go off the path because we’d sink deep…” I paused for a moment. “Do you think there are wolves out here?”

“Probably. But it’s okay, because I have you to feed to them.”

At this, I turned to face the trees ahead and caught a blur of grey. My first thoughts were of me being mangled by wolves and meeting an early demise in the Finnish arctic while Jamie stumbled his way back to a main road. Then I saw the antlers.

I could only see one at first, but slowly I noticed more of them appearing on the ridgeline above me. Hoping for a better shot, I abandoned the path for untouched snowy drifts and – finally! I was walking on top of the snow. I wasn’t sure what was more exciting, the reindeer or finally getting the hang of the snowshoes.

We waited around until the reindeer trooped off and then, still convinced we were being trailed by wolves, we made our way back to the cabin. I could’ve roamed for hours – Finland’s version of cold is actually not so cold at all, partially because it’s quite dry – but we were both hungry. The sandwiches made with nicked deli meats and bread from the buffet hit the spot without hitting the wallet, which made the afternoon that much better. 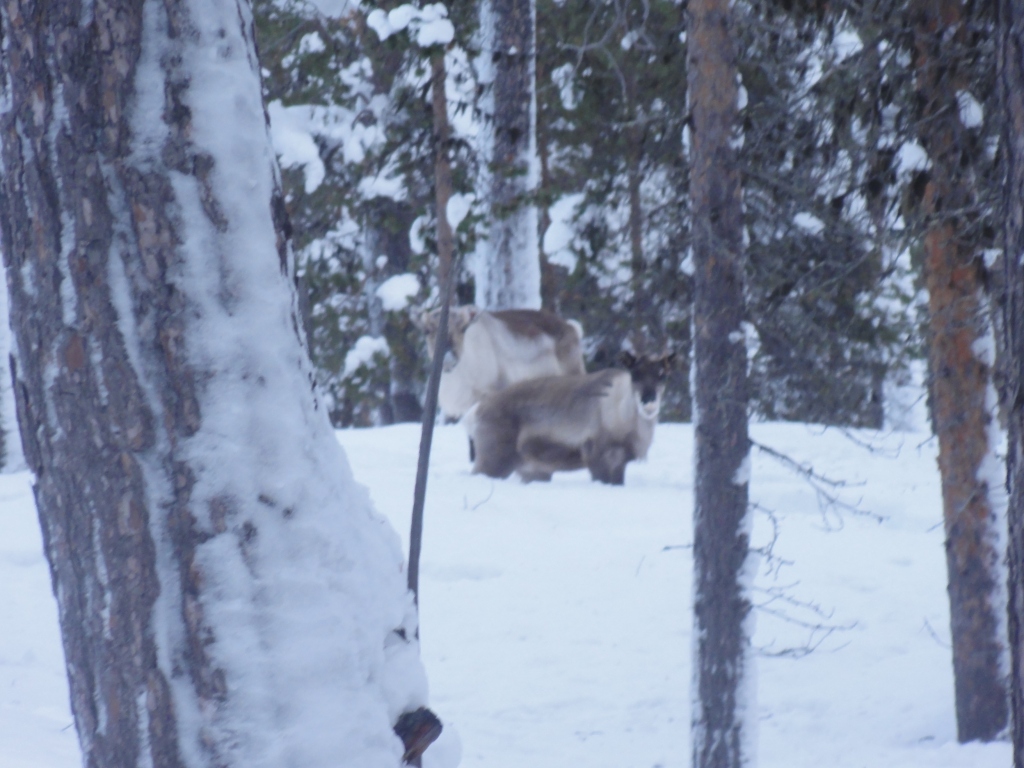 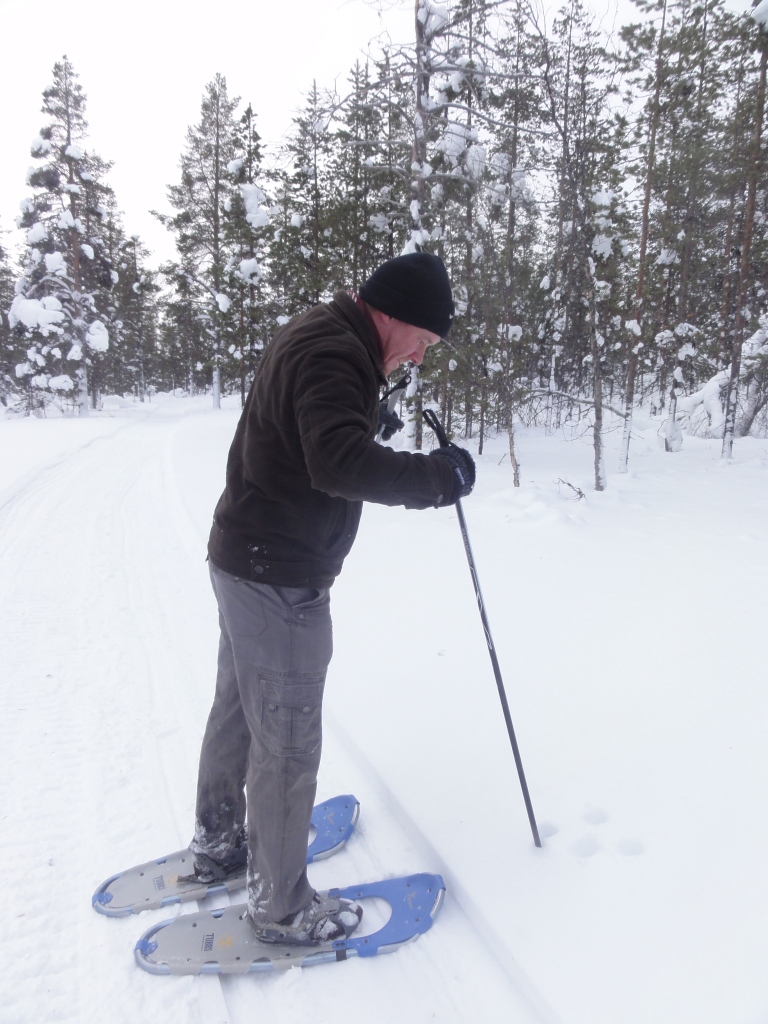 Jamie, straying from the path