Planes, Queues, Buses, and Pubs: Surviving London on the 4th of July

London will always have a special place in my heart as a welcoming city that has provided me with pubs and good friends on each of the six visits I’ve paid to it. This particular trip was not off to a phenomenal start. At Newark, I discovered that the flight I was on at 7:30pm was overbooked. Standing at the gate felt more like the tube at rush hour, with disgruntled passengers squashed in a great crush in what felt like a holding pen. I noticed that United was asking for volunteers to take the later flight, which departed at 9pm, in exchange for a $300 travel voucher. With no real plans the following day, I decided I would volunteer.

I managed to push my way through the throng of people to the desk, where I waited behind an elderly couple who was just finishing up. As they left, I approached with a calm smile and said, “Hi, I’d like to – ”

And then I was pushed aside by a woman who had rushed up from the back of the line, breathless, and wedged herself in front of me.

“Hi, I want to volunteer for the later flight,” she told the woman. I was aghast.

I waited. What I should have done was channel my inner Katniss Everdeen and scream, “I VOLUNTEER!” What I did do was wait to see what the desk attendant would do.

“No more volunteers,” she told me, and then turned to the woman who had cut me. “$700 travel voucher and upgrade to Economy Plus.”

Since there is no word for being divested of your feminine parts, I have to resort to saying that this is what I think emasculation must feel like. I retreated back to the periphery and mentally berated myself for being so spineless and unassertive. This could have lasted the duration of the flight, but I decided about ten minutes into the scolding that it was best to let it go. Money is only paper.

I made it to Heathrow, where my fears of arriving at the Premier Inn too early were abated by the fact that England treats its non-English visitors with great care and suspicion. I’m surprised there isn’t a delousing station somewhere after immigration. Our queue looped and folded back on itself like a great sea serpent. Every minute, we would shuffle forward a few centimeters, and then wait. Heathrow employees patrolled the borders of our queue, scrutinizing us and, most probably, assessing our queuing ability. Queuing is so important to the Brits, I wonder if the UK citizenship test includes questions on how to do it properly. I imagine eager citizens-to-be scratching their heads and wondering what the difference is between queuing at a bank and queuing for the London Eye. (The London Eye queue breaks in order to let people walking on the promenade through, which means it is entirely based on faith that no one will enter the queue from the promenade.) 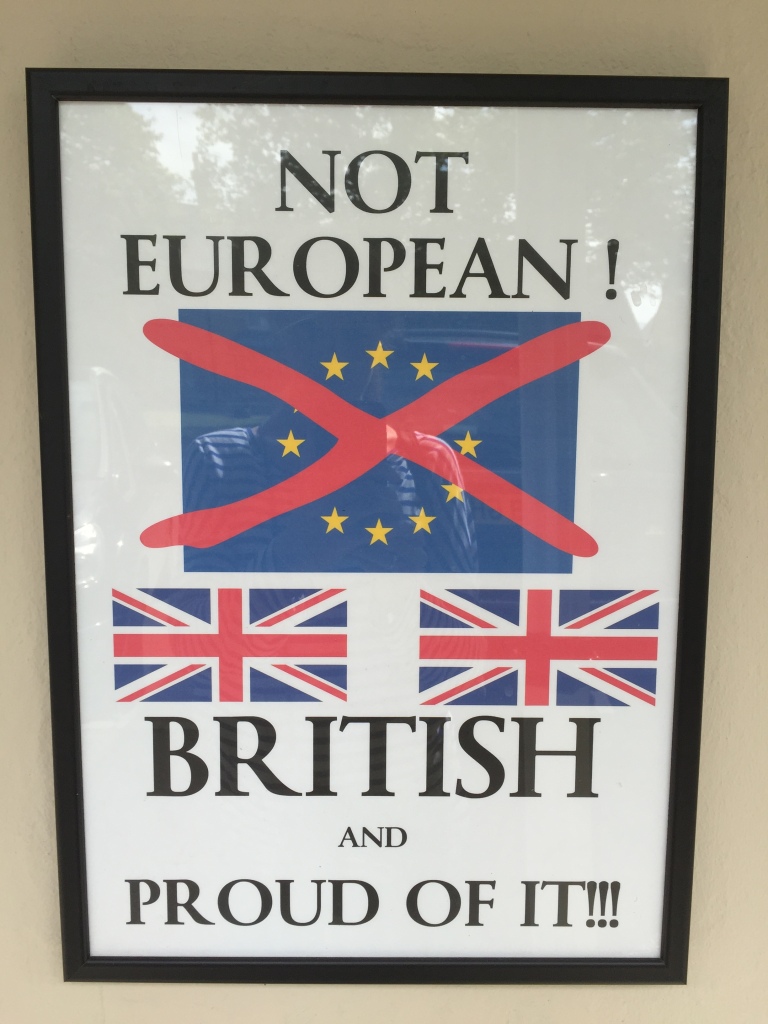 Sums up the English mentality.

Once through, I took the shuttle for 9 quid to the Bath Road Premier Inn, which was all I could afford on this trip. No matter. A Premier Inn is a Premier Inn. This is why I love them so much. You always know what you’re going to get: a sleepy looking chamber with purple decor, a deep bath tub, a flat screen TV, and an all-you-can-eat English breakfast that will leave you comatose.

I sipped cappuccino at Costa while chatting to friends on my new iPhone and waiting for my room to be available. Once it was, I crawled under the covers and slept soundly until 4, when I journaled and journeyed downstairs for dinner. It was the perfect night to catch up on winks and soak in the bath tub while 27 Dresses played on the TV. I’ll tell you this. I’m going to miss the Premier Inn. I don’t think it’s so farfetched to assume that I may return to England at Christmas just to stay in one.

The next day, I had planned on taking the train to Stratford-upon-Avon to meet with David and deliver his laptop, which he’d purchased and shipped in the US. From our work desks in Egypt, the trip looked perfect: a 2/2.5 hour train journey from London to Stratford, a wander around Shakespeare’s town sans students, The Merchant of Venice, train back to London.

Of course, when I inquired about the trains and buses, both took at least 3 hours, which completely nixed that plan. Plan B was to ship the laptop to David, which I thought might be easy enough to do from the Arrivals terminal at Heathrow. You know where this is going. It involves me speedwalking around Terminal 2 Arrivals, asking for a post office, and being sent to Terminal 3 or 4 (I can’t even remember anymore), where there actually was a post office, but they did not supply adequate packaging for a laptop.

“But it’s so small,” I pleaded, holding it up in one hand for effect.

In the end, I returned to the Premier Inn, having failed at my task. I’d have to mail it from the Cotswolds.

What did turn out well was that at this point, my friend Kim messaged me to say she and her boyfriend and their friends were going to have a few pints at Hereford Arms on Gloucester Road. I hadn’t seen Kim since a year after we’d left college, even though she lived in New York and I New Jersey. Now, over five years later, I could meet her in London. It has a certain WOW factor, but this is what London is to me: a crossroads where I’ve met up with dozens of friends. Whether I’ve said good-bye to someone in Egypt, Argentina, or the US, I know I’ll find them again in London. I always do.

It was with this in mind that I caught the 105 bus from the Premier Inn back to Heathrow, hopping onto the Piccadilly Line into town. We sipped beers at the pub and I met her friends. I’d only been there 15 minutes when Matt texted me to say he had an extra ticket to Wicked, which was just down the road. It was painfully tempting. I wanted to see a play about new chapters in life, though I knew I’d cry at “For Good.” But I hadn’t seen Kim in years, so I hung around with her instead, wandering around Prince Albert Hall to muse at a model Delorian. 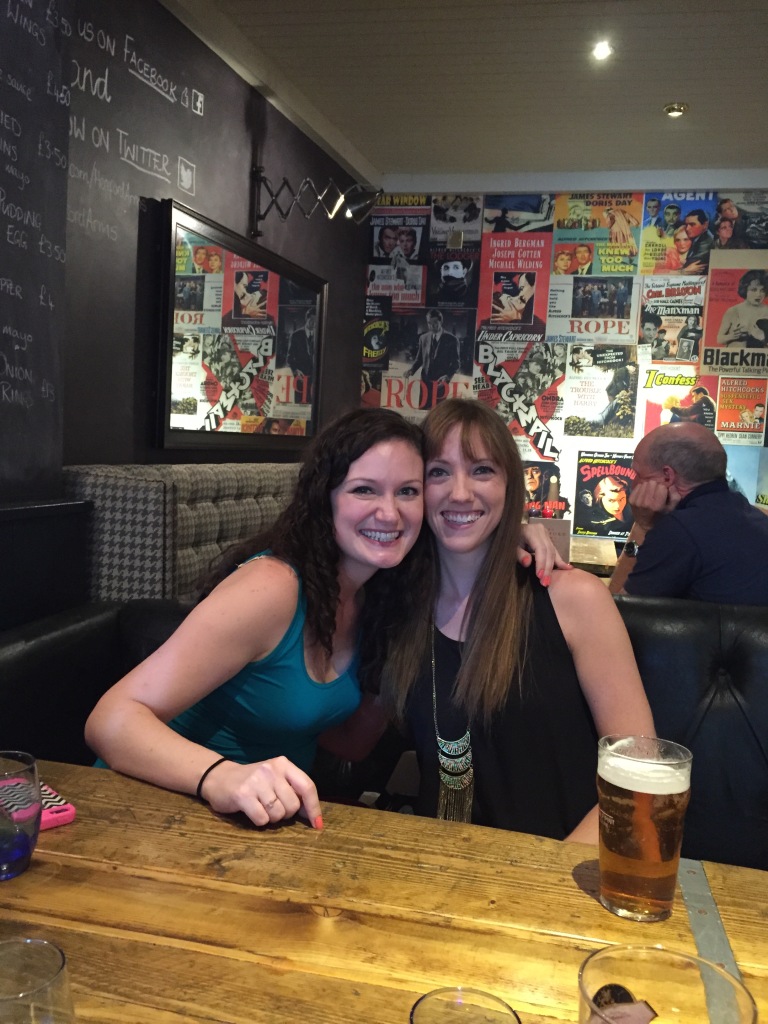 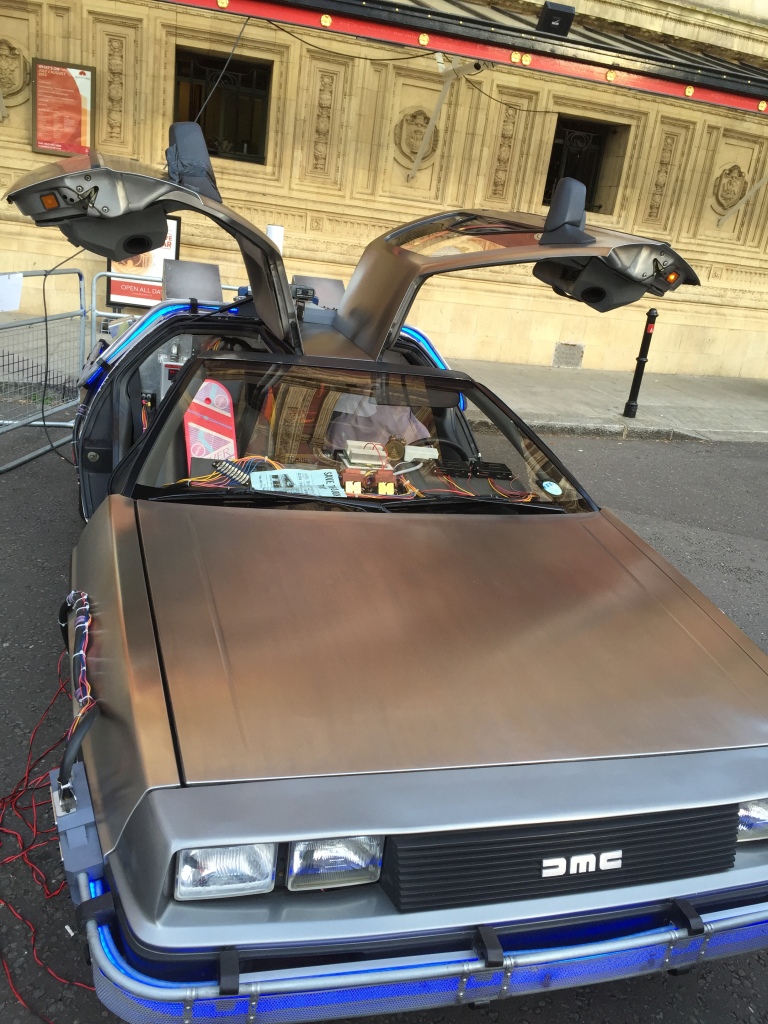 Back to the Future…at Royal Albert Hall

At 8, I caught the tube from Leicester Square to Covent Garden, where I easily navigated the streets to La Tasca, where Claire and Sido were waiting. I hadn’t seen Sido since Luxembourg back in January, and I hadn’t properly said good-bye to Claire in Egypt, so food and drinks were warranted. We ended up at Punch and Judy, where Matt met us after Wicked. In the end, Matt, me, and Claire’s friend Eugene stumbled around London singing Wicked – OK, Eugene did not participate in this, but kindly took photos – until 1am.

Here’s one area where London is unkind. London’s tube is efficient – when it’s running. And it is not running at 1am. Eugene got me on a night bus – no shrunken head dangling from the rearview, unfortunately – where I was promised safe passage back to the Premier Inn.

At 3am, the bus reached its final destination at Hounslow West, a very dodgy station where a few individuals swayed in the night. The street was littered with rolling beer bottles and at least one passed out gentleman.

“When is the next bus coming to Bath Road?” I asked, panic-stricken.

“Five minutes,” replied the bus driver before abandoning me to London’s grit. I wandered around the station – really more of a vacant sidewalk – and past drunk people slogging something out of paper bags. People kept telling me that the bus would come if I just waited. It sounded like something you hear before a serial killer creeps out of the shadows with an ax handle.

At 3:30, a bus did pull up, and I practically flung myself through the doorway. At nearly 4, I saw the glimmering purple beacon that was the Premier Inn. Just as I thought the night was over, I heard a cry from the top deck of the bus.

“Oi, driver!” A large woman clambered down the steps as he pulled to a halt at the Premier Inn. “You’re a bus driver! Drive the bloody bus! Go back to wherever you’re from!”

Of course she was getting off at my stop. I quietly slipped off after her and fell grateful into my bed – after showering the grime off of me. London had been full on: reunions with friends, rowdy pubs, seedy bus rides. I loved it, but I was ready for the next trip that would take me out of London and into England’s more quaint countryside. 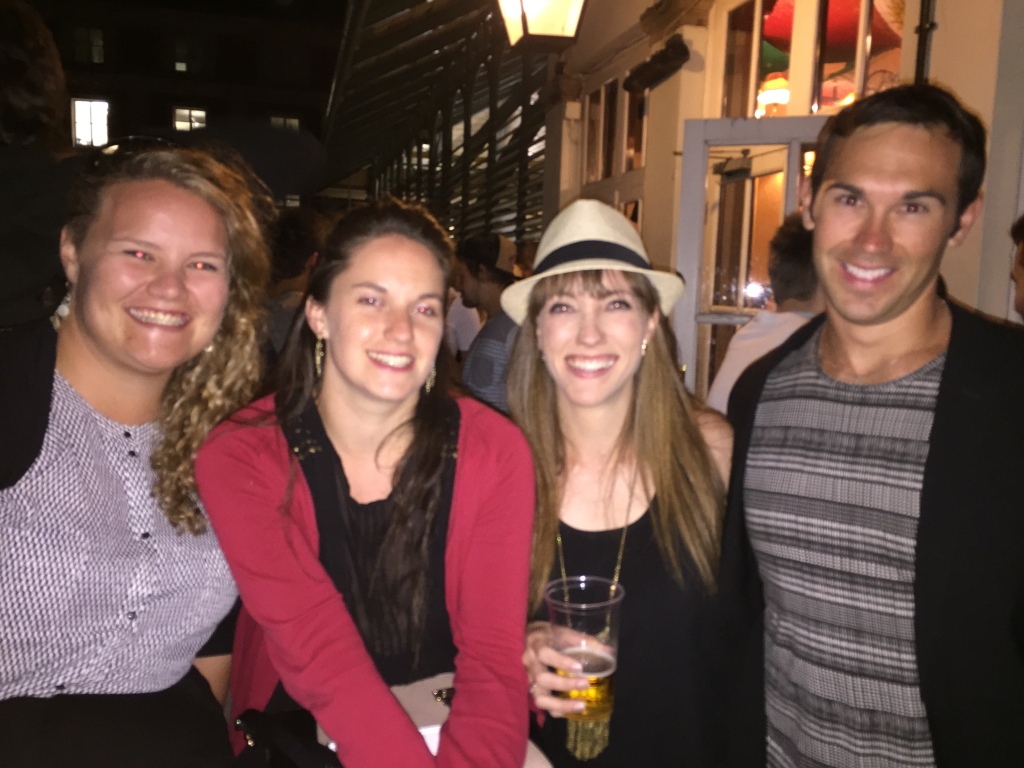 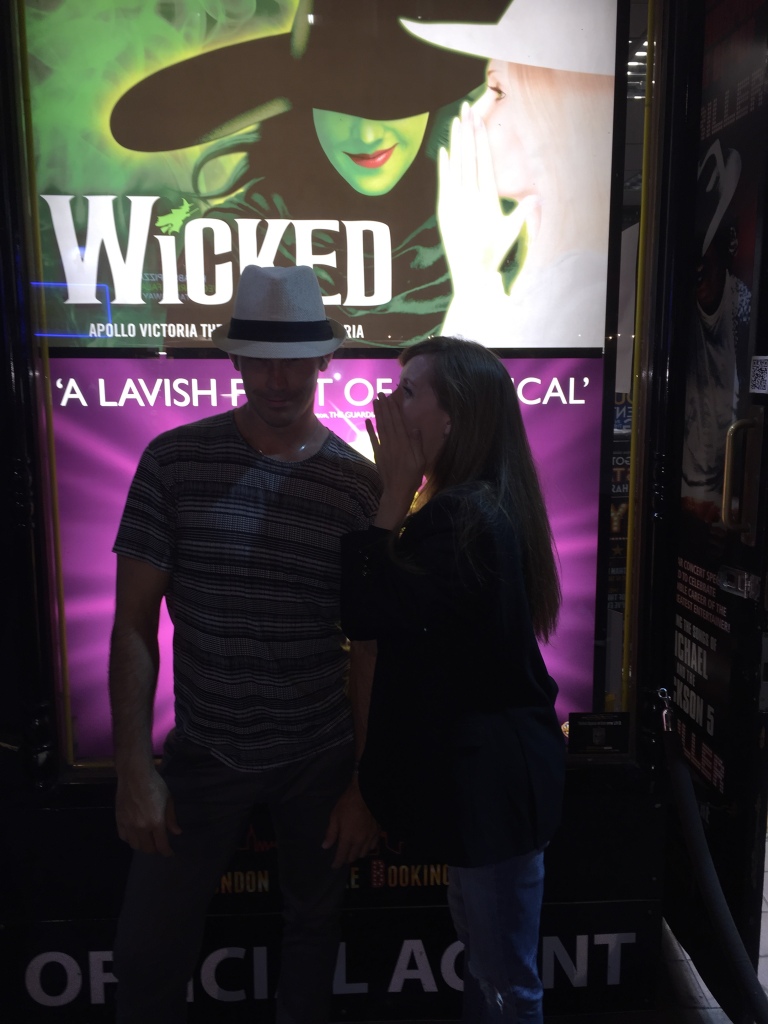 An exact replica of the poster behind us.