The Heart of England in the Cotswolds

I awoke in high spirits on July 5 for a few reasons: 1) There was a Premier Inn breakfast waiting downstairs, 2) Jamie was arriving today and 3) We were off to the Cotswolds! (And 3b, I miraculously made it home safely.)

The plan was this: meet Jamie at Heathrow, pick up the rental car, and drive into the countryside! What made this plan even better was the fact that Ian had messaged me the day before to tell me that he, too, was in the Cotswolds.

“I didn’t realize that this town was part of the Cotswolds,” he’d written.

If you’re not familiar with the Cotswolds or why anyone would want to go there, let me enlighten you. Picture England. Not London, but England. If you’re like me, you pictured rolling hills, grey skies and gentle mizzle, and crumbling villages built around lush greens and dim pubs. This is the Cotswolds. This is the setting for old detective shows like Morse, where tiny Oxfordian villages are home to more homicides than they are cows.

Ian’s texts and photographs were only fueling this image.

“Today we entered a duck race,” he wrote, “and we did tin can shooting.” He also won laundry detergent in a tombola, he said. I couldn’t wait to get there.

I plugged the location into GoogleMaps on my phone before setting out for Heathrow, where Jamie and I made our way to the Enterprise shuttle. I don’t have a lot of experience renting cars – apart from a decidedly negative one at Sixt in Beirut and a very positive one with Sixt in Larnaca – but this was something else. So I have to write about it.

We were greeted by a smiling blonde woman as we got out of the shuttle, and she escorted us to the desk. Two employees introduced themselves before asking Jamie about his T-shirt design and engaging in some friendly football banter. The entire transaction was genial, from the credit card to finding the car itself. I’ve seriously never experienced such friendly service at a car rental before. I half-expected to look in the rearview mirror and see the whole team waving us off with big smiles.

As much as I love London, I was happy to leave it behind. In about an hour, we were exiting the motorway and navigating winding roads around tight curves. Jamie was extremely patient with my navigational skills. A typical moment in the car might have looked like this:

*Laughter over something funny*

Me: Oh…I think you were supposed to turn back there.

Me: Okay, our turn is…oh, it’s that right there. The one you’re passing. Sorry.

To his credit, Jamie calmly turned the car around, even if it meant driving back and forth down one particular road three times. This road was cluttered with cyclists, which made it worse – no one likes riding close to cyclists on narrow, practically one-lane roads.

This warranted a stop at Sturdy’s Castle, a random pub/restaurant/inn that cropped up on the roadside. Fortunately, they had WiFi, and I was able to update the route on GoogleMaps. By the time we got to the White Hart Royal in Moreton-in-Marsh, the clouds had parted to admit streams of silver and gold.

The White Hart Royal is located at a T-intersection, and is basically an old building that surrounds a courtyard and boasts creaking staircases. Our room was on the very top floor, down strangely-angled corridors.

“It’s a little uneven and crooked,” the woman at reception told us as she led the way. “But after a few glasses of wine, it will all straighten out.”

I loved it immediately.

Our room was perfect, with a small bathroom and a window in the bedroom overlooking a wide street below where the market set up on Tuesdays.

We weren’t there long, though. Ian was a town over in Bourton-on-the-Water, and a quick tap into GoogleMaps showed us we had a seven-minute drive before us.

A sunny afternoon. We were lucky with weather on this trip

As we drove along sylvan roads with dripping trees, we passed signs for other lonely Cotswolds villages, all christened with the quaintest of names: Stow-on-the-Wold, Bourton-on-the-Water, Stratford-upon-Avon (“upon,” a much daintier preposition bestowed to the Bard’s town), Moreton-in-Marsh, Shipton-under-Wychwood. Of course, all of the quaintness of these places only serves to contrast the rather curious names of two other Cotswolds areas, Upper and Lower Slaughter. There’s something for everyone in the Cotswolds.

Ian’s family had rented a spacious little cottage right on the edge of Bourton-on-the-Water, and we were invited in to meet his parents and see the place before setting out on foot around the town.

“It’s so different today,” Ian told us as we walked. “Yesterday it was all busy with families having picnics, duck races, games…now there’s no one around.”

I liked it that way. I had my new camera and dallied behind Ian and Jamie to photograph everything from stone gates overtaken with vines to disgruntled-looking ducks bobbing in a very shallow waterway. We ate at an English pub where I opted for the steak and ale pie and we sipped some Cotswolds Lager before continuing to walk around the town.

Because there isn’t a lot going on in the Cotswolds, there isn’t much to do but walk, and I liked it. There’s something to be said about wandering aimlessly around a sleepy town just before sunset, bellies full of ale and English food. It’s a strange kind of peace.

Jamie and I left to head back to Moreton, passing Ian’s parents on the road out of town, walking hand-in-hand. Back in Moreton-in-Marsh, we had a pint at a very strange pub right on Moreton’s titular marsh, a diminutive-looking pond that floated a single duck. The atmosphere of the pub was pretty stifled, with lots of regulars stationed around bar stools and booths, regarding us warily.

Luckily, another pub was situated just down the road, and it offered British staples such as darts, English pool, and pub quiz machines. This is what I had been looking for, and when the pub closed, we enjoyed a short but pleasant walk back to the hotel through the quiet little village. It was a completely different scene from last night’s frightening bus journey and London’s pubs, and it was exactly what I was looking for. 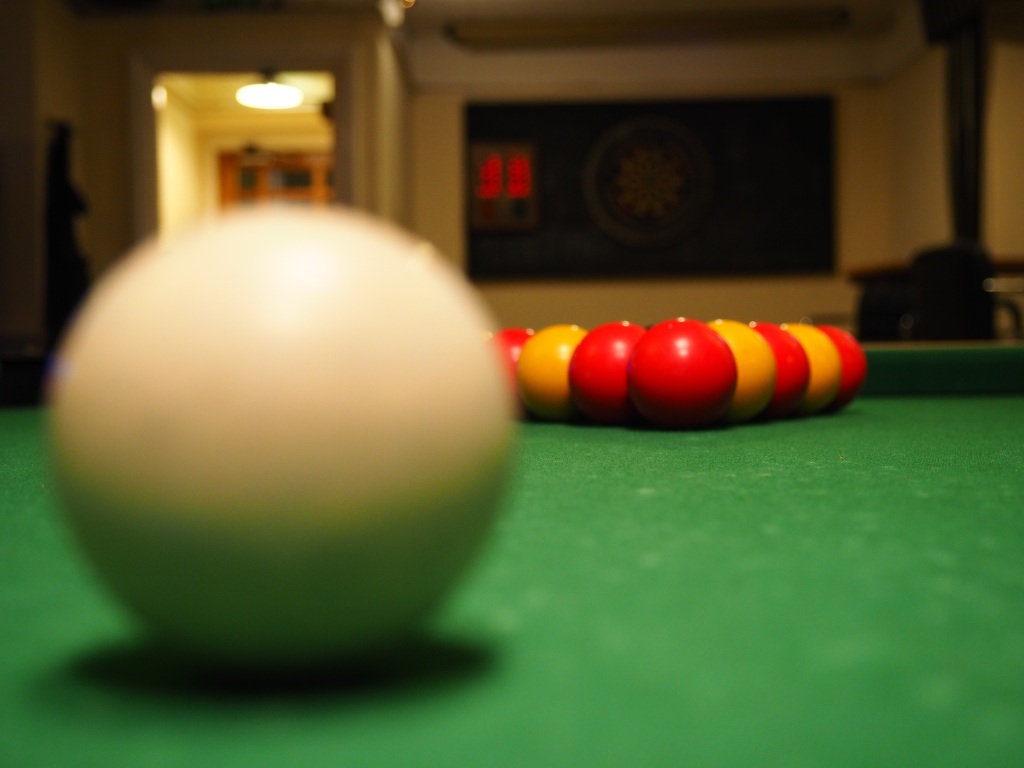 Jamie does his best at pool