One of the reasons that Bram Stoker’s Dracula is my favorite book of all time is the masterful way that Stoker builds suspense in the first 30 pages. Jonathan Harker’s diary is the classic horror trope: he writes of his train journey from London to Transylvania, lamenting about how all he can understand of the people he meets and their foreign language is “Satan” and “demon.” (Um, what more do you need?) Complete strangers are shoving crucifixes in his face and wailing for him not to go, and as a reader, you’re shouting, “Why are you getting in that cart!? Your driver has red eyes and is being called Satan and you know this because you wrote it in your damn diary gobacktoLondon!” Harker plods onward anyway, because a job in real estate was apparently hard to come by in those days.

This is how I felt sitting on the runway in Tromso, awaiting the final flight up to Longyearbyen. Let’s backtrack.

I have been drawn to the north for the past few years. The arctic is home to dry cold, polar bears, and my absolute favorite natural phenomenon, the northern lights. Plus, it’s nearly Christmas, and what better way to get into the holiday spirit than to snuggle up to the North Pole?

I came across Longyearbyen while doing a Google search on the best places to see the northern lights this year. You know I love me some solar flare-induced light shows, but since an aurora sighting is never guaranteed, I decided to choose the place that I thought would be awesome even without the lights. Longyearbyen it was.

Longyearbyen is so far north it makes Winterfell look like Hawaii. Here is a place where the sun disappears in October and doesn’t come back again until March. My curiosity was insatiable – what is it like to live in a place like this?

Created by my creative and wonderfully amazing friend, Laura. 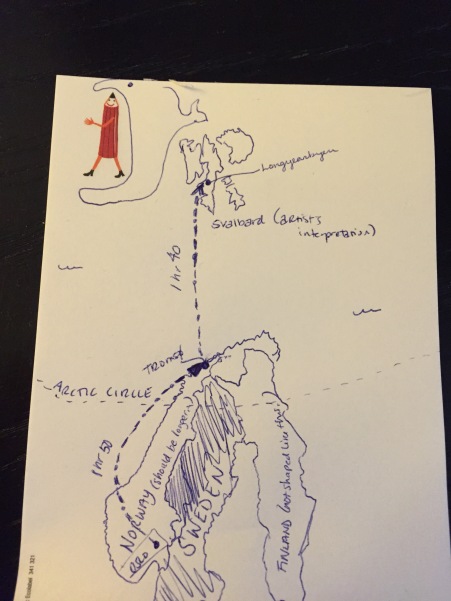 Not to scale. The semi-dotted lines illustrate my flight paths.

Before embarking on my trip, I’d oscillated between sheer joy at being so far north and sheer panic at being so freaking far north. Who voluntarily travels this far into the Arctic Circle? (Roald Amundsen, badass explorer, that’s who…before dying in a plane crash en route to Longyearbyen from Tromso. He was on a rescue mission, though. What am I doing with my life?)

Before heading north, biding my time in the Oslo airport, I made a list of what I was looking forward to the most in Longyearbyen:

Clearly, I was giddy with joy – until I boarded the last flight. My flight was not direct from Oslo to Longyearbyen; there’s a brief layover in Tromso because Svalbard, though it’s technically a part of Norway, isn’t included in the Schengen agreement, so you have to get off the plane and go through a “police ID check.”

During this time, I had to pause and reflect.

Here I was in Tromso, which is pretty far north – nearly 2 hours north of Oslo. I suddenly realized exactly how far north I was going, and how completely isolated from the rest of the world. Shudders.

“It’s fine,” I told myself. “People do this all the time! You are overreacting.”

Then I reached the gate and noticed the gigantic sign saying, “Warning: You are entering a RABIES ZONE.” I literally tripped over myself because WHAT DOES THAT MEAN!? Rabid animals prowling the runway? Does Norway send all of its rabid animals to Svalbard to live like a leper colony??

Of course, the sign gave no indication of what one is meant to do if bitten by a foaming Arctic tern, which is not reassuring – especially after that This American Life podcast a few weeks ago where a woman was attacked by a rabid raccoon in NY and had to beat it 17 times with a tire iron to kill it. (Find out: Does Svalbard airport sell tire irons?)

I got on the plane anyway.

We were told that we’d be delayed for 30 minutes due to runway closure from the snow, which meant more time to panic. Since there was no one to freak out to, I kept a running note in my iPhone, which includes gems such as

I eventually put on some Sigur Ros and relaxed, and when we finally took off and rose above the clouds, I watched as the sunlight dimmed on the horizon. For a while, there was nothing but a soft orange glow that faded upward into yellow and lime green before hitting the night sky. Then, nothing. At 1:43pm local time, I spotted a star.

Life above the clouds.

Last bits of light for a few days! 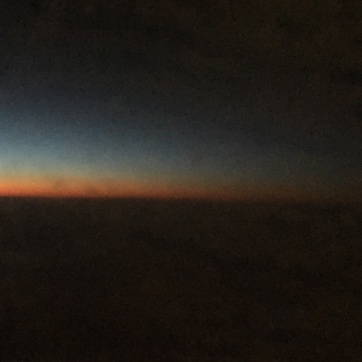 From Tromso to Longyearbyen, approximately 1pm.

As we landed – in total darkness, the runway suddenly underneath us – I realized exactly how wild and unfamiliar this place really was. For once, I had absolutely no idea what to expect apart from darkness.

Before getting off the plane, I gawked at the absolute blackness of the world outside the airplane and said to myself, “I could never live in a place like this.”