In a wildly unprecedented move for me, I went out with a friend of Carl and Alicia’s on my last night in Sapporo and allowed him to order our meal without telling me what it was. I know what you’re thinking:

Nicole, you gastronomic daredevil, you.

If you know me, you understand at once the magnitude that accompanies this relinquishing of control. It is not often that I dive headfirst into cuisine with such reckless abandon.

Alicia and Carl had met Toshiya back in December when they’d spent a few weeks in Sapporo. Having spent most of his life in Hokkaido, Toshiya knew a thing or two about local delicacies, so I braced myself with a little courage and a lot of wasabi.

“This isn’t 100% wasabi,” he said after nibbling some off a chopstick. We were sitting in a small restaurant tucked inside a wandering alleyway, dimly lit and crowded with locals donning work shirts and that unrestrained bliss that signals the start of a weekend.

“Most places, even in Japan, you don’t get real wasabi. It’s horseradish, 95%, and then a little wasabi or coloring.”

“Will horseradish still kill the bacteria?”

(Authenticity is great, but dead bacteria is better.)

He assured me it would. Our first dish arrived: a cheese plate with fresh mozzarella and some spongy soy cheese that actually tasted pretty good. 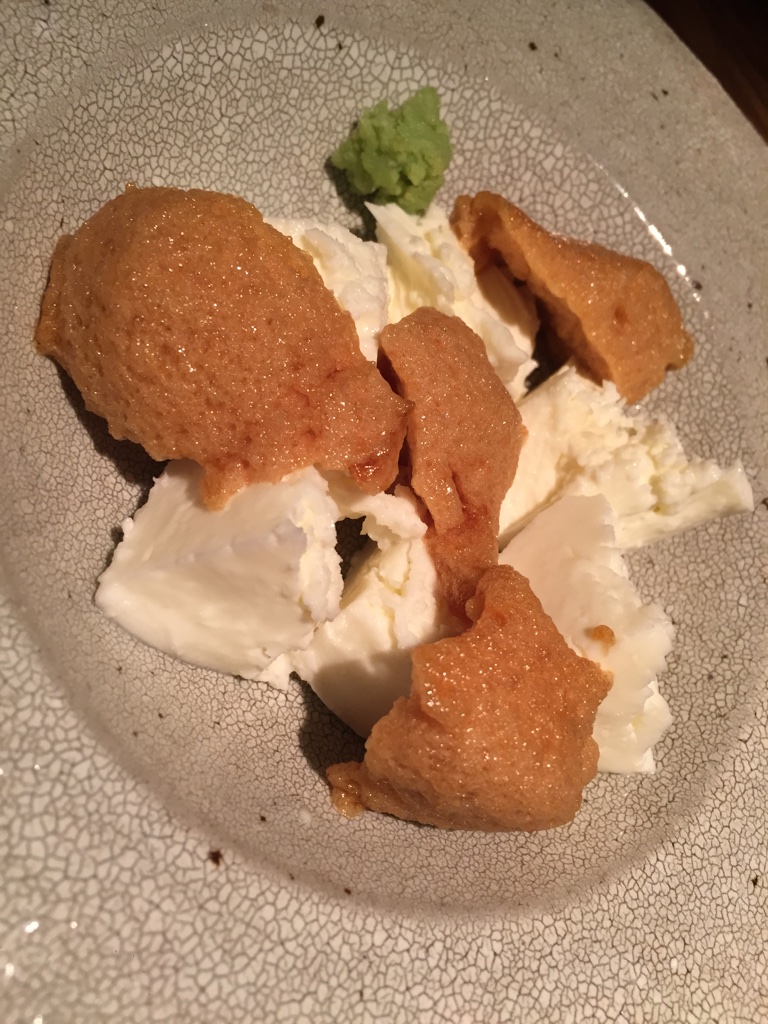 From there, it got more interesting.

The next dish to arrive featured four daintily wrapped rolls: deer meat and sea urchin. I’ve never had sea urchin before, and having nearly stomped on a few in the ocean, I didn’t find them all that appealing. Add to that the fact that sea urchin resembles an alien orange goo, and it becomes, remarkably, even less appealing.

I tried it anyway. The sludgy texture coupled with a semi-briny taste did not land it a place on my list of favorite foods. The venison, however, tasted tender and meaty. Yum.

Between courses, we sipped deliciously sweet and crisp sake, which was served out of a bottle twice as large as my head. They left the bottle at our table, but Toshiya explained that this did not mean I could liberally refill my glass when I felt like it.

Our last course emerged, quite possibly the strangest and most otherworldly of all: a salad – described by Toshiya as “a weird salad” – comprised of what looked like flower petals, gummy worms, and rubbery sea creature appendages.

I insisted he not tell me what it was. Feeling daring, I piled a piece of everything onto my spoon – with a generous slathering of wasabi/horseradish for good measure – and shoveled it into my mouth before I could change my mind.

I don’t know what it tasted like; it was all texture. Gelatin, crispy radish, chewy bits. The chewy bits turned out to be parts of a giant clam, the likes of which I observed in a refrigerator case on my way out, and sea bass, which wasn’t too weird. 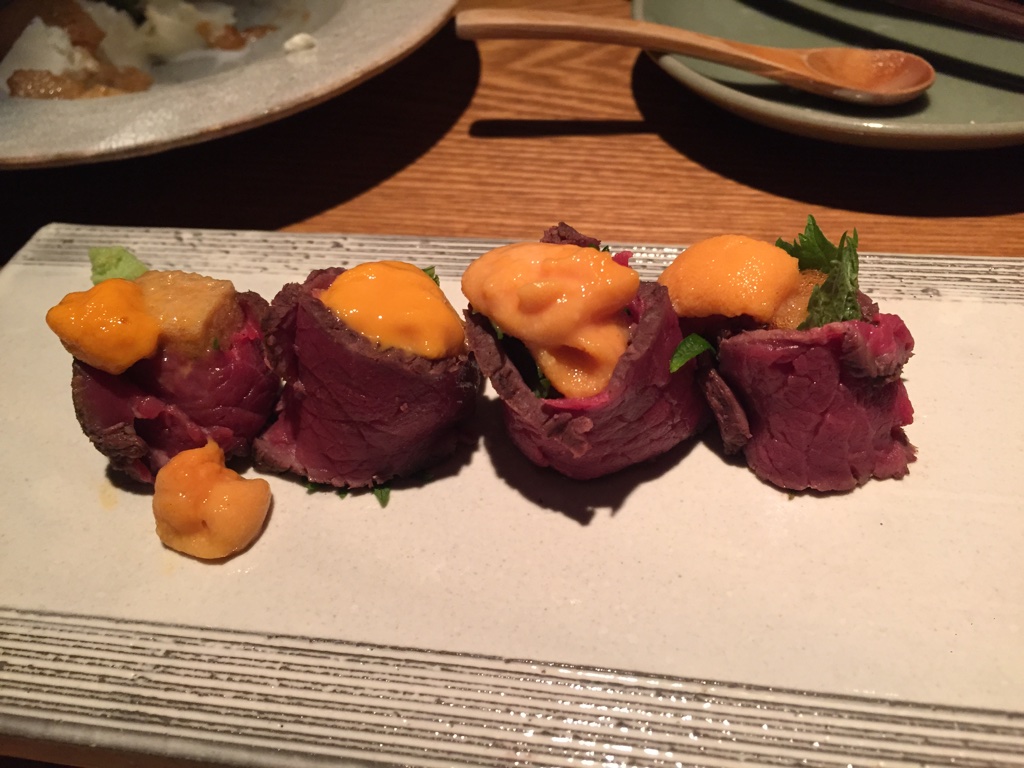 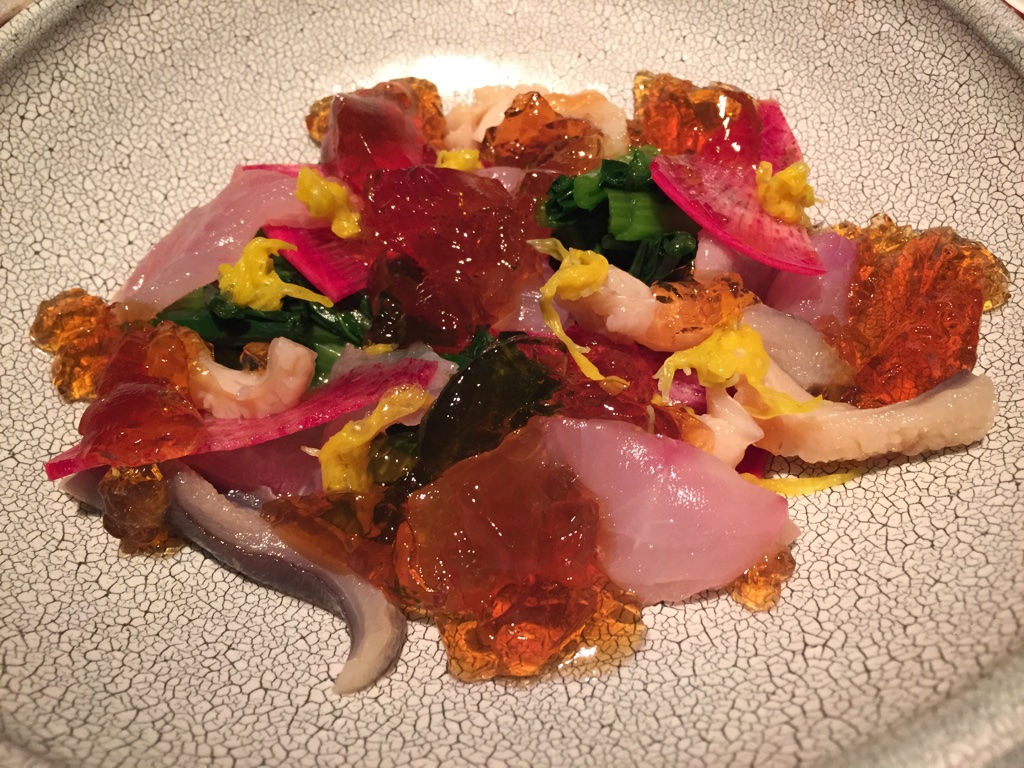 Still, I stuck with my potato pudding from then on, until I also found a clam at the bottom of that.

[Side note on clams: I don’t know that I will eat clams again because A) I thought they give you one of the hepatitises, even though Sarah swears they don’t and B) We put a clam in the hot pot the other night and Niall said it was both alive and could feel pain. I’m not a big fan of clams anyway.]

After dinner, Toshiya asked if I wanted to go to a rowdy local bar with lots of cigarette smoke or a sake bar owned by his friend. I opted for the latter, partly because I didn’t want to scrub the stench of smoke out of my hair but mostly because sake.

The sake bar was literally around one corner and up a narrow staircase into a tiny room that housed just two tables. We crowded into one and I put him in charge of ordering again. 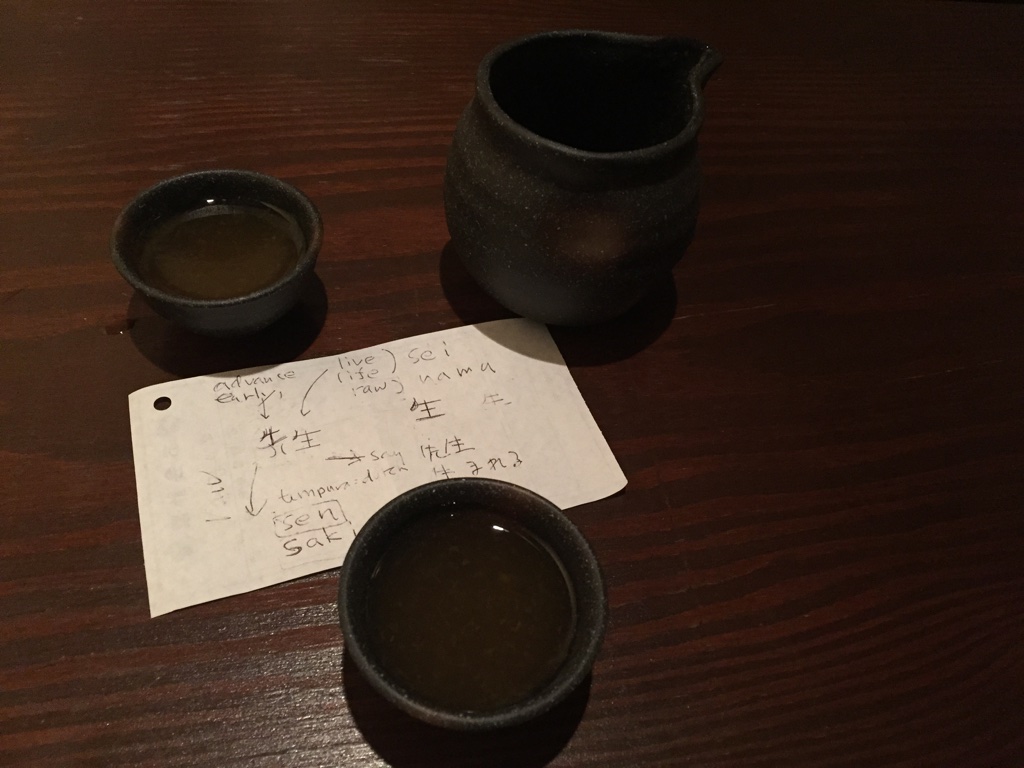 We went through two different kinds of sake and some plum wine, all while discussing in depth the origin of kanji and the evolution of the Japanese language. I showed him the only kanji I know how to write, the one for “teacher” or “sensei,” and he explained that part of the kanji is Japanese but the second part comes from China. The first means “advance” or “early” and the second means “live,” “life,” or “raw” (as it’s used to describe hops in Sapporo beer). Depending on the context, it’s pronounced differently.

He showed me the difference between Chinese and Japanese styles of writing and I offered up a number of Japanese names I knew and asked him what they meant. River, or kawa, has a lovely kanji that depicts three lines. I also learned the kanji for moon, because I think the moon is wonderful. Toshiya told me that the kanji for love comes from an expression that goes something like, “The moon is beautiful tonight,” which makes me love the language even more.

Then we talked about the languages and diaspora over a third jug of sake. I could’ve waxed on about linguistics all night, except I had a flight to catch at 7:50 the following morning. I write to you now* from the ANA lounge in Tokyo’s Narita airport, where I have four glorious hours to spend however I like: listening to Running With the Pack; writing; reading The Three-Cornered World; stuffing my face with cherry sables and plum wine.

The joy of limitless options.

*By the time you read this, now will mean something different. 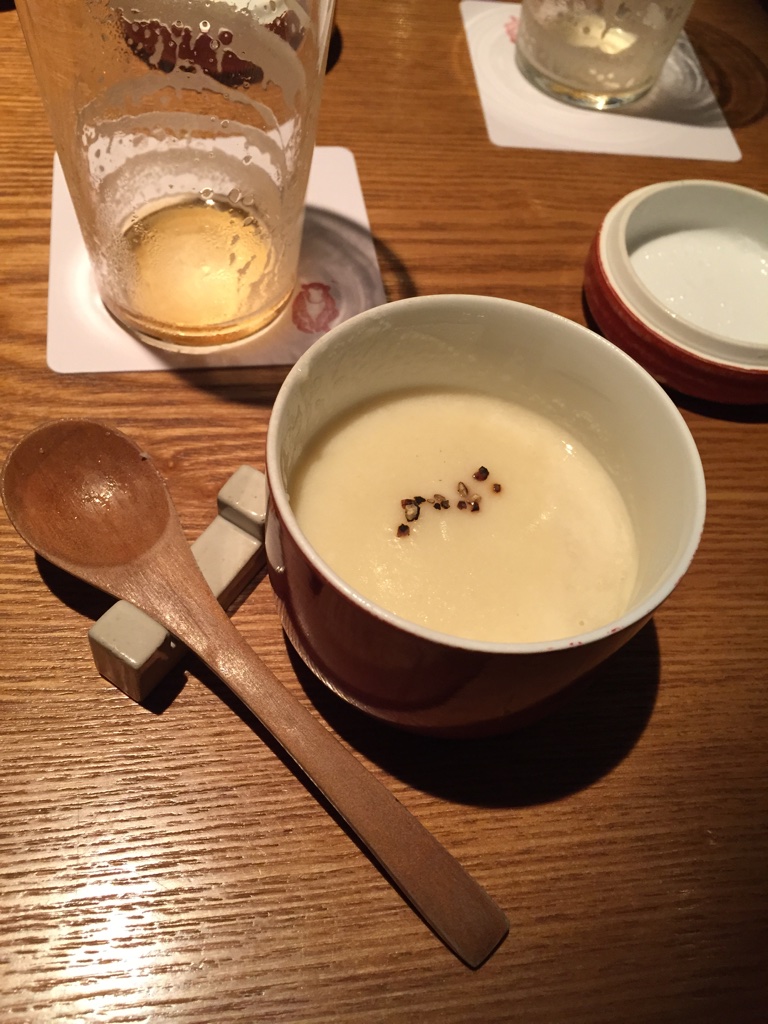 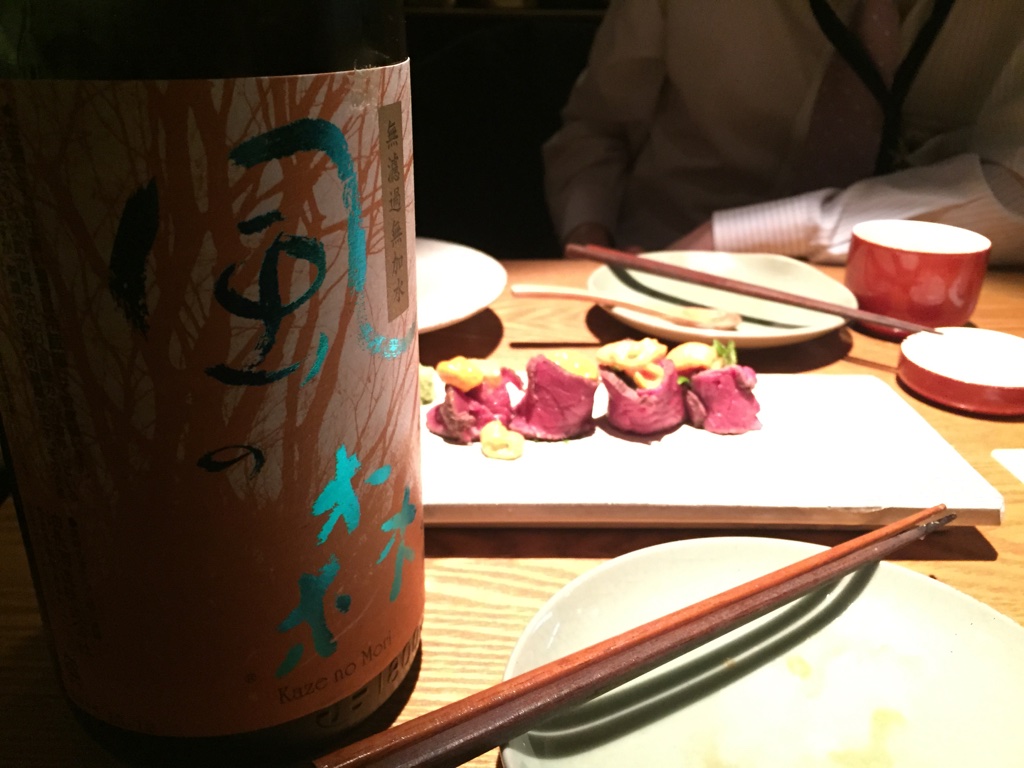 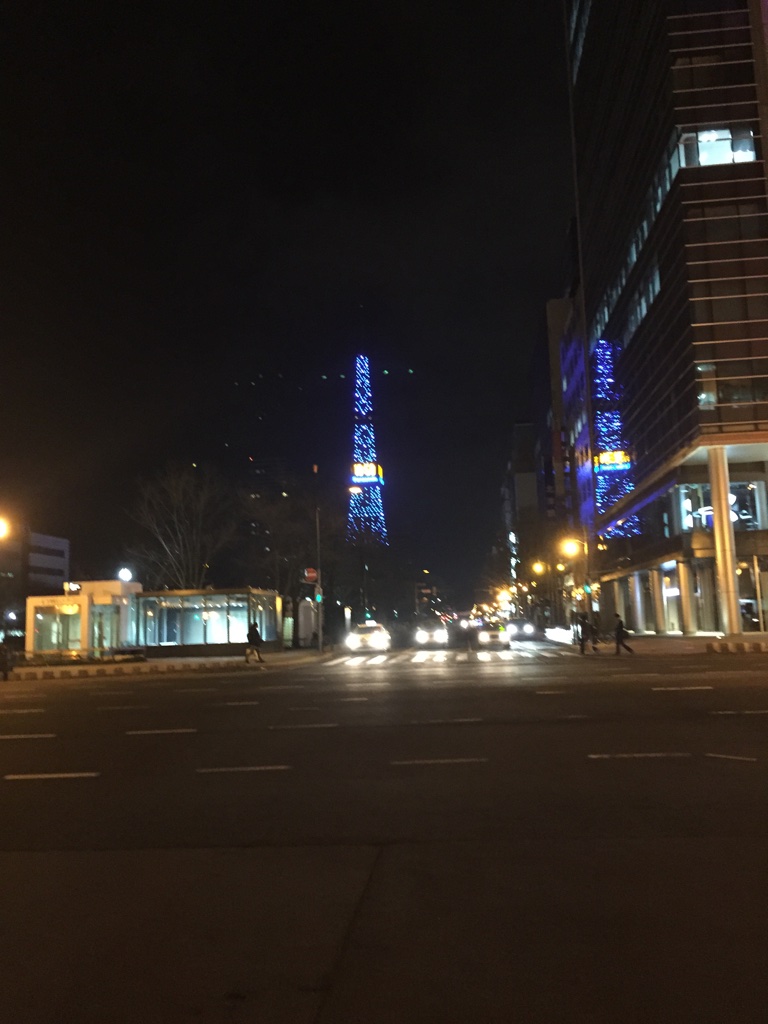