Manila Bay Pie is in a league of its own, and is best enjoyed in a $500 Vineyard Vines blazer while yachting around your private Maine harbor.

A few weeks ago, I stumbled upon a recipe on NPR for a “North Carolina Pie That Elicits An ‘Oh My God’ Response.” My intrigue was piqued by the well-crafted headline and the fact that anyone could have that kind of a response to pie.

What kind of pie prompts someone to drawl the Lord’s name in vain? Surely not apple. (Apple would be more of a “Mmmmmerica.”)

Christened Atlantic Beach Pie, this briny dessert marries a creamy citrus filling with a crunchy Saltine crust. Topped with a cloud of whipped cream and a shower of sea salt, it promises to turn us all into synesthetes with every bite. How many times can you say you’ve tasted a day at the beach? (Answer: As many times as you eat this pie.)

Equally appealing is the pie’s story. According to recipe-perfecter Bill Smith, kids growing up along the North Carolina coast were told they’d get instantly sick if they ate any dessert after having seafood – with the exception of this pie. I like good folklore. I also like an excuse to eat a pie.

I postponed pie-making for about a week because I couldn’t find Saltines and I desperately wanted to follow the recipe to perfection. Fortunately, Andrea convinced me that regular salt crackers, or Sky Flakes as they’re branded here in the Philippines, would probably suffice.

Since we were already diverging from the integrity of the recipe, and because we live in Manila, I thought it would be a fun Filipino twist to scrap the 1/2 cup of lime juice and replace it with 1/2 a cup of calamansi juice. (Calamansi are little lime-orange hybrids.)

To this end, we didn’t think it right to label the pie “Atlantic Beach” anymore, so we opted for the closest significant body of water: Manila Bay.

Andrea graciously offered to wring out 1/2 a cup of calamansi juice while I attacked the crackers. It’s worth pointing out that the juice-to-seed ratio of a calamansi is unbalanced in favor of seeds, which makes squeezing an entire half cup of juice somewhat time-consuming.

It didn’t help that some of the calamansi had grown mold since I last saw them. (I didn’t know they could do that.) Andrea’s task became one of sorting through for the best specimens, slicing them open, and pinching 1/8 of a teaspoon’s worth of juice out of them. Collecting 1/2 cup of tears from your first-born would have been a speedier task.

How many calamansi to make 1/2 cup of juice? 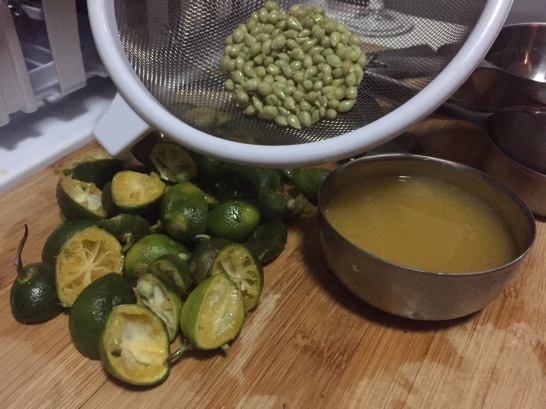 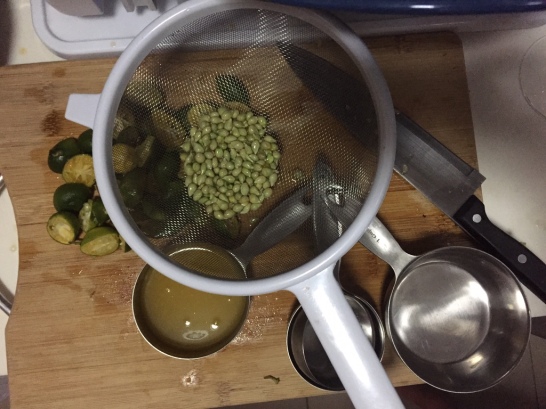 Meanwhile, I found myself elbow-deep in a pile of Sky Flakes, a brand of salt crackers so special they can apparently only be produced in the Philippines. Because the Internet doesn’t offer a Saltine to Sky Flake conversion chart, I had to guess at how many crackers I’d need to crush for the crust.

I guessed wrong, but Andrea caught me before I smashed 100 crackers all over my counter.

The recipe calls for Saltines that are crushed but not ground to dust, which is a mythical medium if you ask me. I achieved this by punching cracker packets with my fist and crumbling them in my hands. 1/2 cup of butter softened by the simmering Manila heat, plus 3 tablespoons of sugar, and behold! Pie crust. 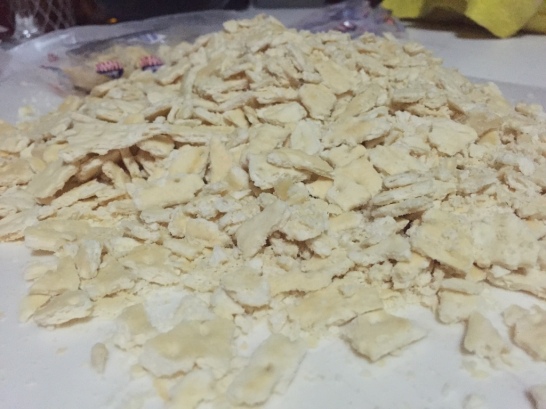 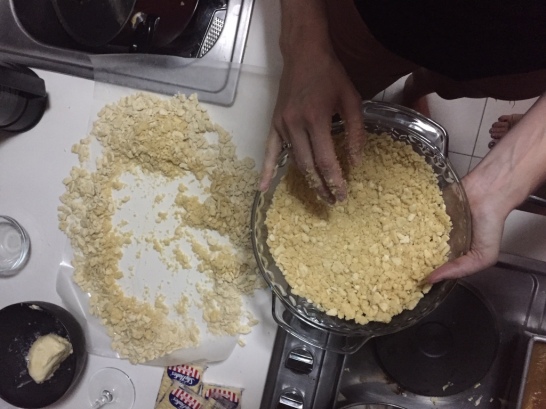 I popped it in the oven in my brand new glass pie dish – thanks, Andrea! – and we got to work on the filling.

I say work, but that’s a lie. This pie was seriously, apart from strangling calamansi, the easiest recipe. The filling is sweetened condensed milk, the citrus juice, and four egg yolks. That’s it.

The crust came out all golden and sunny, and I finished whisking the filling. As I poured it in, Andrea scanned the Internet for pictures of the pie. And something gobsmackingly shocking happened:

Our pie looked like the pies in the photos.

This never happens. In fact, Andrea noted, ours was smoother. We baked it for 16 minutes, chilled it for half an episode of Nashville, and Andrea whisked up some whipped cream to puddle on top. Add a pinch of sea salt and —

Its cold, cheesecake-y consistency pairs well with the snappy crust. It tastes like an ocean wave on your feet after running across scorching sand. What’s especially joyful about it is each bite contains surprising layers of flavor – a bit of sea salt tucked under the whipped cream tower, a tangy splash of calamansi amidst the custard, a large chunk of Sky Flake that didn’t quite pack into the crust.

Each bite is an explosion of  culinary flotsam.

This pie is super simple to whip up, and is sweet and salty and effective at jettisoning the taste of home into my mouth.

Also, Andrea got a few solid math word problems out of the evening, so it’s a win-win in my book. 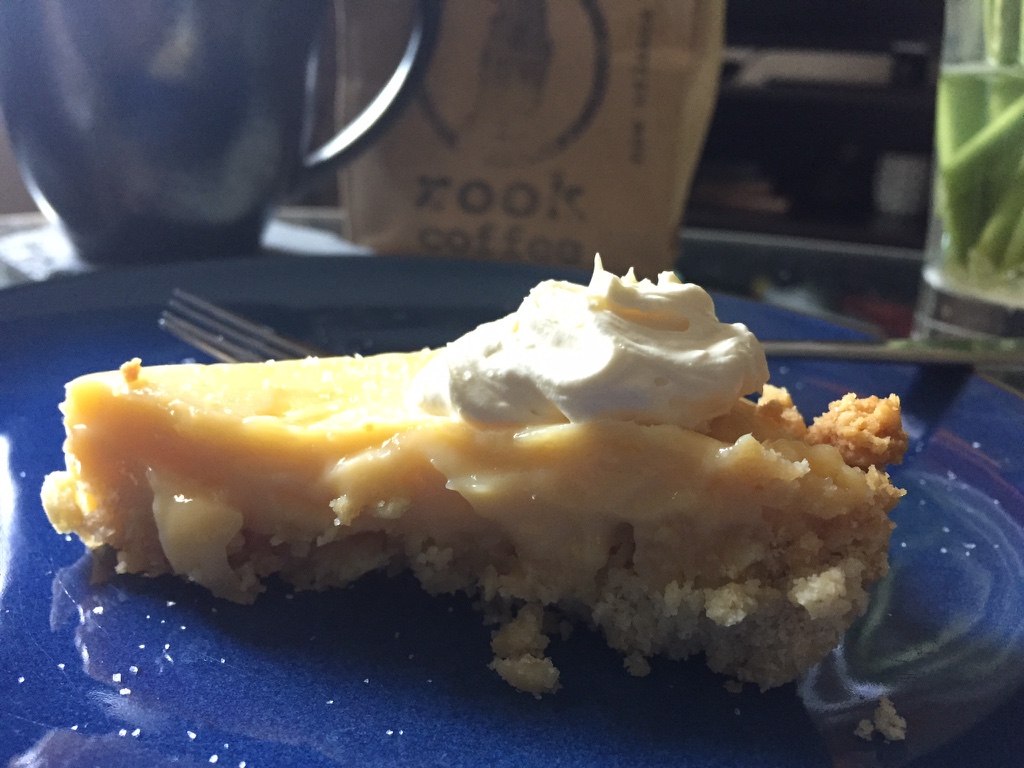 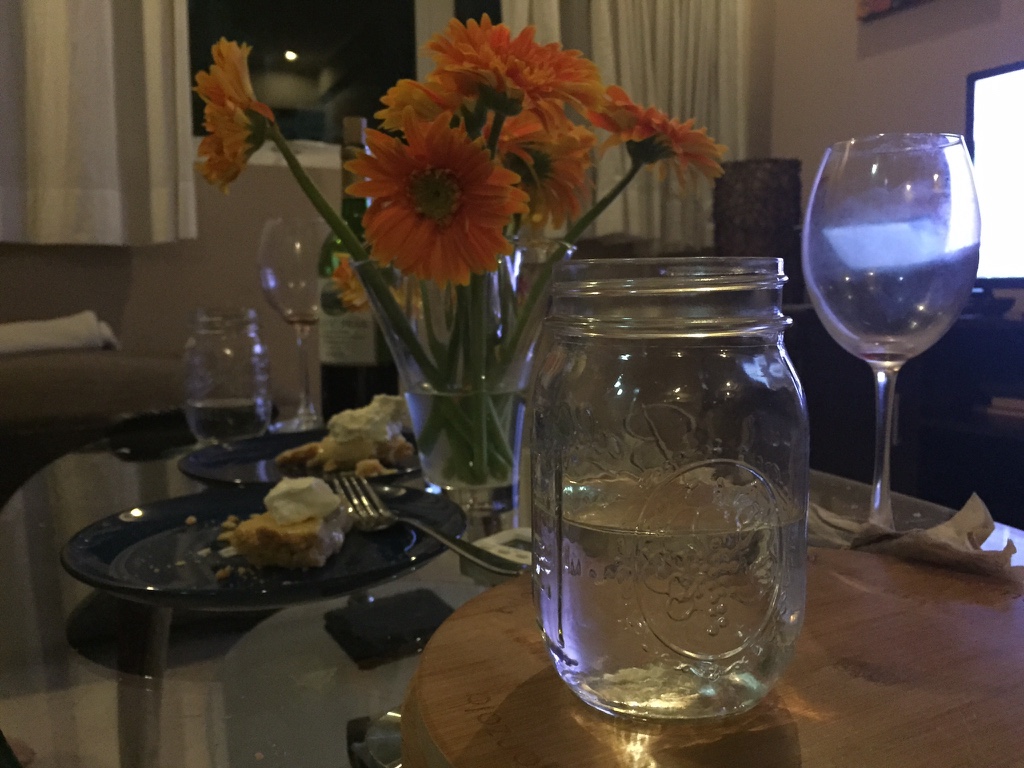 You can also have the pie for lunch.