It was at the ugly cow-milking hour of 3:30 in the morning that I arrived at Sarah’s in our rented Hyundai Tucson. Across the street, the Tipsy Pig was still thumping with nightlife. I had wanted to go out to Pool Club with Elliot the night before to meet Hodor, who was DJing, but luckily thought better of it. I was already knackered and I hadn’t even been up for 30 minutes.

We had an 8-hour drive ahead of us and I was fighting off a persistent cold. Sarah, as usual, was full of an excitement I rarely feel at 3:30 in the morning.

It’s probably safe to say that we overpacked. In the end, Sarah left the tent and camping gear at home, but we still had 6-7 bags packed with canned goods and Elliot’s handy portable cooker. We also had a cooler with us, which I’d packed with ice in tupperware, that would nobly hold out for a few days before everything inside went bad. But more on that later.

“So, I was told to scatter bribe money in different compartments of the car in case we get pulled over,” Sarah told me as she got in, opening the glove box. “It’s good to be prepared.”

I threw a 500 into the console and then put a tampon in the cupholders.

“If we get pulled over by a male cop, it might make him uncomfortable.” It was a shot in the dark, but maybe a conservative cop would hesitate before taking a 500 that brushed against a tampon.

While Sarah plugged our destination into her Google Maps, I scanned my phone contacts. I’d gotten the numbers of our director, head of security, and some other helpful personnel in case, as I dreaded, we got kidnapped.

I imagined getting pulled over on some desolate rural road and being forced out of the car. I’d speed dial the security office and hope for the best. Also, Sarah and I had learned the Tagalog words for, “The baby is coming!” in hopes that kidnappers might be put off by a pregnant woman.

All set to go, we headed for SM Aura to get onto the SLEX, only we missed the turn and ended up down a tiny road where I deftly executed a 12-point turn. Off to a great start.

One thing I’d expected of our road trip was a long stretch of highway studded with rest stops. En route to La Union, we’d stopped at a Starbucks and it had warmed my heart. If you’re heading south, do not expect this.

We were on the SLEX for a short while before turning off onto some highway – was it the AH26? – that really did not deserve to be called “highway.” Talk about misnomers. This road was a two-lane job, winding through tiny barangays but providing unparalleled glimpses of secret, lesser-traveled places in the Philippines.

Sarah’s turn to drive! One of many bridges under construction.

Our car after the rain. (Or some cool rusted out bus on the side of the ‘highway’.)

“We could be in any time period,” I added, noting the absence of advertisements, technology. “It could be 1960 right now.”

As the sun came up, the roads through the barangays became clogged with jeepneys, trikes, pedestrians, mopeds, cyclists, and the occasional dog or goat darting out into the road.

This wasn’t the relaxing cruise I’d imagined down some wide highway, and overtaking jeepneys and trikes is not a stress-free task, but it still provided a view of the country you don’t get from an airplane.

We finally found a McDonalds where I procured a much-needed coffee, and we continued on through Daet to Bagasbas. A celebrated surf spot, Bagasbas had manifested itself in my mind as a town similar to La Union. In many ways, it was.

We arrived in a sprinkle of rain to a lone road snaking along a cheerless beach, slate waves pommelling the wet sand. The Lighthouse resort was top-ranked in Bagasbas, and I suppose it wasn’t so bad.

I realized on this trip that I’ve become spoiled when it comes to hotels. My backpacking days are over, romanticized now in memories of South America. I mentioned this to Sarah one rainy night in the Fort as we went over our expectations for the trip.

“I’m worried that we’ll rock up in some Podunk town and slum it in a bug-infested hostel and you’ll be like, ‘But it’s an adventure!‘” I confessed, which probably isn’t too far off. Sarah made the most of our accommodations, but I struggled a bit, partly because I was ill. Tossing and turning all night is no way to get better.

Anyway, our room was actually pretty decent. The beds were comfy and the air con worked, and once they swept the dying cockroaches, mosquitos, and spiders out of the room, it seemed livable.

We were told to park the car on the basketball court, which we did as the sky opened up and it poured. We sat in the car and ate food until it passed, then explored the beach until it rained again. The Lighthouse offered a little row of bamboo and straw huts to sit in and look out over the road, which we did with two San Migs and a plate of chop suey.

Essentials for waiting out a storm: car, Lays, friends.

Sarah poses with our ride.

It doesn’t sound glamorous – and it wasn’t – but after an 8-hour drive, it felt mighty relaxing. I love a storm; it sounds like life and is such a far cry from dry and dusty Egypt that I still appreciate it when it happens.

Plus, Sarah’s company was superb. It’s amazing how you can spend so much time with someone and still have something to talk about for hours.

And, of course, there was the satisfying sense of having safely completed our first leg of the journey. That merited a second round of San Migs and a raucous shout of, “The baby is coming!”

This van came and picked up 6-8 children. 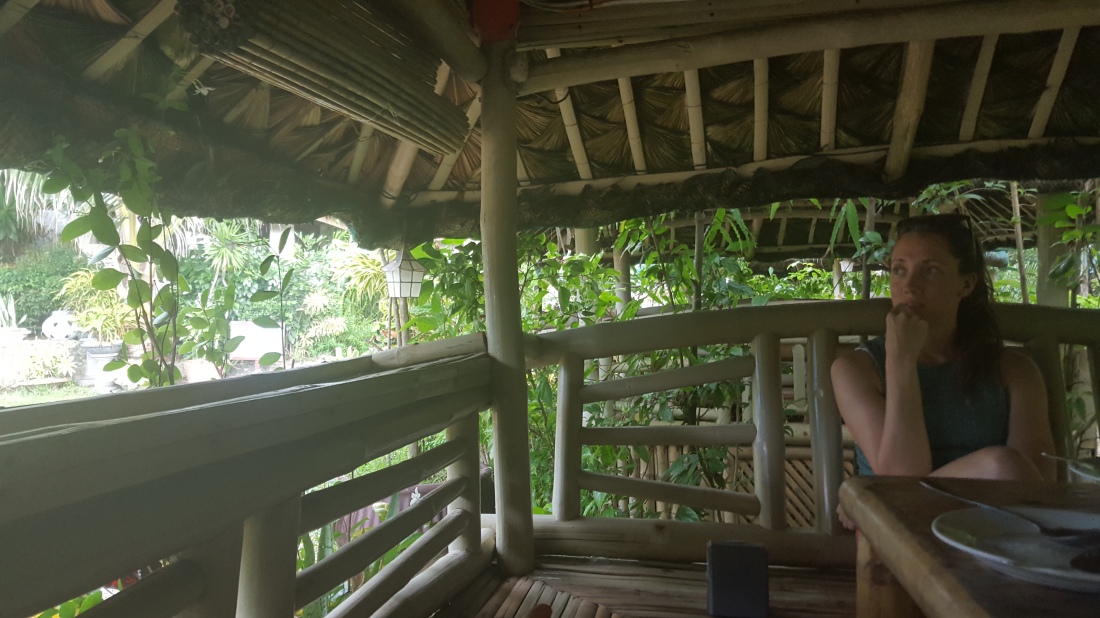