I awoke the following morning to Sarah smiling at me.

“Cooey! This is what you were worried about. I’ve been watching you sleep.”

She explained that she’d been up for ages, strolling the beach and photographing a stunning sunrise while I’d slept nearly a full 12 hours. I needed it, and I was still feeling pretty sick. I could only hope that the next place we were staying would be clean and cozy to cure my illness, which I decided was early stages of malaria.

We’d planned on taking a surf lesson, so we walked down to the beach and beheld a glassy sea.

“I mean…the waves aren’t as bad as La Union,” I remarked.

“That’s because there aren’t any.”

Convinced we’d find surfing opportunities elsewhere, we ditched the lesson and instead did a 15-minute yoga session on the beach, which is a fabulous way to start your day. Sun salutations to the actual sun? Yes, please.

As we lunged our way down into the water – we were hoping to be active and fit on our trip – Sarah gleefully exclaimed, “We should do yoga every morning!” I was equally enthusiastic.

We did not do yoga again.

Breakfast was a tasty fried egg with sweet bread and watermelon. The coffee was no Rook, but it had caffeine and this made me happy. We had a 5-hour drive to Caramoan today, which we intended to begin after breakfast, but we locked ourselves in the room and had to wait to be rescued.

The room phone didn’t work, so we resorted to twisting the doorknob repeatedly and shouting for help. Eventually, someone walked by and unlocked it. (How did we accomplish this? Sarah left the keys in the doorknob and I locked the door from the inside. The keys were so big and unwieldy that they got stuck on the doorframe and wouldn’t turn properly.) 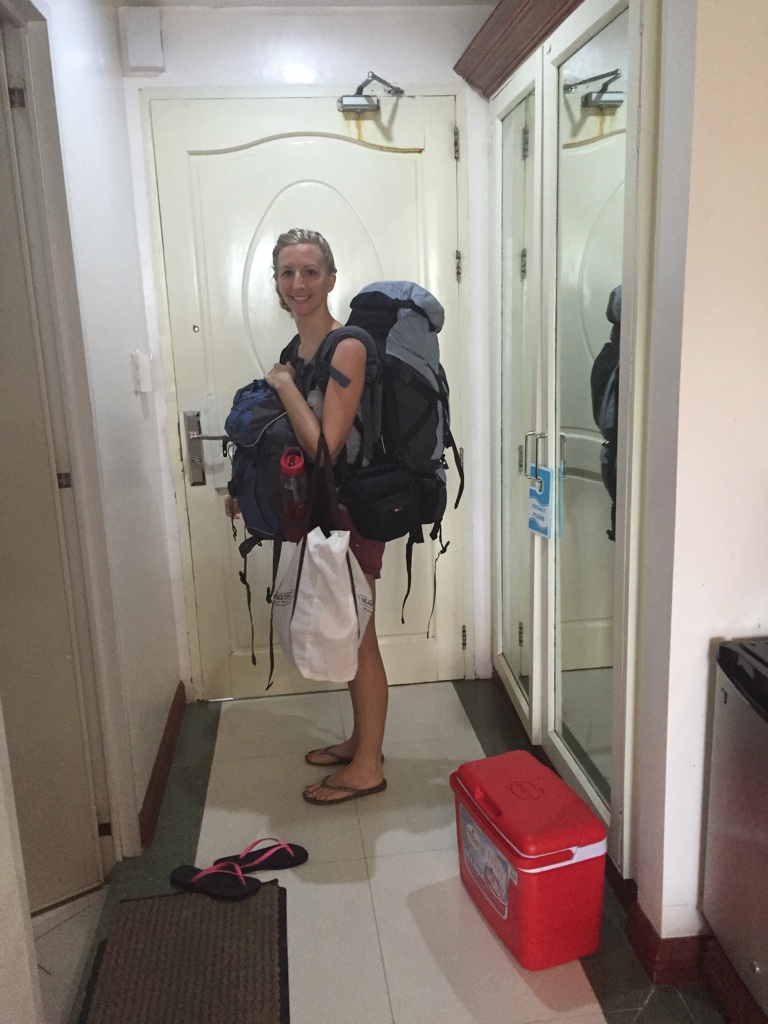 Sarah’s stunning photo of Bagasbas in the morning. Those colors!

I was excited to see Caramoan, a town famed for its beaches and transparent water. The road out of Bagasbas wound through barangays before eventually opening up a little. A few hours in, we stopped at a gas station for fuel and a bathroom break. As I headed back toward the car, I saw Sarah standing with the driver’s side door open, dousing the car with water.

She turned to face me, her eyes wide and slightly panicked.

“Oh my God, spiders. There are spiders everywhere.”

Still a little confused, I moved closer. The driver’s side door frame was soaking, and among the running water there darted tiny spiders. Enough to be disconcerting.

“You should’ve seen it,” she went on. “I opened the door and it was crawling with them. A spider must’ve laid eggs in here and they’ve just hatched.”

Well. This added a new element of excitement to the trip. Sarah assured me that they were only in the door frame and not in the car, but I still couldn’t shake the idea that I’d be driving along and look down to find my leg teeming with spiders. Shudder!

Cautiously, I climbed into the seat and resumed driving down a pretty open road that eventually took us into the mountains. If there is one leg of the journey that stands out to me aesthetically, it is this. Hands down.

The scenery offered vistas of crystal, glass-calm waters in varying teals and aquamarines. Verdant crags jutted up and cut a rock maze off pristine, scalloped white-sand beaches below. The drive took us through dozens of barangays, tiny humble villages crowding narrow roads, cramped with trikes and motorbikes and wide-eyed children hurrying to school beneath bright umbrellas or under the weight of bulky backpacks.

It’s a slow journey in some parts, slowing to avoid ragged dogs, rogue chickens, men riding water buffalo. In the barangays, I stressed a little, having to speedily overtake giant trucks to make sure we’d keep the sunlight all the way to Caramoan.

Sarah is a fabulous copilot, calmly navigating windy roads and shuffling our all-Macklemore playlist. As a passenger, she enjoyed more of the view.

I’d look and we’d already passed it. Still, she took copious amounts of video as we laughed, discussed politics and current events, and had a really, really, really good time.

Eventually, our collective vocabulary was reduced to “wow,” “stunning,” and “gorgeous.” Living in Manila is cool, but how fortunate to get to see this part of the country?

A highway, according to the Philippines

A glimpse of sea! 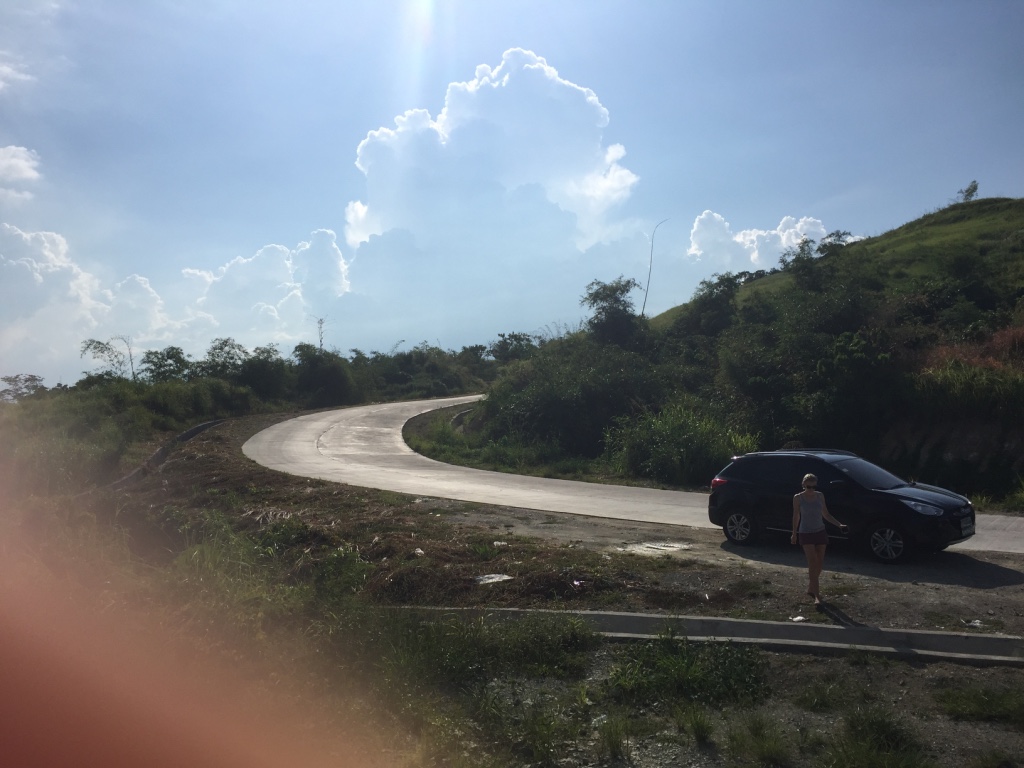 My finger screwed this up, but how gorgeous!

Gleeful and optimistic, we kept on, hoping to make Caramoan before dark.

And then, without any warning, the mountain roads in all of their wide, serpentine glory, suddenly stopped being paved. One minute we were whizzing around dinosaurian ferns that possibly concealed raptors, the next we were swerving around jackhammer pockmarks. Then dirt. Then massively-potholed stretches of torture.

“You’ve got another hour or so,” Sarah said at one point.

Talk about white knuckles. Our Hyundai Tucson was a formidable vehicle with its silky smooth suspension, but hit a hole and there goes a tire. Did we have a spare? Sarah asked. I didn’t know. Would we even make it? Break down? Get stuck in the Philippines’ spontaneous bursts of monsoon rain and drift out to sea? I voiced none of these fears. Later, Sarah admitted that she didn’t think we’d make it.

It was scary. I rode the brake most of the way and silently willed the car up steeper hills. The barangays grew further and further apart, with kids running along waving.

By the time we arrived in Caramoan, we were exhausted and a little nauseous. Sarah ran ahead to make sure we were at the right place, and then returned to the car.

She had told me earlier that Bagasbas was probably one of the nicer places we would stay on our trip, but I hadn’t appreciated that statement until now.

Breeze and Waves Cottages are actually not cottages. Instead, the rooms are lined up in a simple, two-story building that resembles an old motel you might find yourself murdered in. The room itself was definitely basic, with one large bed, a small bed too close to the floor for my comfort, and a cramped bathroom with a rusty shower nozzle you could point at your head while using the toilet, if you so desired. A mosquito buzzed around aimlessly, probably laden with malaria. At this point in the trip, I decided I’d save a real shower for a real hotel, since I was slathered in DEET and sunscreen.

There is decent accommodation on Caramoan, but Survivor was being filmed there and the crew was enjoying the luxuries of Gota Beach. At one point, a gentleman in the road asked if we were a part of the Survivor crew.

Hungry, we headed to the reception desk, which was located in a dark common area.

The ground was dirt, the walls cement, and the interior dull and joyless. No one was dining there.

“Do you have a dinner menu?” we asked.

The foodie in me wept.

The vegetables turned out good, and Sarah loved her fish. I poked my chicken and felt sad, then decided, whatever. I’d see stars at least. And we did. After dinner – and slathering ourselves with DEET – we walked along the beach and spied a glittering skyful of stars. I checked my ISS app to find that there would be a flyby on the 19th. Life could be worse.

Thanks for stealing all the good accommodations.

The vegetables were pretty decent!