The Road to Katahdin

Each summer, Shar comes up with an adrenaline-fueled adventure she wants to embark on and invites me along. One summer, it was Half Dome, Yosemite’s slippery and near-vertical monolith that Mac users will be familiar with from their computer backgrounds.

This year, it was the Knife Edge at Katahdin. A cursory Google search revealed that 44 people have died hiking the Knife Edge. This gave me pause, as I thought about the places Shar has taken me to – often isolated patches of wilderness – and the high risk factor of these excursions.

“Is this your annual attempt to kill me off? Every year you try to take me to a secluded and dangerous piece of wilderness and you encourage me to climb big things,” I messaged her.

“No one else can be suckered into doing this shit with me.”

Of course, I said yes.

Planning: You Should Do This

And we were off to hike the Knife Edge!

It turns out, probably unsurprisingly, that advance planning is a good idea. The best way to hike the Knife Edge is to camp/park at Roaring Brook campgrounds, where you can hike the Chimney Pond trail to Cathedral (if you’re feeling daring) or Saddle (if you need a rest), both of which eventually drop you at the vertiginous Knife Edge. Then you take Helon Taylor back to Roaring Brook.

Of course, Roaring Brook campground was booked, as was its parking lot. The website suggests you book in March if you want to camp there.

Another blogger said that spontaneous hikers can arrive early in the morning and hope to be granted one of a very few parking spots that are given out each morning to people who haven’t reserved in advance. When I say “early,” I mean something like 3:30. And then you sit in the car until the ranger shows up at 6.

A risk, especially if we were turned away.

Undeterred, Shar and I spent the night before our trip in a Starbucks, poring over confusing maps of Baxter State Park’s numerous winding mountain trails. Knowing very little about the nature of each trail, Shar and I simply chose a parking lot that still had spaces available – Katahdin Stream – and attempted to navigate trails from that lot to the Knife Edge based on the length of each trail in miles.

With this approach, we decided we’d park at Katahdin Stream and hike the Abol Trail – closed all season but set to open the day of our hike – to Baxter Peak, then take the Knife Edge to Chimney Peak. From here, we had two options:

If you’ve hiked Katahdin and are reading this, you’re probably having a good old laugh at Option #2. If you haven’t hiked Katahdin, the reason for humor will become clear soon enough.

Starbucks was closing, so we found a nearby campground called The Big Moose Inn, whose email response time was rated highly, and decided we’d camp there or crash in their sleep cabins.

From New Jersey to Maine, our GPS estimated it would take around 8 hours. Shar and I hit the road at 8:30/9 on Thursday, a full hour past our intended start time.

It took us about 12 hours to reach Big Moose. You might think this sounds miserable, but as I thought back to summers past, I realized that Shar and I don’t see enough of each other. Ever. 12 hours in a car with your best friend whom you haven’t seen for months is excellent time for catching up.

Plus, the scenery was gloriously breathtaking. There was vegan popcorn, coffee breaks, rest stops in Connecticut, and lots of sunshine.

We drove through a small yet laudable slice of New Hampshire, which gave me a sense of New Hampshire’s character. Unlike most states, which welcome you with a standard sign that simply states, “Welcome!” with the governor’s name printed below, New Hampshire seemed intent on whisking passersby to its liquor store.

Immediately upon arriving, signs sprung up for this epic liquor store. Digital boards alerted drivers when they could exit to immerse themselves in shelves of New Hampshire’s finest liquor. If you missed the exit, not to worry! There was another on the other side. Once we passed the liquor store, we were basically out of New Hampshire.

And Maine? Well. I’d never been that far north on the East Coast, but I’d heard that Maine was stunning in its evergreen grandeur, and it was. Wide, languorous straight roads bisected endless stretches of impenetrable pine forest. You can’t help but sigh majestically as you drive through.

We stopped for dinner in Bangor, a tiny little hipster town that Shar said reminded her of the ’90s. A man strummed furiously on his guitar outside of Blaze, a kitschy little restaurant serving up craft beers and tasty veggie burgers, where we stretched our legs and filled our stomachs.

Concerned that our campsite would not sell alcohol, Shar and I ducked into a quaint little wine shop and picked up a 6-pack of Ballast Point and headed back to the car.

Our arrival at Big Moose was so behind schedule that the kind receptionist phoned Shar to make sure we weren’t ditching. It was edging up on 9:30 and the sun was almost entirely gone. The sky was that soft shade of fading blue and lavender that comes with the romantic gloaming hour before dark.

Of course, this meant we couldn’t see very much, so if a blundering moose wandered out in front of our car, we might not be climbing Katahdin after all.

Unfortunately, we did not see any moose. (This is so often the theme of our trips. Shar and I have always wanted to see a moose, and we excitedly breeze by road signs advertising “Moose Crossing”, yet the moose never seem to cross there. It is misleading and thoroughly disappointing.)

We pulled into the Big Moose Inn to hear live music thumping out of the adjoining bar, the Loose Moose. The inn itself was welcoming, with a mounted moose head and bear head on the wall in the lounge, where tired campers reclined on leather sofas.

The receptionist, Laura, showed us a map to Cabin 10, a basic sleep cabin. It included a cozy kitchenette, two beds, and a spectacular view of the lake.

The bathrooms were a 10-second hike away and were surprisingly clean and bug-less. We dumped our stuff and headed back down to the bar for some drinks and to inquire about possible hikes in the morning.

I perused a map with Laura at reception and told her our plan of hiking all the way around the Knife Edge. She laughed.

“That’s not going to work,” she told me. “Dudley Trail is closed.”

This isn’t the only reason why it wouldn’t work.

“If you’re taking Hunt Trail, that’s about 10 miles there and back. It takes 8-10 hours to hike Hunt Trail to Baxter Peak and back to Katahdin Stream.”

“It’s risky,” she told me with a skeptical look. “Usually there’s lots of people going back and forth between the campgrounds, but you never know.”

Shar and I decided we’d take Hunt to Baxter Peak, and then see how we were feeling. Maybe hit the Knife Edge, maybe turn back.

Besides, Hunt was only about 5 miles to Baxter Peak. Easy, right?

Oh, how wrong we were. 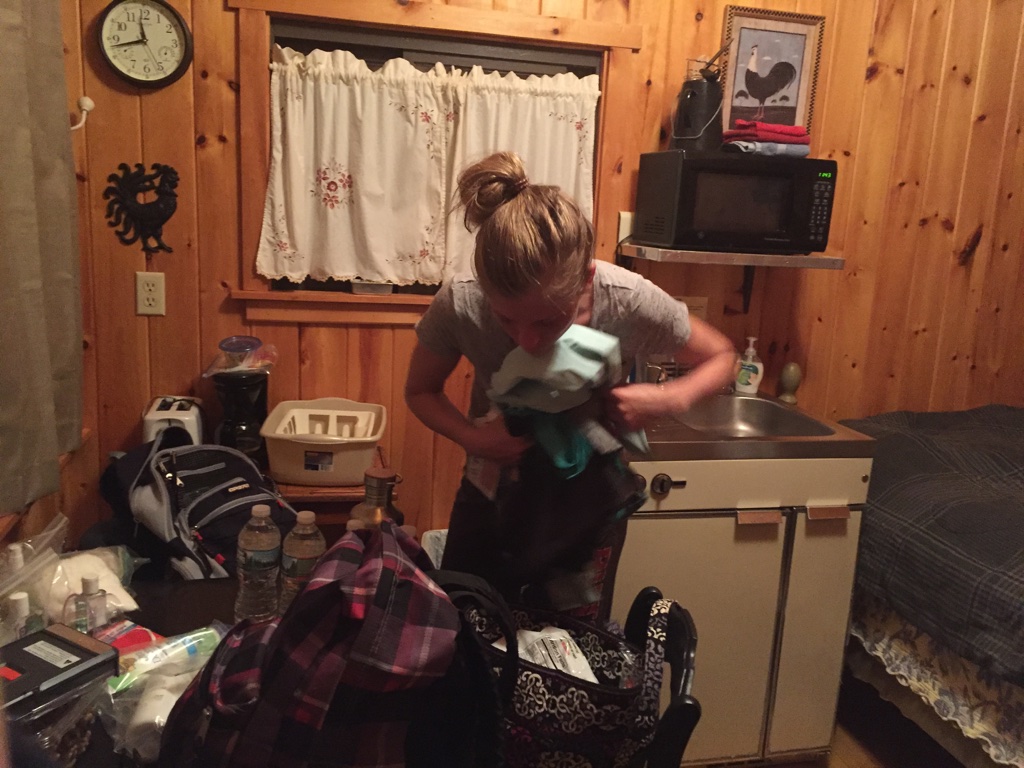 Packing her back for tomorrow’s hike, which we’d wake up for at 5am. Notice it’s nearly midnight.

Sunrise over the lake.