I first heard about Katahdin when Shar and I were planning to hike the Appalachian Trail a few years ago. The northern terminus, Katahdin marked the start – or end – of Maine’s daunting 100-mile wilderness. “Katahdin” sounded like some formidable crag out of Lord of the Rings, a place where hobbits might journey to destroy a ring. It sounded monumental  and important.

And we were going to hike it.

We ended up arriving at Katahdin Stream almost an hour later than we’d intended. (Are you noticing a theme? We’re not morning people.)

A ranger stopped our car at the gate and asked for our parking permit.

“Make sure you bring a flashlight with you,” she instructed. “And drop your parking permit in the box on your way out so we know you made it off the mountain.”

Well that was comforting.

Once onto the park grounds, we passed a small shop selling maps. It seemed wise to procure a paper map of the trail we’d be hiking, so we stopped in.

“Make sure you bring a flashlight,” the man at the desk told us. He then directed us out back if we wanted to take some gorgeous photos of Katahdin reflected in one of Maine’s mirror-flat lakes. Stunning.

Finally, we reached the parking lot, about 8 miles into Baxter State Park. We’d been told to check in at the ranger station before heading up, so we crossed a tiny stream and entered the station.

A kind-looking older gentleman with an impressive white mustache greeted us and asked if we were through-hikers. This made me feel proud. Did we look like toned, woodsy folk who could survive the perils of hiking the wilderness?

“Make sure you have a flashlight,” he told us, a phrase that was quickly starting to worry me. One of our biggest fears was getting stuck on the mountain overnight. We estimated we’d complete the trail in 8-10 hours, but if it took longer or we got lost – both strong possibilities – we could get stuck up there.

“Have there been any bears up there?” I asked as Shar signed us into the log book.

“Up here, not really. You might see them from afar, grazing. But bears stay away from the AT. Bears have a good sense of smell, and the AT is like one long road of human stench. They avoid that.”

This was relieving. I glanced at the log book. Shar had only written her name. I knew she was trying to dispose of me in the wilderness.

Before we left, the ranger gave us one last piece of mysterious advice:

“When you reach the monkey bars, try to remember the rocks you used for footing when you climbed up.”

What? Monkey bars? I imagined us monkey-barring over some vast ravine with other hikers slipping to their deaths. Oh well. Guess we’d find out.

It was with sunrise and optimism that Shar and I began what was for me the most physically demanding hike ever. At the start of the trail, there was another log book. We proudly signed our names and our start time – 7:30.

A nearby information board recommended that if we didn’t summit Baxter Peak by 12:30, we should turn back.

The first part of the Hunt Trail was crisp and piny. Below our sturdy boots, the ground felt springy and blanketed in pine needles, leaves, and stray sticks. A stream rushed past somewhere nearby. Eventually, we came out onto a log bridge that passed over the roaring stream. Through the trees, we glimpsed a waterfall. Life was good!

Crossing a stream? Or our path up the mountain? 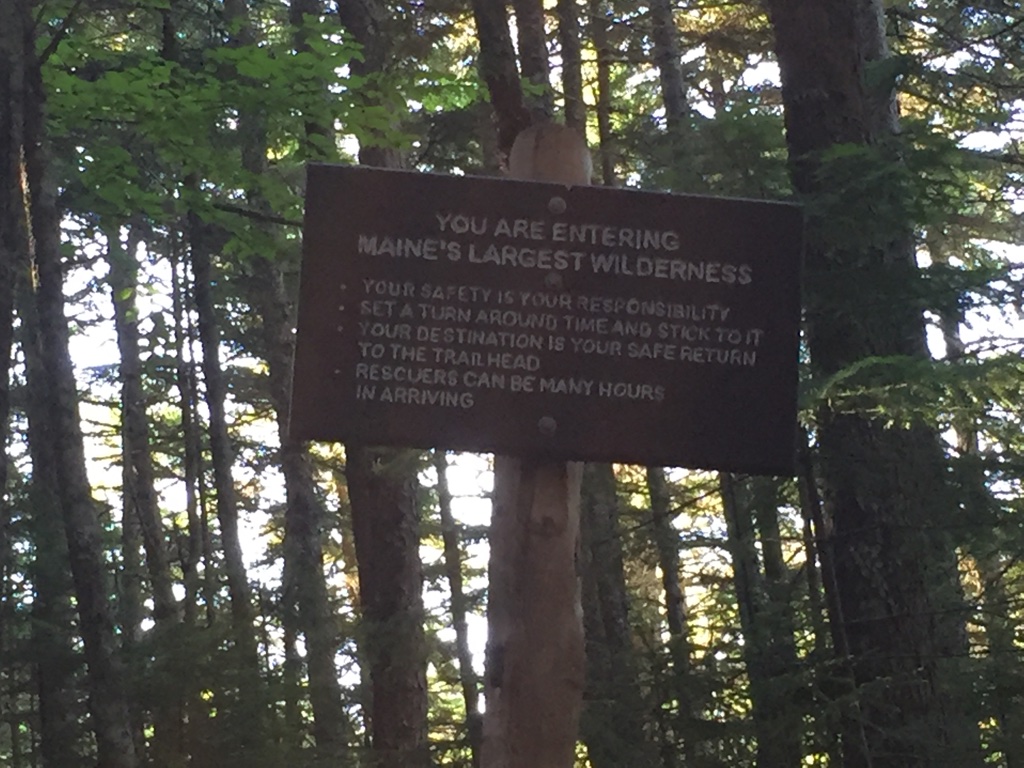 They’re not messing around!

And then the trail was rocks.

It began gradually – a large rock in our path. Then a series of large rocks, like stepping stones. Then large and small rocks you needed to carefully plod over.

Almost immediately, the trail began to slope uphill. We expected this; there was an elevation gain of 5,000 feet or so. (Half Dome was over 8,000, so we haughtily assumed 5,000 was feeble in comparison. Never underestimate nature.)

The thing was, the entire trail was boulders. At first, Shar and I found ourselves heaving and breathless, doubled over as we panted and climbed over these giant rocks. As time went on, we weren’t as breathless. My year of learning wall climbing in Manila was coming in handy; finding sturdy grips and footholds felt exhilarating.

Our trail eventually turned into a stream, and we hiked upward through this stream. The rocks were slippery, but our boots were solid. It was actually fun charting the best ways to climb up and over these boulders.

And then we were out of the woods and faced with a near-vertical boulder-filled ascent. It was here we encountered the monkey bars, not as daunting as I’d anticipated. The first one was a horizontal bar drilled into the rock. I threw my pack up and onto the ledge and hoisted myself over. The ranger had said we may need to help each other over, but we both figured it out on our own. That felt impressive.

This portion of the trail was all boulder and it was pretty exposed. Baxter State Park stretched out impressively beneath us, all the lakes and mountains rising up so far below that they looked like pieces of a topographical map. God we were high up.

When we reached the top, we thought it was over, but no. The next stretch reminded me of Slieve League in Ireland, and from where we sat, it looked easy. Instead of a narrow hike up over boulders, the mountain sloped down on either side, a soft green.

More uphill hauling over boulders. At this point, I began to fret. How on earth was I going to get down? Going up and over was fine. I’d be facing the mountain and using my climbing skills. Why couldn’t someone just belay me down? Or, better yet, install a zipline at the summit? 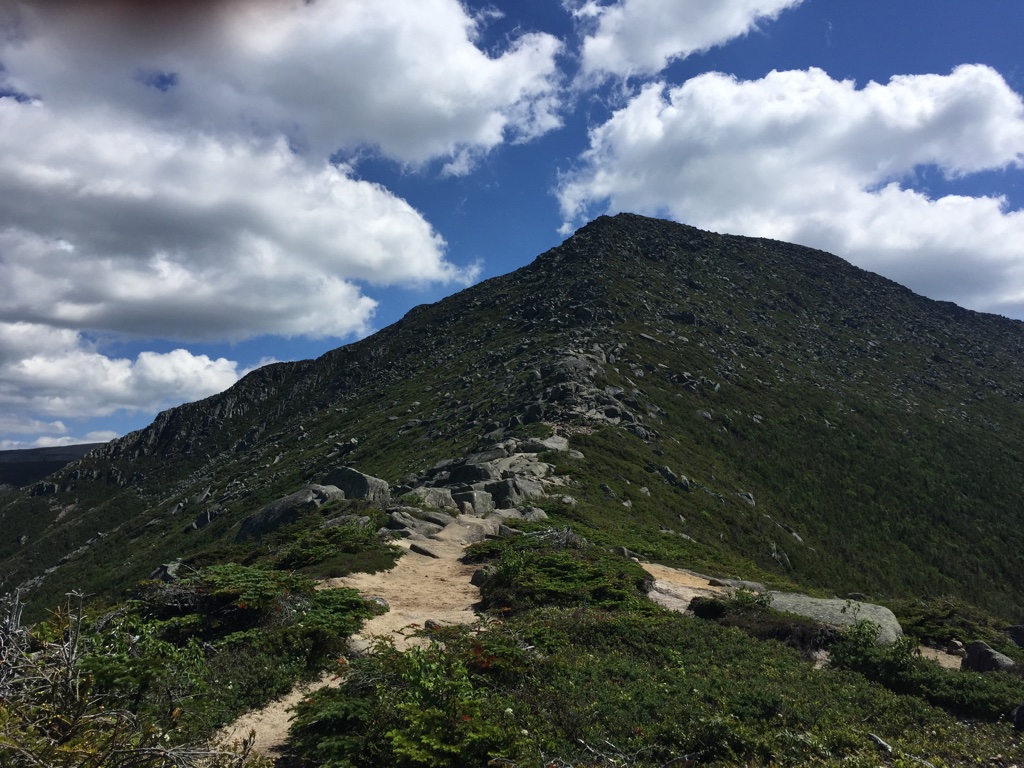 It looks easy, right? It isn’t.

We finally, finally reached the top of our rocky climb, only to discover that we still weren’t at the summit of Baxter Peak.

“The hard part is over!” exclaimed a cheery hiker. “The summit is over there, and this next part is practically flat! A gradual uphill!”

His friend, a heavy-bellied older man, was clambering over boulders downhill. Panting, I wondered how on earth I was so out of shape when all of these other people – old, young, fat, thin – were spryly weaving down boulders like Gollum.

As we plodded over a rocky and windswept plain toward the summit, I found myself thinking of Sam in Lord of the Rings (because I am a geek) and realized that I would be a really shitty companion on someone’s epic journey. If Shar had been tasked with destroying the ring and needed my help to do it, she would never have made it. She’d probably get as far as Mordor, but I would’ve died after crossing that farm a mile outside the Shire.

The summit did not seem to be getting closer. In fact, it seemed farther and farther away – and up another bloody boulder ascent!

“Why are people liars?” Shar wondered at one point. “The hard part wasn’t over!”

I so wanted to turn back out of anger. This was 5 miles? It felt like 50. Along the way, there had been no signs indicating how much farther to the peak.

When we finally scrambled up the last portion to the summit, it was 12:45. Yes, the views were sprawling and majestic. Yes, the wind felt good. So did the trail mix Shar had packed. We stuffed our faces in stunned silence, me absolutely knackered and dreading the descent. My left achilles was aching, and my right knee. Shar’s left knee was hurting.

We both swallowed some Advil at the top while elderly men skipped down the rocky descent with joy. A trail runner in an Ironman shirt practically bounced up the last portion, had a quick sip of Gatorade, and frolicked back down the mountainside.

Shar and I took in the views and had a few photos on the summit sign before beginning our hike down. A large grey cloud had covered the sun and we did not want to get stuck up there in the rain.

On top of the world!

I gave Shar the nickname “Surefooted Shar” back in Yosemite. She is spry when she descends, and swears it’s because our boots are awesome. They are awesome. But I am clumsy.

I am the slowest person to climb down a mountain with. Everyone passes me. In my head, I take it one step at a time, because worse than being slow is rolling an ankle or falling down the mountain and needing to be rescued.

It was a long and painstaking descent down, with Shar exhibiting saintly patience. Somehow, we did not get lost. We also applauded ourselves for carrying 2 liters of water each and staying hydrated; we’d made that massive error in Yosemite and had paid the price.

In the end, we completed the hike around 5:30pm, covered in black fly bites, sweat, dirt, and the glowing sense of accomplishment you get from climbing a mountain.

This merited some celebratory beers and nosh at Loose Moose, where a 2-person band covered bluegrass and folk songs and Shar and I shouted across our tiny table in attempts at conversation. We were both too tired to make any sense or understand each other, and sounded instead like two elderly deaf women.

Perhaps this is a taste of what’s to come years down the line.

We drove home in a record time of about 8+ hours the next day, somehow beating 4th of July weekend traffic. Our ride was filled with numerous coffees, humorous podcasts, and the promise of returning next year to hike the Knife Edge. Hopefully in better shape.