Kacey, Allison, and I had been anticipating Iceland for a few months. What better way to kick the post-Christmas blues than hop a flight to the icy north? As luck would have it, Allison found herself horribly ill the day before we left. I’m surprised she made it to the airport with us.

Still, we kept our spirits up by finding a posh little wine bar in Newark Airport. As a jittery flyer (that is one hell of an understatement), I find that a little wine calms my nerves. Kacey agreed.

“I’m worried about landing in the wind,” she confessed as the two of us clinked our glasses and Allison took a shot of Pepto-Bismol.

I knew Iceland would be windy. The last time I was there, the couple we’d stayed with in Dynjandi had told a story of how, on one particularly blustery evening, their SUV had been blown back down their driveway. Its parking brake had been on.

“They do it all the time,” I assured her knowingly, as if I’d suddenly become some wise pilot expert. (Wine will do that to you.)

It took a few glasses to calm our nerves, and by that time, we’d befriended the 5 other guys in the wine bar who were also going to Iceland. We decided we’d all meet up in Reykjavik for New Year’s Eve and excitedly boarded the plane. Kacey and I were so excited, in fact, that we thought it would be wise to order the red wine special: two small glasses of red wine for…some amount of money. We each ordered one and were very surprised when the flight attendant handed us each two medium-sized bottles.

When in Iceland though, right?

Kacey rocks her inner Lenny Kravitz at the airport.

The 4 hour-50 minute flight flew by (ha, ha) and soon we were gliding along Keflavik’s runway, the wind pommeling the plane. The pilot came over the intercom shortly after.

“Eh, we need to wait for the stairs to come. The new stairs are broken, so we will have to use the old stairs.”

Normally, I would’ve giggled at this, but I was not feeling very well at all. Neither was Kacey. Somewhere up front, Allison was seriously questioning why she hadn’t opted for a hospital before the trip.

We staggered down the windy steps and onto the bus, which delivered us to the airport terminal where Kacey said we’d need to spend 30 minutes before the car rental place opened. It was a groggy 30 minutes, where I tried to stomach a dry thyme bagel and a black coffee and we all stared at each other like zombies. I wasn’t sure how we were going to make it up to Stykkisholmur, our destination for the day.

When 7:30 rolled around, we shuffled to the information desk to inquire about the car rental shuttle.

“The shuttle is broken,” the man told us. “You will have to walk.”

He pointed us out the back of the airport, where a 7-minute walk awaited us. How bad could that be? I wondered slowly, feeling slightly nauseous.

The doors swung open and we stepped out into 45-mile an hour winds. It took me a minute before I could even walk, gasping to catch my breath. It’s hard to relate how powerful this wind felt. Imagine someone is punching you in the abdomen while simultaneously pointing a blow dryer in your mouth at full blast.

We bent into the wind and struggled forward, each step a minor ordeal. My Samsonite case, at 13 kg, was suddenly airborne behind me, parallel to the ground and soaring in mid-air. It was hilarious.

By the time we got to the rental place, we were wind-blown and very awake. Allison laid on the couch feeling ill while Kacey and I sorted out the car.

“Remember that when you open the door, you need to hold onto it, because the wind will rip it off,” said the man.

Eager, we signed off and hopped into the car, a handy little Kia Sportage, and zoomed off toward Reykjavik so Kacey could see if the Red Cross was open so she could buy a sweater. It was closed.

A magical greeting at Iceland’s airport! We look a lot happier than we felt!

The thing about Iceland this time of year is that the sun doesn’t come up until around 11, and it sets around 3:30. Apparently this affects store hours. So do the holidays, as we would discover later.

Exhausted, Kacey jumped into the passenger seat and I set the GPS for Stykkisholmur. Allison and Kacey immediately passed out and so I set off driving north out of Reykjavik by my lonesome, no chatter, no radio. (Radio stations are scarce in Iceland unless you’re near Reykjavik or Akureyri, and maybe one or two other big towns.)

It was dark and the weather changed frequently. I drove through wind, rain, sleet, hail, and a particularly unnerving white-out, where snow blew horizontally across the road and I couldn’t see anything at all.

When it was simply dark, though, Iceland’s rugged and staggering landscape stole my heart all over again. To my right were towering mountains, with snowswept rock faces. To my left was the ocean, choppy and steel-grey and hammering down on the rocky beaches. And even though Kacey and Allison were in the car, I felt entirely alone. There were no other cars on the road. Just me and Iceland and nature, at once terrifying and awing.

As I drove onward, I felt more and more lethargic. Every so often, Allison would wake up and ask, “Are you okay?”

Did I take this while I was driving? I am not sure.

Eventually, I turned it over to Kacey, and I fell asleep while she navigated up to Stykkisholmur, a small town with a population of 1,195. (This number is shocking in itself, because we spotted maybe 4 people the entire time.)

Our AirBnB was a cabin someplace off the beaten path, and we had no idea how to find it. We pulled into a restaurant parking lot and decided that lunch might be a good idea. The three of us yawned over two cheeseburgers and fish soup. I don’t know about the others, but I took zero delight in my meal. All I wanted was a bed.

When our waitress returned, I showed her the Air BnB info and she smiled.

“Oh, I know that,” she said. “My father-in-law’s brother owns that. I’ll get you directions. He’s at the bank now if you want to go meet him.”

We took the directions and hit the road. The road took us well outside of town and into the middle of nowhere, where the remaining directions were unclear and involved statements like, “Turn left at the farm” and “Go over the small hill.”

Of course, we got lost, but managed to corner a farmer as he drove off in his truck. He pointed us down the road a bit further and, miraculously, we found it! A small cottage in the middle of nowhere, the place barely looked like it could withstand the battering wind, but at least it had beds.

We crawled into them and took a long-overdue nap, lulled to sleep by the hammering moan of the gale-force winds. 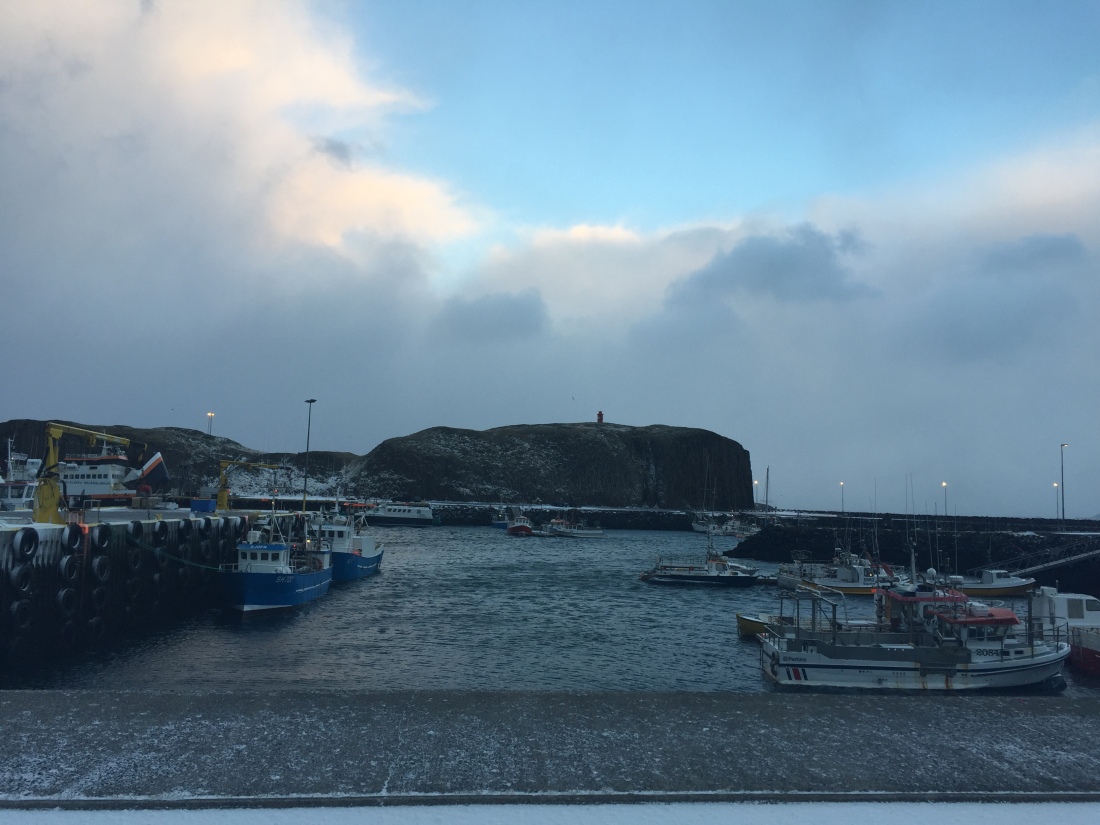 A moment of clarity as we arrive in Stykkisholmur. It was cloudy and windy nearly the entire day. 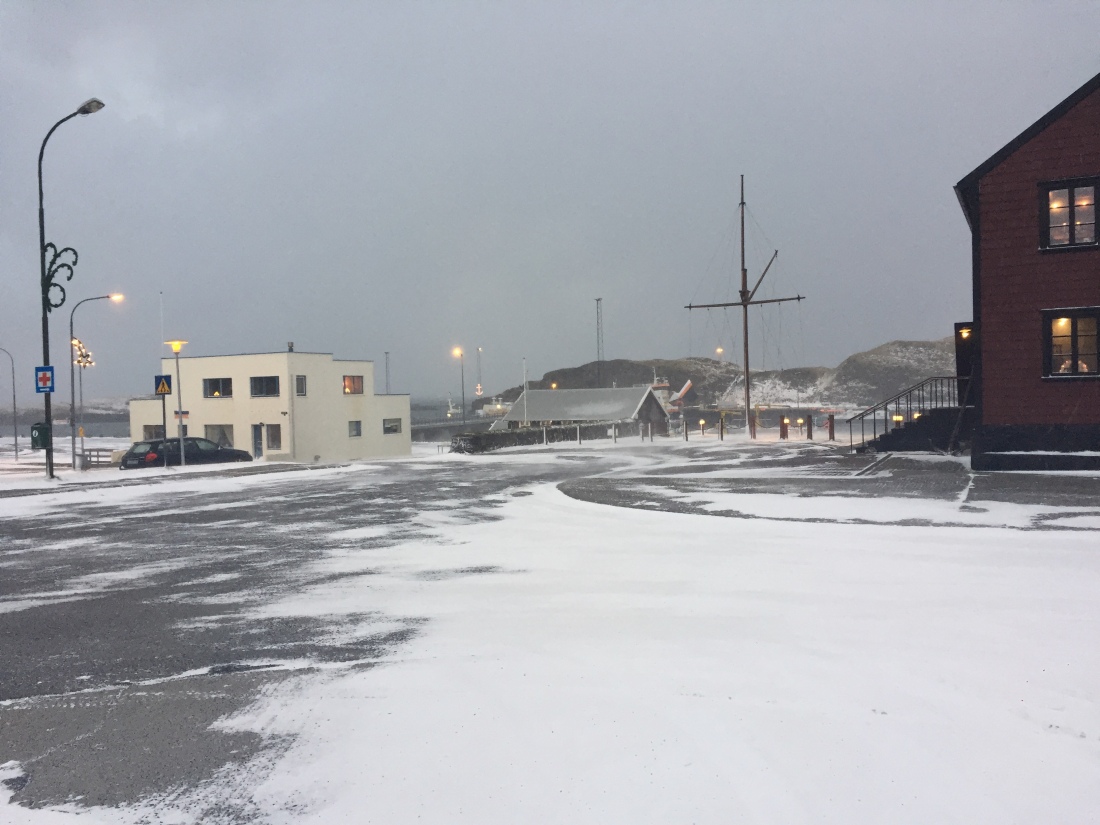 Stykkisholmur. This was our weather luck.

View from our cottage window of the other cottage in the middle of nowhere.