I had fallen in love with Iceland a few Aprils ago, because Iceland is unlike anyplace I’ve ever been. Iceland is like the Lord Byron of countries: equal parts stormy and charming, its frosty and enigmatic nature is irresistible.

Unfortunately, all Allison and Kacey had seen so far was the stormy side. I wanted them to be charmed.

We’d spent the night in our tiny cottage, which threatened to blow away in the wind at any second. Later, Icelanders would tell us how unusual this strong wind was for this time of year. All I could think about was how incredibly remote we were in that tiny cabin.

In stark contradiction to the remote, raw landscape we found ourselves in, our cabin boasted TV and excellent WiFi, which kept us entertained for the evening. I spent some time sitting on the bathroom floor – the heat in the cabin was poor, but the bathroom was toasty – doing crossword puzzles while Allison tried to sleep off her lurgi.

We hoped that the morning would bring a calmer wind, but it was just as fierce as we woke up. Our plan for the day was to drive around the Snaefellsnes peninsula and enjoy the scenery. As we headed into town to the only bakery at 8am, a driving rain fell. It was dark out as we drank good coffee and ate pastries. I tried two Icelandic donuts, klena and astarpungar, both delicious, especially when paired with coffee.

Sated, we headed back into town to climb the hill to Sugandisey lighthouse. Despite the pelting wind and rain, we tromped up the hill to the orange lighthouse and attempted to take photos and videos without our cameras – or ourselves – blowing away. The hill offered a pretty view of the harbor in the dark pre-dawn hour of 9:30am, and the lighthouse itself was pretty cool. 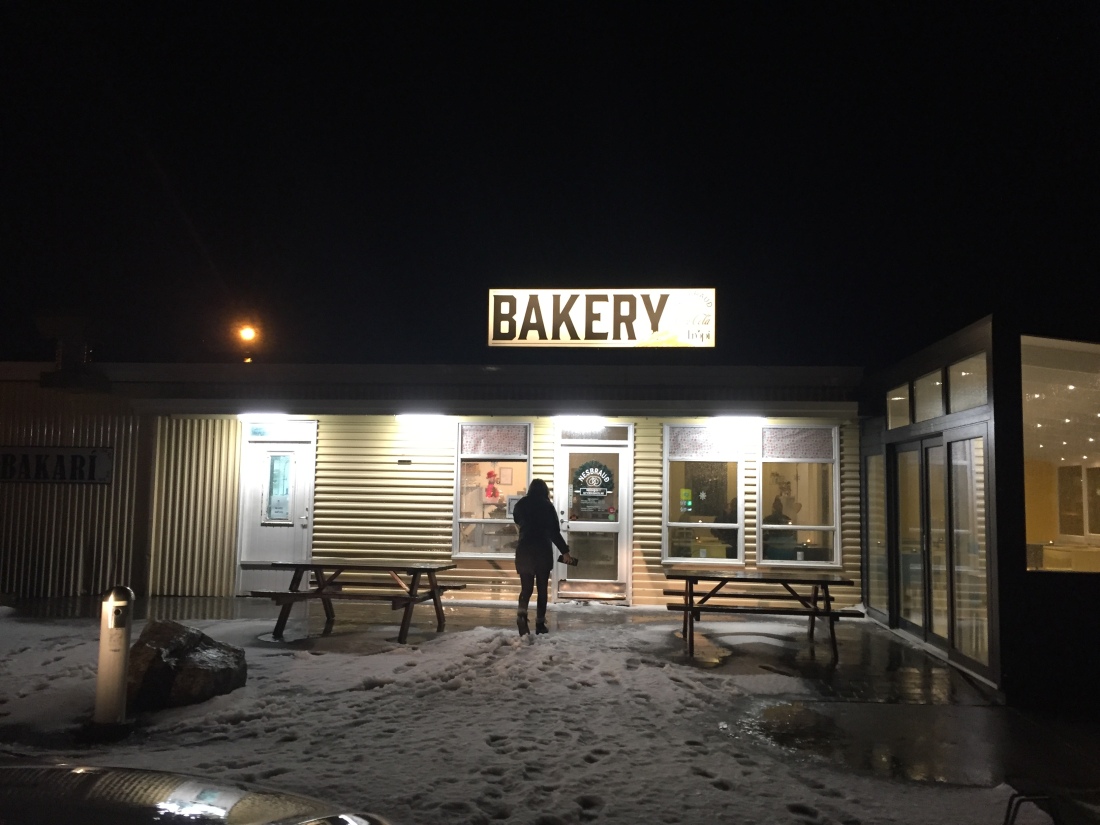 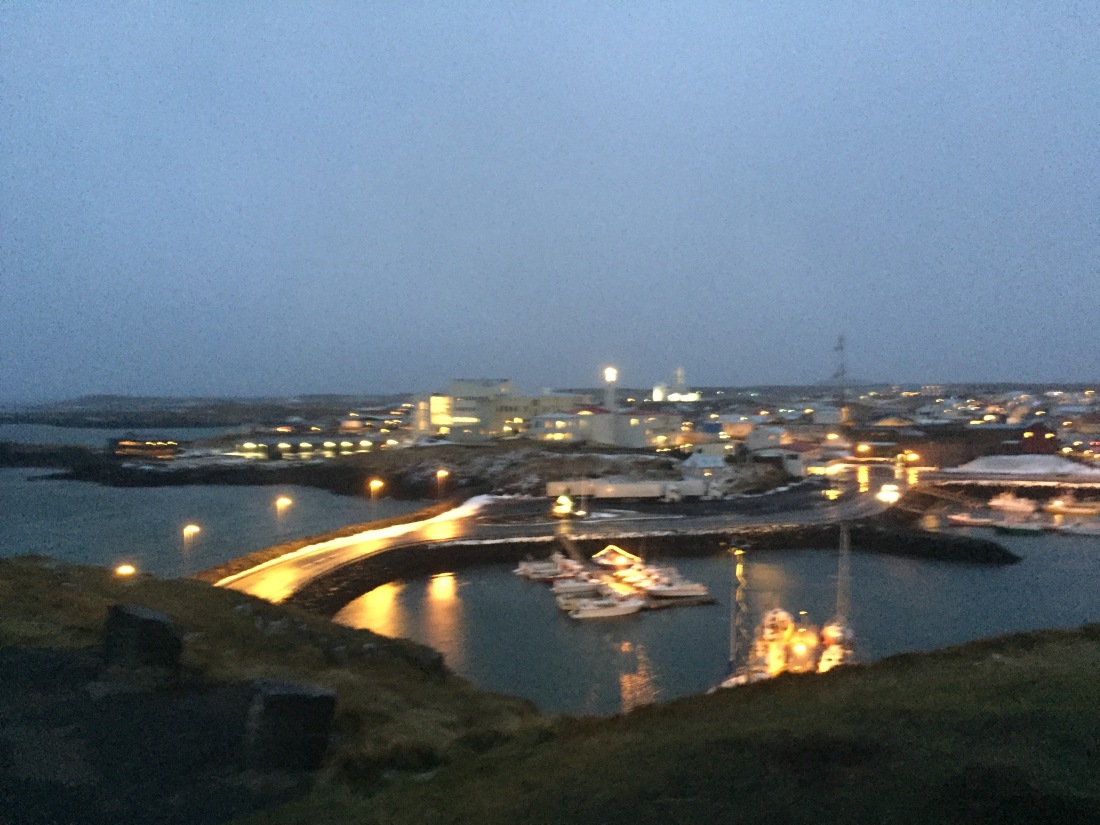 View of the harbor from the lighthouse.

Kacey snaps a photo. Yes, she is wearing snowboarding goggles.

Back in the car, we had an hour’s journey west to Kirkjufell. You would probably recognize this mountain from tourism posters. If you Google it, you’ll find a verdant cone rising up into the sky. It will remind you of some elvish kingdom in Lord of the Rings. Our photos are slightly different.

It rained the entire time. When we got there, the rain continued to pound down, so we ran from the car to the waterfall, snapped a few shots of the water being blown askew by the violent wind, then ran back to the car. It was a cold and wet ordeal, and I couldn’t help but feel a little disappointed at how poor the weather was.

“I read that the weather changes so abruptly here, but all we’ve seen is constant rain,” she said. This was true on both accounts. Allison didn’t seem to mind, but she was asleep most of the time.

Our next stop was the farthest west, Ondverdarnes, a beach. Because when it’s freezing rain and gale-force winds, you want to head to the beach.

Iceland boasts some pretty cool beaches. White sand is lovely, but volcanic black sand beaches are also pretty out of this world. As we headed off the paved road and onto a gravel stretch toward Ondverdarnes, something miraculous happened. Far ahead, a slit in the clouds opened up and sunlight poured through. Sun! 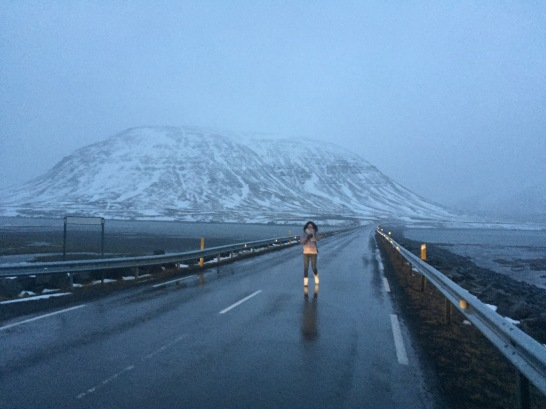 On the road again.

We imagined it would be short-lived, but no! There, two hours west of Stykkisholmur, we’d finally found some sun! The timing couldn’t have been better. We explored the beach area and a cluster of orange lighthouses. It was exactly the raw and charming Iceland I’d been hoping they would see.

We headed onward to the next beach, which was a bit more touristy. Djupalonssandur lures tourists to its sandy shores because it also boasts troll churches, iron scraps from the shipwreck of a fishing trawler in the 1940s (Iceland has a thing about leaving its wrecks alone), and lifting stones, a series of rocks along the beach that were once used to test the strength of potential sailors. If you couldn’t lift them, you weren’t fit for a life at sea.

Of course, this beach was packed with tourists. (To be fair, when I say “packed” here, I’m probably talking 20-30 people.) I missed the troll church, which was highly disappointing as I’d been out to spot elf houses and magical places along our journey.

At one point, I pointed excitedly to a colorful structure partially covered with grass. 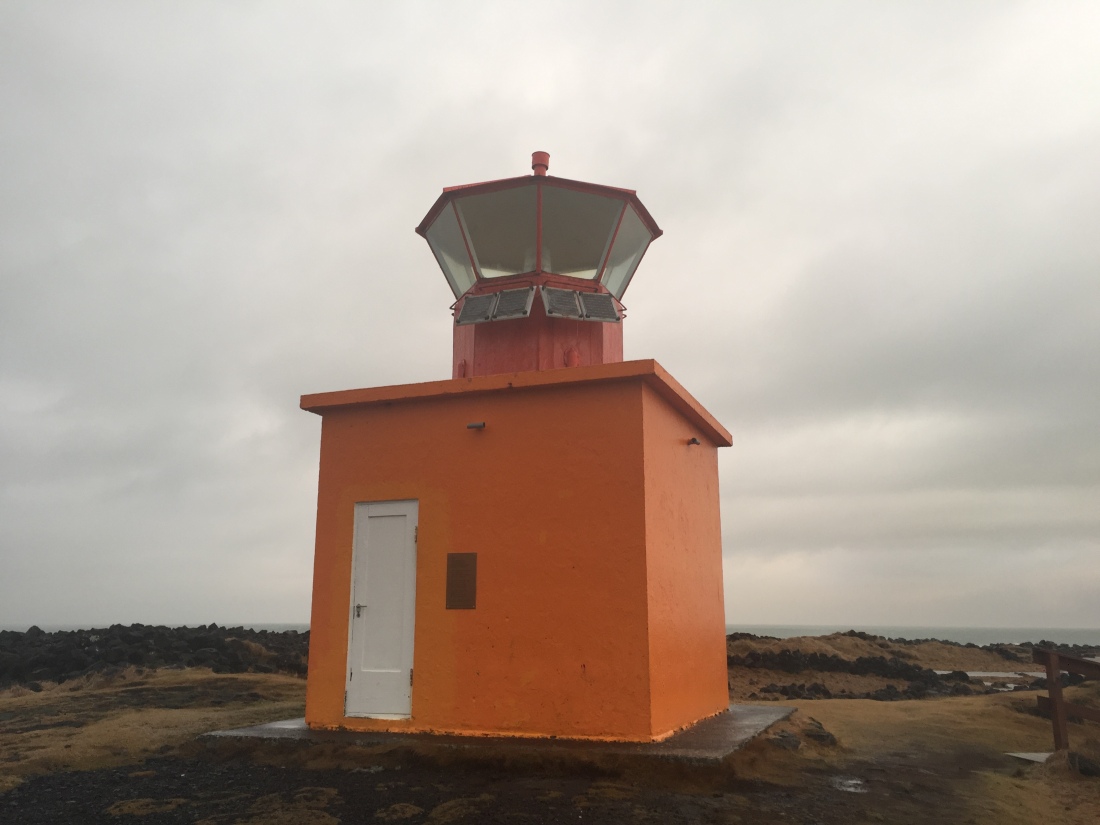 Iceland sure loves its orange lighthouses. 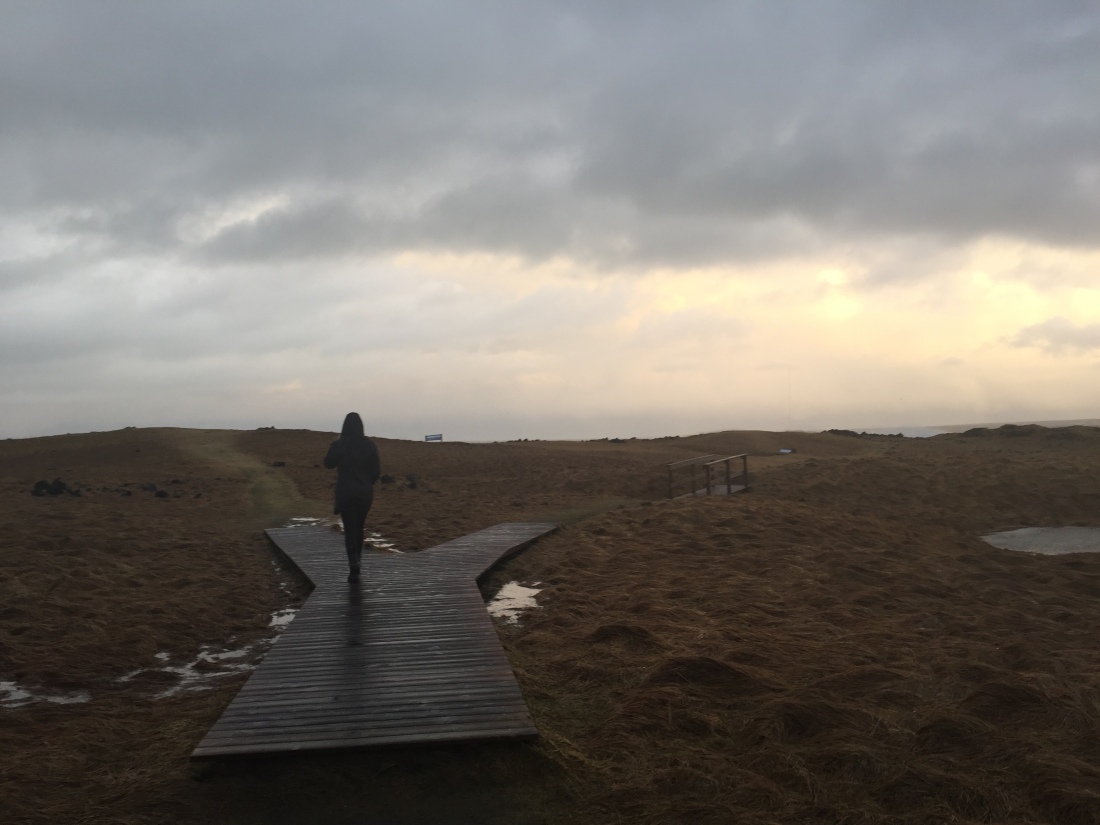 Fork in the road

A glimpse of Iceland’s wonder.

We’d made good time getting around the peninsula at this point and the sky was beginning to darken, so we headed back to Stykkisholmur. Along the way, we passed a field filled with ponies, so we pulled over to let Kacey and Allison take a series of selfies with them. Icelandic ponies are extremely friendly. As soon as they got out of the car and started calling to the ponies, they came over and allowed the two of them to pet them. Icelandic ponies are also fluffy and adorable, and make for excellent photographs.

The wind had died down to almost nothing at this point, and it was a calm drive back to town. We dined in the same restaurant, as all of the other ones were closed. We were the only people in there, apart from our waitress, the same woman who’d served us yesterday and who had seen us that morning at the bakery.

“It is almost all tourists here,” she told us. This was hard to imagine, given the empty dining room. I researched it later, and found that Stykkisholmur survives on fishing and tourism. I hope their fishing industry is booming.

I did enjoy fresh-caught salmon and a hearty Einstok ale, which was excellent compared to yesterday’s sleepy meal. All of us were in better spirits and returned to our cabin with hopes of catching the Northern Lights, which were supposed to be active that evening. 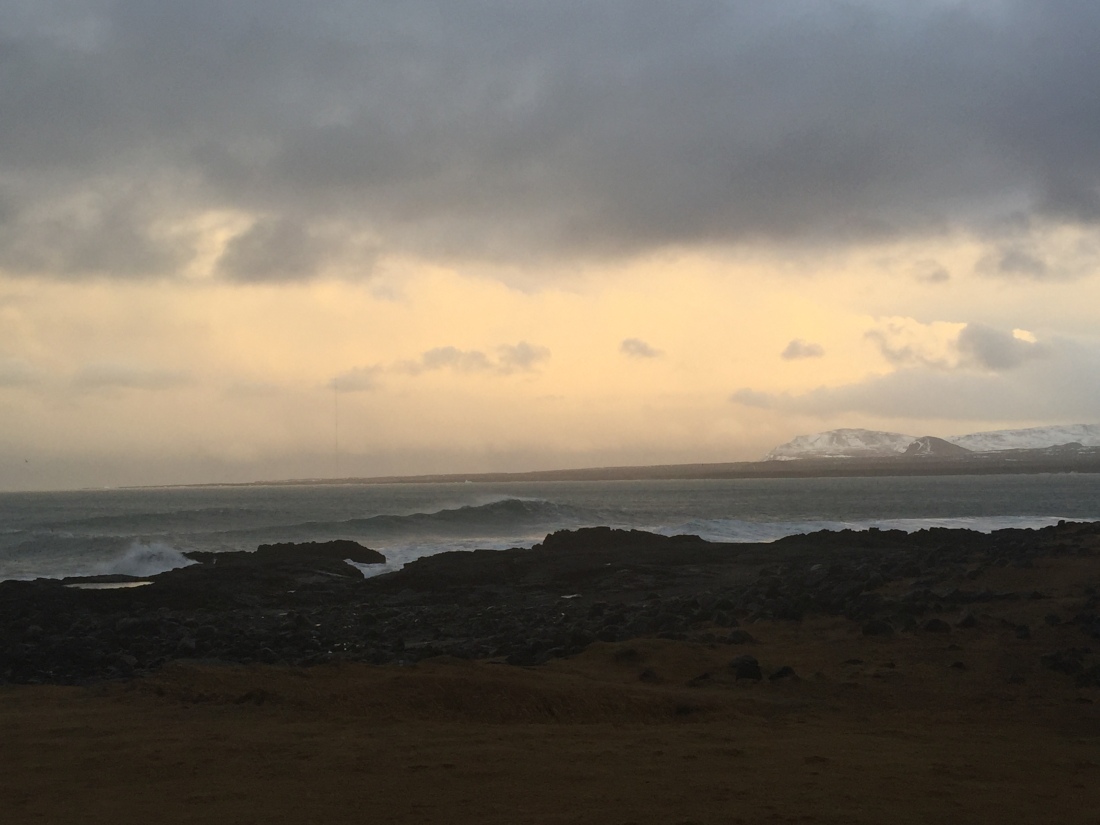 Waves crash. I would not want to do SUP on that sea. 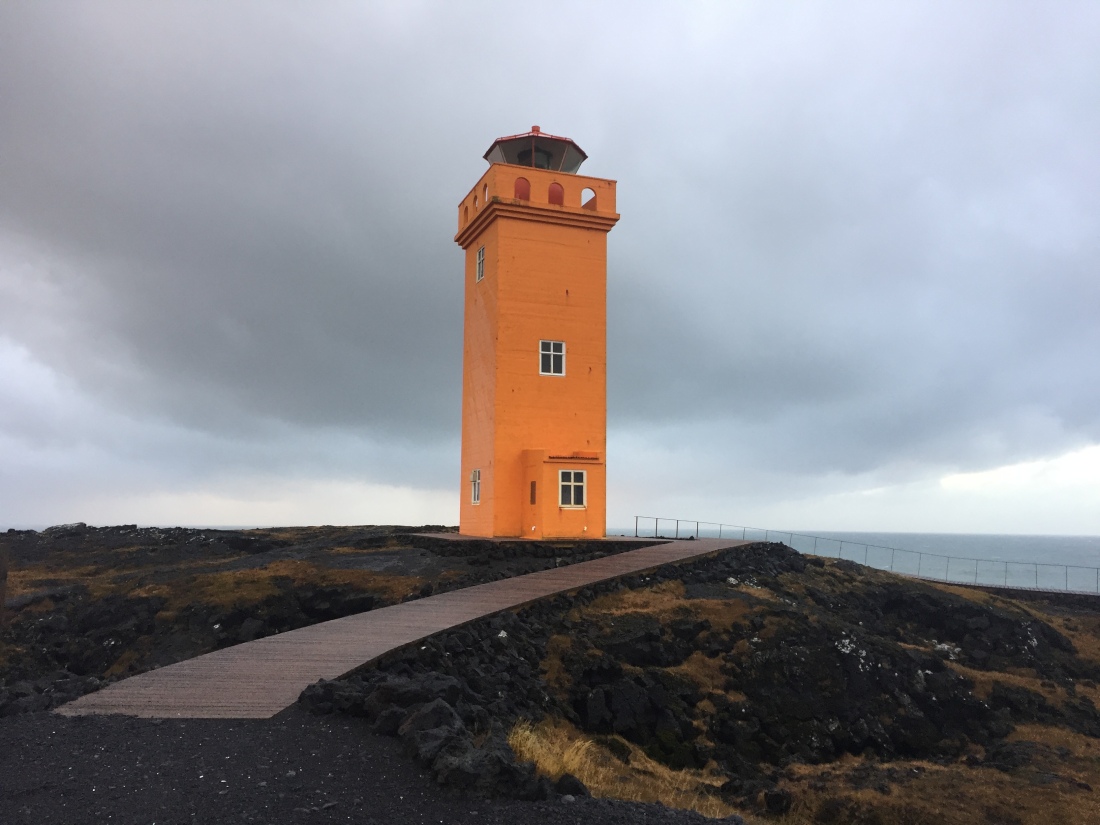 Another orange lighthouse? You don’t say!

Is that a troll church out at sea? 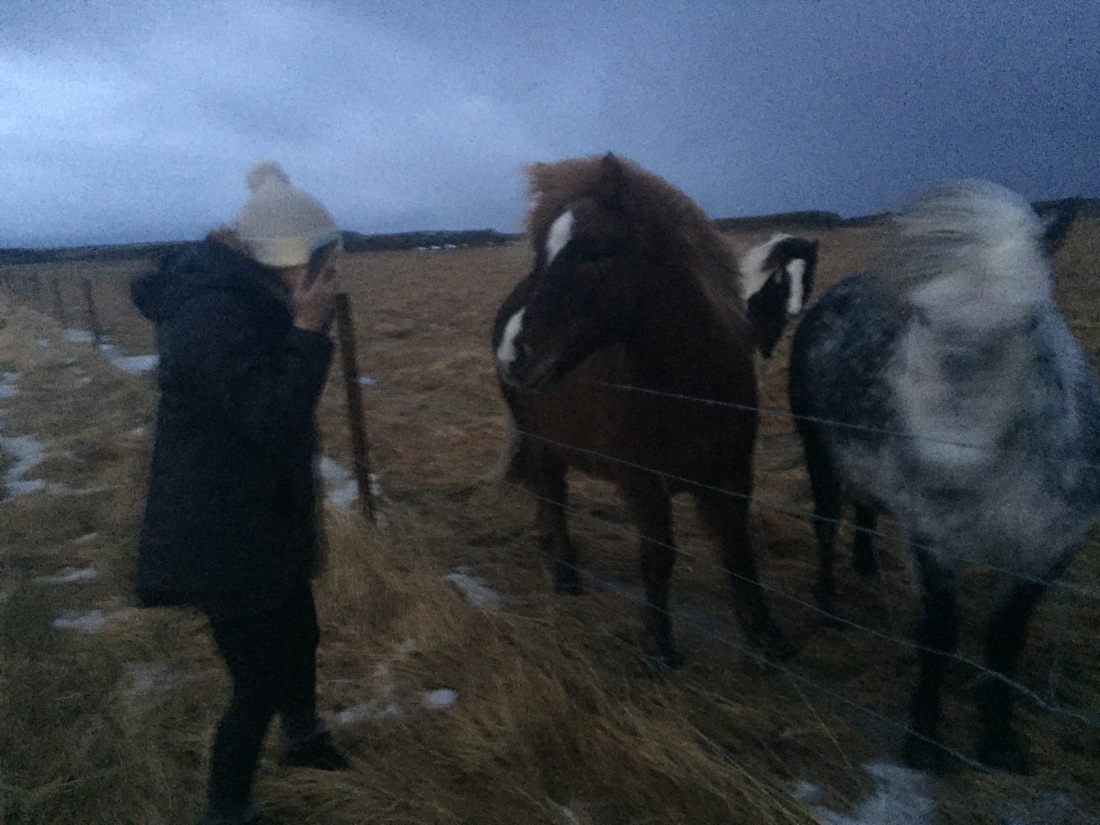