Planning a road trip out west must be fun. I wouldn’t know, since Laura and I don’t plan our trips beyond which states we want to drive through and approximately where we want to end up.

Matt drove me to Dillon around 11am to meet Laura for coffee and to transfer my 2 bags and fly rod into the ’91 VW van, Loretta. From there, Laura and I decided we’d find a national forest in Colorado to camp in and spend the night planning the rest of our trip from there.

We headed for Grand Mesa, but after noting the winding road into the park and the elevation, we decided to see if something better would crop up. After stopping at a few towns to gather food and other necessities, we found ourselves outside of a town called Rifle, where we changed our route to Vega Reservoir.

A state park, Vega would require a small fee, but boasted a good few campgrounds to choose from. A glance at the map showed a pretty crowded camp site near the welcome center, as well as another more isolated site on its own island in the lake.

Thrilled at the prospect of camping on an island, we pointed the van in that direction and followed the gravel road to where it wrapped around and spit us out onto our very own island!

“Is there really no one else here?” we asked each other incredulously. We found a large gravel parking lot – not the most refreshing place to plant bare feet – surrounded by a misty lake, shadowy mountains, and sweeping grass. No one else was there. The site was also used as a boat launch, but even the boats were already mostly towed in as it was getting dark.

All packed up and ready to go! 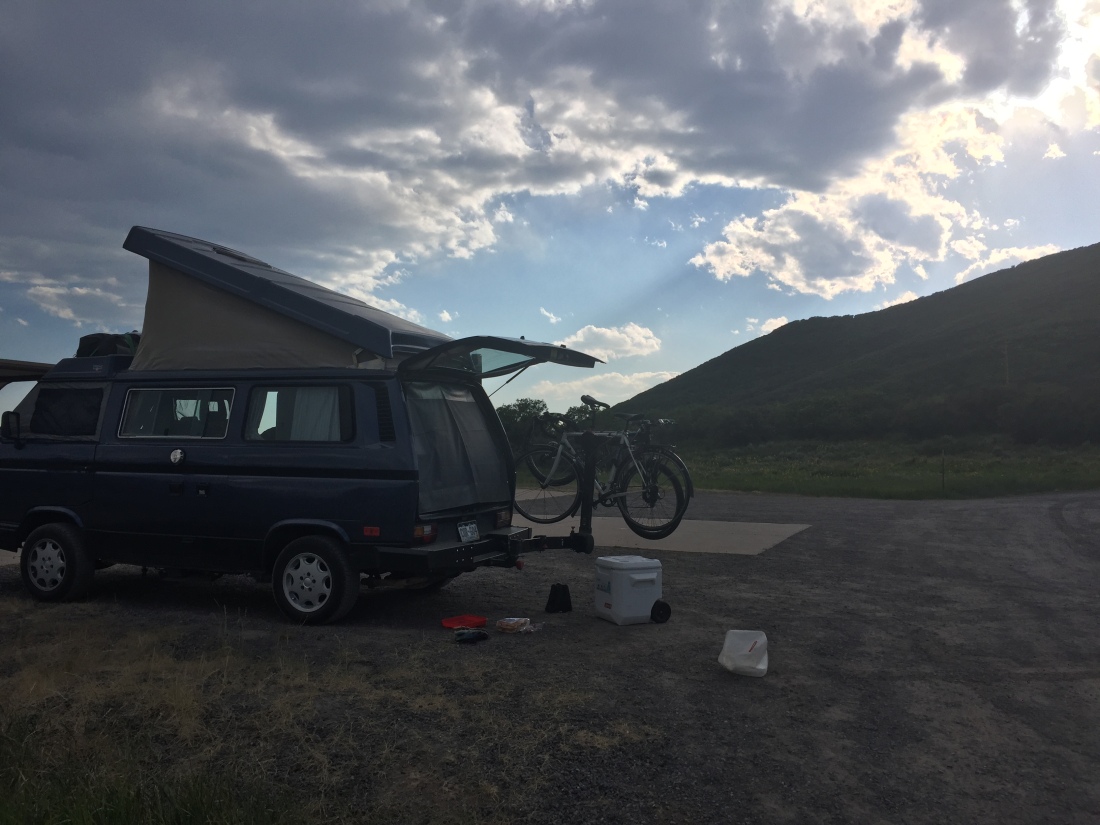 We parked the van and swung the door open to greet our camping site. The dogs jumped out and galloped wildly around. Laura and I smiled and inhaled a gulp of fresh air – and a dozen mosquitos.

“Of course,” Laura said, swatting the air. “We’re right by the water. Mosquitos.”

We had already put the dog food outside and begun setting up our gas stove, but the mosquito swarms were relentless. Hundreds of buzzing insects clustered together in great waves like some Biblical plague. I explored another slightly less exposed campsite nearby, but that, too, was overrun.

Deciding that the mosquitos would disappear after dark, we put screens on the windows and decided to pass the remaining daylight hours in the van with beers and guitars. Eventually, we had to bring the dogs into the van as well, and poor Olive was practically black from the mosquitos covering her back.

Every time we opened the door, a new cloud tumbled in and we spent the next five minutes clapping them to death with our hands or smashing them against the glass. At one point, the van looked as if it had witnessed a murder; blood was smeared across the walls and windows and our hands.

Luckily, once the sun went down, the mosquitos diminished.

We cooked our staple bison mac and cheese and planned our route for the next few days: a day or two in Utah, followed by multiple days in Idaho fly fishing, with a terminus in Portland, Oregon.

By the time we crawled into bed, I was actually tired. Our campsite was right next to a lovely bathroom – I’d joked earlier that we could sleep in there, as it hadn’t been penetrated by mosquito hordes – so I knew that even waking up in the night wouldn’t be so bad.

Until, about an hour after falling asleep, I awoke to the sound of something being scraped along the gravel beside the van. Immediately, my mind raced. Was it a murderer, scraping his hook-for-a-hand alongside the van? A bear? I had read on the garbage can near the bathroom that this area was home to some bear.

“Do you hear that?” Laura asked. “Something’s eating the dog food.”

Of course. We’d forgotten to bring in the dog food dishes and the tupperware containing the food. We would not do this again.

Laura clambered down and parted the curtains.

“It’s a raccoon. It’s going to eat all of the dog food,” she reported. “It got the lid to the tupperware open.”

“What else is out there?”

We paused and listened to the greedy raccoon devouring the food.

This she did, with no reaction from the raccoon – or the dogs for that matter. Earlier in the trip, when Laura informed me that the dogs were coming, she said, “I think you’ll feel safer having the dogs with us.”

Watching them snooze uninterruptedly while Laura banged on the van door was not reassuring.

She opened the door slightly and shouted at the raccoon. Nothing. She threw an empty beer bottle at it. Nothing.

Neither of us knew what to do. If we opened the door and ran at it, what if it charged us? What if it was rabid? What if it got into the van?

Before we could follow that train of thought, Laura shrieked.

“Oh my God, it’s trying to get into the window! Help me!”

I finally crawled out of my sleeping bag to be useful. The raccoon, unable to open the cooler, had climbed on it instead and was now scratching at the screens we’d put over the passenger window. Laura grabbed a beer bottle and beat it through the screen, though it continued to push inward.

I took the bottle from her and beat the raccoon while she rolled the window up slowly. Finally, breathless, we sat in the van listening to the malicious rodent circling and planning its next attack.

We decided to turn the van on and honk the horn, and if the raccoon ran off, we’d take the opportunity to pull in all of the dog food and the cooler.

For once, we were successful. I watched the raccoon watching us from the bathroom, its mangled shadow looking more like a mutated possum than the fluffy raccoon I’d been picturing.

Once we’d dragged everything in, rolled up the driver side window, and locked the doors, we shared an adrenaline-fueled look of relief. Disturbed, Chaska finally woke up and yawned, looking to Laura for some love.

“Yeah,” Laura told her, petting her furry head. “You fucked up.”

I wish I could tell you that that was the end of it, that we scored a cozy night sleep, but we did not. All through the night the raccoon returned to torment us. It flipped through whatever pots and pans we’d left outside, it dragged things around the van and sounded for all the world like a person. (At one point, Laura woke up and called out, “Who’s there?” because it sounded so much like a human.)

Around 3 am, we awoke to scratching on the canvas top we were sleeping under. Its hunched shadow was etched on the canvas in the low light, right there on top of the van with us. We beat it with pillows and hoped it would go away.

I have never wanted to kill an animal until that moment.

And so passed the first night of our camping trip. 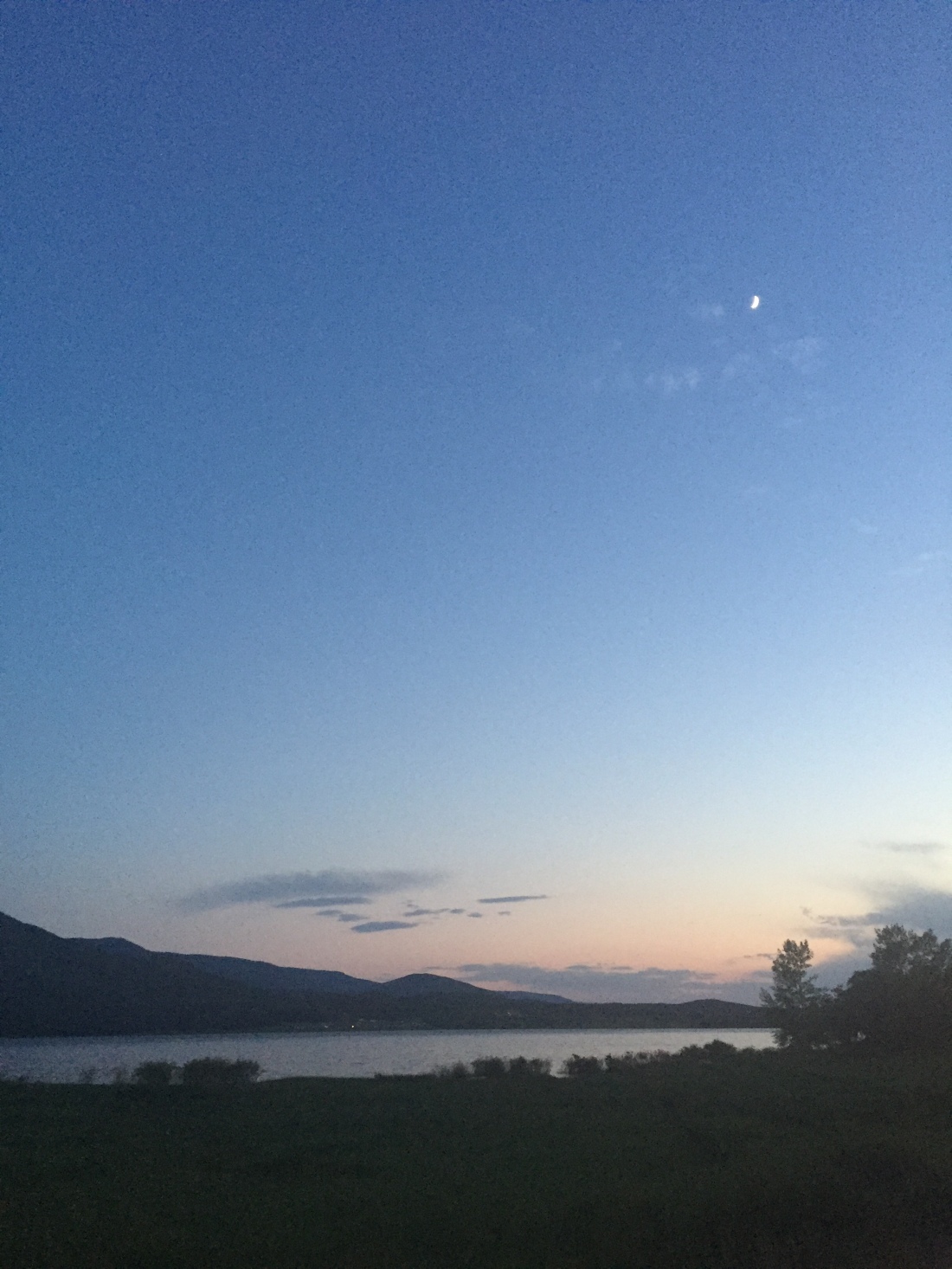